Adelaide remains hopeful star wingman Paul Seedsman will play this year after he returned to Victoria to seek help dealing with his lingering concussion issues.

Paul Seedsman has returned to Melbourne to see specialists as he continues the concussion battle that has sidelined him since December.

The 30-year-old Adelaide wingman spent several weeks in Victoria from late last month to help better understand his issues, which stemmed from a knee to the back of his head during a pre-season marking contest.

He is dealing with symptoms that have restricted him to jogging laps at training.

Seedsman had also been wearing sunglasses to help with light sensitivity.

Adelaide has not put a timeline on the ex-Collingwood player’s return but is hopeful he will be available later this campaign.

“I’m not going to make any huge statements around that,” Crows coach Matthew Nicks said.

“This is a really delicate area that we’re working with and none of us are experts in, but we have the experts working with him at the moment.

“He was back (in SA) last week and we sat down and had a good chat about where he’s at.”

Nicks said it had been a challenging time for Seedsman, who had his best season last year, finishing third in the Crows’ best-and-fairest and getting chosen in the All-Australian squad.

“He’s making some steps forwards and there’s a few, little setbacks here and there,” he said.

“Hopefully we see more of those steps forward than those little ones backwards.”

Seedsman has played 83 games for the Crows since joining the club ahead of the 2016 season.

The Victorian is contracted until the end of 2023. Paul Seedsman has returned to Melbourne to seek advice on his concussion issues. 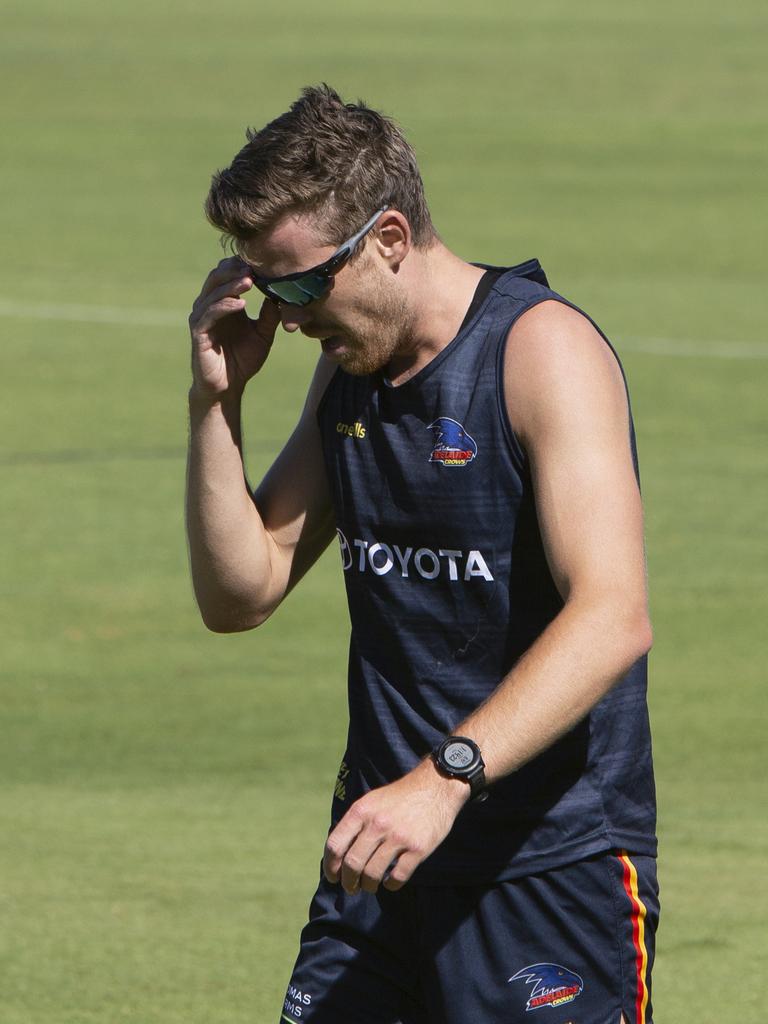 Paul Seedsman trained in glasses designed to help his recovery.

WHY CROWS ARE READY FOR GIANT TEST

Adelaide coach Matthew Nicks has backed his counterpart Leon Cameron to turn things around at GWS and expects the Giants to provide a tough test for his in-form team on Saturday.

Cameron is under pressure in the final year of his contract after slumping from a semi-final in 2021 to a 1-5 start.

Nicks, who was senior assistant under Cameron at GWS before taking on the Crows’ job at the end of 2019, said his ex-colleague had his full support.

The Adelaide coach remained wary of his former side because of its talent and the result when they faced off at Adelaide Oval this time last year.

Like this season, the Crows entered that match 3-3, while GWS was 2-4. 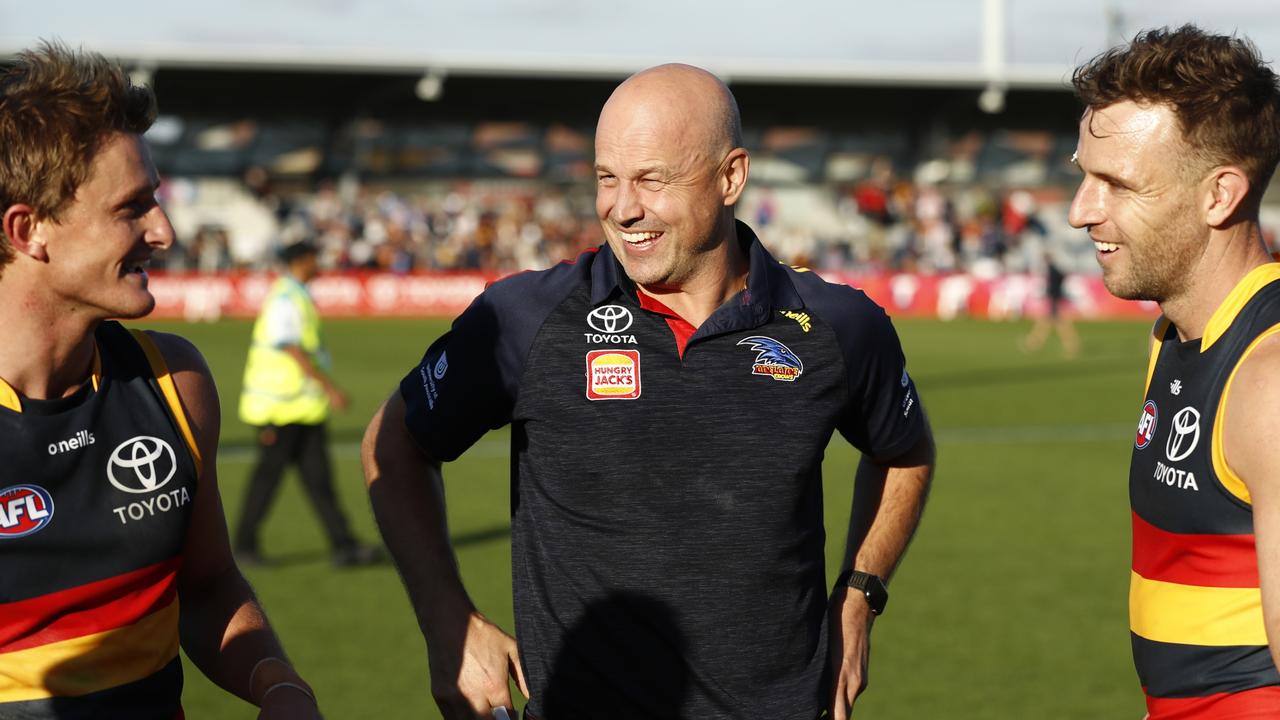 Matthew Nicks, with Matt Crouch and Brodie Smith, after the win over the Bulldogs. Picture: Darrian Traynor/Getty Images

But the visitors inflicted the biggest defeat of Adelaide’s campaign, by 67 points.

“We expect them to come and fight as they did last year,” Nicks said.

“They’re an incredible outfit and I’ve been lucky enough to spend some time with Leon.

“I know exactly what they’re going to bring this weekend and they did that last year to us.

“It’s going to be a really good challenge for us.

“I learnt so much from Leon in a short period of time and I know he’s got support for me as well.

“When the time’s right I’ll reach out and touch base with him.”

Nicks said his side was better and more mature than 12 months ago.

“That doesn’t mean the result doesn’t change from last time,” he said.

“Last year we got a lot of things wrong.

“I’m confident we’ll get those things right from a structural point of view, then it’ll be about do we bring the fight to match it with them.” 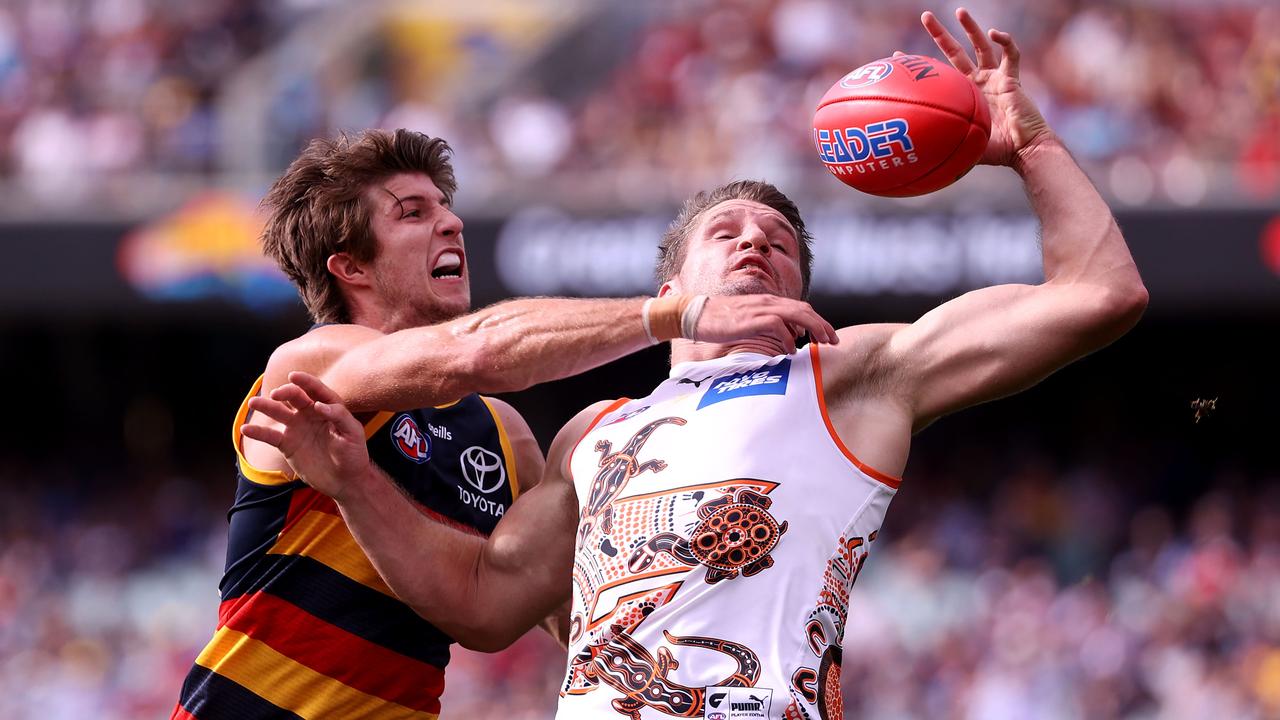 The Crows enter the game with an unchanged line-up after their impressive one-point win over the Western Bulldogs in Ballarat.

“They (the 22) played some really good footy last weekend and deserved to go again,” he said.

Adelaide has won three of its past four matches, boosting the team’s confidence, according to Nicks.

Rarely have the Crows entered a game as favourites in his three seasons at the Crows, but they will do so on Saturday.

It took just one day after his knee surgery for Adelaide captain Rory Sloane’s attention to turn to coming back in Round 1 next year.

Sloane’s season ended when he ruptured his anterior cruciate ligament against Richmond on April 16 then he went under the knife last week.

Although he was hurt in an innocuous incident, the 32-year-old knew immediately it was serious because he felt a pop inside his right knee.

The midfielder was initially a little shocked, having always taken care of his body. 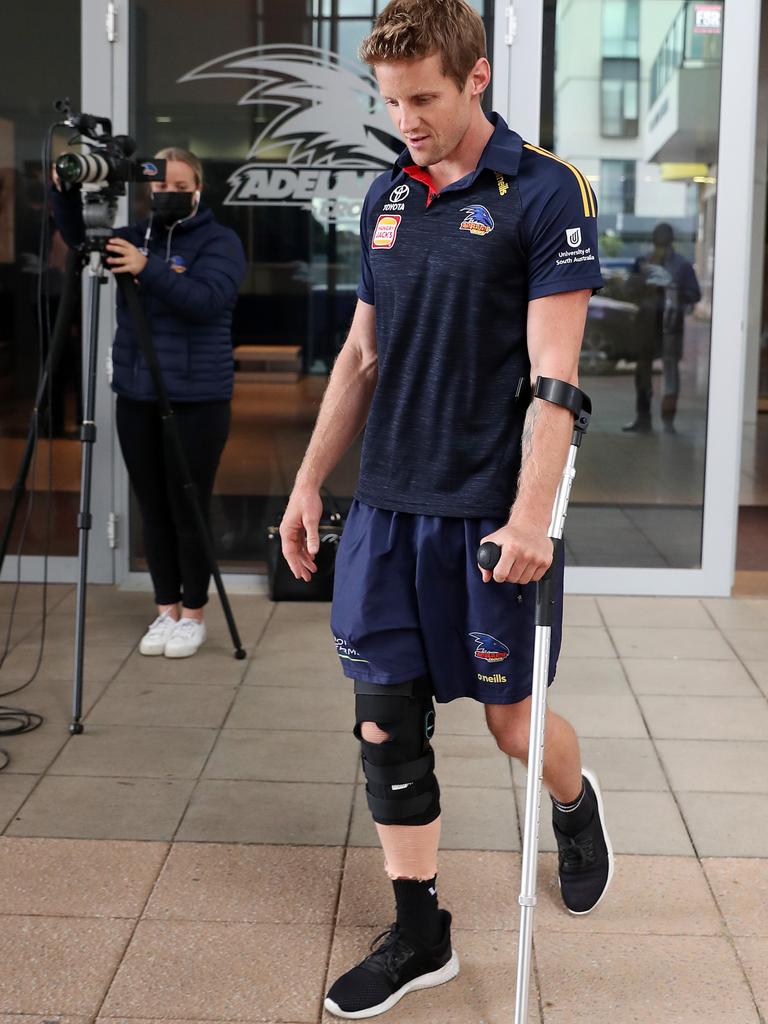 Sloane speaks to the media after he prepares himself the journey back.

But once scans confirmed the injury, he began thinking about the road back to playing.

“I knew coming off the ground it was the last time for the year, so that was probably the hardest bit,” Sloane said.

“You just look around at the fans, that atmosphere, the environment and the guys after a really solid, hard-fought win against Richmond, that’s the stuff I love about footy, but it’s also the driving force of why you want to return fitter than ever.

“The scans reaffirmed (the rupture) but by then I’d already processed it.

“I was already thinking about it being a great opportunity to freshen up, get the body right and launch into next season.

“Immediately your thought process just goes to ‘what can I control? And ‘how’s this going to look on return?’ And that was the goal from the day after surgery — how I’m going to best prepare for Round 1 next year.”

Sloane, who is contracted until the end of next season, is expecting to part with his knee brace in three or four weeks.

He is having to get used to not being out on the field.

“As frustrating as it is watching footy, I certainly enjoyed seeing the boys get that win in Ballarat (against the Wester Bulldogs on Saturday),” he said. Sloane believes the injury gives his body the opportunity for a complete reboot before next season. Picture: Getty Images

The football community, including many players who have ruptured their ACLs, have reached out to Sloane to pass on their well-wishes and advice.

He will consider sitting on the bench or moving into a coaching role during his time out.

“That’s going to be my focus for this year — how best can I help this team out while I’m not playing,” he said.

In the meantime, he has been recovering at home, typically on the couch or taking plenty of photos of his two children, as his wife, Belinda, and mum, Sandra, do simple things for him, such as making coffees.

“It’s pretty nice to be able to spend this time watching them (sons Sonny and Bodhi) grow up,” he said.

“Sonny gets it, he’s trying to kiss my knee better at times, which is really cute.”

Young Crow given all clear – but when will he be back?

Adelaide’s 3-3 start to the season is a pleasant surprise to Billy Frampton.

“You’d absolutely take it (at the start of the campaign),” the Crows’ key defender said.

“And to be within a kick on two other occasions as well, so it’s been a pretty good start for us.

“I’m pleasantly surprised at my end.

“But the way we’ve played and way we’ve been training gives us a lot of belief we should be around the mark.”

The Crows moved to 10th spot on the ladder after notching a third win in four games, beating last year’s runner-up the Western Bulldogs by one point in Ballarat on Saturday.

It was their best road victory in Matthew Nicks’s three years in charge and one of the standouts the club’s rebuild began in 2020. “We’ve had a few good ones in the past couple of years,” he said.

“But in terms of opposition and the way we were playing and being able to wrestle back a bit of momentum, I thought it was really impressive.”

Frampton also rated Saturday’s thriller against the Bulldogs as his best AFL performance.

He had a career-high 26 disposals, including 10 intercept possessions, along with nine marks.

Stuck on the fringes since being drafted by Port Adelaide with pick 84 in 2014, the 25-year-old has found a home in defence.

He was switched there against Essendon last season after previously being a forward and back-up ruckman.

Frampton, who has played 22 matches in total, will equal a career-best streak of five consecutive games when Adelaide hosts GWS on Saturday.

“I get to see the game from a different angle down at that end of the ground,” he said of lining up in defence.

“I’ve really enjoyed the switch and it sort of opens up how I want to play.

“Each game I feel like I’m on the edge and I always have something to prove.

“It’s taken a while for me to get here so I’ll keep doing what I can to hold onto that (spot).” 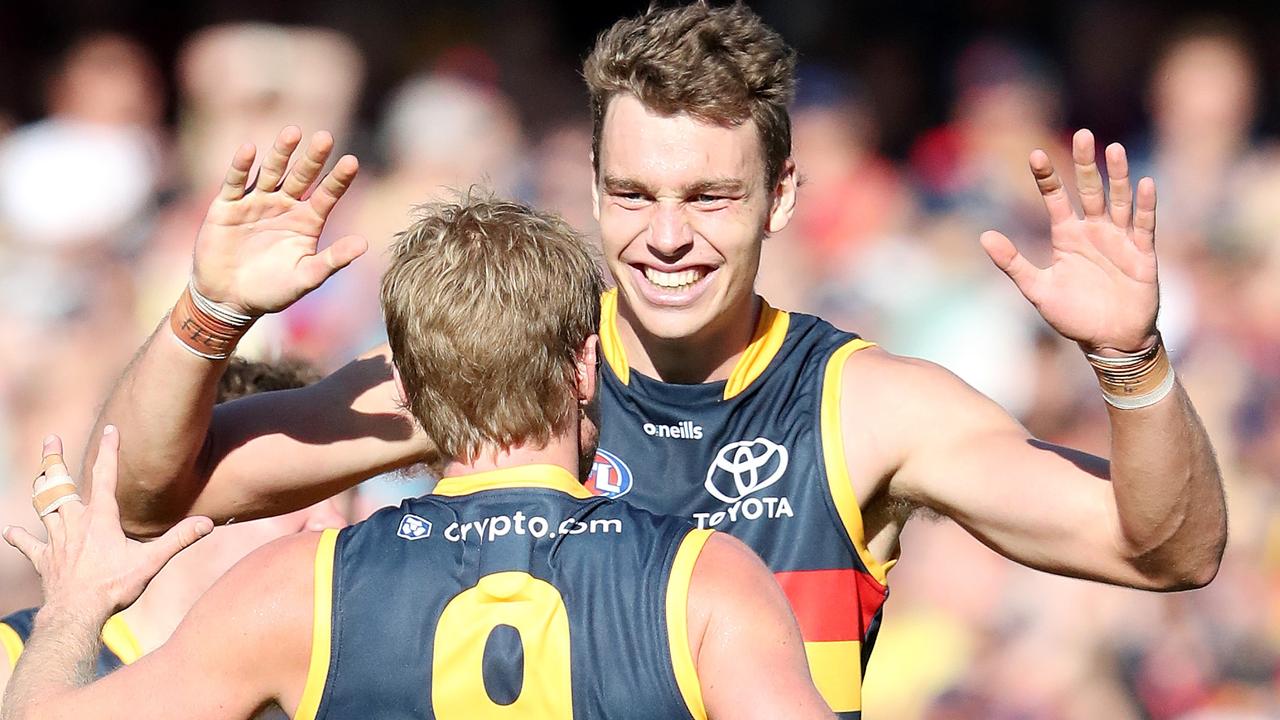 The 19-year-old forward finished the Crows’ SANFL game against Central District on crutches after coming off with knee soreness during the second quarter, but scans had cleared him of structural damage.

Thilthorpe has not been ruled out from playing this weekend and will be tested at training before his availability is determined.

He last featured at AFL level in the opening round and was then dropped.

The 2020 No. 2 pick had kicked two goals on Saturday before leaving the field.

Defender Andrew McPherson will also have a fitness test at training as he returns from a hamstring injury.

Crows rehabilitation boss Tim Parham said McPherson, who had not played since Round 1, was tracking well.

“He’s been fantastic in rehab and we anticipate he will train fully on Wednesday,” Parham said.

“He’s doing some really good stuff in the gym and has attacked it so he’s in a good position to return to play.”

Captain Rory Sloane is expecting to increase his movement in coming days as he recovers from anterior cruciate ligament surgery.

“He’s missing being around the boys and at the club but at the moment he’s recuperating on crutches and gradually progressing his movement,” Parham said.

First-year midfielder Zac Taylor is one or two weeks away from coming back from a broken thumb.