AFL 2022: All the Adelaide Crows news leading into the Round 9 clash with Brisbane

Reilly O’Brien confirmed his omission on Thursday morning but now the full team is and he’s not the only surprising change. See the Crows Round 9 side and have your say.

As The Advertiser forecasted on Wednesday, O’Brien, key defender Billy Frampton, midfielder Harry Schoenberg, forward Lachlan Gollant and wingman Brayden Cook all paid the price for the Crows’ 48-point away loss to Carlton on Sunday.

Five of the six inclusions were also as predicted: Strachan in for his fourth AFL match, Brodie Smith and Ned McHenry back from concussion protocols, and spearhead Darcy Fogarty and on-baller Jake Soligo being recalled. 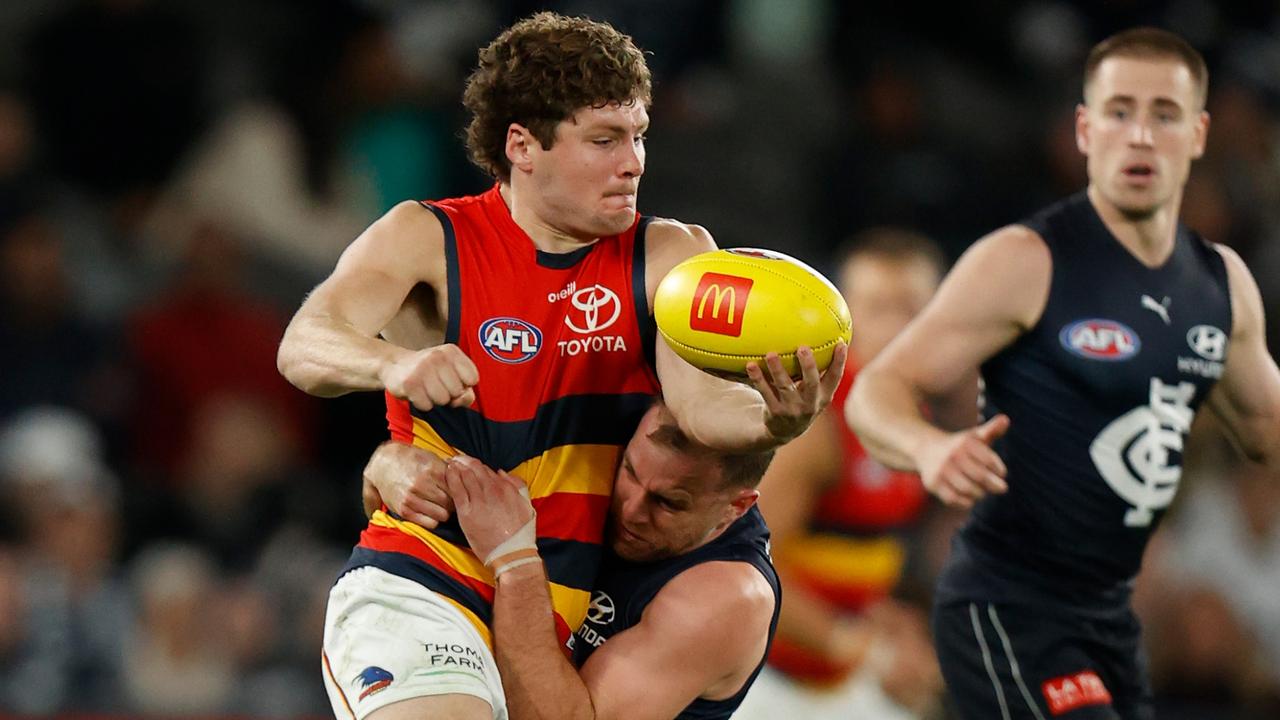 Harry Schoenberg has been dropped for Round 9. Picture: Michael Willson/AFL Photos

O’Brien, the club’s 2020 best-and-fairest winner, has been down on form this season, including the past fortnight.

The 26-year-old received three coaches votes after the thrilling win over the Western Bulldogs in Round 6 but was beaten by GWS ruckman Braydon Preuss and makeshift Carlton duo Tom De Koning and Jack Silvagni.

In the latest two games, O’Brien has taken just one mark. He was told of his axing on Thursday and had sensed it was coming after talking to the coaches.

“You can sort of smell it and you walk past in the corridor and go ‘I’m not getting a good vibe there’,” O’Brien told SAFM. “Bit disappointing after a bad couple of games, but I will be back hopefully as soon as possible.

“It’s all part of football so you move on and get on with it.”

O’Brien said he understood the decision.

“You can soon and mope around and say ‘why me?’ And blame others,” he said. “Or you can just stay positive and get on with it and focus on what you can do to get back in the team.” Reilly O’Brien sensed he would be dropped for this weekend’s match. Picture: Mark Brake

Kelly said O’Brien had produced some strong performances this year but not been as consistent as recent campaigns.

“There is little doubt in Reilly’s capacity to recapture the type of form which has earned him such high regard amongst our group,” Crows football boss Adam Kelly said.

Regarded as one of the state league’s best ruckman, Strachan has played three AFL games, most recently in Round 23 last season.

Murphy was substituted from the Carlton game due to neck soreness and not yet recovered.

Half-back Wayne Milera, who has not played in the AFL since Round 1, also remains out of the top side.

The SANFL has a bye this weekend due to the state game against Western Australia.

Adelaide ruckman Reilly O’Brien has confirmed he has been dropped for Saturday night’s home game against Brisbane.

O’Brien, a member of the Crows’ leadership group, trained with the club’s SANFL team during match simulation on Wednesday and told SAFM on Thursday that he was omitted this week.

In-form Kieran Strachan will come into the team to play his fourth AFL match.

“I got the news yesterday that I’m out this week, so bit disappointing after a bad couple of games, but I will be back hopefully as soon as possible,” O’Brien said. Reilly O'Brien has been dropped from the Crows lineup. Picture: Sarah Reed/AFL Photos via Getty Images

The 2020 best-and-fairest winner said he had some sense the news was coming before training after talking to the coaches.

“You can sort of smell it and you walk past in the corridor and go ‘I’m not getting a good vibe there’,” he said.

“It’s all part of football so you move on and get on with it.

“There’s two ways you can go, you can soon and mope around and say ‘why me?’ And blame others.

“Or you can just stay positive and get on with it and focus on what you can do to get back in the team.”

Lachlan Gollant, Harry Schoenberg, Brayden Cook and Billy Frampton also appeared in line for the axe after training with the B side on Wednesday.

Adelaide will announce its team this evening.

The 2020 best-and-fairest winner trained with a seconds side at West Lakes on Wednesday, while No.2 ruckman Kieran Strachan was with the top team.

The Crows have done that occasionally this season but with O’Brien down on form and it being the week’s main session, it points to a ruck swap against the Lions.

Brodie Smith and Ned McHenry will be two of the inclusions, having emerged from concussion protocols and completing the match simulation in the As.

Key forward Darcy Fogarty and onballer Jake Soligo were on the same side, putting them in position for a recall.

Defender Luke Brown said the training line-ups did not indicate the AFL team was already picked.

But he said O’Brien’s form had been down for a fortnight and Strachan was playing well in the SANFL.

“The AFL squad have had a poor couple of weeks,” Brown said.

“I’m sure they (the coaches) are just looking at a few different looks to see what it looks like for the weekend.” 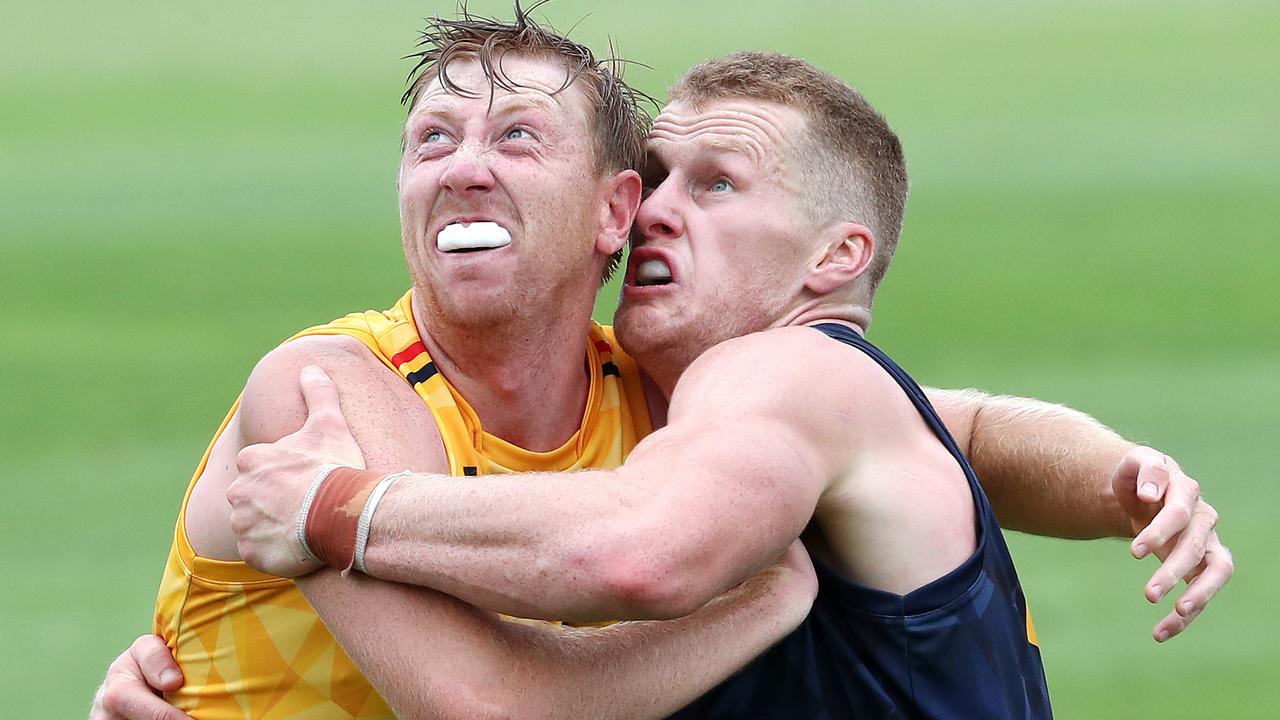 O’Brien received three coaches’ votes for his performance in the thrilling win over the Western Bulldogs in Ballarat three matches ago.

But he has been far from his best this season.

He was beaten by GWS ruckman Braydon Preuss two games ago and struggled to have an influence against makeshift duo Tom de Koning and Jack Silvagni on Sunday.

Strachan ranks second in the state league for hitouts this season and also averages 17 disposals. He has played three AFL matches – one in 2020 and the last two of 2021.

The latter two were when O’Brien was injured.

“When ROB (O’Brien) is at his best, he’s dominating the air for us, and Strachany’s been able to do that in the SANFL so far and he can kick goals as well.

“(O’Brien) is a past B and F (best-and-fairest) winner, so he’s really proud and wants to get back to that level.”

Brown said the club had strong depth and competition for spots, boosted by the form of the reserves team, which sits in second spot with a 5-1 record.

Like O’Brien, Frampton has struggled since being one of Adelaide’s best against the Bulldogs.

Small forward Lachlan Murphy is in doubt to face Brisbane after waking up with neck soreness and not taking part in the session.

Murphy, who had neck surgery during the off-season, ran on the track beforehand.

Crouch was prolific in the SANFL on Saturday, combining 36 disposals with eight marks and six tackles after he was a shock omission from the AFL line-up ahead of Round 8.

But the 2017 All-Australian and club best-and-fairest winner may need more time to convince Crows coaches he is a first-choice midfielder with Burns implying he wouldn’t necessarily come straight back into the side. 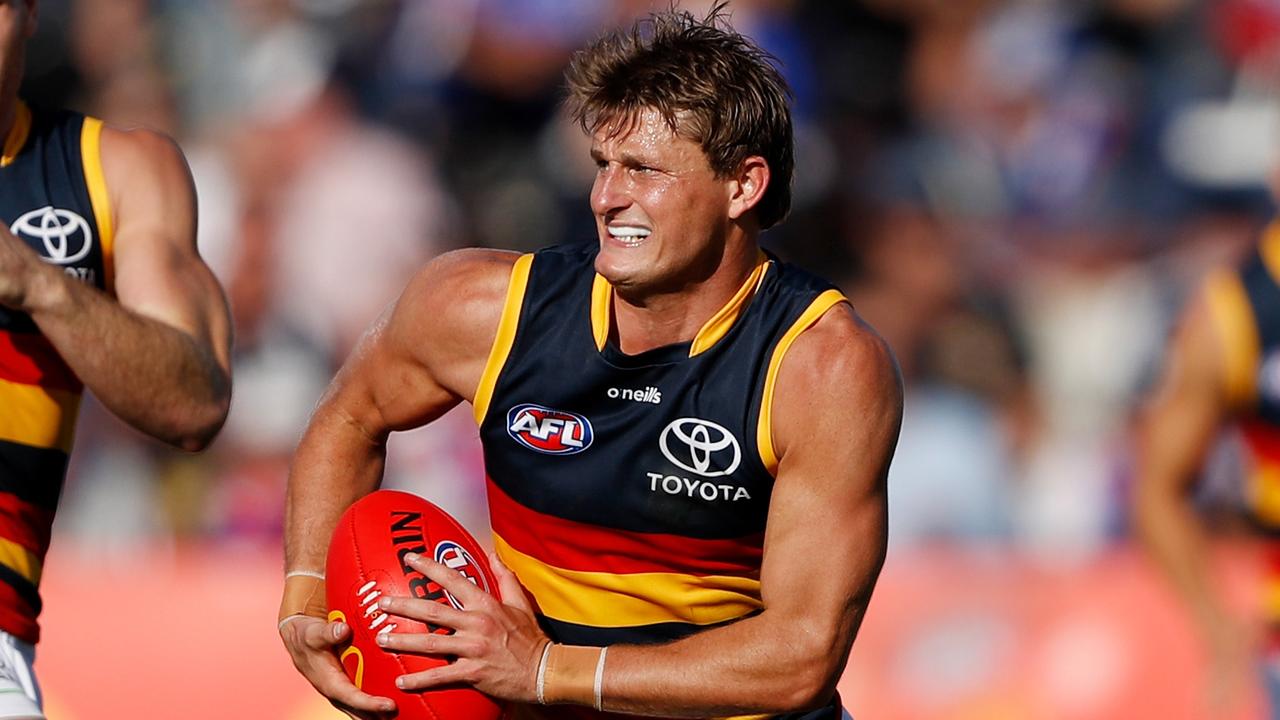 Matt Crouch was dropped for round 8. Picture: Dylan Burns/AFL Photos via Getty Images

Burns said regular coach Matthew Nicks – who missed the match through Covid protocols – was leading discussions with Crouch, but hoped the experienced onballer could show enough in the SANFL to make a best-22 return “at some stage”.

“Nicksy’s the one that’s had the major conversations with Crouchy. It’s pleasing the boys that have gone back (to SANFL level) have always played well.

“Crouchy’s a terrific player. He’s been a best-and-fairest winner, he’s been an All-Australian, so we want him to go back there and play good footy, and hopefully get back up into the senior team at some stage.”

Small forward Lachie Murphy, who had surgery to fix a bulging disk in his neck over summer, sparked concern when he was forced out of the match after a heavy Patrick Cripps tackle late in the third term. Burns said it was unclear whether any damage was sustained.

“I’m not all over it, just the docs came at three-quarter time saying he was a bit sore,” Burns said.

“There is (concern) to an extent. I’ll find out a little bit more (during the week).”

The temporary coach rued a costly six-goal-to-none third quarter against the Blues but said the opposition deserved credit for a blistering period of play.

“The third quarter was just an avalanche,” he said.

Media street: Cornes and Cornes go head-to-headPort back in the finals conversation

“To Carlton’s credit, that was some pretty hard football to stop.”

Originally published as AFL 2022: All the Adelaide Crows news leading into the Round 9 clash with Brisbane