Jake Stringer’s fitness levels have copped another stinging appraisal with a former Bomber going as far as to say his workrate threatened to become a ‘disease within the team’.

Essendon forward Jake Stringer has been slammed for being unfit as one former Bomber said his lack of workrate threatened to become a “disease within the team”.

Ling’s comments came as former Bomber Adam Ramanauskas said Stringer’s workrate — as a senior player at the club — set a bad example for the team’s younger players and had the potential to spread through the playing group. After recovering from a hamstring injury, Stringer returned for his first game since Round 7 in the Bombers’ 26-point loss to Carlton in their 150-year anniversary match at the MCG.

Stringer finished the match with just nine disposals and one behind and failed to lay a tackle, leaving Rutten to describe it as a poor game and said the Bombers needed more from him as a senior player.

Ling went a step further, saying Stringer’s effort — or lack of — was not good enough.

“He just wouldn’t get himself involved in the game …. it was the workrate, one effort and he was bent over, hunched over hands on knees struggling,” Ling said on ABC radio.

“That’s not good enough. I know we can’t go too far there — and I’m not trying to shame anyone or anything like — that but Jake doesn’t look fit. He simply doesn’t.

“Watching how exhausted he got after one effort (Friday) night at different times he couldn’t keep up, he couldn’t have that impact that he can have in a game of football because he is not match-fit.

“I don’t think he looks (like he is) lifestyle and preparation-fit. I don’t want to be attacked on that because it’s just a fact when you are preparing for the best competition of a certain sport you are up against the best athletes in the world in that sport and you have got to be at your very best and if you’re not you get shown up, no matter how much talent you have got.”

As the Bombers search for a way to turn around their 2-10 season, Ramanauskas said Stringer needed to set a strong example for the team’s young players. Stringer picks up one of only nine possessions in his comeback game. Picture: Robert Cianflone/Getty Images

“There was a body of work last year which suggested that Jake had matured into a really really good player which we all know he can be, but that was on the back of what you are talking about — that was workrate, it was increased workrate,” Ramanauskas said.

“So there is your blueprint. There is your starting point of where you need to be as a footballer to continue to move forward.

“You see guys running past (him) and (for) Jake it was one effort and it was all over for him.

“If he wants to be a senior leader of the football club, you can’t set that example, you just simply can’t because that means then Nic Martin sees that being a young player in that forward line and he goes ‘Well Jake did that, so that’s OK for me to do that’.

“Archie Perkins sees that, a first round draft pick, ‘Oh, Jake does that, so that’s OK for me to do that’.

“Then it just becomes this disease within your team.”

Coming off his best season at Essendon when he finished as the Bombers’ leading goal kicker with 41 majors in 2021, Stringer has played just five games this year.

The 28-year-old missed the opening game of the season with a groin injury before being hampered by hamstring setbacks.

Rutten’s brutal assessment of Stringer’s fifth game of the season and first in six weeks came amid his otherwise positive post-match summation of Essendon’s 26-point defeat to Carlton on Friday night.

The 28-year-old was one of the AFL’s form players in the second half of last season and trumpeted his career-best condition in February.

But a groin injury grounded Stringer soon after and kept him out of round 1 before hamstring setbacks on both legs also cost him matches at separate times.

He coughed up five turnovers and failed to lay a tackle against the Blues, adding only nine disposals and one behind in 90 minutes’ game time.

Rutten ruled out a mini-training block for Stringer, instead hoping continuity of matches would drag his best football out of him.

“(Stringer) had a poor game tonight,” he said.

“As a senior player for us, we need more from him and hopefully he’ll be able to bounce out of that.

“He would have played last week if we didn’t have the bye, so his preparation’s been fine.” Essendon coach Ben Rutten said Jake Stringer would have played a week earlier if not for the bye. Picture: Getty Images

The Bombers scored three of their seven goals in a five-minute burst in the first quarter but did waste a bevy of gettable chances, especially late in the third term.

Laborious ball movement at times made life difficult for their forwards, with spearhead Peter Wright missing his two set shots to finish goalless for the third consecutive game.

But Rutten was pleased with Essendon’s ability to win the centre clearances and hold its own generally at stoppages, as well as with his players’ vastly improved tackling.

“It’s been a fantastic week for the footy club (with the 150th celebrations) and a lot of people have put in a lot of hard work,” he said.

“The way the players embraced the week and prepared and set themselves up for tonight’s performance; I was really pleased with the whole football club.

“There are certainly some signs (of progress) there to take with us. Unfortunately, we’re not quite getting the scoreboard to move and churn the way we’d like just yet.”

Cerra, in particular, looks in serious doubt of playing on a six-day turnaround against Richmond on Thursday night, but coach Michael Voss said they would wait for scans to determine his availability.

Voss was animated at three-quarter time after Carlton failed to put the foot down when it went 38 points clear midway through the third term.

“I thought our first half was really strong – probably our first two-and-a-half quarters were good – but we just strayed from doing some little things well, which we’d been doing earlier,” Voss said.

“I think we’re still in that phase where we’re learning to win and win properly, and we acknowledge that there’s still some growth left in us.

“When people talk about expectations (with) where we’re going to finish; our expectation is that we stay with what we’re trying to do and play a certain way.

“There are certain behaviours that we need, and we have to stay on that, so it was more reinforcement (but) really pleased we’ve been able to walk away with the four points.”

Carlton has spoiled Essendon’s 150th celebrations with a comfortable victory at the MCG on Friday night, but will sweat on star midfielder Adam Cerra’s tight hamstring.

The Blues lost prized recruit Cerra before quarter-time then weathered a brief Bomber storm to largely cruise to a 26-point win that provisionally propels them inside the top four.

Harry McKay and, to a lesser extent, Charlie Curnow terrorised an outmatched Essendon defence, combining for five goals and 14 marks, including seven inside 50. Harry McKay was brilliant in his return from injury. Picture: Michael Klein

They rubbed further salt into the Bombers’ wounds early in the third term, when McKay’s deft tap to Curnow set up a classy dribble goal for Carlton’s first of the second half.

The Blues were never seriously troubled from there but, perhaps, wasted an opportunity for a handy percentage-boosting triumph.

Sam Docherty (33 disposals) continued his fairytale comeback from a second bout of cancer with a brilliant performance, while George Hewett, Sam Walsh and Patrick Cripps all neared 30 touches. Another week of soul searching looms for Dyson Heppell and the Bombers. Picture: Michael Klein

But the Bombers’ infamous drought without a finals win is certain to extend for another year as they slumped to a 10th defeat from 12 games.

Prime-mover Darcy Parish (corked calf) was also subbed out late in the third term in a further blow.

Essendon’s three-goal surge inside five minutes in the opening term to temporarily snatch the lead represented its brightest patch of the night but scoring otherwise proved hard work. 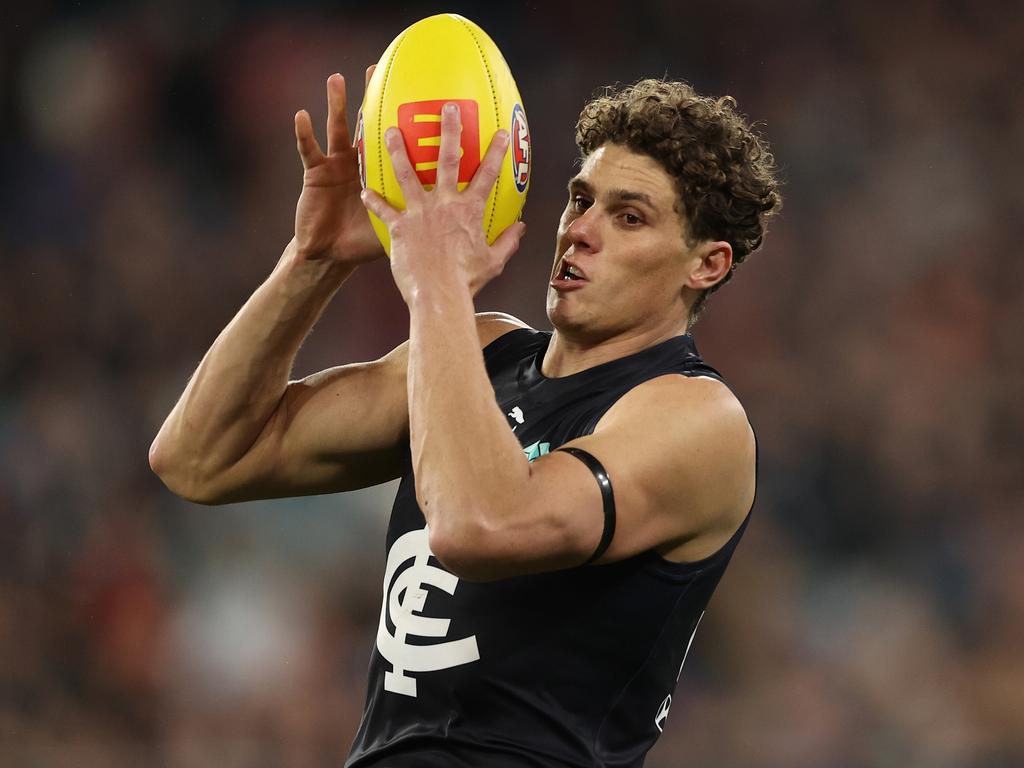 None of seventh-gamer Zach Reid, Jordan Ridley or Jayden Laverde could stop Carlton’s two in-form forwards, with McKay particularly influential in his return after knee surgery.

Essendon also welcomed back a big name of their own, but Jake Stringer’s first match in more than a month was a forgettable one, while Peter Wright went goalless for the third match in a row.

Harry Jones and ruckman Sam Draper, one of the few Bomber winners, bobbed up to kick a couple of first-half majors each, but lacked the same silver service their Blues counterparts received.

The Bombers failed to capitalise on its surprise centre-clearance dominance (13-8) against the much-vaunted Blues midfield, kicking just one goal from 11 such clearances in the first half. 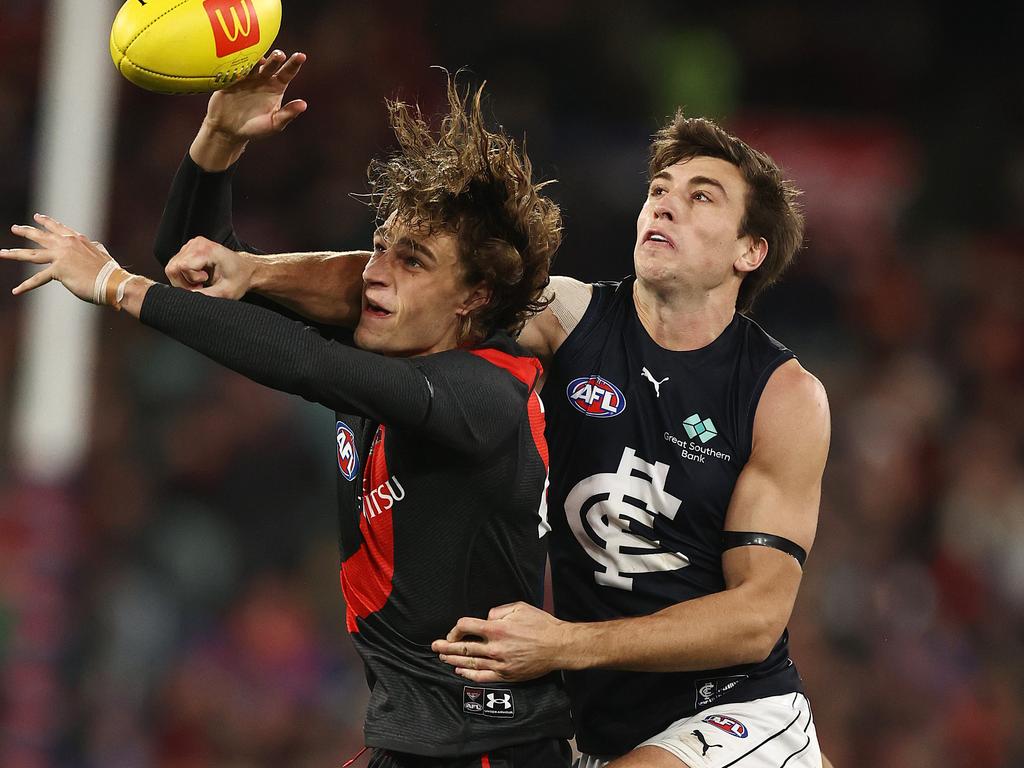 Caleb Marchbank made a triumphant return for the Blues. Picture: Michael Klein

Caleb Marchbank made it through unscathed in his first AFL match in 1069 days after a series of injuries.

Marchbank’s talent has never been in question at the Blues or Giants, where he was an early draft pick, but he’s rarely been able to get a clean run without setbacks.

He amassed only eight disposals and four marks as part of Carlton’s Jacob Weitering-less defence, but more prolific days are ahead if he can stay on the field.

It’s little wonder Marchbank’s teammates tried to shove him into the centre as they belted out the club song. Dylan Shiel stood up to the pressure for the Dons. Picture: Getty Images

Maligned Essendon midfielder Dylan Shiel averaged a modest 17 disposals in his past five outings and is one of many Bombers not living up to expectations this year.

But the 29-year-old should be spared criticism on this night.

Shiel mustered eight disposals, a 50m-plus goal and three clearances in the opening quarter on Friday night to set the tone for a much-improved display.

He finished with 27 disposals and 10 tackles, as well as winning eight clearances (five out of the centre) to do his best to keep Essendon in the match.