AFL 2022: Champion Data reveals your club’s flat track bullies and those who rise against tough opposition

Every team’s supporters have players they think perform better against lower sides. But who stands up when the heat is on? Find out now.

Cats forward Jeremy Cameron has a big chance to boost his credentials against a top-eight opponent in Saturday’s blockbuster clash against Richmond after analysis showed how his impact dropped off against finals contenders.

While he is sitting second in the Coleman Medal race, the Geelong star has been unable to fire against top-eight teams in the way that he has against the bottom 10 sides this year.

Champion Data analysis has revealed Cameron performs 57 per cent better against teams in the bottom 10 compared to top-eight teams based on ranking points in 2022.

As his impact on the scoreboard dropped off significantly, Cameron averaged just 0.5 goals against top-eight sides compared to 4.1 against the bottom 10. And the Cats’ sharpshooter is not the only big-name star to make a meal of lower-ranked opponents.

Champion Data’s analysis is based on a minimum of seven matches played this season and excluded the medi-subs or players who were injured in those matches.

After an injury-interrupted first season at Geelong, Cameron sits second on the Coleman Medal table – one behind Curnow – with 39 goals.

But Cameron’s biggest hauls of the season have come against teams sitting outside of the top eight. 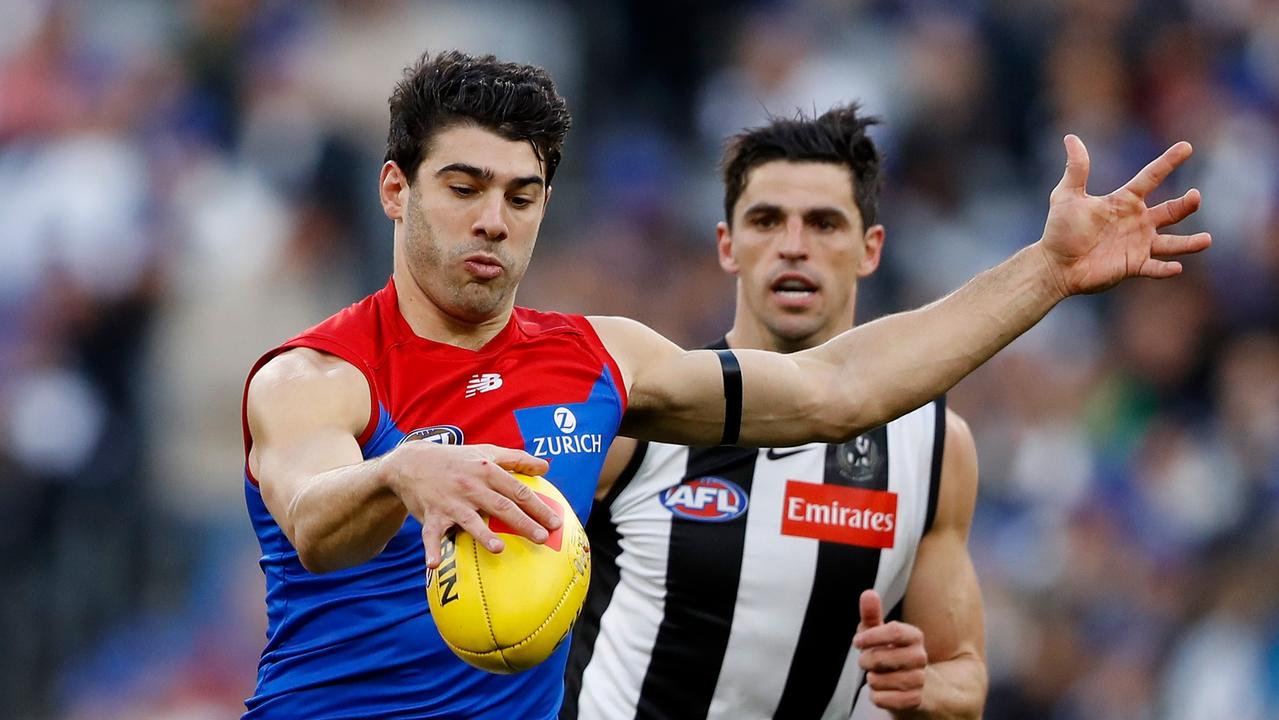 Melbourne’s Norm Smith medallist Christian Petracca is among the players who haven’t had the same results against top opponents. Picture: Dylan Burns/AFL Photos via Getty Images)

But he was also goalless against Sydney (seventh) and Fremantle (third) and had just one goal against the Brisbane Lions (first).

Ahead of his 200th career match, Cameron, who kicked six goals against Richmond last year, said he was ready for the challenge against the resurgent Tigers.

“I like playing against the best sides in the comp, you get a really good feel for where you are at personally and also as a whole, as a team,” Cameron said.

“They (Richmond) are going really well at the moment. They are playing really good football and it is going to be a great game that’s for sure.

“It’s exciting that my 200th has fallen on this game.”

The impact of Richmond forward Tom Lynch has also dropped off this season against the top-eight teams.

Lynch has averaged 3.7 goals against the bottom 10, falling to two against the top-eight. His average forward 50 marks also fell from four to 1.3 against the top-eight, but his shot at goal accuracy improved against the finals contenders.

Champion Data’s analysis showed Giants co-captain Greene performed 98 per cent better against the bottom 10 teams, although he did kick four goals against the Lions in Round 11.

Originally published as AFL 2022: Champion Data reveals your club’s flat track bullies and those who rise against tough opposition