AFL 2022: Every club’s draw difficulty for the remaining rounds ranked by Champion Data

The race for the top eight has never been hotter. Which clubs are in the box seat based on their draw? See the 1-18 draw rankings.

Melbourne’s suddenly shaky push for back-to-back flags will be further tested by the toughest draw of any club in the second half of the season, but there is reason for Richmond and Collingwood to get excited.

But if you’re a Saints fan, you should probably look away now.

Champion Data has ranked every club’s run home, and it’s tough reading for Demons fans desperate to see their team win a premiership in front on of their eyes after last year’s grand final was moved to Perth.

They’ve had the fourth easiest draw to this point of the season, but things are about to change.

In the Demons’ last nine games, they’ll meet three current top-four teams and face ominous trips to GMHBA Stadium to face the Cats and the red-hot Dockers in Perth.

SCROLL DOWN FOR THE FULL DRAW DIFFICULTY LADDER

Demons coach Simon Goodwill be hoping the return of the very valuable Steven May on Thursday night against Brisbane at the MCG will help his side find its mojo again after three straight losses.

“We haven’t have much cohesion in the back half of the ground over the last month. We’ve had a variety of guys out for a variety of different reasons,” Goodwin said on Monday.

“To get that back six or seven together consistently, it’s going to be something that’s really important to us, and Steven is a big part of that. He’s an outstanding player and he’ll come back in.” 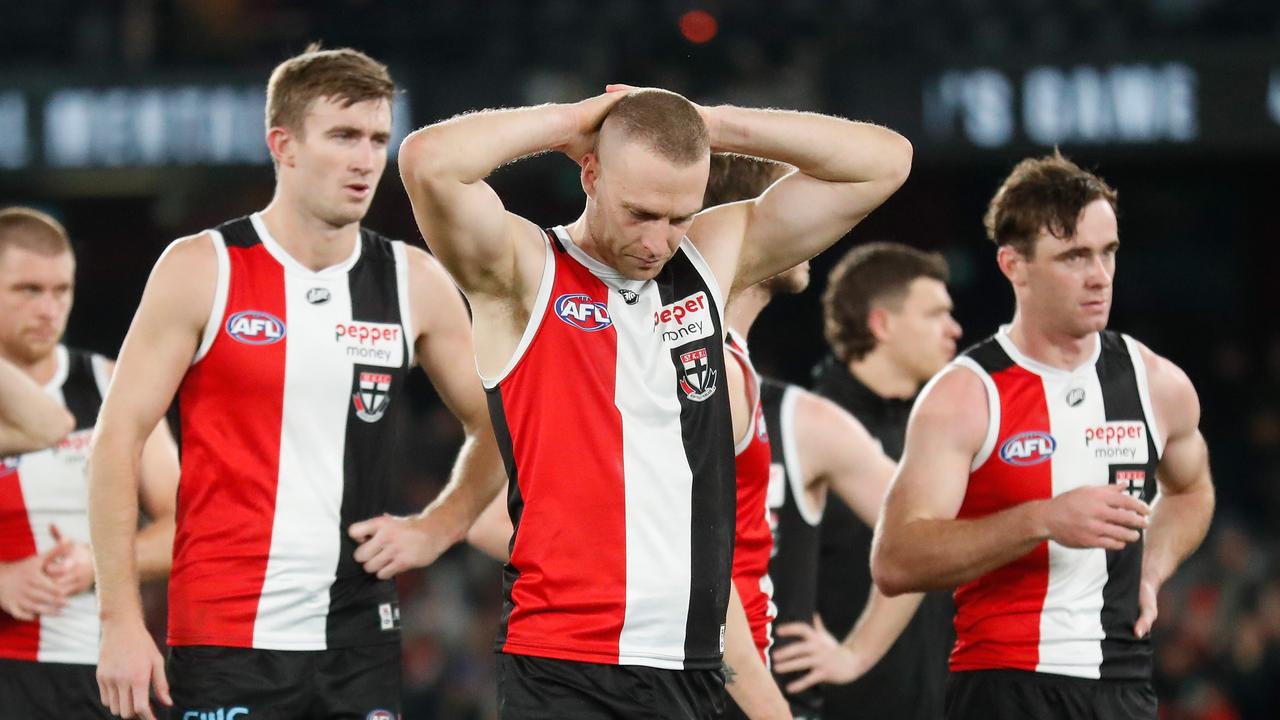 The news is better for sixth-placed Richmond, with the Tigers to have the fourth-easiest run home with six games to come against bottom-10 sides.

Of their tougher challenges in the back half of the season, they’ll get the luxury of facing Geelong, Fremantle and Brisbane all in Melbourne.

Although they’ll have to do it in the short term without former skipper Trent Cotchin, who’ll miss at least one week after having surgery on his broken clavicle.

Collingwood, meanwhile, is remarkably on track to play finals in Craig McRae’s first year in charge after finishing in the bottom two last year.

The Magpies have the fifth-easiest run home according to Champion Data, and probably need five wins from its last nine games to make the eight.

The unknown at this stage is whether Jordan De Goey’s latest mishap will have an impact on the group and the Magpies’ recent run of form. Are the Tigers primed for a top-four tilt? Picture: Michael Klein

For the Saints, they may rue their surprise loss to Essendon for a long time.

Once seemingly a top-eight lock, St Kilda now faces an uphill battle to be there in September.

The Saints have the fifth-hardest draw in the remaining rounds and face only one current bottom-four team, the Eagles in Perth in round 19.

Facing Geelong at the Cattery, Brisbane at Marvel and Sydney at Marvel in the final three rounds will be tricky when you’re one of a number of sides fighting for a finals spot.

No wonder Saints coach Brett Ratten, who’d be well aware of the road to come, was so gutted last Friday night.

It’s also bad news for the Western Bulldogs, with last year’s grand finalists at long odds of making the finals with the second-hardest draw from now to September. After facing Hawthorn on Friday night, the Dogs tackle six straight top-eight opponents including all of the current top four.

At the other end of the spectrum, in-form Gold Coast has the second-easiest run home and remains a chance of playing finals for the first time in the club’s history.

Although a season-ending injury to star defender Wil Powell has made that quest a lot tougher.

Adelaide has the easiest fixture of any club by a big margin, with only one game remaining against a top-four opponent (Melbourne) and two encounters with North Melbourne to come for Matthew Nicks’ men.

Originally published as AFL 2022: Every club’s draw difficulty for the remaining rounds ranked by Champion Data