The AFL is open to bringing the start time of Friday night games forward — but with a catch. Have your say on when matches in the prime-time slot should kick off.

AFL chief executive Gillon McLachlan says he is open to an earlier 7.20pm start-time to Friday night games next year as the league attempts to win back fans post-Covid.

The concession will thrill fans as well as Richmond coach Damien Hardwick, who has long believed Friday night games at 7.50pm are way too late.

The change would likely come in for next year, with the league traditionally starting games late to help maximise broadcaster Seven’s lead-in as well promote strong attendances.

But with many workers now spending Fridays working from home the challenge of returning to pick up kids and then getting into the city is no longer such an issue.

The league has trialled several different initiatives this year including Friday night double-headers, with Friday night’s starting time in Melbourne 7pm and 8.40pm for the game in Perth.

But the AFL will grant fans plastic memberships instead of digital-only versions next year after strong complaints from fans.

The league will also release rounds 1-15 next year in a fixed format for greater certainty and have scheduled a day Grand Final based on the strong feedback from fans.

McLachlan said on Friday he was open to a change to the Friday start time if fans were keen.

“If we can get it at 7.20pm and if that’s where our punters and supporters want to be, that’s where we want to start. Absolutely,” he told 3AW.

“If we can get there … It’s only ever been a 7.50pm (start time) when it’s a big city and people are going home to pick up kids and come back in to get to the game.”

McLachlan refused to discuss the league’s TV rights negotiations after organisations including News Corp, Nine, Seven and Ten all pitched deals within the last fortnight.

It remains to be seen whether the AFL would split its free-to-air broadcast rights between multiple broadcasters to allow Nine or Ten to secure at least one game per weekend.

But McLachlan would not comment on the progress of a deal that will underpin expansion into Tasmania and fund the men’s pay deal.

“I am not really going to comment on the broadcast (rights). Everyone knows we are in that process and it’s playing along and it will finish when it finishes.” The AFL has punted the pretenders from prime time, with premiership heavyweights the only clubs granted games in blockbuster timeslots in the latest fixture release.

Stragglers including Essendon, Hawthorn, West Coast and North Melbourne are set to play out their seasons in the shadows of greatness with rounds 20-22 built around matches that will shape the flag race.

The showpiece Saturday night matches are Geelong hosting the Western Bulldogs at GMHBA Stadium, the Cats hosting the Saints and Melbourne taking on Carlton at the MCG.

Similarly, the 3.20pm Sunday timeslot has also been siphoned off for September-bound clubs.

Richmond will host Brisbane at the MCG, the Lions will host Carlton and Sydney will host Collingwood in those encounters.

Cashing in on the floating fixture is a win for couch potatoes, who have been frustrated in recent seasons by the lack of quality matches in marquee slots.

But Thursday night footy has been dropped for the remainder of the home-and-away season. 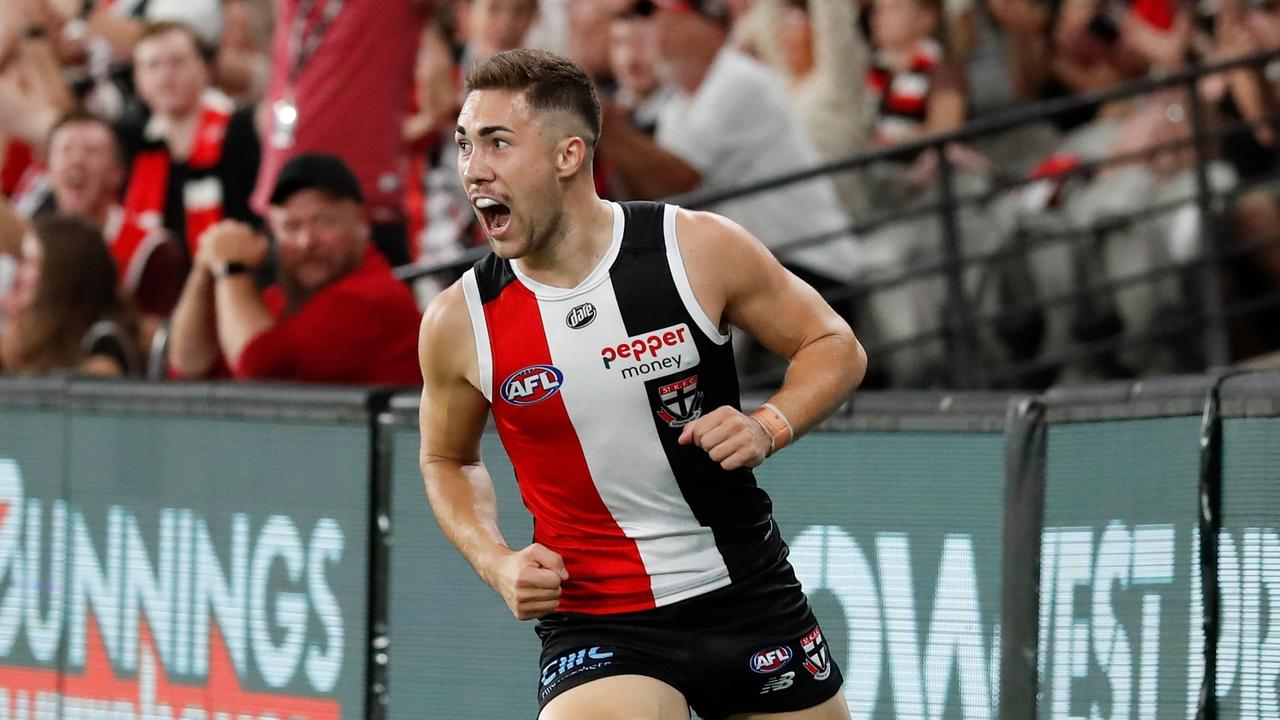 Jade Gresham and the Saints will feature in Friday night footy in round 22. Picture: Michael Willson/AFL Photos via Getty Images

While a Thursday night final is possible in week one of September – given finalists will be fresh from the pre-finals bye – only three matches in the TV-popular timeslot remain.

They are the top-of-the-table clash between the Dees and Lions on Thursday night, next week’s semi-final rematch between the Lions and Dogs at the Gabba and the Cats hosting the Demons down the highway in round 17.

Curiously, the Blues-Dees clash appeared worthy of Friday night billing in round 22.

However, the Blues play the Lions at the Gabba the previous Sunday and cannot be given a second five-day break this season.

They beat the Swans off the short turnaround five days after knocking off the Giants in ex-coach Leon Cameron’s farewell match in western Sydney earlier this year.

When the league finalises round 23, a Friday night Brisbane-Melbourne game would potentially be for a top-two spot.

Then the AFL could schedule the traditional Carlton-Collingwood clash on Sunday afternoon in the 3.20pm or 4.40pm slot as both teams push for a return to finals.

A best-case scenario for the AFL would be one of those teams having to win to secure a double chance or even finals participation with the last or second-last game of the season.

It would add significant drama to the AFL’s fixture in a year with excellent flowing football and momentum shifts, but poor crowds so far.