Long considered a senior coach-in-awaiting, Blake Caracella has declared his ambition to earn the top job at an AFL club as he prepares to take charge of Essendon in Ben Rutten’s absence.

Essendon premiership star Blake Caracella has declared a senior coaching gig is now “on his radar” as he prepares to take charge of the Bombers for the first time on Sunday.

With coach Ben Rutten unavailable due to the AFL’s health and safety protocols, Caracella will be charged with trying to avoid a disastrous 0-4 start to the season when Essendon meets Adelaide at Marvel Stadium.

Caracella, who has served a strong apprenticeship with assistant coaching roles at Collingwood, Geelong, Richmond and now Essendon, said he hoped it would not be the last time he coached a senior game.

“I kind of fell into coaching when I broke my neck way back (playing for Collingwood) in 2007. “Mick (Malthouse) gave me a chance to coach the forward line and through that journey I have had a lot of experience coaching in some good environments, (and) I think with that experience, confidence and belief that I can do the job.”

Caracella, who played in Essendon’s 2000 flag and then added a second premiership medal with the Brisbane Lions in 2003, said his desire to be a senior coach had “grown over time.”

“Fifteen years is a long time and I’ve matured as a person and I’ve learnt along the way,” he said.

“I fell into coaching and didn’t really know if I wanted to do the senior job but obviously the last four, five, six years I’ve really enjoyed the demands of the job.

“I’ve watched Chris Scott, Damien Hardwick and Ben Rutten and been lucky enough to have some good mentors.

“I’m looking forward to the challenge ahead but really, to me, Essendon this week is the most important thing.” 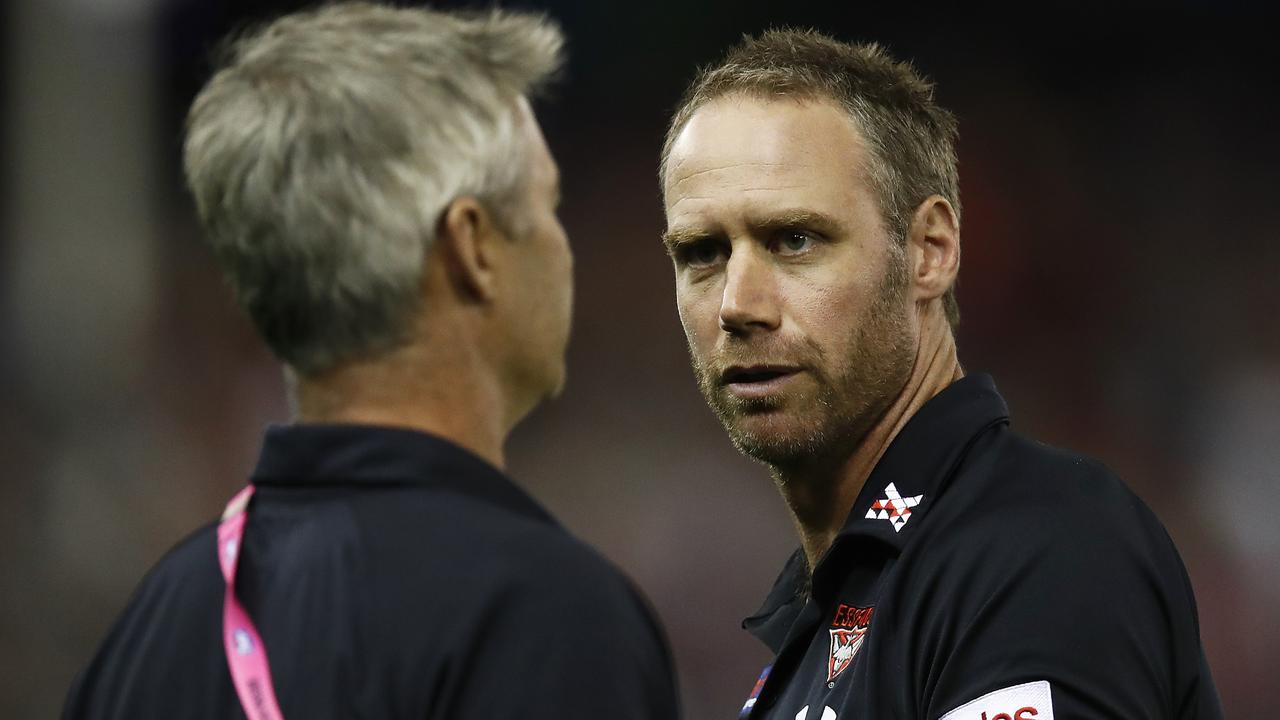 The stand-in coach said the club was still working through what input, if any, Rutten will have on game day from home.

“He’s going to have some communication with myself and the coaches but the nitty gritty we’re not sure yet,” he said.

“Ben has spoken to a couple of coaches from other sports who have been in similar situations so we’ll discuss that over the next couple of days.”

Wingman Tom Cutler will miss the clash with Adelaide after entering the AFL’s health and safety protocols, while defender Michael Hurley (hip) is “two to three weeks away” from a VFL return.

Forward Anthony McDonald-Tipungwuti is “a few weeks away” from a senior return as he builds up his match fitness in the VFL. Blake Caracella won plenty of plaudits for his work as an assistant at Richmond.

DONS COACH, PIES STAR OUT DUE TO COVID ISOLATION

Essendon coach Ben Rutten has been forced to isolate as a COVID-19 household contact and will miss Sunday’s clash against Adelaide.

Assistant coach Blake Caracella will take over the coaching reins as the Bombers attempt to chalk up their first win of the season at Marvel Stadium.

The Bombers confirmed on Wednesday Rutten was a close contact and had tested negative for the virus but would remain at home.

It follows strong comments from Richmond coach Damien Hardwick who on Sunday called on premier Daniel Andrews to relax the close contact rules.

Currently, any person who spends more than four hours indoors with a positive person must isolate for seven days. Ben Rutten will miss Essendon’s Round 4 game due to health and safety protocols.

There are no major fears the virus will pose a sudden threat to Essendon’s playing and coaching staff who all tested negative as per testing requirements.

Rutten will become the third AFL senior coach in four weeks to miss a home and away game due to the league’s health and safety protocols.

Football manager Josh Mahoney said Rutten’s situation should not cause major disruption to their preparation or coaching efforts on Sunday.

“Ben has tested negative but is a household contact and will isolate for the required period of time,” Mahoney said.

“We understand this is the landscape and like many other clubs at the moment, will adjust to the situation accordingly.

“As such, while Ben will remain involved in the program remotely, Blake Caracella will take on the duties of the senior coach position in Ben’s absence over the coming days, with our program remaining fully focused on our preparations for Sunday’s game against Adelaide.” Magpies’ coach Craig McRae confirmed the star onballer had entered the league’s health and safety protocols and would not line-up against the Eagles at Marvel Stadium.

It is a blow for Collingwood’s midfield which will also be missing superstar Jordan De Goey for the clash after he was suspended for one match for his tackle on Patrick Dangerfield.

It could lead to more midfield minutes for Rising Star nominee Nick Daicos and skipper Scott Pendlebury who was moved into a half back role for the start of the season.