Former players have taken aim at a controversial decision which handed Tom Hawkins a crucial goal against Brisbane. Was it the wrong call? Watch the vision now.

Former players have taken aim at a controversial decision which handed Geelong forward Tom Hawkins a crucial goal in his side’s win over Brisbane.

Early in the final quarter, Hawkins appeared to shove his Brisbane opponent Harris Andrews in the back before marking the ball and kicking a goal.

Andrews immediately protested to the umpire but was told:

“You’re both running forward and momentum took you forward, he’s held his ground.”

“Oh boy. You can see why Harris Andrews was upset. He got one paid against him near the boundary line where he gave a little shove,” Hodge said on Channel 7.

“That was clearly hands in the back.” Tom Hawkins was dominant for the Cats. Picture: Getty Images

Fellow 7 commentator Matthew Richardson added: “I don’t know what else is in the back if that isn’t.

“Umpire’s explanation was that they were both moving forward – Harris was for one reason, he was pushed. It didn’t make sense that explanation.”

Meanwhile on Fox Footy, Nick Riewoldt was scathing on the adjudication of the push in the back rule.

“Umpires make mistakes and we have come a long way already this year in our non-bashing of the umpires so when an umpire makes a mistake, don’t give us that disgraceful explanation,” he said.

“That’s trying to dig yourself out of a hole with a completely absurd explanation.”

When quizzed about the decision after the match, Lions coach Chris Fagan refused to buy in.

“I’m better off to let you blokes talk about that,” he said.

“I don’t comment on umpires, I haven’t had a chance to look at the replay so it wouldn’t be a good idea to say anything at this point in time.”

“I didn’t think about it at all,” he said of Hawkins’ grabs.

“I didn’t see it that way (being questionable decisions). I thought that the two `gorillas’ going up against each other – Adams is a big, strong intercept marking player – and when Hawkins gets good position, he’s hard to move as well.

“And part of the art of being a key forward is moving the opposition within the rules.

“No one remembers the `hands in the back’ rule, but the game’s much better without it.” Geelong toppled Brisbane in a thriller for the second time in two seasons at GMHBA Stadium tonight.

After another epic arm wrestle between the 2020 preliminary final combatants, it was the Cats who had their collective nose in front by 10 points when the siren sounded.

Not unlike the cliffhanger Round 2 clash of 2021 – won by Geelong by a lone point when Zac Bailey was denied what was viewed by many as a certain free kick in the dying seconds – there was again more than a hint of controversy in some late decisions. There had been no fewer than 10 lead changes throughout the night and there were a couple of goal-line defensive marks by the Cats in the dying minutes, not to mention an inexplicable miss by Cam Rayner when all alone at the top of the square.

But for all the drama and tension, Geelong had commanded many of the key stats indicators throughout the match, most notably 60-42 inside 50s and 15-9 in centre clearances.

Still, Brisbane, now winless in 13 straight matches at Kardinia Park dating back to 2003, would not lie down. The Tomahawk had his kicking boots on. Picture: AFL Photos/Getty Images

Daniel McStay was outstanding in attack for the visitors, taking an equal career-high 11 marks and booting three goals.

And when Charlie Cameron finally found his feet late with two great goals either side of the final change, it appeared as though they’d remain undefeated this year.

But Tom Hawkins stood tall late up forward for the Cats and his fifth sealed the deal.

It wasn’t until Quinton Narkle connected from 40m early in the third term that either team had managed to kick consecutive goals.

But marks deep inside 50 were converted by Daniel McStay and Joe Daniher, then a horrid midfield turnover enabled Brandon Starcevich to stroll inside 50 and kick the Lions’ third goal in four entries to wrestle back the lead. Quinton Narkle and Isaac Smith both had heavy influence for the Cats. Picture: AFL Photos/Getty Images

Remarkably, in that same period, Geelong had 14 forward 50 entries without managing a score as Marcus Adams piled up the intercept marks.

But Geelong poured on the pressure in the final term and in the end sheer weight of entries won the day.

But a series of near misses on five set shots – including one rare behind with the man on the mark 25m from goal touching Jeremy Cameron’s kick – kept the visitors within reach.

It was also obvious that the Cats had adopted a different method on their return to their home ground for 2022 right from the outset.

Geelong played more possession footy than in previous weeks – they’d been averaging 17 uncontested marks a quarter before Round 4, but had 16 inside the first 10 minutes alone. 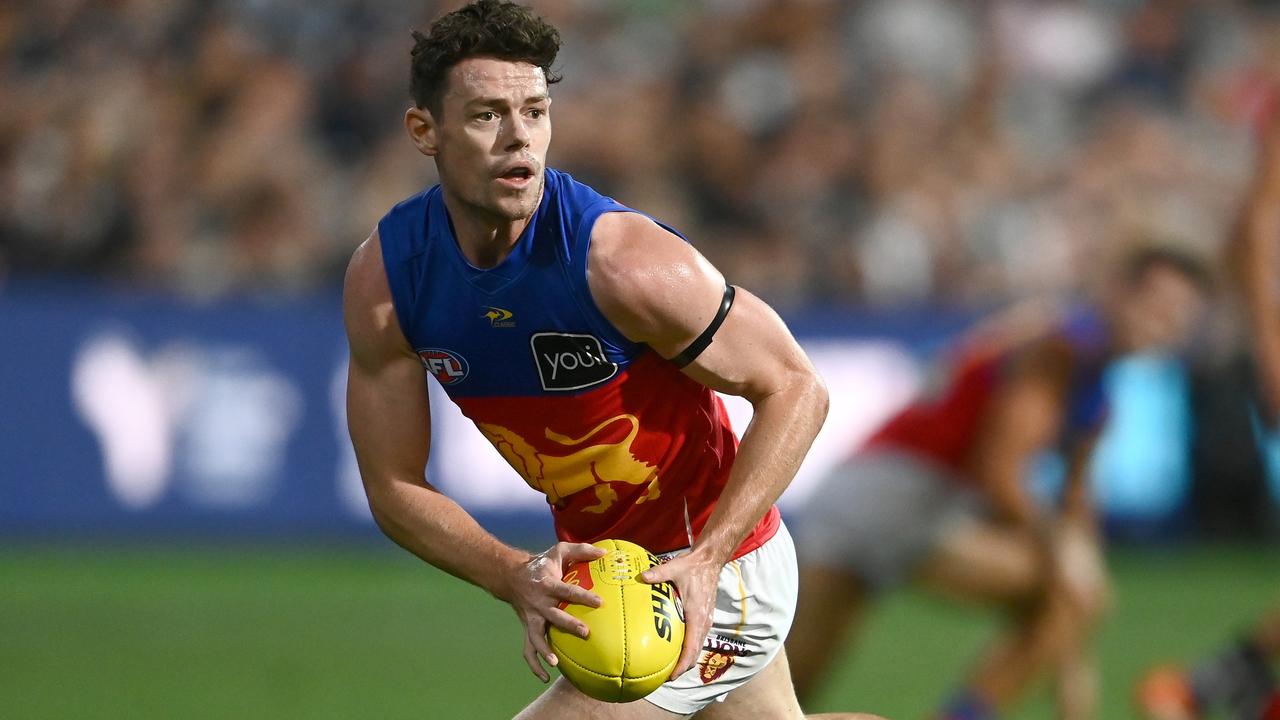 Irishman Mark O’Connor, increasingly a fix-it man for Cats coach Chris Scott, was given the task of cooling off white-hot Lion Lachie Neale.

But it was tag with a difference with the Cats’ backmen looking to use O’Connor on the rebound in a bid to keep Neale accountable.

Key backman Harris Andrews tried hard to at least be near Cats spearhead Jeremy Cameron, but moved towards Stanley when he drifted forward.

This left Darcy Gardiner and Marcus Adams to fend for themselves more regularly, as opposed to the more bunched and frugal defensive unit of the opening rounds of the season. They conceded five marks inside defensive 50 in the first term alone, compared to their match average of nine in the opening three rounds. Charlie Cameron and Daniel McStay impacted the contest for the Lions. Getty Images It was a particularly pleasant evening at Kardinia Park, both in terms of temperature and wind.

But with the northern stands and terraces removed in preparation of building the final grandstand, you get the strong sense that the gap will be a breezy factor in the dead of winter.

All tickets to the other three grandstands were sold out tonight as Cats fans got their first vague sense of normality – in terms of crowd numbers – since the Round 10 clash against Gold Coast last year. You need help: Uncle Michael Long’s plea to CyrilSacked: I almost burnt the house down