Youth will be the focus for the Cats, but three players from rival clubs shape as pickups that can help them go all the way — and two of them are Geelong locals.

How many of Geelong’s youngsters are going to pop?

For years, the talk around the football industry has been about when the Cats would fall off their perch.

Every time the calendar flips over the likes of Tom Hawkins, Joel Selwood and Patrick Dangerfield get older and the inevitable rebuild — one that was first mooted at the end of 2010 — has appeared a step closer. Geelong superstar Zach Tuohy is out of contract at the end of the season. Picture: Michael Klein

Each season Geelong has defied the doubters, brought in just enough fresh legs and shrewd recruits to stay afloat.

That same dance is being played out again in 2022, as the Cats carry on straddling that line of premiership contention and rejuvenation.

A quartet of new faces have made their AFL debut this year in the hoops — Ollie Dempsey, Mitch Knevitt, Cooper Stephens and Shannon Neale — plus 23-year-old Tyson Stengle has slotted in perfectly next to Hawkins and Jeremy Cameron.

Internally, the Cats are bullish about what ruck prospect Toby Conway will bring and they expect to get him some AFL gametime this year, while draftee Cooper Whyte has also shown talent.

A few of those draftees need to become elite players to replace the likes of Selwood and Hawkins in coming years and keep Geelong to stay at the top of the tree.

Defender Sam De Koning is right on that track as we speak, the Cats are high on Max Holmes and Stengle is already an elite small-forward.

The days of the Cats hunting the market for the best out-of-contract players aged 26-28 may have passed so youth will need to grow to continue the club’s highwire act.

No club manages its list better and finds winning players in all sorts of places as often as the Cats so if the next generation takes a step in the next 12 months, there’s no reason Geelong will fall off that cliff just yet.

With Cameron playing the best football of his career, the Cats could win it all in 2022 and still be in contention for years to come. James Worpel could be a prime target for the Cats.

Who the Cats should target?

We know the Cats love to lure homegrown talents back down the highway and with Worpel out of favour at Hawthorn, he could be a prime target. At 23, the 2019 Hawks best-and-fairest winner is in the perfect age bracket for a Cats midfield that will need some extra grunt in coming years as Patrick Dangerfield, Cam Guthrie and Joel Selwood age. Worpel is under contract next season but has also found himself out of the AFL side.

Another local, Queenscliff junior Darcy Gardiner is a free agent this year and would fit perfectly in a backline just short on height. The Cats told potential mid-season draftees they were eyeing key defenders before instead taking small forward Zane Williams, so they are in the market for defensive help for Sam De Koning and Tom Stewart. Gardiner can play a variety of roles and at 26, has plenty to offer. No doubt the Lions will be putting a multi-year deal in front of him.

Geelong has been here before, having made a play for the champion Roo ruck in 2019. Many Cats fans wonder what could have been if Goldstein had been there to resist Richmond’s Toby Nankervis in the 2020 grand final. Now 33, it’s unlikely the Cats would be after a stopgap ruck solution, but could they be tempted by the unrestricted free agent? 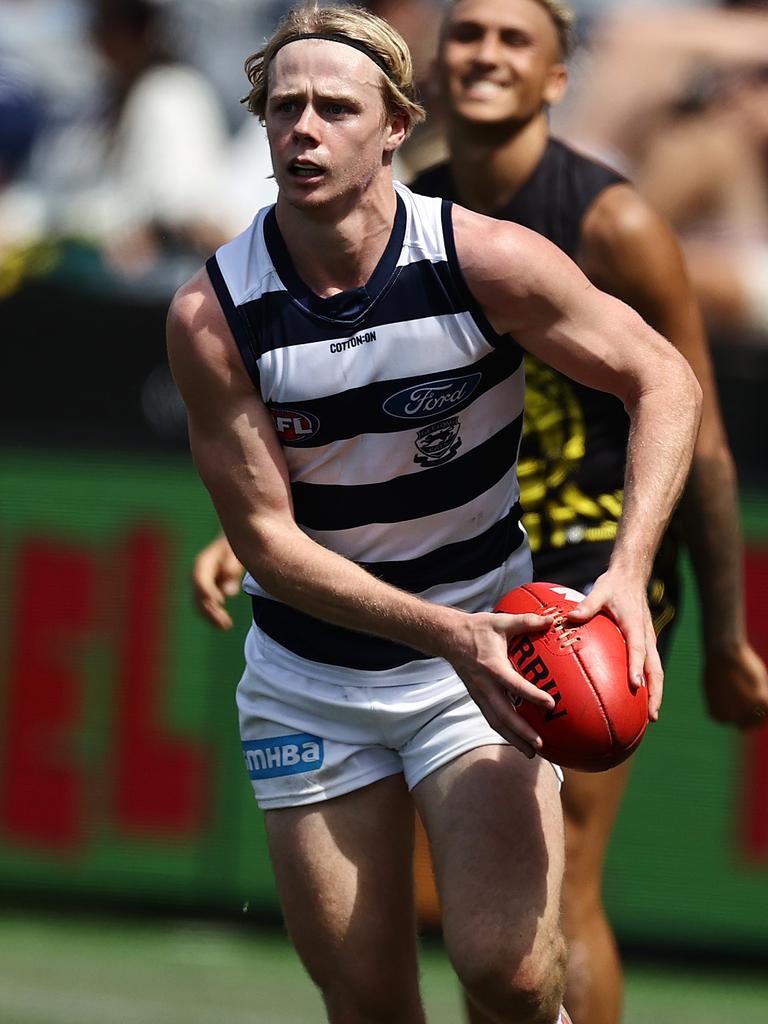 Zach Guthrie has found form but is also out of contract. Gifted Brandan Parfitt would fit nicely into any midfield.

Much maligned by Cats fans, Guthrie has made a leap this year and is enjoying his best season so far. With his brother Cam locked in for a few more years and given the loyalty Geelong has shown him, it’s hard to see Zach leaving. But he is out of contract and defenders who can play both small and tall plus intercept mark don’t grow on trees. If a multi-year offer came, he would have to at least think about it.

As Chris Scott said earlier this year, young midfielders with experience are a sought-after commodity across the league. A selfless tackling machine, Parfitt would fit into any midfield. He told News Corp last month he was keen to stay but until a contract is signed, opponents will be watching this space.

Scott: How Cats can avoid another September failureGeelong’s under 25s ranked: Who is No. 1?Crystal Ball reloaded: Biggest shocks of 2022 season

Geelong has faith Stephens, 21, will be a lock in its engine room in a few years but the first-round choice from Colac his just played the five games across three seasons – all in 2022. He is under contract next year but teams with a need for a potential 10-year inside midfielder may ask the question.