Adelaide has finally rewarded several key Crows who had been forced to find form in the reserves.

Crouch was dropped by the Crows after Round 7 while Milera played in Round 1 after nearly two years out with injury but has been in the SANFL since.

They are among four changes for the Crows, who are seeking to snap a four-match losing streak against Geelong at GMHBA Stadium on Saturday.

Reilly O’Brien gets a recall after his stunning 37 disposal, 11 mark, 42 hit-out and a goal game in the SANFL, while Jordon Butts comes in after last week against St Kilda came too soon for him following him exiting Covid-19 protocols. Matt Crouch is back for the Crows. Picture: James Elsby/AFL Photos via Getty Images

Taylor Walker will miss the clash against the Cats after he entered Covid-19 protocols while Josh Rachele is being managed by the Crows after copping a cork to his thigh against the Saints.

Despite the Crows saying they would like to give Kieran Strachan a run of three to four games as their No. 1 ruckman he has been dropped for O’Brien, while Chayce Jones is also omitted.

This means Nick Murray gets another chance for the Crows while despite Walker being out Matthew Nicks has decided not to go with Elliott Himmelberg - leaving Riley Thilthorpe and Darcy Fogarty as their two tall forwards against the Cats.

Adelaide has moved captain Rory Sloane and wingman Paul Seedsman to its inactive list, opening up two spots for the Crows in the mid-season draft.

Sloane is recovering from a ruptured ACL he suffered in Round 5 while Seedsman is still dealing with ongoing affects of a concussion he suffered in December.

Adelaide list manager Justin Reid said they would be both on the inactive list for the remainder of the season.

“Unfortunately both Rory and Paul are dealing with serious injuries and won’t play again this year,” Reid said.

“Rory has started his rehabilitation from a knee reconstruction and we look forward to him returning to the field next year. Skipper Rory Sloane has been placed on the inactive list by the Crows Picture: Getty Images

“And while Paul is making some progress in his recovery from concussion, he continues to experience symptoms and his health and wellbeing remains the priority.

“By placing both of them on the Inactive List it gives us the flexibility to add to our squad in next week’s Mid-Season Draft should we choose. Our recruiting and list management team will continue to discuss our options before finalising our position ahead of the draft.

“Rory and Paul remain fully supported by the Club and heavily involved with our footy program, and their leadership off the field is invaluable for our young and developing group.”

The Advertiser reported on Tuesday that the Crows were set to make a call on Seedsman’s season. 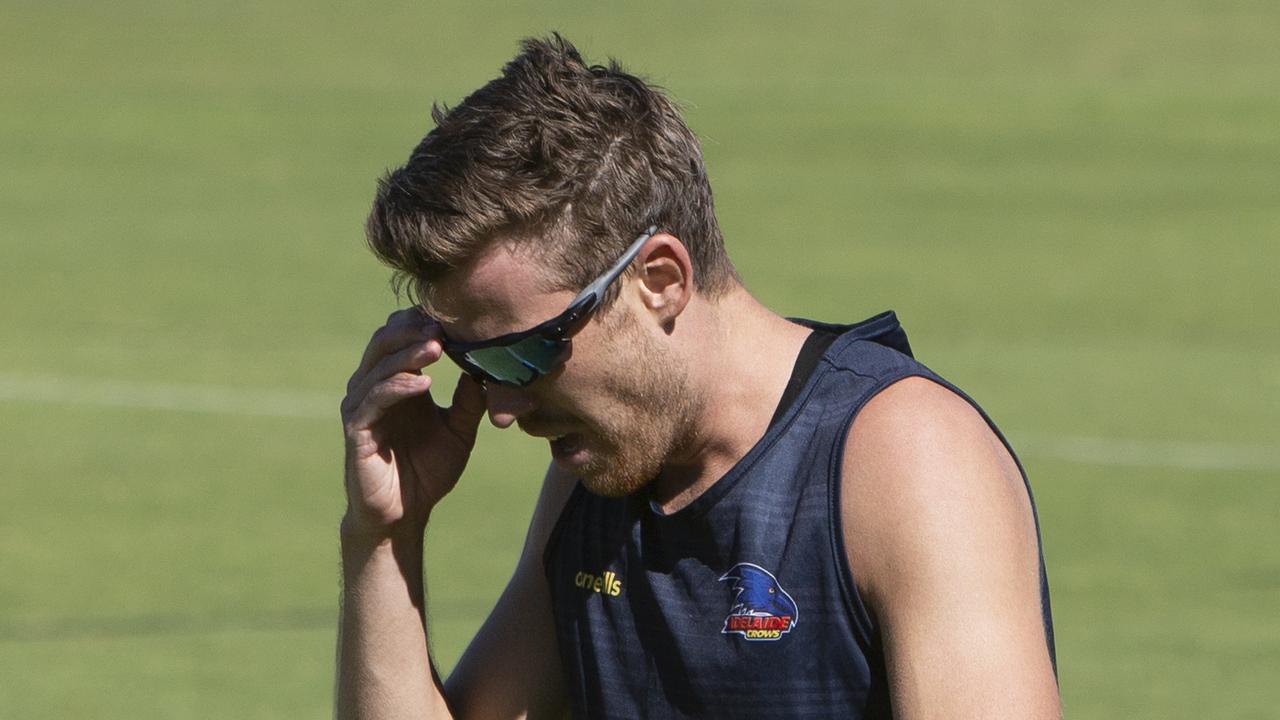 Paul Seedsman has been placed on the inactive list due to persistent concussion symptoms. Picture Emma Brasier

While he had been making some pleasing progress in recent weeks, after going to Melbourne for the second time to visit specialists, it was expected that the Crows would shut Seedsman down for the rest of the season.

He still has a year remaining on his contract after this season but the fact he is still experiencing symptoms from the knee to the head in December does put the 30-year-old’s career under a serious cloud.

Seedsman, who had a career best year in 2021, had to wear sunglasses when running outside at Crows training when he was on the track because of light sensitivity.

Crows explain: young forward left out ‘in his best interest’

Adelaide has lost spearhead Taylor Walker to Covid protocols as it prepares for its clash with Geelong on Saturday.

The Crows forward line has copped a double hit, with confirmation top-draft pick Josh Rachele will be managed after a gruelling start to his debut campaign.

Assistant Coach Scott Burns confirmed Rachele, who has played every game in 2022 after being taken at pick six by the Crows in last year’s draft, needed “a breather”.

Burns said the 19-year-old, who has kicked 15 goals in his debut season, had “tapered off” as the rigours of AFL footy intensified and after copping a corked thigh last weekend against St Kilda needed a rest.

Expected “wet and windy” conditions at Geelong on Saturday helped the Adelaide coaching staff make the decision on Rachele who has kicked just three goals in the past five games after a stunning five-goal debut in Round 1.

“We’ll give Josh a breather,” Burns said on Wednesday.

“He’s done terrifically well, Josh, to come in Round One – you can probably see he’s slightly tapering off (after) a few more knocks and a few more hits.

“But it’s in his best interest to (have) a breather, he won’t play this week.”

Burns said the absence of Walker, who entered health and safety protocols late on Tuesday, would be a hard one to fill.

“He’s been our best in-form key forward, so there’s a hole,” he said.

Despite a mammoth effort in the SANFL last weekend, however, Burns said it wasn’t “obvious” that ruckman Reilly O’Brien would return to play Geelong with the coaching staff happy with the work of Kieran Strachan.

“Reilly was good, really good last week. BUt we are still going through so many things at the moment. There’s a few other sore boys we are waiting to see how they go.

“Selection will go right down to the wire.” Taylor Walker has been ruled out of Adelaide’s Round 11 clash.

Adelaide is set to make a call on Paul Seedsman’s season in the next week.

After a career best season in 2021, making the initial 40-man All-Australian squad, Seedsman has been out of action since December as he continues a battle with concussion symptoms.

The 30-year-old wingman copped a knee to the back of his head during a pre-season marking contest prior to Christmas. Paul Seedsman is yet to play this season after a concussion in December last year. Picture Emma Brasier

Since then he has not gotten further than kicking and running laps, and for a period had been wearing sunglasses to help with light sensitivity, as he dealt with post-concussion symptoms.

The slowness in Seedsman’s recovery also resulted in him going to Melbourne on two separate occasions to see specialists to help better understand his issues.

It is understood the ex-Collingwood player is improving and has taken steps in his recovery.

However it is still considered extremely likely that Seedsman won’t play any footy this year with the Crows expected to take no risks given the length of his lingering concussion symptoms.

Even if he was able to return to full training Seedsman would have to undergo almost a mini pre-season to get even remotely close to being able to play at any level this year given his lack of conditioning. The Crows have until next week to decide whether they put Seedsman on their inactive list.

This would allow them to make a selection at the mid-season draft.

Adelaide could have two picks, with captain Rory Sloane also eligible to go on the inactive list because of his ACL injury.

It is understood the Crows are working through the potential decision, after previously hoping he would be available later this campaign, and will soon make a call on Seedsman’s 2022.

Seedsman is contracted until the end of next season, so if he is shut down this season and can make a full recovery from his concussion symptoms he would have a chance to continue his career post 2023.

Adelaide is also prioritising the development of its younger players.

Seedsman has played 83 games for the Crows since leaving the Pies before the 2016 season.