Dustin Martin is back but Richmond has lost three premiership stars to injury for its blockbuster clash against Geelong on Saturday.

Trent Cotchin (clavicle), Noah Balta (hamstring) and Kane Lambert (hip) are all out of the team that defeated Carlton last week, along with Hugo Ralphsmith (omitted).

Martin returns after missing the Blues clash with illness alongside ruckman Ivan Soldo and midfielder Jack Ross, who was best on ground in the VFL. Last week’s medi-sub Maurice Rioli Jr is back in the starting 22 after making a big impact in his final-quarter cameo.

SCROLL DOWN FOR ALL THE ROUND 15 TEAMS

But there won’t be an anticipated Martin versus Patrick Dangerfield match-up after Geelong opted against recalling its superstar.

Dangerfield hasn’t played since hurting his calf in round 10, but earlier this week coach Chris Scott said “every indication is that he’ll be ready to go”.

Instead, the Cats have added Gary Rohan, Jack Henry and Max Holme. Luke Dalhaus and Cooper Stephens were dropped and Zac Guthrie is being managed.

Football manager Simon Lloyd said the decision was made after consultation with medical staff, coaches and Dangerfield himself.

“While we had been confident that Patrick would play on Saturday, the coaches and medical team had earmarked making a final call after Wednesday’s main training session, and the decision has been made today to give him an opportunity to further build his football and training loads,” Lloyd said.

“We have been open this season in our tailored approach to players returning from injury and will continue with this approach for the long-term benefit and preparation of the team.” 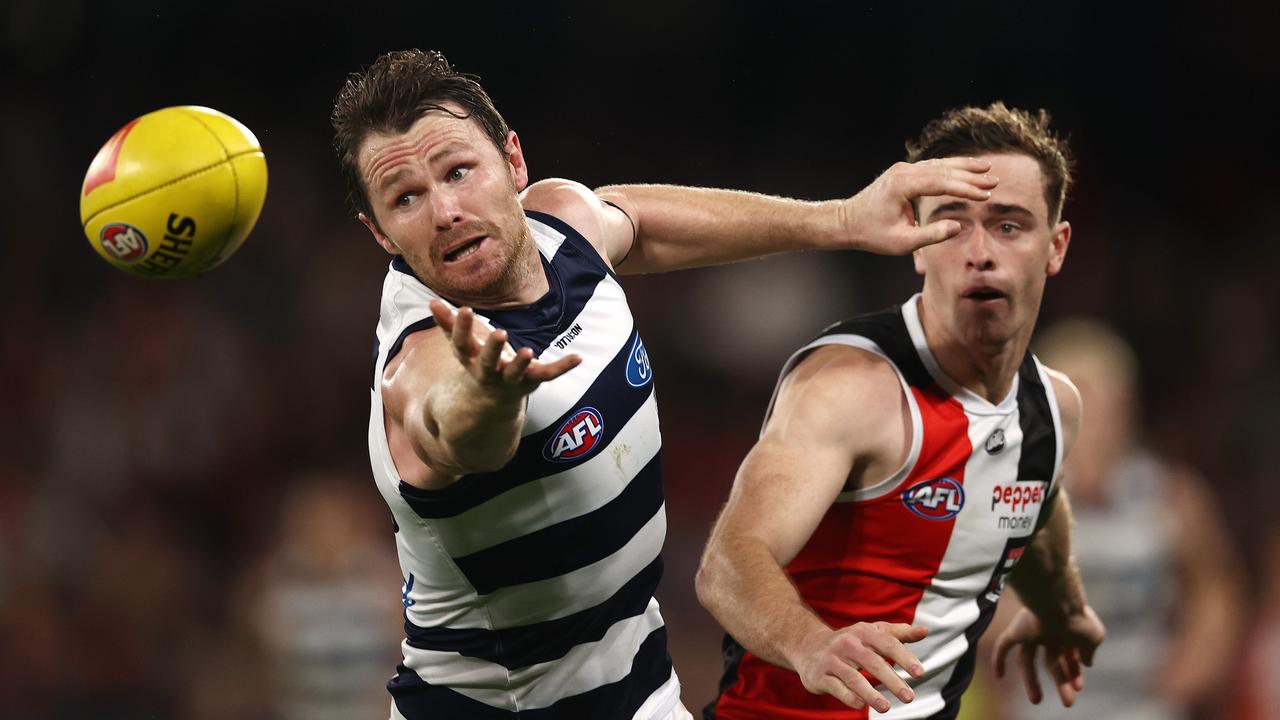 Meanwhile, St Kilda captain Jack Steele is back from a shoulder injury for the Saints’ must-win game against Sydney.

But Brad Hill won’t play due to personal reasons, Paddy Ryder has been managed and Jack Higgins was dropped. The Swans regain ruckman Tom Hickey.

Carlton has named Brodie Kemp and Josh Honey but lost Sam Durdin and Jack Martin to injury for its clash against Fremantle.

Jordan De Goey is out of Collingwood team to face GWS on Sunday as he deals with the fallout of his mid-season Bail trip. Trey Ruscoe, Caleb Poulter, Aiden Begg and Isaac Chugg have been included in the 25-man squad that will be trimmed to 22 on Friday.

The Giants have made seven changes with Tim Taranto, Phil Davis, Daniel Lloyd and mid-season draft pick Wayne Derkson – an athletic key forward – among the ins.

Kyle Langford will play his first game for Essendon since injuring his hamstring in round 1. Will Snelling and Nick Bryan are also into the Bombers team to face West Coast, and Darcy Parish will miss another week with a calf injury. Andrew McGrath (adductor) is out injured and Brayden Ham and Andrew Phillips have been omitted.

In other teams news, Hawthorn lost Will Day to Health and Safety Protocols but named mid-season draft pick James Blanck for his AFL debut. On Thursday night, Steven May will be out to repay Melbourne when he returns to the team to face Brisbane at the MCG.

The Dees recalled forward Sam Weideman along with youngster Toby Bedford, and will back young gun Luke Jackson to shoulder the ruck duties.

Mitch Brown (omitted) and Daniel Turner (injured) will also go out of the side, along with last week’s medi-sub Kade Chandler.

May returns from the one-match club suspension following his restaurant brawl with teammate Jake Melksham.

The Demons have lost their past three matches and face a second-placed Lions side, which will be without skipper Dayne Zorko (hamstring), Darcy Gardiner (lungs) and Zac Bailey (HS protocol), while medi-sub Darcy Fort has also lost his spot.

Jack Payne, Tom Berry and James Tunstill come into the side, with Darcy Fort named as the sub.

Weitering closes on return from injury

Carlton’s most important defender Jacob Weitering is edging closer to a return from his shoulder injury and could be back in time to take on St Kilda – and Max King – in round 16.

It is understood Weitering has made significant progress in recent weeks following his surgery and if he can get the medical go-ahead he is a chance of taking on the Saints.

Weitering was subbed out of the opening term of the Blues’ loss to Collingwood last month.

He was initially ruled out for six matches, which would have taken him through to the West Coast game in round 17, but he is now given a chance to return a week earlier than expected.

The vice-captain’s diligence in his preparation and rehabilitation has given him a 50-50 chance of playing against St Kilda on Friday week, which would be an enormous fillip for the injury-ravaged Blues defence.

The Blues will be missing Weitering, Oscar McDonald, Caleb Marchbank, Mitch McGovern, Zac Williams, Luke Parks and Sam Durdin when they take on the Dockers on Saturday. Jacob Weitering is closing on a return for the Blues. Picture: Michael Klein

Michael Voss has had to put together a makeshift defence in recent weeks, but the leadership and running capacity of smaller defenders Sam Docherty and Adam Saad has helped mitigate some of the pain.

Weitering has been participating in some of the training drills across the past week, but will aim to increase the tempo early next week if he gets the go-ahead from the medical and conditioning team.

Last year’s Coleman Medallist Harry McKay said Weitering had surprised teammates with how well he has come back.

“I don’t want to jinx Weitering, but he’s on track for a positive return, I’m not exactly sure (when he is back),” McKay said on SEN.

“The other day we had training and I saw him barking orders and running around and I had to look twice because he was moving really well.”