Melbourne has entered the race for free agent Karl Amon in an ominous sign for fellow suitors. The Power wingman seems destined to be traded to Victoria. Here’s the latest.

Port Adelaide could end up benefiting from the massive Victorian interest in wingman Karl Amon as Melbourne joins the list of Victorian clubs clamouring for his services.

The Herald Sun revealed last month Amon has clubs including St Kilda keen to secure the hard-running left-footer who will officially become an unrestricted free agent this year.

The Saints and Hawks were keen on him before he signed his last contract while the Demons are also understood to have lodged some interest in a member of last year’s All Australian 40.

Port Adelaide are keen to re-sign him given his significant talent but do have some depth in that position.

If he were to leave for an offer of around five seasons and $650,000 or even four years at $700,000 it might be enough to trigger first-round compensation.

On current ladder position that would hand Port Adelaide the seventh pick in the national draft.

But even if the Power were able to secure end-of-first-round compensation for Amon it would be good value for a player taken at pick 68 in the 2013 national draft.

The Power have interest in a strong-bodied inside midfielder who can kick goals in the Jordan De Goey-Elliot Yeo mould. 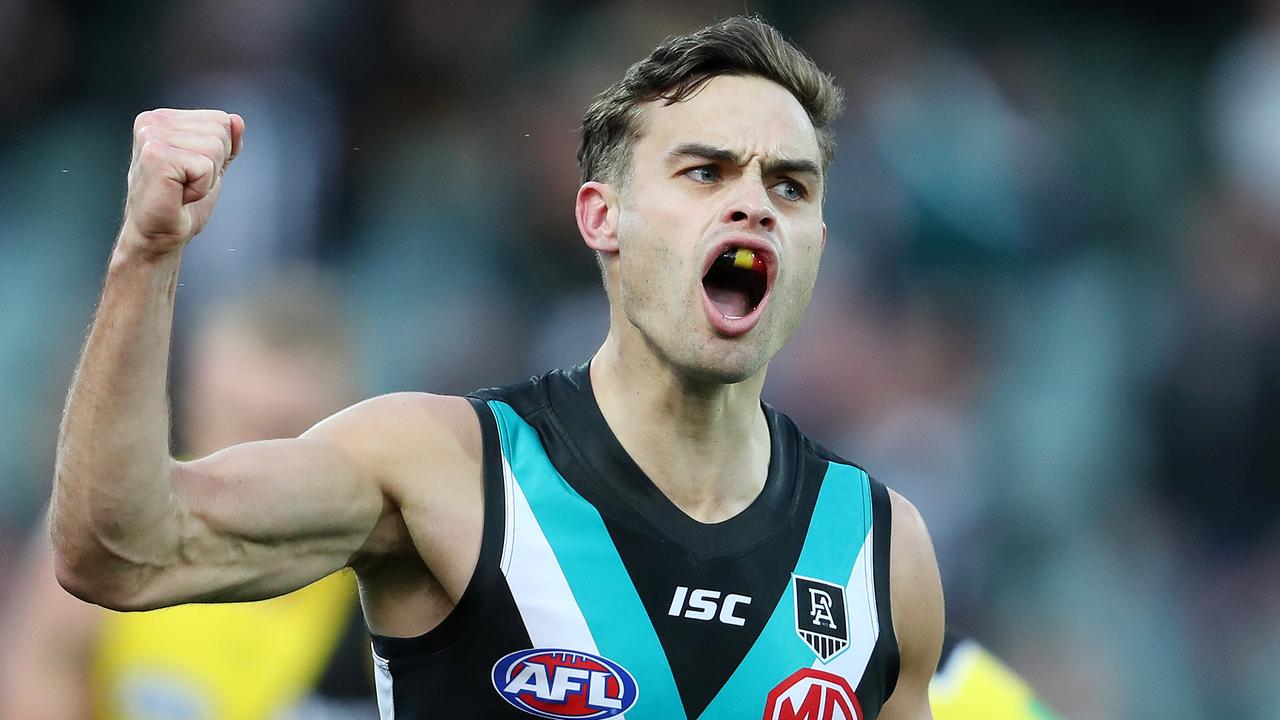 Karl Amon seems destined to be traded to a Victorian club.

It remains to be seen if the Pies midfielder will stay for less at Collingwood or chase a massive deal.

And Port Adelaide has always had interest in Gold Coast’s Izak Rankine, who continues to underwhelm at the Suns.

The Power have a precedent of not overpaying players and being prepared to let players go rather than matching significant rival offers.

Peter Ladhams left for Sydney last year, Dougal Howard left for St Kilda in 2019 and they were happy to let Chad Wingard and Jared Polec leave for bigger offers in 2018.

Exciting small forward Rankine said in the pre-season he was determined to stay on the coast with his contract sure to take care of itself, but after 4.1 in round 1 he has kicked two goals in four matches since.

Had he jumped out of the blocks this year he surely would have agreed to a mid-season contract extension but his early struggles will complicate that deal.

The Power have Robbie Gray and Travis Boak out of contract this year and while they will both play on there is a pressing need to find successors for that brilliant pair.

Connor Rozee’s slashing centre square work in the past 10 quarters since being injected into that role at half time against Carlton has shown he has the capacity to replace Boak as a long-time midfielder.

Carlton could join Geelong as one of the potential suitors for veteran North Melbourne ruckman Todd Goldstein at the end of the year.

It is understood the Blues have discussed internally the prospect of bringing in an experienced ruckman as a back-up to assist Marc Pittonet and Tom De Koning next year - but only at the right price.

Goldstein will turn 34 in July and is tipped to be on the move in 2023 as an unrestricted free agent.

He has previously knocked back the overtures of several rival clubs, including rejecting a four-year offer to join the Cats in 2019.

But with the Kangaroos sitting on the bottom of the ladder with only one win this year and with Tristan Xerri challenging as the club’s No. 1 ruckman, Goldstein could be headed elsewhere.

He has been a great servant of the club across 280 games, winning All-Australian selection and the club best and fairest in 2015.

A number of key ruckmen have been sidelined due to injury this season, which is likely to increase the premium on big men come the free agency and trade period.

Pittonet’s injury has only solidified the Blues’ belief that they could do with some extra ruck insurance given De Koning is highly-rated, but is still a work in progress in the ruck.

Clubs such as Carlton and Geelong would be looking at a heavily incentive-based agreement with Goldstein if he was to move, mindful of his age.

Goldstein’s durability has seen him play 20 or more games in 11 of the past 13 seasons, and never less than 17 since his second season in 2009. 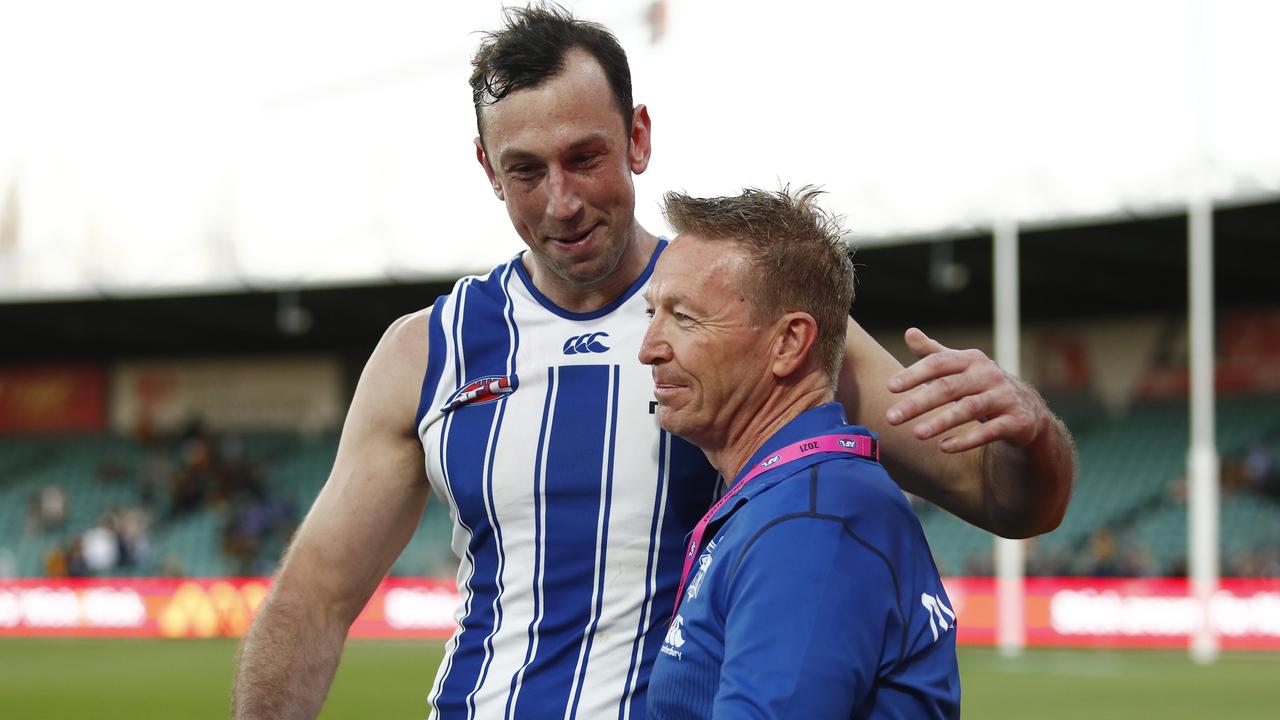 Todd Goldstein is seemingly on the way out of North Melbourne. 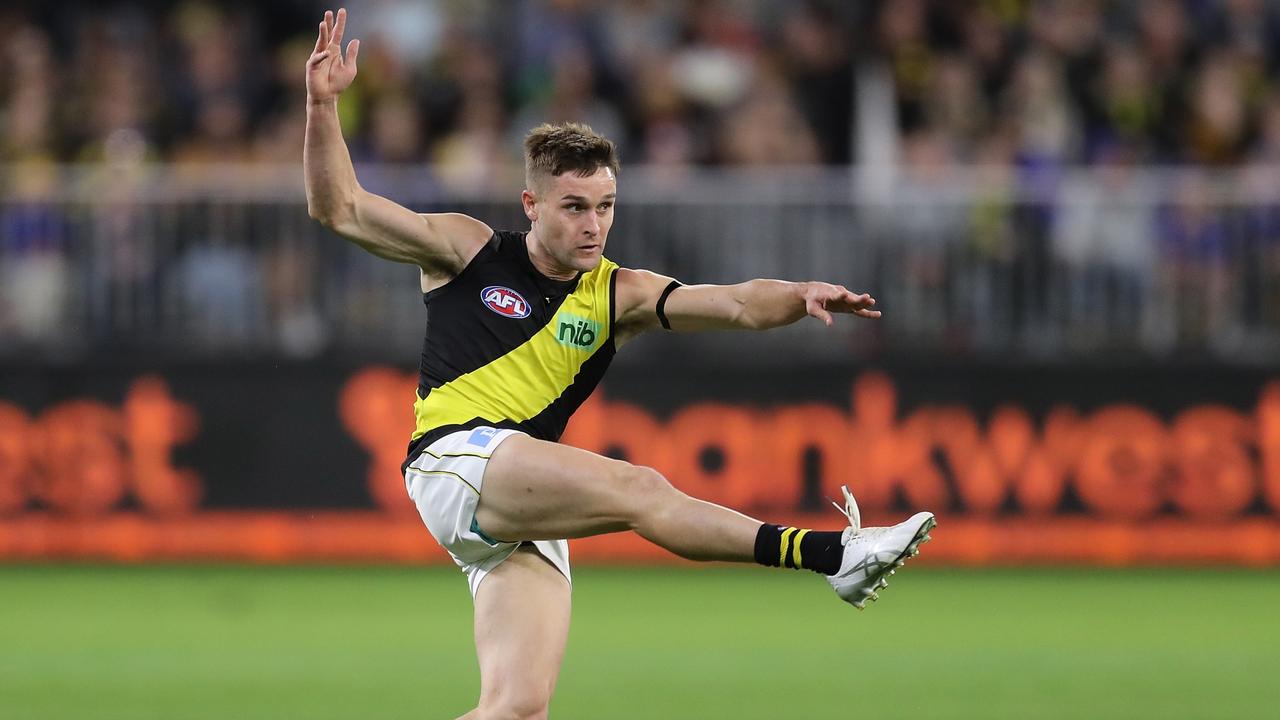 Richmond premiership hero Jayden Short has shunned free agency to be a “Tiger for life” by signing a monster five-year contract extension.

The 2020 best and fairest winner, who qualified as a free agent under AFL rules, said it was hard to see himself being anywhere other than Richmond.

He will remain at Punt Road until at least the end of 2027 in a career commitment to the Tigers.

“It is really exciting. I am very lucky and grateful for the club giving me a long-term contract,” he said.

“I want to repay the club; I have had some very good times here already, and I am looking forward to the next five years.”

A dual-premiership Tiger after being drafted to Richmond in the 2014 Rookie Draft, Short has played 121 games and said his best was yet to come.

“I started as a small little chubby kid, probably just trying to find my way, and I have had some great people around me that have taught me how to be an AFL footballer,” he said.

“It has been a good journey and something I am very proud of; now I am looking forward to building on that and continuing to try and get better each year.”

Richmond will take on traditional rivals Collingwood at the MCG on Saturday, with Short coming off his best game for the season against the Eagles last week after being moved into the midfield.

The Tigers will also be bolstered on Saturday by the return of triple Norm Smith medallist Dustin Martin for the first time since round 1 as he returns from personal leave.

“He’s going to be not at his optimal, but he’s certainly trained reasonably hard, as hard as he could without being in a team environment,” Richmond coach Damien Hardwick said.

“We‘re pleasantly surprised by how he’s moving and how he’s operating thus far.

“At 50 per cent Dustin Martin‘s still a pretty good player in our books.”

WHY PIES COULD BE BETTER OFF IF DE GOEY WALKS

Jordan De Goey sure knows how to time a contract re-extension to perfection.

As he approaches the negotiations on a long-term deal that will financially set him up for life, he is in the form of his AFL career.

Champion Data rates him the fourth best mid-forward in the competition behind only Isaac Heeney, Shai Bolton and Marcus Bontempelli, even taking into account his gastro-influenced 11-possession game last week.

There is a way in which his contract negotiations progress in the kind of no-fuss, effortless manner not usually associated with the De Goey circus.

Collingwood, which has already promised it won’t break the bank to sign him, offers him $800,000 a year over five seasons. His manager counters at $950,000 a season and they settle on a happy compromise at $875,000 with a clause for future CBA rises.

It means everyone goes home happy with De Goey — who wants to stay — and Collingwood — which very much would like to keep him at an affordable cost.

If he plays his cards right, he’ll be a player who is already earning close to $800,000, plays at the Pies until 31 then signs another deal which means he’s earned around $10 million from footy alone. Jordan De Goey is in the form of his career as he negotiates a new deal at Collingwood. Picture: AFL Photos/Getty Images

But the strong chatter of the week from list and player managers is that there are clubs prepared to knock De Goey’s socks off with massive offers, given his free agency status.

Any club including Collingwood will always be worried about the risk profile given his recent New York court case, which is why another mid-season infraction would be catastrophic. But clubs have always shown they will invest in talent despite the risk — think Richmond with Ben Cousins and Brisbane with varying levels of success with Brendan Fevola and then an injury-prone Joe Daniher.

Everyone wants a big-bodied mid-forward who can win centre square clearances then go forward to kick goals.

It is why West Coast’s Elliot Yeo, at age 28 with a banged up body and two years on his deal, has drawn initial inquiries this week.

Everyone wants a ‘striker’ and enough clubs believe they are close enough to the flag window to go out and get one, especially if they are a free agent.

Consider De Goey in teams like St Kilda, Port Adelaide or Essendon, who are either close to the window (the Saints), not far from losing veterans (Robbie Gray, Travis Boak) or need a midfield reinvention (Essendon).

If you think clubs won’t pay $1 million for De Goey you forget that they will pay $800,000-plus for flankers and wingman like Brad Hill and Zac Williams.

And the bottom line is this: Collingwood shouldn’t be shattered if De Goey is offered a riotous deal of $1 million over six years elsewhere and don’t necessarily need to match it.

It would go against their muddled strategy of January 2020 when the list management group considered their big three — De Goey, Darcy Moore, Grundy — and made clear the ruckman was third of those priorities, yet still gave him a $7 million, seven-year deal.

But consider the possibilities if De Goey leaves. Collingwood has other options if De Goey decides to depart the club. Picture: AFL Photos/Getty Images

Collingwood secures a likely top-12 compensation pick for this year (depending on ladder position) and saves $900,000 in cap space for future seasons.

The reality is that Collingwood, the fifth-oldest list in the comp by games and age, will actually only be in the window when they get 60 games into Nick Daicos, Ollie Henry, Finn Macrae, Jack Ginnivan, Beau McCreery and co.

That is no reason to jettison De Goey, who by that stage might only be 30 years of age and at the peak of his powers.

But they could effectively turn one player into two by taking the De Goey compo pick then in two seasons using that cash to secure their own 26-year-old free agent.

It could well be a key position forward because, for all his brilliance, Brodie Mihocek will be 30 next year and has only averaged 1.6 goals across his career.

The better De Goey plays this year — further distancing himself from his summer controversies — the higher his price rises.

Collingwood should consider their glass is half full because they can benefit whether he stays or goes.