AFL 2022: Who comes out on top on the AFL form ladder leading into finals?

Who has been ravaged by injury in recent weeks as the finals race heats up? The stats reveal some sides near the top have had a charmed run.

Former Essendon captain Brendon Goddard says the Bombers’ 2022 campaign has not been a totally “lost” year after the team emerged as one of the AFL’s top late-season movers, according to Champion Data’s form ladder.

As the final eight takes shape as the league nears the end of the home-and-away season, the ladder based on form has thrust the Bombers into the top eight.

Sitting 14th on the premiership ladder, the Bombers are up nine positions to sit fifth on the form ladder on the back of four wins from their past six matches.

The Bombers’ record over the past six rounds matches that of premier Melbourne, which sits fourth on the form ladder after bouncing back from some shaky mid-season results.

Geelong and Collingwood are primed for their finals charge, top-four challenger Fremantle has slipped, while Sydney is clicking into gear at the right time of the season based on form. The Bombers have hit form at the back end of the season. Picture: Michael Willson/AFL Photos via Getty Images

A Champion Data analysis based on results from Rounds 15 to 20 has found the Cats and Magpies as the only unbeaten teams at the top of the form ladder, while the Swans are just behind in third with the one loss.

The Magpies are up one position on the form ladder from the premiership standings, but all of their wins have come against teams in the bottom 10 during that period.

The Bombers’ results in the past six rounds have included victories over Sydney and the Brisbane Lions.

While acknowledging the Bombers’ on-field issues at the start of the season “dragged on for too long”, Goddard said the team’s stronger recent form showed the players and coaches were now “getting it right” to build on for 2023.

“It depends what glasses you have on, if it’s the glass half-full or half empty conversation,” Goddard said.

“Most supporters would say it’s a wasted year because they have very high expectations.

“But I was trying to quell expectations leading into this year based on last year … (they were) not so much outperforming themselves, but a lot of things went right last year.

“A bit of Collingwood, this year, (they were) winning all the close games, a softer draw because of their position the year before, so that was a little bit misleading last year.

“In saying that, I think they have been really disappointing, particularly that first 10 or 12 weeks, just how they were losing more so than anything … it just felt like it dragged on for too long.

“But they’ve been trending in the right direction for about eight weeks and I think their form … has been reflective of the work and the things they have focused on during the week.

“I see it as a real positive. The coaches and the players are getting it right and (if) they are reviewing each game in the right manner and being honest with one another, it can’t be a lost kind of season most of the year.

“It almost felt like they conceded to taking two steps back to go forward.” After the Bombers bombed out in an elimination final loss to the Western Bulldogs last year, Goddard said he had expected the team to be among the group challenging for the bottom two positions in the top eight again.

“I thought that’s where they were at …. I thought they should have been in the mix or in the hunt towards the end of the year.”

Geelong tops the premiership and form ladder on the back of a 10-game winning streak, having won more quarters of football (18) than any other team between rounds 15 and 20.

Goddard felt the Cats’ and Demons’ best was above any other side in the competition.

“Collingwood is riding this wave, but respectfully, they are just not ready, I don’t think,” Goddard said.

“When you look holistically at their list and experience and guys that have played finals, they obviously have got a number of guys that have.

“Melbourne’s performance last week was a bit of a statement. Those two teams are the standout, for mine. 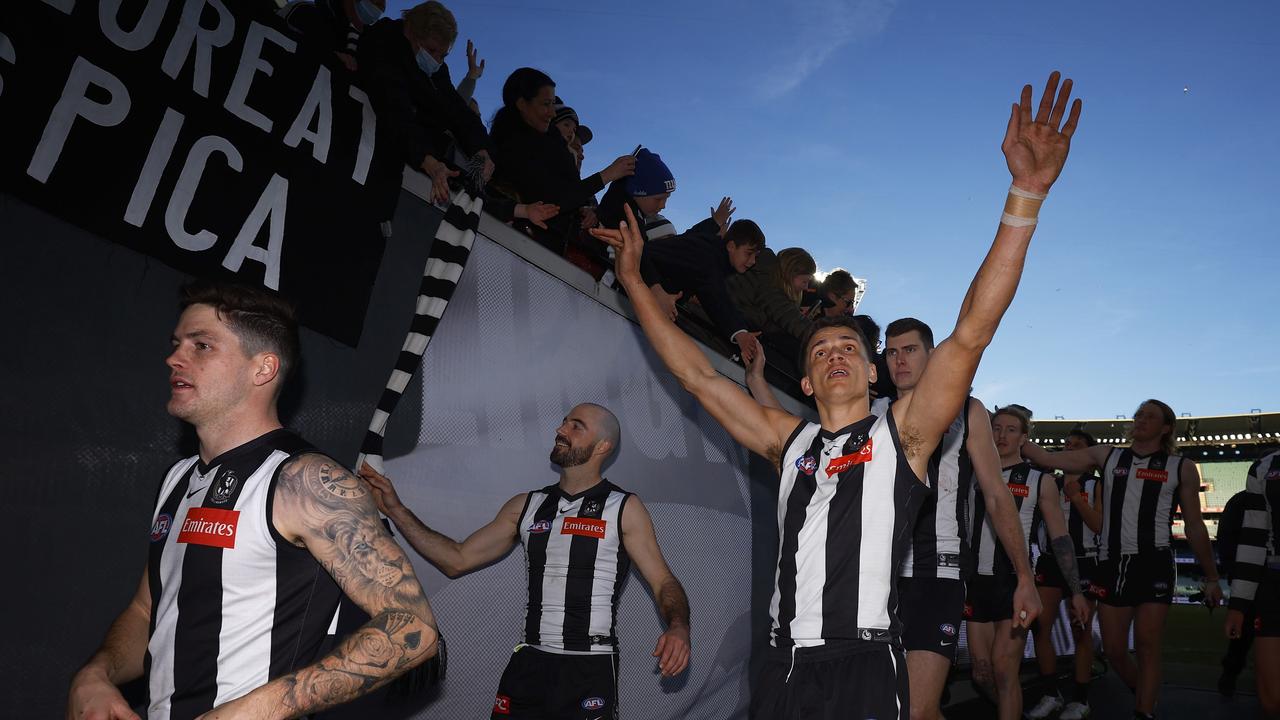 All of Collingwood’s wins have come against bottom-10 opponents. Picture: Daniel Pockett/Getty Images

“Collingwood might go on and make a first final, second final and potentially make a prelim but I just see it hard for the feel-good story of Collingwood to keep rolling.”

Behind Essendon, Hawthorn – with a 3-3 record – has been the other big mover on the form ladder, up six positions from 13th in the premiership standings.

But the Brisbane Lions (3-3), who sit fifth in the premiership standings, have fallen to eighth on the form ladder, while sixth-placed Fremantle (2-3-1) has slipped to 12th based on form.

Sitting just outside the top eight on the premiership table as it fights for a place in the finals, Richmond (2-3-1) has dropped to 11th on the form ladder.

The Swans have benefited the most from a consistent line-up in their past six matches, having only six matches lost to its best 22 during that period.

Originally published as AFL 2022: Who comes out on top on the AFL form ladder leading into finals?