AFL Draft 2022: All the latest news, squad announcements and standouts

The top mid-season draft prospects are starting to emerge and a high-flying forward from the SANFL continues to make AFL recruiters take note.

Bauer, who joined the Roosters from the Swans Academy after being overlooked in last year’s draft, booted another three goals on his return against West Adelaide, taking his tally to 13 in just three games, to rank equal-third in the SANFL after five rounds.

The 19-year-old high-flyer started the year in the reserves, after a last-minute move to South Australia, but he put his name in front of AFL recruiters with a commanding five-goal performance on debut against the Crows in Round 2. He followed it up a week later with another five majors and three outstanding contested marks - before suffering a delayed concussion - to further highlight his aerial prowess and confirm what North Adelaide is thinking about his future.

“I’m not sure how much longer we’re going to see him at SANFL level,” Roosters reserves and development coach Darren Reeves told The Advertiser after Bauer’s second five-goal haul against Central.

“He has great hands, takes marks at the highest point, is an excellent kick and is such an exciting talent that I’m sure AFL clubs are starting to sniff around.”

The 191cm Bauer has attracted significant AFL attention ahead of June’s mid-season draft – and it’s not hard to see why.

“Coming up through the Swans Academy, Nick Davis (youth development coach) always said that to get drafted you have to be elite at one thing, so my marking is my go-to trait and what I pride myself most on,’’ Bauer said.

How the NGA rule changes will hit Dees, Saints

A change in Next Generation Academy rules appears set to deny Melbourne and St Kilda the chance to snare two promising draft prospects who are rising fast, including a distributing defender likened to young Demons sensation Jake Bowey.

Clubs are unable to match rival NGA bids inside the first 40 picks of the 2022 draft – up from the top 20 last year – with Finn Emile-Brennan (tied to Demons) and Cam MacKenzie (Saints) surging into second-round calculations after impressive starts to the NAB League season.

St Kilda was a major beneficiary from its NGA program last year with midfield pair Mitch Owens (pick 33) and Marcus Windhager (47) joining the club through the national draft, along with Jack Peris and Josiah Kyle as rookies. Defender Emile-Brennan, who qualifies as an NGA through his Mauritian mother, has been compared to Jake Bowey by his Dandenong Stingrays coach Nick Cox for his slender build and traits, with the 181cm, 62kg defender possessing elite kicking and poise under pressure.

Called up to the Vic Country line-up by popular demand to face the Young Guns side, the Stingray tallied 25 disposals including 19 kicks (at 78.9 per cent efficiency), five intercepts and 120 SuperCoach points in his most recent NAB League outing against the Geelong Falcons.

And as his draft stocks rise, the chances of him joining Bowey in the Demons’ defence decreases. 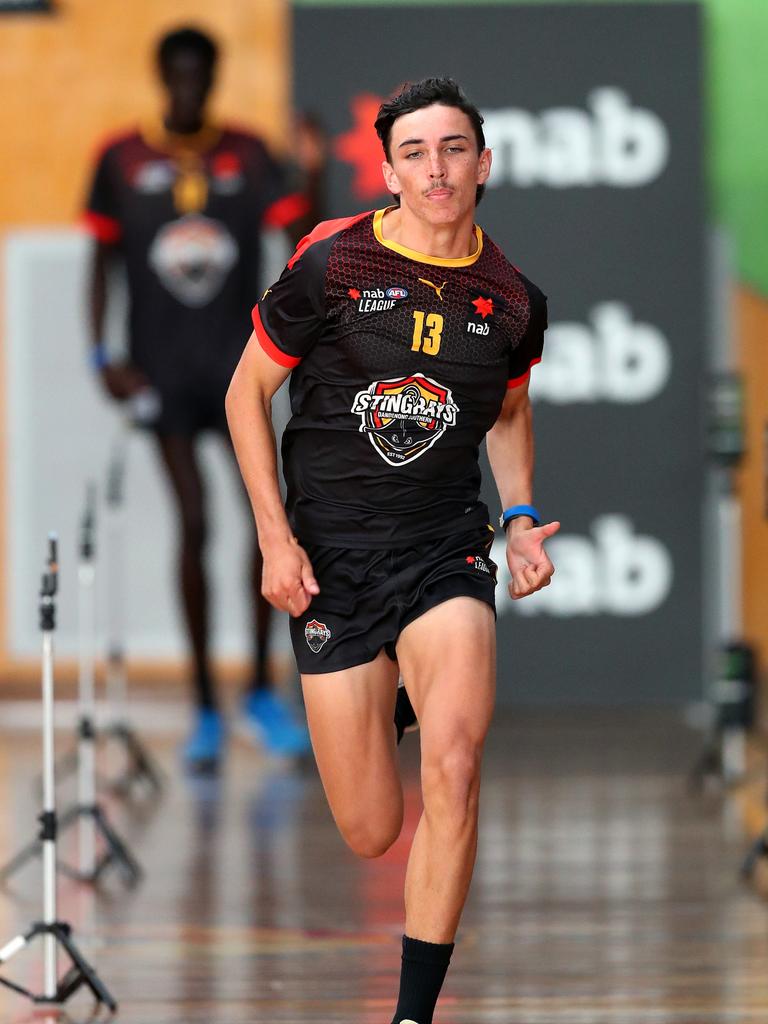 Jake Bowey is renowned for his elite ball use. Picture: AFL Photos/Getty Images

Meanwhile, 187cm prospect MacKenzie has improved with every game he’s played for the Sandringham Dragons, spending more time in the midfield alongside No.1 contender Will Ashcroft and averaging 21.8 disposals and 8.5 score involvements per game.

Dandenong Stingrays midfielder Jai Culley is firming to be selected in next month’s mid-season draft as interest ramps up from AFL clubs.

The 192cm inside midfielder has been nominated by 13 clubs to play for the Young Guns side, featuring 23 eligible mid-season draft hopefuls from Victoria who will take on Vic Metro and Vic Country across the next two weekends.

SCROLL DOWN TO SEE THE FULL SQUADS AND CLUB NOMINATIONS

Culley burst out of the blocks in his first two NAB League games this season, – averaging 24.5 disposals and two goals – before sitting out the last three matches with a minor shoulder injury, but the setback has done nothing to deter clubs.

Playing predominantly as a medium forward last year, a blistering off-season has seen Culley transform into a bullocking midfielder who can hit the scoreboard, having the scope to make an impact this year. Jai Culley is in the sights of clubs. Picture: AFL Photos/Getty Images

Sandringham Dragons pair Max Ramsden, an athletic 202cm ruckman and Hugo Kall-Kahan, a speedy goal kicker, have generated strong interest with both put forward by 16 clubs to play in the representative matches – the most of any in the squad.

Ramsden is in the mould of Dragons export and 2021 No.1 mid-season draft pick Jacob Edwards as a late-developing tall, possessing a remarkable tank that enables him to become an extra midfielder around the ground.

Smooth moving Western Jets defender Massimo D’Ambrossio, who has featured at VFL level for Richmond this year, has been nominated by 13 clubs after an impressive start to the year, averaging 27.8 disposals and 18.8 kicks at 76 per cent efficiency. Jamieson Ballantyne is among the overlooked draft hopefuls in the squad. Picture: AFL Photos/Getty Images

The Young Guns side features overlooked 2021 draft prospects Ballantyne, Tyreece Leiu, who trained with Carlton over the summer for a list spot, Corey Preston and Charlie Molan.

Midfielder Zavier Maher, who was considered unlucky to be left on the board in the 2020 draft and is now playing for Carlton’s VFL side, is also among the squad.

The Young Guns’ clash against Vic Metro kicks off at 4:30pm at Avalon Airport Oval in Werribee

The Young Guns will face off against Vic Metro on Saturday at Werribee’s Avalon Airport Oval at 4:30pm, and clash with Vic Country on Sunday Sunday May 15th.

LAND OF THE GIANTS

West Adelaide key-forward Harry Lemmey is the early pick to be the first tall taken in a draft set to be dominated by the big men, but he’s now facing competition from inside his own four walls.

After a blistering start to the SANFL under-18 season, Bloods teammate Tom Scully is rising up draft boards quickly.

The mobile 204cm forward, who spent time in the ruck during his bottom-age season, has booted a remarkable 33 goals in the opening six rounds of the under-18 competition – 13 more than any other player. 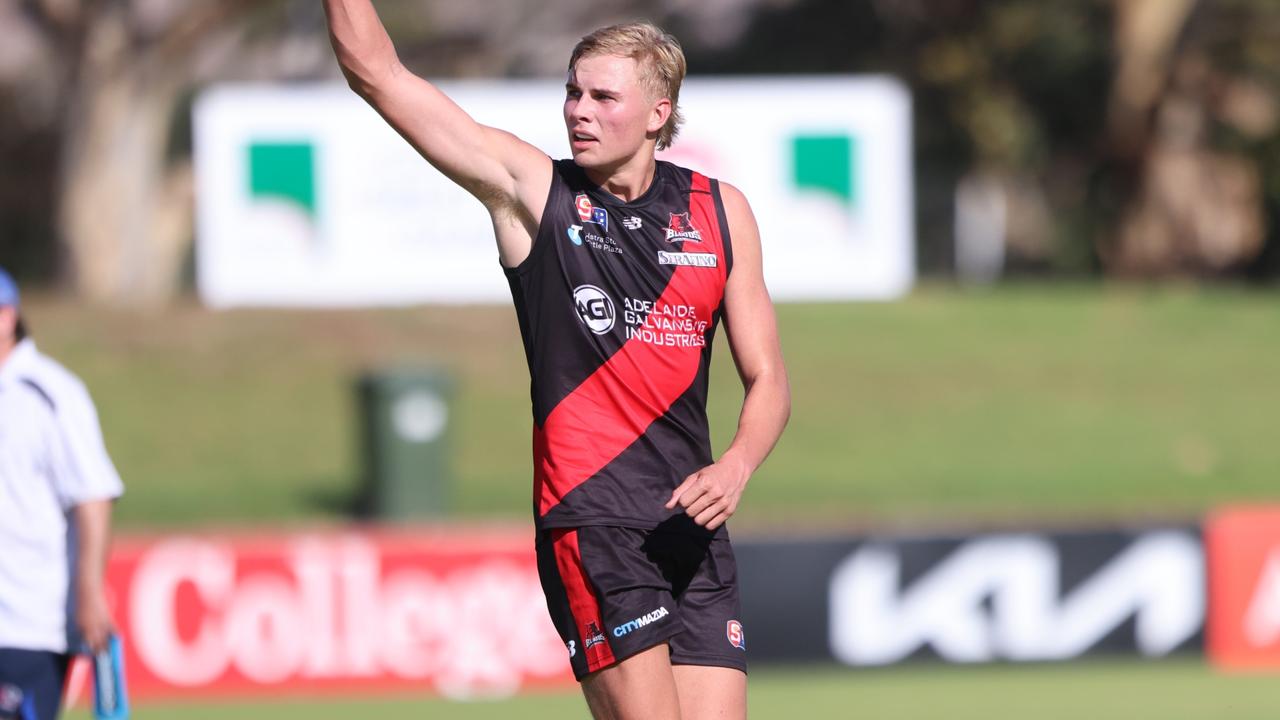 Harry Lemmey is the early pick to be the first tall taken in the draft. Picture Cory Sutton/SANFL

With his height and reach, Scully has been unstoppable in the air, taking 24 contested marks in six matches. The next-best player has 16.

The 17-year-old’s running patterns make him equally as hard to stop on the lead, too, with Scully recording a total of 39 marks inside-50.

And his ability to win the ball at ground level for a player of his standing has also impressed onlookers so far in 2022.

“The potential for Tom to continue to develop over the next 12 to 24 months is quite big,” West Adelaide under-18 coach Paul Streatfield told The Advertiser.

“It’s pretty unusual to find someone as tall as him that is as co-ordinated with their kicking, but also as good at ground level as what he is.

“There’s no obvious gap in his game and I don’t think he’s yet worked out exactly how good he could be.”

It’s set to be a big another draft for the Bloods - the club that delivered Riley Thilthorpe to the Crows in 2020 - with 18-year-old Kobe Ryan impressing in his senior debut on Saturday.

The classy midfielder has followed on from his standout bottom-age season to average 156 Champion Data ranking points at under-18 level this year, and looms as a first-round contender.

Skillful ruckman Harry Barnett is another West Adelaide tall on the radar.

The prodigious 187cm midfielder, who has dominated the opening month of the NAB League, continued in a similar vein at state league level with 24 disposals, 17 uncontested possessions, nine tackles and six inside 50s in a well-rounded performance from the highly-touted talent.

The son of triple premiership Lion Marcus Ashcroft is currently training with Brisbane and playing with their VFL side before returning to the Sandringham Dragons, but he is yet to commit to the club as a father-son.

While Ashcroft is a familiar name to draft watchers, Steely Green is a rock star name we are going to hear a lot more about after his stellar form at WAFL senior level. Will Ashcroft impressed on VFL debut for the Lions. Picture: Getty Images

The classy 178cm midfielder has managed to break into the reigning premier South Fremantle’s round 1 side and is thriving, putting his footy smarts and skilful ball-use on display for recruiters against seasoned bodies.

The early draft bolter finished with a formidable 25 disposals, five tackles and four clearances on WAFL debut and backed it up with 20 touches in round 2.

Athletic defender Reuben Ginbey is another WA prospect who has boosted his stocks following a promotion to East Perth’s senior side, impressing as a role player down back.

At 189cm, Ginbey boasts electric speed, a strong endurance base and reads the play well in defence.

Clubs will have the opportunity to select the best mature-age and overlooked 2021 draft hopefuls in the upcoming mid-season draft, which takes place after the completion of round 11 on Wednesday June 1.

Clubs will be required to have an available rookie list spot by 5:00pm on May 31st to take part.

Listed players with long-term injuries are able to be moved to the inactive list to free up spots.

The draft will take place in reverse ladder order, meaning West Coast, North Melbourne and Essendon — all sitting 1-6 — remain in contention for the No.1 pick of the mid-season draft.

However, a player who has been delisted cannot be selected by their original club if they failed to nominate for the most recent drafting period.

Originally published as AFL Draft 2022: All the latest news, squad announcements and standouts