The national combine is back on this year, and 67 AFL Draft hopefuls have received an invitation. Here are the bolters and top prospects clubs want to see in action.

A quartet of father-son prospects headline a list of 67 standout AFL draft hopefuls who have been invited to this year’s national combine.

After two years of purely state-based combines due to Covid-19 border restrictions, the AFL has revived its traditional national combine, which will be held in Melbourne from October 7-9.

Players from Victoria – which historically produces about half of all AFL draftees – make up almost half of the invitees with 33.

Thirteen players have been invited from South Australia, 12 from Western Australia and nine players hail from the other states and territories. 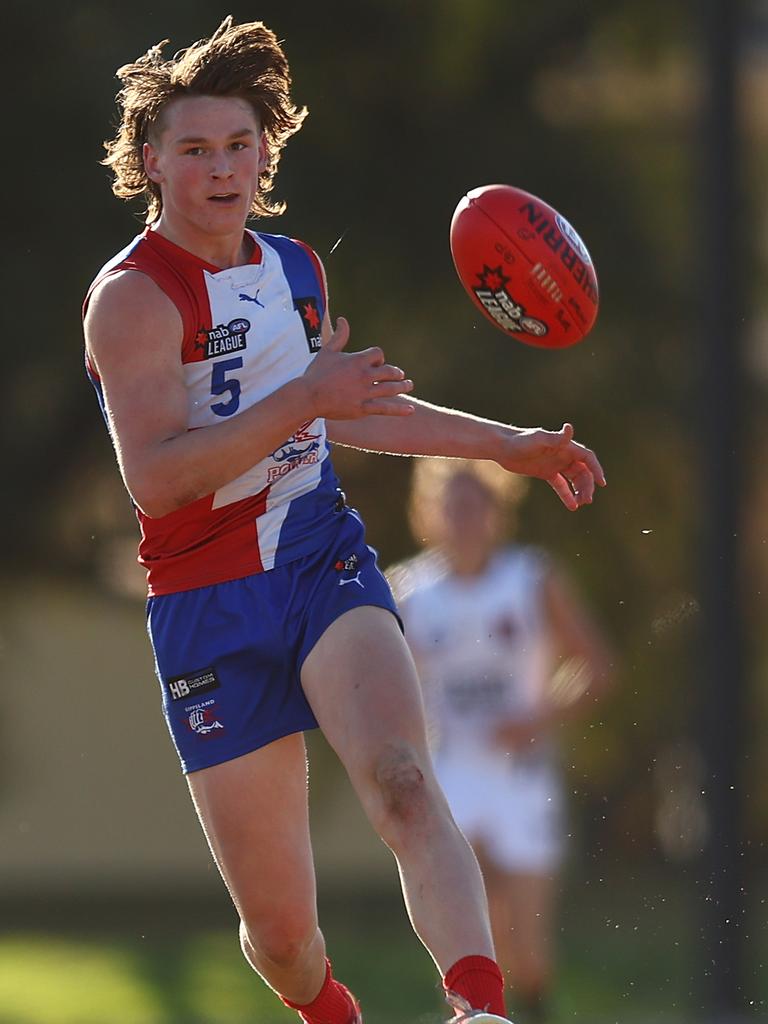 Potential No.1 pick Will Ashcroft – who officially nominated as a father-son for Brisbane last week – is one of four father-son prospects on the list, alongside Jaspa Fletcher (Brisbane), Alwyn Davey (Essendon) and Max Michalanney (Adelaide).

George, who is likened to Melbourne’s Christian Petracca, has been sidelined with a knee injury since May which has meant he has missed Vic Country’s three matches of the under-18 national championships so far.

Oakleigh Chargers key defender Max Gruzewski – who has not been part of the Vic Metro squad – is one of the surprise names on the invite list.

Victorians are expected to make up the majority of top-10 selections in this year’s draft, with Will Ashcroft, George Wardlaw, Elijah Tsatas, Aaron Cadman, Harry Sheezel and Jhye Clark all in the mix to be top-five picks.

Matthew Jefferson and Cameron Mackenzie are considered to be not far behind. North Adelaide midfielder Dowling has been a dominant force at SANFL under-18 level this season, leading the competition for disposals and ranking points – and on Saturday he took it to a whole new level.

The 187cm teenager tallied 44 disposals, 17 marks, 14 score involvements, 4.3 and 268 ranking points in the biggest individual performance of the season.

Dowling, a terrific leader, who co-captains his school side St Peter’s, also had some great moments for SA at the national carnival, alongside Sturt’s Nick Sadler who put his explosive traits on show.

North Melbourne currently holds the No.1 draft pick, with West Coast at No.2 and GWS at No.3.

The AFL has locked in dates for this year’s national draft, which will again be a two-night event held in the days after the AFLW Grand Final in late November.

The league has avoided a clash with Grand Final week of its women’s competition, which is set to hold its season decider on the weekend November 25 to 27.

The rookie and pre-season drafts will follow on Wednesday, November 30. TOP PROSPECTS: ALL THE NAMES YOU NEED TO KNOW

The drafts will come on the back of what is shaping as a busy free agency and trade period this year.

The free agency window opens on Friday, September 30 — six days after the AFL Grand Final — and closes on Friday, October 7.

Clubs then have a further three days to match bids, until Monday, October 10.

As it stands, West Coast and Gold Coast hold four picks inside the first 38 selections in this years draft.

A powerful midfielder-forward solidified his standing as a high AFL draft prospect with an impressive return from injury in the NAB League on the weekend.

Gippsland Power captain Bailey Humphrey logged 31 disposals and kicked four goals to lead his side to an 80-point thumping of the Northern Knights.

It was Humphrey’s first game since May, following a meniscus tear in his knee. 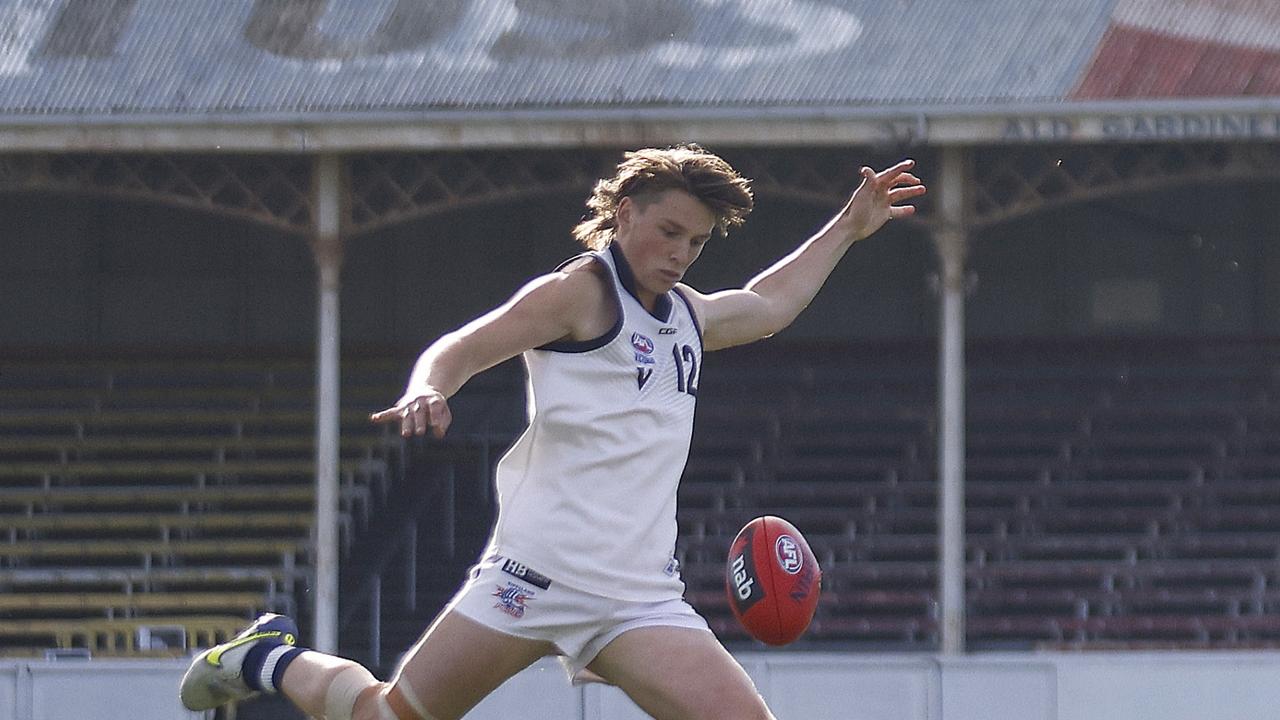 “Bailey’s a powerful midfielder-forward that everyone seems to be screaming out for,” Gippsland Power talent manager Scott McDougal said.

“He’s very, very quick. He’s strong in the marking contests when he’s a forward and leads our midfield when he’s in there. He goes head-to-head with the opposition’s best midfielder every time he plays and he doesn’t lose too many contests, which is a fantastic thing. He’s a real competitor.”

Humphrey – who measures 184cm tall – is expected to be added to the Vic Country squad ahead of their final game of the AFL under-18 national championships against Vic Metro in AFL Grand Final week.

Clark is firmly in the conversation to be a top-five draft pick this year after an eye-catching national championships campaign with Vic Country so far.

Only two rounds remain before finals in the NAB League.

NAB LEAGUE TOP 50 RANKINGS AFTER ROUND 14

Fresh off a bumper draft hand last year, Richmond is once again the envy of other clubs as it eyes three top-30 selections in this year’s national draft.

A further three high picks this year would help accelerate a regeneration on the run.

Pick 19 was passed on by North Melbourne as part of the Callum Coleman-Jones trade last year.

The Tigers’ selections are likely to be pushed back a couple of places, with an early bid expected on Brisbane father-son prospect Will Ashcroft, while North Melbourne is posturing for a priority pick. Will Ashcroft is a highly-rated father-son prospect for Brisbane this year. Picture: Getty Images

However, if Matthew Clarke and the Richmond recruiting team can nail their picks again this year, it could set the Tigers up for some more success in the not-too-distant future.

If North Melbourne does not receive a priority pick from the AFL, its next selection after pick one in this year’s draft would not be until pick 55.

The first round of the national draftDraft family royalty: Does your club have a father-son coming?Draft intel: Why Crows could miss out on Ryder-like gun

Gold Coast and West Coast sit alongside Richmond as the clubs with the strongest draft hands this year.