AFL Draft 2022: The prospects to watch from Queensland

Ahead of today’s NAB League stream involving Brisbane and Gold Coast, check out the best young talents and see how they perform.

A Brisbane Lions father-son prospect and the nephew of the all-time leading goalkicker Tony ‘Plugger’ Lockett are among the top draft prospects to watch out for from the Queensland academy sides.

The state has been arguably the hardest hit state for draft prospects since the pandemic, with limited opportunities to play representative football.

It means more 19-year-old talents are returning to the northern academies after being overlooked in last year’s draft.

News Corp will be streaming a match each of the Brisbane Lions and Gold Coast Suns Academy sides across the next three weeks as the two teams battle it out against Victoria’s best in the NAB League.

Prospects tied to the Lions and Suns can be drafted at a discount through Academy draft rules.

So, who are the prospects on the radar of AFL clubs, and who could have their name called on draft night at year’s end?

We outline the players to keep tabs on throughout 2022. NOTE:Queensland No. 1 pick fancy Will Ashcroft, a potential father-son prospect with the Lions, is playing with the Sandringham Dragons in the NAB League.

Fletcher is the standout prospect from the Queensland academy sides this year and he is eligible to join Brisbane as a father-son. His father, Adrian, played for five clubs across his 231-game career but only broke the 100-game barrier with Brisbane. The midfielder started the NAB League season in style with 19 disposals at 90 per cent efficiency, seven inside 50s and two goals from long-range on the run. One of those epitomised his x-factor, selling candy to the man on the mark, dashing past his opponent and putting it through the big sticks. Fletcher has a penetrating right boot and rarely wastes a disposal, making great decisions by hand and foot. He spent time training with the Lions during the pre-season with fellow father-son prospect and No..1 pick contender Will Ashcroft.

Foggo uses his lethal left boot at every opportunity out of defence and through the midfield, with his kicking proving to be a weapon in a stellar display against the Geelong Falcons in round 1. Foggo tallied 19 disposals (17 of those kicks) at 82.4 per cent efficiency, 157 KFC SuperCoach points, laid 11 tackles and slotted a goal from 45m on the run in a well-rounded performance from the over-ager. The 189cm prospect is competitive at the coalface and has been entrusted with the kick-ins, a nod to his penetration by foot.

It is hard to get stronger bloodlines than the all-time leading VFL/AFL goalkicker, with Lockett the nephew of Sydney and St Kilda legend Tony. The 189cm prospect returns to the Suns as an 19-year-old after spending his draft year of 2021 with the Greater Western Victoria Rebels, where he kicked seven goals and averaged 12.1 disposals, four marks (1.1 contested) and 71 ranking points across 10 NAB League games. Lockett was used as a tall midfielder and in defence in the Suns’ season opener against the Cats, impressing with his inside ball-winning, finishing with 16 touches and nine contested possessions. He showed shades of his uncle in an under-15 game, where he booted a whopping 15 goals. Jye Lockett after he kicked 15 goals as a youngster. Picture Mike Batterham

A contested marking forward who can be used in the ruck, Bella is another player who should receive greater opportunity in his 19th year after playing just three under-18 games in 2021. Bella has exceptional spring, recording the second best standing vertical jump (75cm) in the country at last year’s draft combine. And he showcased his on-field potential at VFL level with a three goal haul against Sydney’s reserves last season. The Palm Beach product is an accurate set shot and has good skills by foot.

Harrington brings spark to the front half with his speed and sidestep in traffic, having an uncanny knack of evading defenders. The 180cm forward doesn’t need a heap of possessions to make an impact on a contest, and his first match of 2022 was an ‘almost’ game, with several missed chances on goal after eye-catching build-up. Harrington won a premiership with Broadbeach in the QAFL last season where he proved he can match it with senior bodies, kicking seven goals in 10 games. 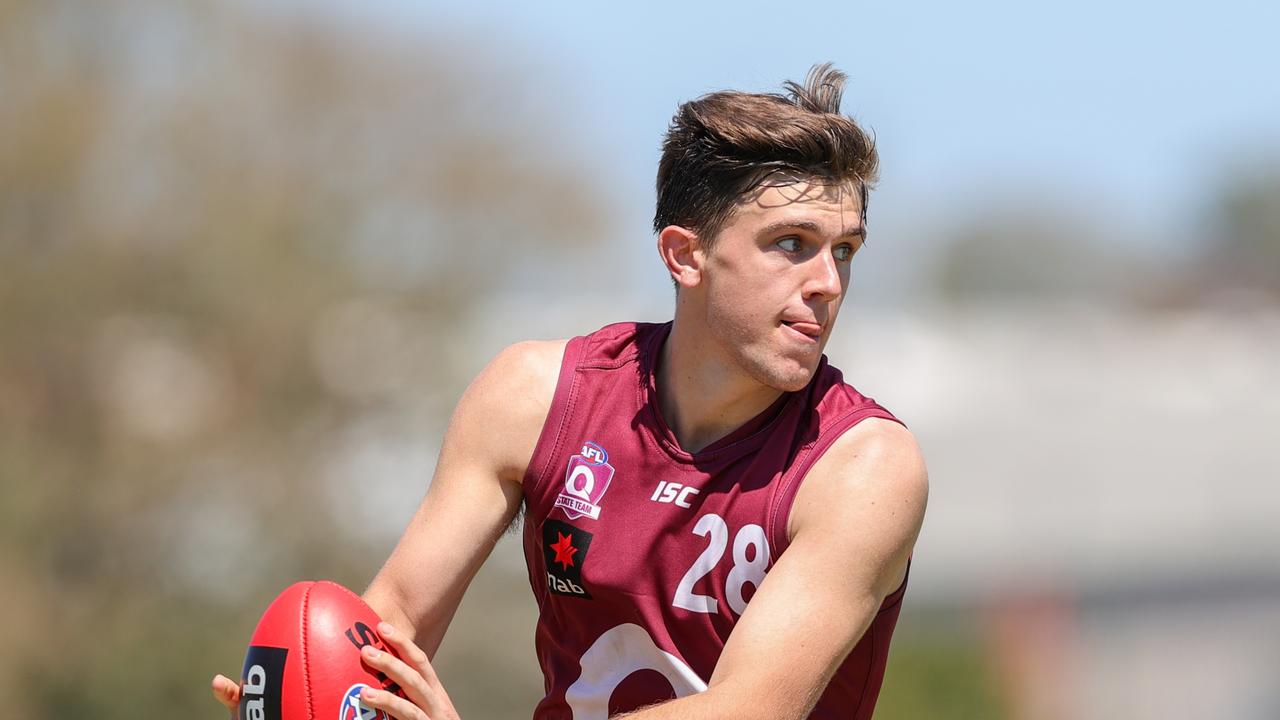 Liam Hude gets the footy in a AFL U17 Championship match between Queensland and Tasmania. Picture: Russell Freeman/AFL Photos

A strong marking presence who plays taller than his size suggests, Hude can be used at both ends or through the midfield. Hude made an eye-catching start to his draft year against the Western Jets as a forward, booting three goals and clunking six marks in undesirable conditions for a making forward. The Lions Academy prospect, who has improved his fitness over a promising off-season, has great hands overhead and is a clean ball-user.

Corbett has a touch of class with ball in hand, possessing sharp kicking on both sides of his body. Hailing from Surfers Paradise, Corbett can win the footy on the inside and the outside as a midfielder and take a grab when pushing forward. The rangy midfielder had a solid start to a solid start to the year with 15 touches against the Geelong Falcons.

Ford is raw, given he has played less than two years of football, but the 204cm prospect has exciting upside. The Townsville product tried his hand at Aussie rules for a day off school in 2019 AFL Townsville gala day – and he made such an impression that he has moved south to the Gold Coast to play with the Suns Academy and Broadbeach. Ford’s aggression and work rate is what stands out for a player his size and his potential improvement is an added bonus for clubs looking for a project ruckman. Manly is an inside midfielder who can push forward and hit the scoreboard. The Wilston Grange product showcased his nous around goal with a crafty snap in the Lions’ round 1 clash against the Western Jets, also winning 16 disposals. Manly gets his hands dirty at the coalface with his contested ball-winning and tackling, with his skills making him a well-rounded midfield prospect.

Little is a well-rounded defender who rises to the occasion, often playing his best games against his most difficult opponents. At 195cm, Little can play on forwards of all sizes and has the capacity to zone off and intercept or play as a 1-on-1 lockdown defender. The lightly framed backman is also a trusted ball-user out of defence. Little illustrated his defensive pressure at ground level in the Suns’ round 1 encounter, laying six tackles.

Originally published as AFL Draft 2022: The prospects to watch from Queensland