AFL form ladder, 2022: Which teams are hot in the league right now and which teams’ form has slipped

Which teams reach up to take on the best and which like to beat up on the strugglers? To find out which do both, check out our form ladder analysis.

Former Collingwood coach Mick Malthouse rates the Magpies as a “certainty” to make the top eight and says they can be a dangerous side from there after they emerged as one of the AFL’s biggest movers, according to Champion Data’s form ladder.

As the final eight is starting to take shape as the AFL nears the pointy end of the home-and-away season, the ladder based on form over the past five matches has shaken up the premiership standings.

The Magpies are on the march, Geelong – who Malthouse considers to be the pick of the top-eight prospects – is primed for a September assault and Melbourne’s premiership defence has slipped based on the AFL’s form ladder.

A Champion Data analysis based on results from Rounds 12 to 17 puts Geelong and the Magpies at the top of the form ladder as the only unbeaten teams, while Fremantle is just behind with the one loss. The Pies are on the surge. Picture: Getty Images

Collingwood is up four positions on the form ladder from the premiership standings – where they sit in sixth place – but only one of their five wins has come against top-eight opposition during that period.

The Magpies face Adelaide, Essendon, Port Adelaide, Melbourne, Sydney and Carlton in the run home and Malthouse was confident they could lock a finals berth – and potentially challenge for the top four.

Malthouse said the Magpies were clearly responding to coach Craig McRae, who knew what it took to deliver in finals as a triple premiership player.

“I think they are a certainty for the eight,” Malthouse said.

“Collingwood have got a chance of making top four, but the bye has really taken some percentage advantage from the top four.

“They will get a couple of blokes back, what they do with (Brodie) Grundy and (Jordan) De Goey … (Darcy) Moore will come back. They will actually get better. Champion Data's form ladder shows the teams that are flying – and those that are struggling.

“Clearly Craig McRae has done a wonderful job, but he is very calm and collected and the players are responding to that.

“It’s how they handle the next six weeks mentally and with Craig McRae who has been there and done it, so he knows what premierships are about and how they can be won.

“You have got to know how to win to be a winner, I reckon in many respects. He knows how to be a winner and that is clearly rubbing off. I think they have got an excellent chance.”

Geelong tops both the premiership and form ladder on the back of a seven-game winning streak, having won more quarters of football (14) than any other team between rounds 12 and 17. The Cats are underlining their premiership credentials with a rich vein of form. Picture: Getty Images

Malthouse said the Cats were the pick of the premiership challengers, but said they could be beaten and the race was an “open book” from there.

“I have shifted to Geelong, I think they have got all the things that you need but I don’t think that they are a dominant side,” the three-time premiership coach said.

“I think Geelong have got the ammunition, but from there on in, I really don’t see a dominant side.”

The Gold Coast Suns have been the other big mover, up six spots from their position on the premiership ladder following three wins from their past five matches.

But it was a different story for premier Melbourne and top-four challenger Brisbane.

From second on the premiership ladder, the Demons have fallen to 10th on the form ladder.

Melbourne has lost three of its past five matches, but the Demons are one of only two teams – alongside St Kilda – to have faced four top-eight teams in the past five games. 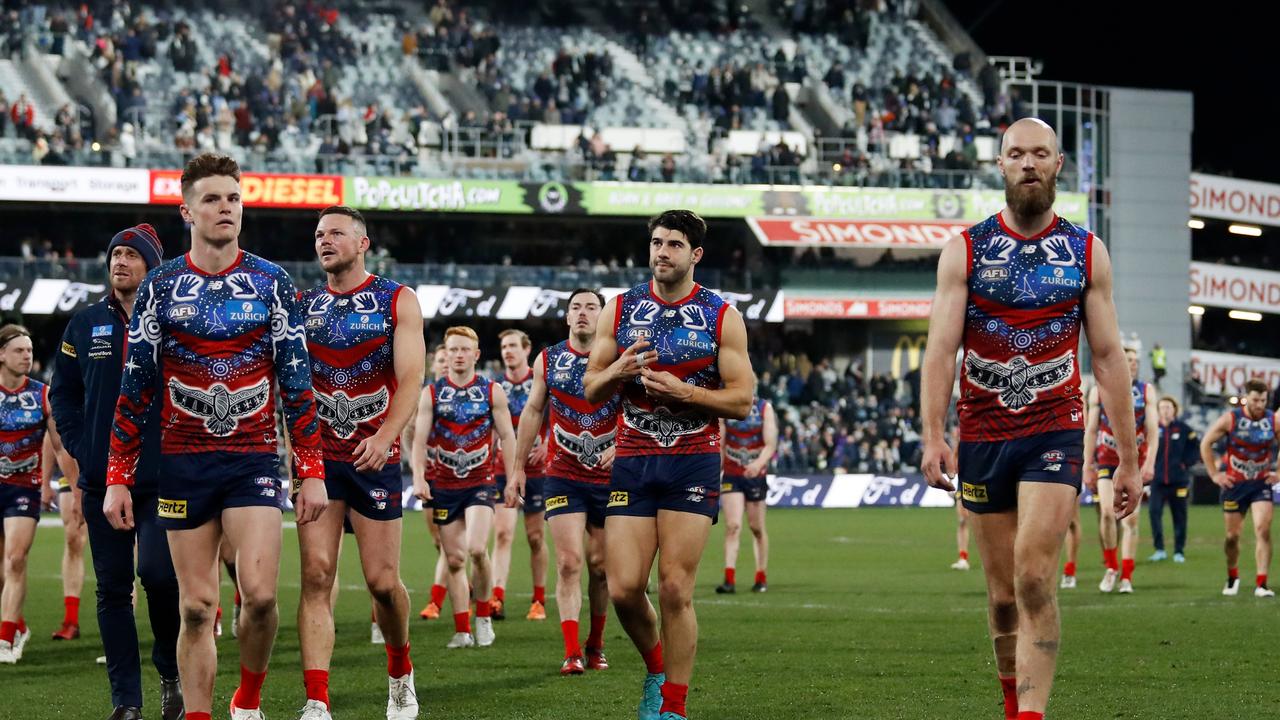 The Dees are searching for the form that made them the 2021 premiers. Picture: AFL Photos/Getty Images

The Lions are down from fourth on the premiership ladder to 13th on the form ladder after three losses from their past five outings.

Brisbane has a 0-2 record against top eight sides and 2-1 against bottom 10 in that time.

“I don’t have any faith in Brisbane … Brisbane don’t play finals football at any stage, Melbourne do,” Malthouse said.

“They’ve lost hunger, I’m not saying it can’t be regathered but they have certainly lost hunger.”

Port Adelaide pushed into the top eight on the form ladder – from 12th in the premiership standings – after three wins from its past five, while Richmond retained the same position.

Carlton (from 5th to 4th) and Sydney (from 7th to 6th) have also moved up a position on the form ladder from their premiership standings.

“Carlton could pop up like Collingwood. Carlton and Collingwood are in the same category, different types of teams but could pop up because they have both got coaches who are winners and coaches that understand how to win, former teammates,” Malthouse said.

“They are the ones that could come from anywhere because they have got no finals form over the last couple of years so you don’t know what they are going to give you.”

Sitting just outside the top eight on the premiership table, St Kilda has been another major slider on the form ladder, falling to 17th.
The Saints have lost four of their past five matches, but like Melbourne, have faced a more challenging fixture with four games against top eight opposition for a 1-3 record.

The Cats and ninth-placed Essendon have the best record against top-eight sides over the past five rounds, both with two wins against top eight teams.

The Bombers are up from 16th on the premiership ladder to just outside the top eight based on most recent form after three wins from their past five matches.

Originally published as AFL form ladder, 2022: Which teams are hot in the league right now and which teams’ form has slipped