Crows coach Matthew Nicks did not pull any punches after a 43-point loss to Gold Coast. And it is the same issues plaguing his side.

Bitterly disappointed Adelaide senior coach Matthew Nicks said the Crows were “hard to watch’’ in the 43-point loss to the Gold Coast at Metricon Stadium on Sunday.

Nicks said poor execution at both ends of the ground from the Crows handed the Suns victory as Adelaide squandered a host of gettable shots at a goal for a costly return of 10.13.

Nicks did not pull his punches post-match after the Crows closed to within 13 points of the Suns with seven minutes left on the clock only to see the Suns scorch away from the visitors with Adelaide now falling to a 4-9 record. “Unfortunately, today it was at both ends. We had some horrific turnovers in our back half, we found ways not to score when it was a lay-up so it’s hard to watch.

“I feel for our members and supporters. It’s a tough one at the moment. When you don’t execute, it’s hard to watch. We were in the fight and felt the momentum was with us.

“10.13 isn’t even the whole story. We find ways not to score. It’s been our issue. We are really disappointed with today’s game…we lost that game of footy, we handed that game of footy to the opposition. They kicked 13.7 from intercepts.

“You don’t win games of footy doing that.’’

Heading into Sunday’s clash with North Melbourne in Hobart, Nicks said there still positives to build on.

“We feel like we are well ahead of where we were last year but the execution issue is now becoming a major one, just that inability to convert,’’ he said.

“But the positives out of it, Sam Berry took another step this week. (Jake) Soligo has been impressive with his balance and his awareness on field.

“We were in the game. The score line doesn’t actually represent the game.’’

Nicks said the Crows were prepared to go for the win late and lose by multiple goals rather than be conservative and lose by a few goals “and not have a crack at it”.

“We took a number of chances and the opposition got out the back on us,’’ he said.

Nicks said the ankle injury to ruckman Riley Thilthorpe was not over serious and he just rolled the ankle in a marking contest.

He said Josh Rachele showed some glimpses in his return to senior footy but he would be better for the run.

The Gold Coast Suns remain in the congested race for the top eight after a hard-fought 43-point win over an inaccurate Adelaide at Metricon Stadium on Sunday.

But it will come at a cost for the Suns with defenders Will Powell (dislocated ankle) and Connor Budarick (hamstring) going out of the game in the third term and forward Joel Jeffrey (leg) leaving the field in the fourth quarter.

The Suns moved to a 7-6 record with their third-straight victory and their fifth win in their last six starts, while the Crows will rue their wayward return of 10.13 with a host of gettable goals going to waste.

Adelaide also lost ruckman Riley Thilthorpe in the third term with an ankle injury. The Crows slumped to a 4-9 record but the final margin did not reflect how tight the contest was for most of the afternoon. 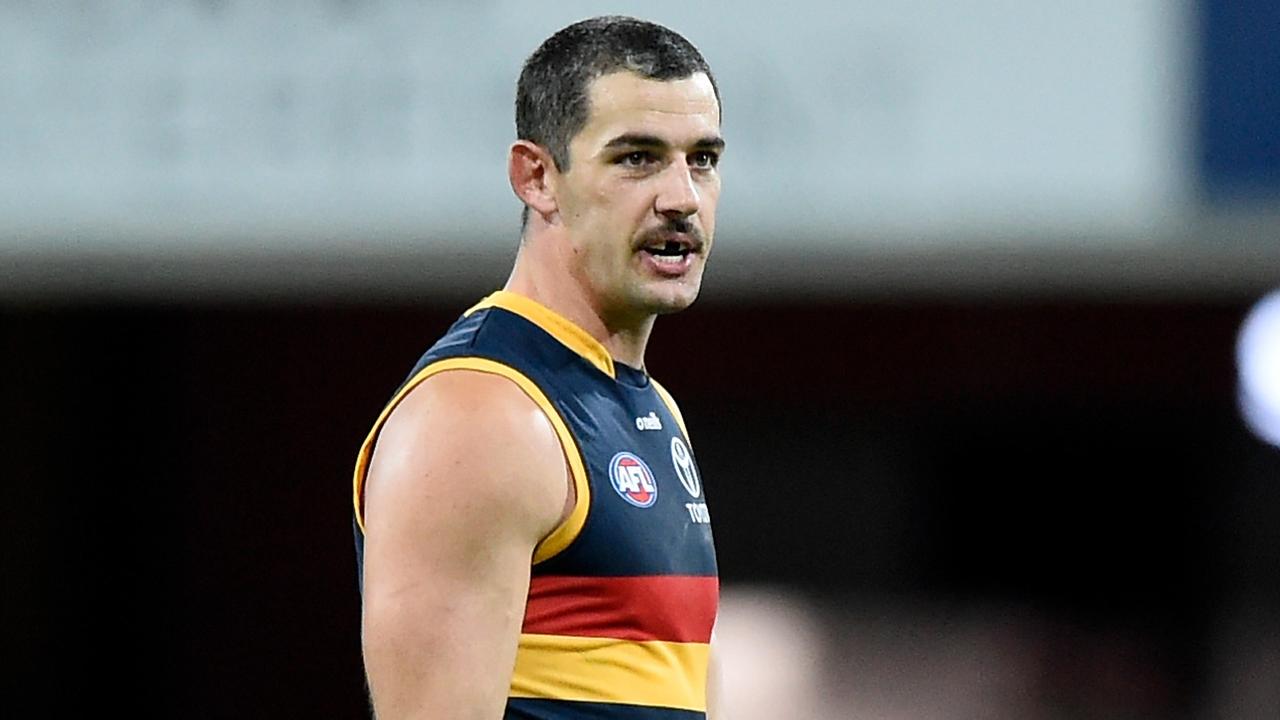 Deep into the final term, the Crows were just three goals adrift of the Suns but the Gold Coast kicked away late.

With their interchange bench reduced to three men, the Suns started to fatigue late with a number of skill errors and poor decisions creeping into the game which allowed the Crows to storm home.

However, a towering Levi Casboult set shot late in the fourth quarter gave the Suns some invaluable breathing room. His third goal for the game put the icing on the cake.

Broadcasters did not replay the incident involving Powell as it was deemed too graphic. Powell was in obvious pain as he writhed around on the Metricon Stadium surface and he was using the pain-killing green whistle as he was transported off the ground. 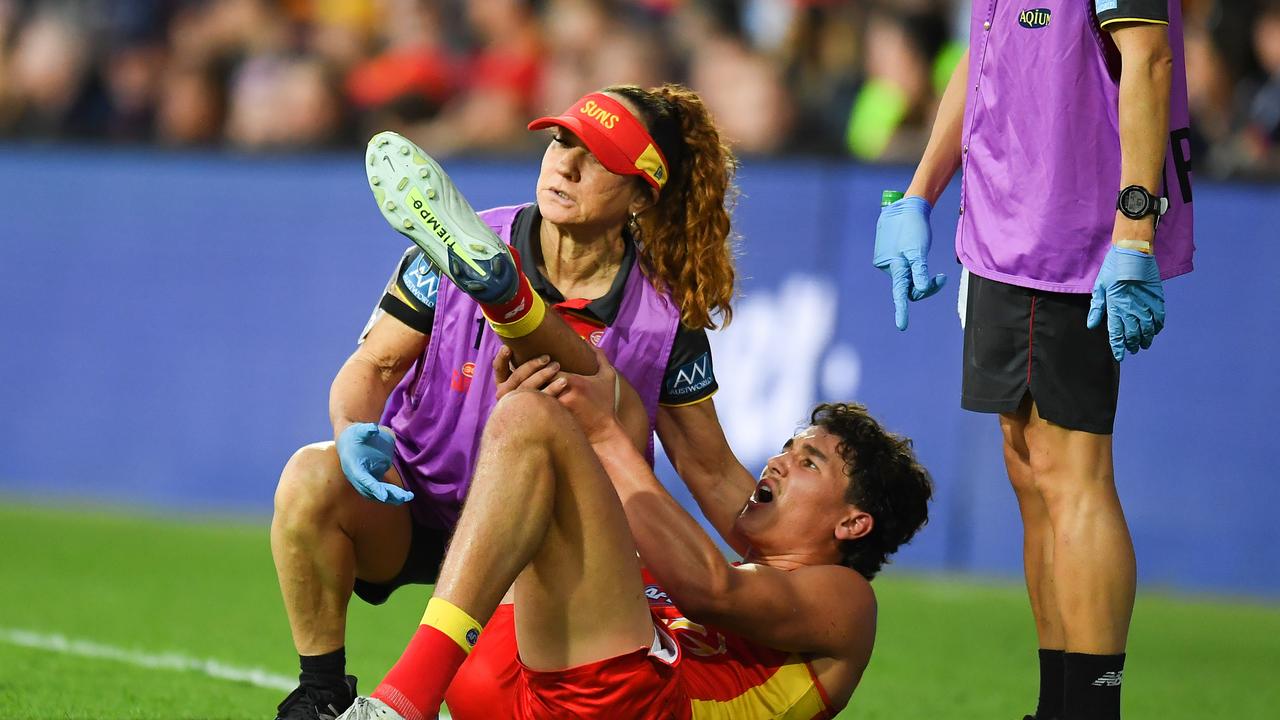 Powell was taken off on the stretcher and had the green whistle. Picture: Matt Roberts/AFL Photos/Getty Images

The Gold Coast led by 36 points before the injury spate after a brace of goals to Nick Holman.

But after the significant delay to the game to allow the medi-cab to remove Powell from the ground, the Crows seized the momentum and reduced the margin to 20 points at the last change through goals to Taylor Walker and Lachlan Murphy.

The Suns scorched past the Crows in the second term, booting six goals to one in the quarter to take a 23-point buffer into the main break.

Mabior Chol kicked two goals in the opening minutes of the quarter and his key forward partner Casboult got in on the act soon after following a strong pack mark.

Adelaide’s only resistance came through a Thilthorpe major before Jeffrey pounced on a poor Adelaide turnover in their defensive 50 and Izak Rankine then stamped his authority on the contest with two late goals to hand the Suns a handy halftime buffer.

Adelaide led by a goal at quarter-time after a particularly ugly term of football when both teams struggled to hit a target in their forward 50.

The Suns have lost Wil Powell and Connor Budarick to injury, Jack Bowes has been subbed into the game.#AFLSunsCrowspic.twitter.com/9J1XzGYfLp

*The Gold Coast Suns played their 250th AFL premiership match on Sunday and claimed just their second-ever win over the Crows in 16 meetings. It must be something about South Australian teams, the Gold Coast has just one win against Port Adelaide – their first-ever victory in 2011. Overall, the Suns have a 66-2-182 record. Their best record is 8-8 with North Melbourne followed by 7-9 against Carlton.

Fresh off the bye with a last-start win against West Coast, the Crows were up for the contest early. Adelaide led at quarter-time after the doing the tough stuff. They had 31 more disposals than the Suns, three more clearances, five more tackles and two more contested possessions than the home side. However, the Crows’ accuracy in front of goal did not help their cause. Taylor Walker – who had kicked 42 goals in his previous 12 games against the Gold Coast – missed his first three shots on goal and it got very contagious.

Will Hamill slices through a few Suns and boots his first AFL goal ðŸ™Œ#AFLSunsCrowspic.twitter.com/QK5yQ9bcmW

The Gold Coast’s defensive stocks are taking a battering. With Lachie Weller already ruled out for the season with an ACL injury, the Suns lost two defenders in the space of a few minutes with Will Powell (ankle) and Connor Budarick (hamstring) ruled out of the game. The game stopped for several minutes as the medi-cab was required to take Powell from the ground.

*Izak Rankine showed why criticism off him being a selfish player was wide of the mark. He booted two goals in the second term to add to his team-first touches in the first term. A beautiful sweeping handball thrust the Suns into attack, he won a free kick with a crunching tackle and centred the ball with a pinpoint accurate kick to a teammate when it would have been easy to blaze away. He finished with three goals after an industrious day.

‘We only wish he was here’: SA great now a legendCrows make call on unvaxxed player’s futureCrows back brand despite worse record than 2021