AFL Round 10 North Melbourne v Narrm Demons: All the news, action and fallout

The Demons have achieved a six-decade first after defeating a spirited North Melbourne — and a star blew up the stats sheet.

Another week, another Melbourne win – but the rebuilding Kangaroos made things interesting for almost three quarters.

The reigning premier Demons did it the ugly way for most of Saturday evening at Marvel Stadium before piling on the last six goals to run out comfortable 47-point winners.

That run started after North Melbourne slashed the deficit to only six points midway through the third term courtesy of big man Tristan Xerri’s close-range snap.

Melbourne is 10-0 to start a season for the first time since 1956, the year the club won the eighth of its 13 VFL/AFL flags. Simon Goodwin’s men also moved into equal eighth-place with a 17th-straight triumph overall and are within six victories of Geelong’s all-time record of 23 between 1952 and 1953.

That streak will be under threat at the MCG in the same timeslot next week, when the high-flying Dockers roll into town.

The Demons will hope to be closer to their best than they were against the second-from-bottom Kangaroos, who caused some unexpected headaches before fading late.

Most of the numbers suggested the difference should have been greater, with Melbourne having 40 more inside 50s, 18 extra clearances and dominating contested possession 140-119.

But North was vastly improved on what it dished up in the past fortnight against Fremantle and Port Adelaide.

Clayton Oliver was clearly the best player afield, amassing a career-high 45 disposals, 13 clearances and 13 inside 50s as Melbourne’s firestarter in the middle. 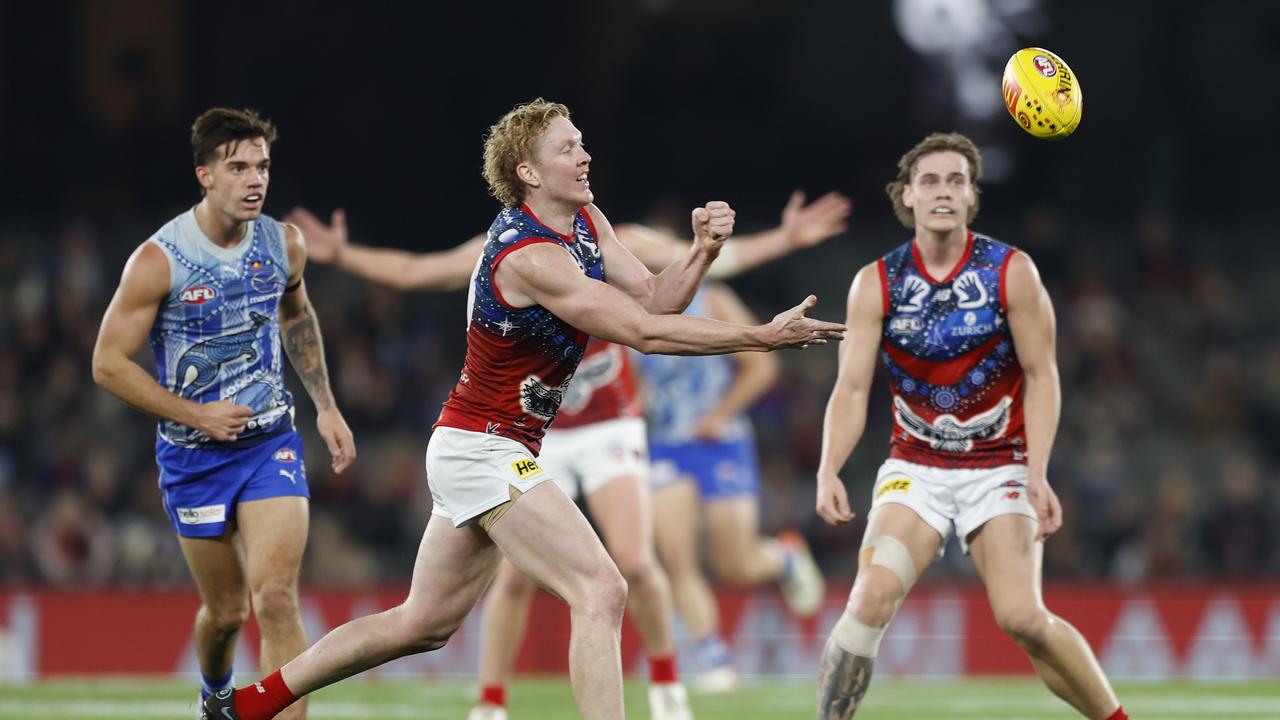 His trademark ability to win the ball in close made him a constant nuisance for the Roos’ midfielders, although Luke Davies-Uniacke battled until the end.

Christian Petracca improved the longer the match went and his precision field kicking was a class above, while Bayley Fritsch and Tom McDonald and the exciting Kozzy Pickett all kicked multiple goals.

Melbourne played most of the contest without star winger Ed Langdon, who was injured in a bruising Tarryn Thomas tackle.

Langdon received a free kick and produced a magnificent around-the-body finish for the Demons’ opening goal but left the field for good soon after with sore ribs.

The 26-year-old, who was replaced by Toby Bedford, averaged 25 disposals in the first nine rounds, along with 434m gained, five intercept possessions and five score involvements.

Melbourne had a few early injury scares, with Harry Petty (ankle) and Tom McDonald (knee) returning to the ground after hobbling off.

But McDonald ended up sitting out the final stages.

Cost the Kangaroos the opening goal.

North Melbourne coach David Noble was infuriated several times on the sidelines as the ladder-leading Demons benefited from a series of crucial first-half free kicks.

In fact, almost half of Melbourne’s 17 scoring shots to half-time were from free kicks or 50m penalties, one of which was an umpire dissent call against Luke Davies-Uniacke.

Aidan Corr avoided the same fate early in the second term despite clearly disagreeing with a free kick he conceded to Tom McDonald near goal.Those costly scores curbed an otherwise gallant start from the Roos.

Langdon received a free kick out of the incident and snapped a goal, one of Melbourne’s eight first-half scoring shots from a free kick or 50m penalty on its way to a 47-point victory at Marvel Stadium.

The Demons subbed Langdon out of the match soon after and he went for scans, with coach Simon Goodwin admitting there was at least some fear he may have sustained broken ribs.

“It’s one of those ones that’s difficult to balance, isn’t it? I’m not sure of the interpretation,” Noble said.

“It was front on, and I get the dangerous essence of tackles. But, from my side of things, I probably thought it was an OK tackle. I was pretty happy with it.

Tarryn Thomas getting pinged for a free kick against because he delivered a perfect, crunching tackle while a bloke was in the air (in one motion) is why I don't watch this once great sport anymore. 7 minutes in and I've seen enough. #AFLNorthDees

“We had one with Jed Anderson last week as well. I just think we have to be careful – there’s a balance on both sides. But I’ll probably make a phone call on that one and a few others this week.”

Noble was visibly irate on the boundary line after several of the free kicks in the first two quarters but said the umpires had “a bloody difficult job”.

Demoted duo Jaidyn Stephenson and Callum Coleman-Jones, the Roos’ key recruits in the past two years, weren’t able to push their cases in the VFL because of a bye and face an uphill battle to return next week.

“I think the effort, the intensity and the physicality that we brought today is an indication of what those two have to do in order to get back into the team, as a starting point,” Noble said.

Top side Melbourne’s latest win improved its season record to 10-0 and was its 17th victory overall dating to last season, feats that Goodwin was “incredibly proud of”.

“But we’re certainly heading in the right direction and our supporters should really embrace what these boys are doing for them, because it’s pretty special.” 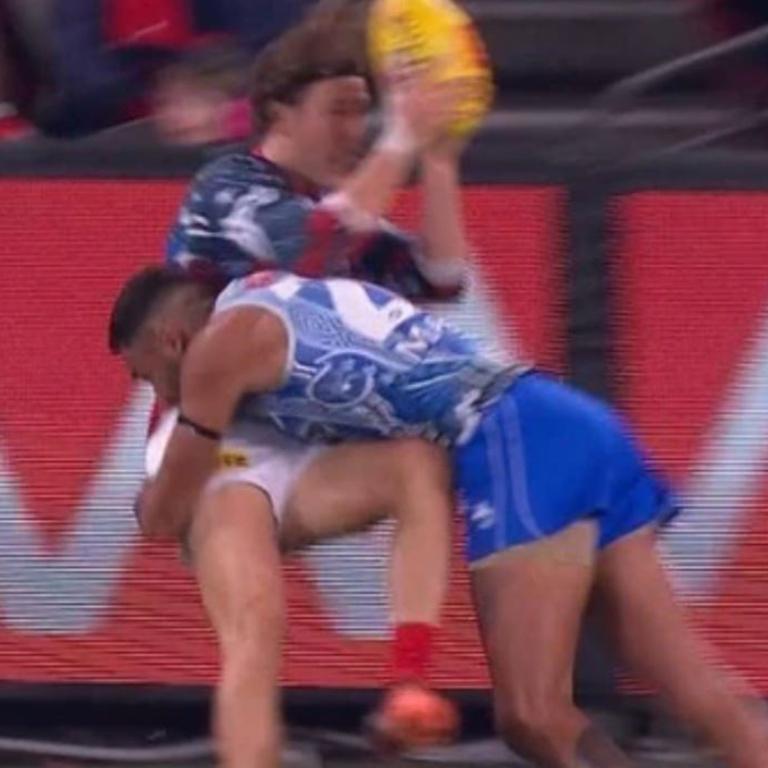 Goodwin, a former star midfielder himself, also lavished praise on brilliant on-baller Clayton Oliver, who won a career-best 45 disposals, 13 clearances and 13 inside 50s in a best-on-ground performance.

“He’s been amazing and continues to do things that excel his game to new levels, and today he was outstanding,” he said.

“His stuff around the footy was the best I’ve seen for a long, long time and he’s a really important player to us. Without (Jack) Viney and (James) Harmes in the team, he really stepped up in that space.

The Tackle: Have North fans jumped off sinking ship?Malthouse: Only two clubs make sense for Clarko‘Got to be careful’: Did Bevo have issue with star’s treatment?

“A lot of the time, you’ll watch the game and think, ‘I didn’t realise he had 40 possessions’, then you watch the tape and there’s some pretty special stuff amongst it, of how he releases the ball, how he moves the ball into space and traffic and brings others into the game.

“It is a unique skill and he’s very, very good at it ... he’s evolved his game but he’s been doing this now for six years and it’s a pretty unique player we have.”

Originally published as AFL Round 10 North Melbourne v Narrm Demons: All the news, action and fallout