Carlton’s backline woes have continued with Sam Durdin ruled out this week. Who will step in? See every club’s predicted 22 for this week.

Some big names are about to return and others are racing the clock to prove their fitness for Round 15.

Jack Gunston, Dayne Zorko and Darcy Parish are among those hoping to show they’re 100 per cent on the track this week, while Carlton has to find a replacement for another injured defender.

Our experts analyse where every club is at and their likely team for this weekend.

Second-year forward Riley Thilthorpe may be a forced change.

He injured his ankle in Sunday’s away loss to Gold Coast, paving the way for newly re-signed Lachlan Gollant to replace him after he kicked three goals in the SANFL.

Harry Schoenberg (27 disposals, four clearances, five inside 50s) starred in the Crows’ reserves win and could be rewarded for his SANFL form.

He has been solid this season but quieter the past two weeks.

Otherwise the Crows could reshuffle their line-up and go smaller in defence for Sunday’s game against the Kangaroos. The bye has given Dayne Zorko hope of featuring this round.

The Lions had the bye on the weekend giving skipper Dayne Zorko extended time to prove his fitness for the highly anticipated top of the table clash against Brisbane on Thursday at the MCG. Darcy Gardiner is out for an extended period of time with key position player Jack Payne a possible inclusion. Brodie Kemp looms as the next Blue in line to plug a hole in defence.

Carlton’s backline woes continue with Sam Durdin out, but he is likely to be replaced by Brodie Kemp. Jack Martin remains in some doubt and could miss, which would pave the way for Josh Honey to return to the team. Jack Carroll (29 VFL disposals), Paddy Dow (27), Will Hayes (26) and Liam Stocker (26) are all knocking on the senior door.

There are two big ifs about this team to take on Greater Western Sydney, which will play out. The first centres on Jordan De Goey, who has been at the centre of a storm of his own making. The club is looking into his behaviour on a mid-season trip to Bali so his position within the team here is not guaranteed until they reach a conclusion. If De Goey doesn’t play, Tyler Brown is likely to play. Then, there is Steele Sidebottom, who has been carrying an injury, but will hopefully prove his fitness to take on the Giants. It is hard to see the Magpies making any other change.

No need for any mass changes which hasn’t been the case too often this season for Ben Rutten. Ball magnet Parish missed last week with a calf strain but is expected to come back in for McGrath who pinged his groin against the Saints.

The Dockers had big names Nat Fyfe and Michael Walters return from injury before the bye, and Taberner looks to have overcome his back spasms after kicking 3.2 in the WAFL last week. Acres was subbed out with a low-grade hamstring injury in round 13, while Heath Chapman could come into consideration if he has recovered from his own hamstring setback. Frederick shapes as a logical resplacement for the injured Switkowski after serving his club-imposed suspension for drinking alcohol on a six-day break. Patrick Dangerfield is poised to play his first game since Round 10.

Things are tightening up at selection for the Cats as they clear out the injury list. Patrick Dangerfield will make his long-awaited return from a mini pre-season in a blockbuster against Richmond. Youngster Max Holmes’ was the Cats’ best in the VFL on his return from ankle surgery and will come into the AFL side, while Jack Henry also made a successful return. After clearing Covid protocols, Gary Rohan should be available and so too will Shaun Higgins and Esava Ratugolea. But there aren’t many spots available. Jake Kolodjahsnij might be the unlucky one squeezed out of defence, while Cooper Stephens has been solid in a run at the top level but Dangerfield probably takes his inside-midfield minutes. Tough week for match committee.

Jack Bowes is a certain starter in the Suns 22 after impressing as the sub against the Crows. The Suns lost important duo Wil Powell and Connor Budarick to serious injuries but do have the depth to cover.

It could be time for young key forward Wade Derksen to be unleashed after a string of impressive games in the reserves. The Giants injury list is mounting with Jacob Hopper expected to be a week away while timelines on Brent Daniels and Matt de Boer are still uncertain.

Daniel Lloyd is also available but it’s uncertain if he will come straight back into the senior side. Kieran Briggs missed last week’s VFL game to due to illness but might be required to jump straight up to the AFL side with injuries to Matt Flynn and suspension to Braydon Preuss. Jack Gunston should return for Hawthorn in Round 15.

Hawthorn’s forward stocks are set to be bolstered by the return of Mitch Lewis and Jack Gunston, while Jarman Impey should also return after being managed against the Dockers. James Blanck could come into the frame to make his debut with Sam Frost out for a month with a knee injury. The availability of Max Lynch and Josh Ward (concussion) remains unclear.

The Demons were dealt a significant injury blow when captain Max Gawn was ruled out for up to five weeks with a syndesmosis injury. Weideman could come into the frame to provide another forward option and, potentially, ruck support. After serving his one-match club-imposed sanction – following his time out under concussion protocols – for his altercation with teammate Jake Melksham, Steven May will return for the clash against the Lions. 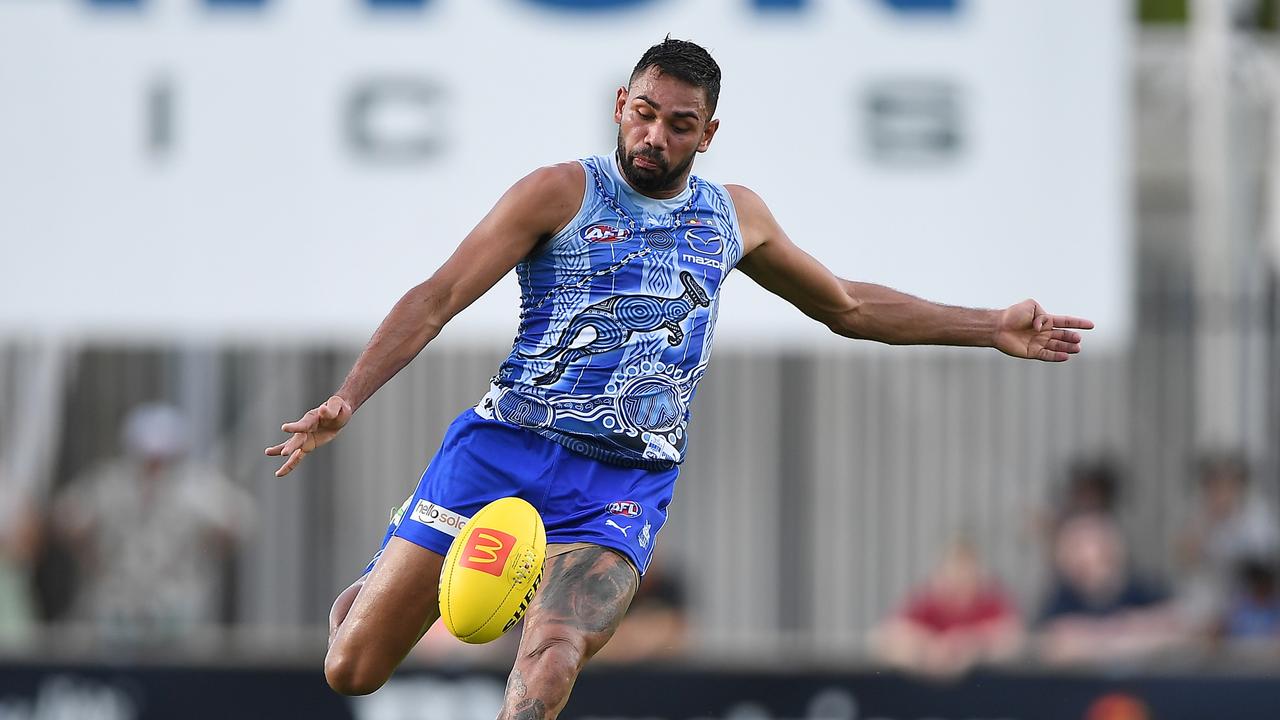 Tarryn Thomas is likely to win a re-call for North Melbourne.

Two major outs for the Kangaroos with No. 1 draft pick Jason Horne-Francis to miss two matches through suspension and captain Jack Ziebell sidelined for a month with a facial fracture. Forward Cam Zurhaar could spearhead the inclusions for the Roos, along with key defender Ben McKay, who has completed the 12-day concussion protocols.

Travis Boak’s return from Covid helps ease the loss of Butters a little.

A bigger question is what ruck set up will the Power use against Gold Coast’s All-Australian contender Jarrod Witts?

As adept as Jeremy Finlayson has been in the role, it will be a surprise if he is tasked with battling Witts without support from a recognised ruckman.

That means Sam Hayes may be in line for a return after spending the past two games in the SANFL.

Xavier Duursma’s influence as the medical substitute in Saturday’s win over Saturday was substantial and he should come back into the side for Martin Frederick.

Martin will make a welcomed return for the Tigers blockbuster clash against the Cats after missing with illness, and will replace former skipper Cotchin, who has been sidelined with a broken collarbone. Balta (hamstring) was playing up forward and lending a hand in the ruck in the Tigers’ the win over Carlton which could give Soldo a look-in, after he kicked two goals and won 27 hit-outs in the VFL. Three-game key defender Ben Miller is set to be on standby for Robbie Tarrant, who is in doubt after undergoing minor surgery on a broken knuckle he sustained against the Blues. Mosquito fleet Jake Aarts (four goals in the VFL), Noah Cumberland (three goals, six tackles), Jason Castagna and Maurice Rioli, who provided late spark as the sub, could all be considered for a recall.

Ratten confirmed Steele would return for the club’s important clash against Sydney, with the captain even pushing for a world record return last week from his AC joint injury. Butler might find himself out of the St Kilda line-up again, while Dan McKenzie has been a regular this season and should return if he has recovered from his concussion. Mitch Owens (concussion) will also be in the frame with his tackling pressure after the Saints’ season-low tackle count against Essendon. As will Marcus Windhager, last week’s unused sub, who responded to his demotion in fine fashion with 31 disposals and two goals in the VFL. 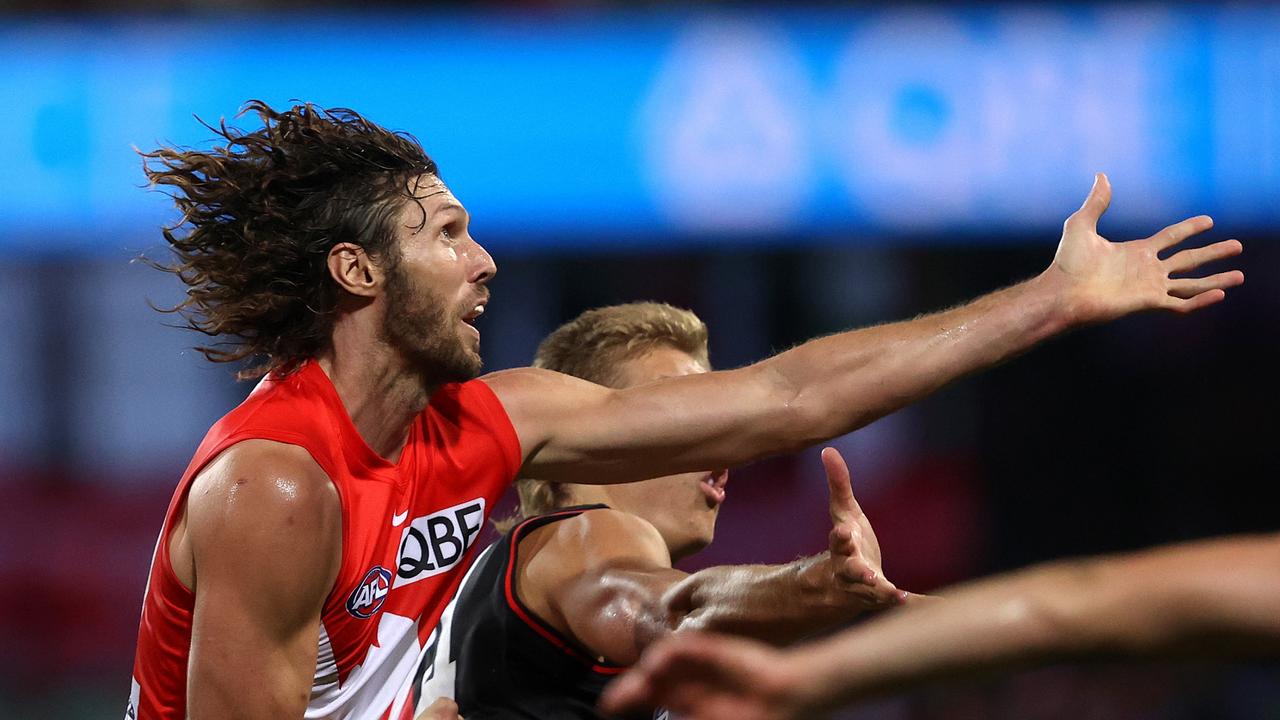 Tom Hickey will come in to Sydney’s team for the suspended Peter Ladhams.

Tom Hickey should come in for Peter Ladhams after making his way through the reserves. The Swans might look to make some changes given the disappointing loss to Port Adleaide and coach John Longmire might look to youngster Dylan Stephens for some run and carry. Oliver Florent has been a promising player for a few seasons but might be one that needs to find some form in the VFL.

West Coast made wholesale changes last week for a host of returning stars but it won’t need to do the same this week after arguably its best performance of its dismal season to date. Could win number two be on the cards against Essendon on Friday night? Edwards appears the standout candidate to replace intercept star McGovern after being dropped last week, while Alex Witherden responded to his axing with 32 disposals and 16 marks in the reserves and should come into consideration.

English was a surprise out with a delayed concussion which is disappointing given he looked very good against the Giants. Jordon Sweet showed he was a capable replacement earlier in the season while veteran Mitch Wallis, who has been a medical sub recently, is the perfect replacement for the unlucky Weightman who is most likely to only miss one week with a dislocated elbow.

Originally published as AFL Round 15: Every club’s predicted team changes