Melbourne Football Club will be known by another name for the coming rounds as the club seeks to acknowledge its history.

For Rounds 10 and 11, as part of the league’s Sir Doug Nicholls Round, the Demons will become Narrm Football Club.

The initiative has been unveiled on Monday morning with former Demon Aaron Davey saying he was “delighted” to be part of a big day in the club’s history.

Club chief executive Gary Pert said it had been in motion for two years and would finally come to fruition.

“Today is an exciting day, as we announce Narrm Football Club to our members, supporters and the wider football community,” Pert said.

“This initiative has been a focus of our RAP Committee for the past two years and is as much about acknowledgement and education as it is celebration.

“We have a rich Indigenous club history at Melbourne, from welcoming our first Indigenous player, Eddie Jackson, in 1947, to launching our second Innovate Reconciliation Action Plan earlier this year.

“It’s exciting to be building on this and taking a step further on our own journey, while bringing our fans along with us.

“Our vision for reconciliation is, through AFL, to unite Aboriginal and Torres Strait Islander peoples with non-Indigenous people, to understand and embrace history, culture and community.

“We hope with the Narrm Football Club initiative, we can continue to do just that and work towards a fully reconciled Australia.”

The club’s AFL Women’s team will also adopt Narrm in the AFLW indigenous round.

HOW DEES USED COVID CHAOS TO SEND BIGGEST WARNING YET

Not even Covid can stop these Demons.

Melbourne defied being without coach Simon Goodwin and seven premiership players to extend its winning streak to 14 games with a 10-point victory over a plucky Hawthorn at the MCG.

Jake Lever and Jack Viney returned from the same situation for Saturday’s match, while Christian Salem and Michael Hibberd are also injured or on the way back.

But the Demons’ enviable depth and star power proved too much, although stand-in coach

Adem Yze would be disappointed with a goalless final term that gave the Hawks a sniff. “Through that disruption has given us opportunities and we had players come back in like (Jake) Melksham, Tom McDonald, players like that who have really been in good form at VFL level but just waiting and biding their time for opportunity,” Yze said post-match.

“So we looked at it both ways, the obvious disruption but then the opportunity that came after that and I thought our boys dealt with that really well.

“A lot of teams will realise that it’s not only the players who miss, we had Jack Viney and Jake Lever them coming back from Covid protocols who had disruption of no training so they can be a bit rusty.

“So really we had six or seven players impacted and that is why we are proud of the fact we can deal with that. We can have players come in and play a role when needed, and we end up having a good solid win.”

Captain Max Gawn monstered sixth-gamer Max Lynch in the ruck and even snuck forward for two long-range goals, while Christian Petracca and Clayton Oliver took turns dominating in the centre. They have become the best trio in the competition, but had plenty of support, with Ben Brown benefiting from their work with a season-high four goals as he continues to prove a bargain pick-up.

Fringe forward Toby Bedford also enjoyed some nice moments, including his first-ever goal, after being an unused substitute for most of the season.

There was an inevitability about the result once the reigning premier shook off an early 15-point deficit to almost get back on level terms by quarter-time.

Hawthorn hung on for dear life until Melbourne put its foot down with a six-goal-to-three third term that opened a match-winning gap despite the Hawks making things interesting in the dying minutes.

“We’ve come up against a team that hasn’t been beaten for a long time and it would’ve been a great win for our boys but I think we still take some belief out of that performance,” Hawthorn coach Sam Mitchell said.

“They’re the benchmark for a reason and we just weren’t able to sustain it, so there’s a level of pride in the performance and the effort, particularly after a fadeout last week (against Sydney), to finish really strongly.

“(Off a) five-day break, playing against a really good team and to run the game out showed a lot of heart, but, by the same token, I’m extremely disappointed for the boys, in particular, because they left it all out there.” The Hawks pushed the Dees all the way, but the premiers just had enough polish. Picture: AFL Photos/Getty Images

But the Hawks will rue their inability to finish in front of goal, especially early, with the usually reliable Jack Gunston and Luke Breust combining to kick 1.6

The Hawks’ three wins through seven rounds have exceeded most external expectations but Mitchell said he was gauging his side’s improvement in different ways.

“What we’re trying to do is build what Melbourne have,” he said.

“They’re a formidable side, they’ve been undefeated for a long period of time, have just played in a premiership and there’s not a lot of complacency about them.

“That’s what we’re going towards, so we’re looking to make progress in that direction as quickly as we can and Melbourne didn’t build their premiership team overnight.

“We’re doing some things that are working well and we’re looking to make progress in that direction. How quickly it goes, there’s certainly no ceiling from us about it.” 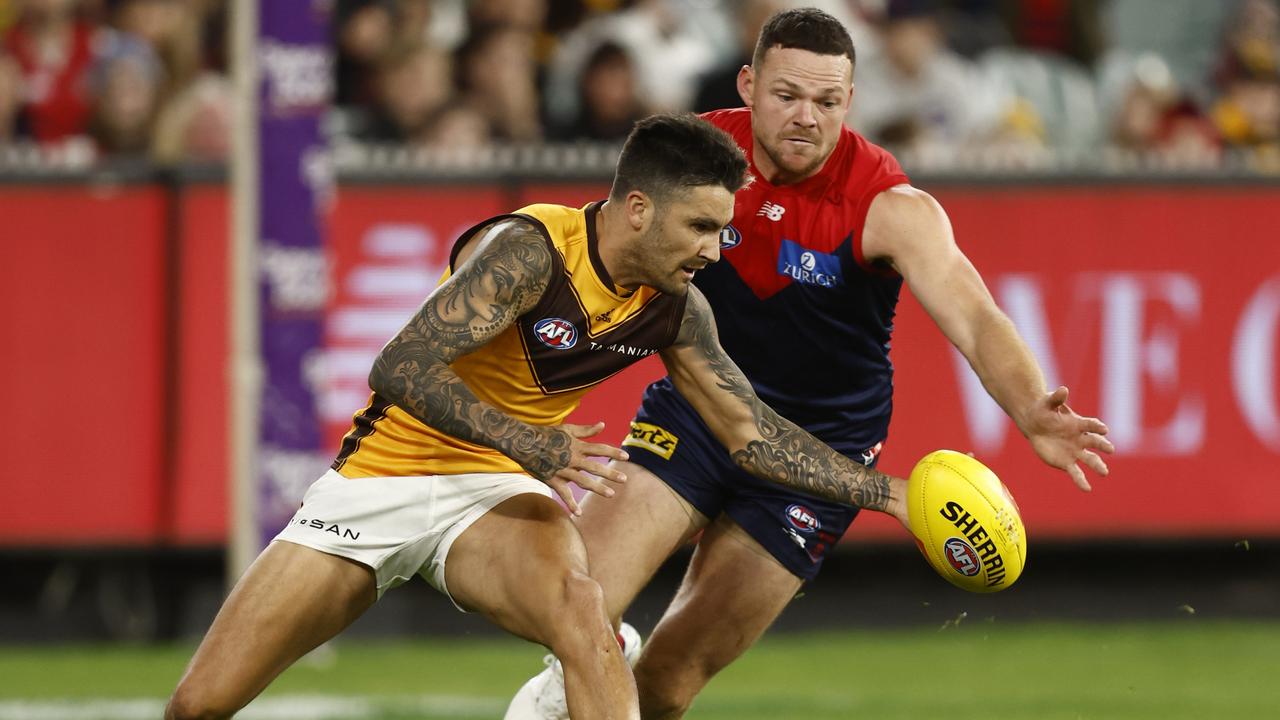 No team’s started better than Sam Mitchell’s Hawks in the past month – but the problem is they have little to show from it.

They kicked the first two goals against St Kilda but lost by 69 points, then drilled the opening three without Geelong touching it a week later and had to rally late to snatch a 12-point victory.

Hawthorn managed the first five majors at Sydney’s expense but went on to lose by 41 points, and jumped out to a two-goal then three-goal-to-one lead over Melbourne on Saturday.

But the Demons almost headed the Hawks before quarter-time then assumed control by the second term on their way to a 10-point defeat of Mitchell’s men. Ben Brown celebrates a goal during the Round 7 win. Picture: Darrian Traynor/AFL Photos

Only three of Ben Brown, Luke Jackson, Tom McDonald and Sam Weideman can ever fit into Melbourne’s loaded attack.

Brown and Jackson have established themselves as ‘locks’, leaving McDonald and Weideman to battle it out for the final key forward spot.

Weideman started the season in the VFL but it was McDonald who fell out of favour last week, before earning a reprieve when Jackson entered Covid protocols.

The veteran was switched into defence when Joel Smith was subbed out but looked more dangerous than he has for a long time and there will be a tough selection call ahead. Skipper Max Gawn was the star of the Demons on Saturday. Picture: Quinn Rooney/Getty Images

‘Not the end of the world’: Scott’s spin on GMHBA debacleRevealed: Unlikely inspiration fuelling Dusty’s comebackSunday Tackle: Why do clubs keep trading away their futures?