AFL 2022: Pat Lipinski’s evolution as midfielder simply breathtaking as he flourishes as a Magpie

Pat Lipinski knew his time was up at the kennel, but he wasn’t wasting any time not preparing for the next phase of his career. Now he’s at the Magpies and it’s paying massively.

Travelling the country in a finals hub that resembled incarceration, Lipinski sweated through gym workouts knowing his career at the Western Bulldogs hadn’t worked out.

The 23-year-old was picked in the best 22 in nine of the first 11 games last year and then none of the final 15 games.

“I was kind of in pre-season mode (in the finals hub) personally, because I knew I wasn’t going to be playing,” he told the Herald Sun. Patrick Lipinski has the potential to be one of the finds of the year if he can maintain his new-found form at Collingwood.

“I was basically doing gym every day for a while. I was working really hard and still training and just having fun with everyone

“It was actually a super, super fun month for me, just hanging around with everyone and enjoying a great finals run.”

Lipinski — last named in a squad in round 20 — read the tea leaves.

“I hadn‘t played since round 11, so I didn’t think I was going to get a chance and you don’t really change a finals team when you’re winning,” he said.

So why was Lipinski suddenly on the outer at the halfway point of the season?

“Obviously they had a very strong team and they just went for a different look,” Lipinski said.

“I was playing a bit of wing and it was probably just some of the open field stuff that needed to be a bit better. 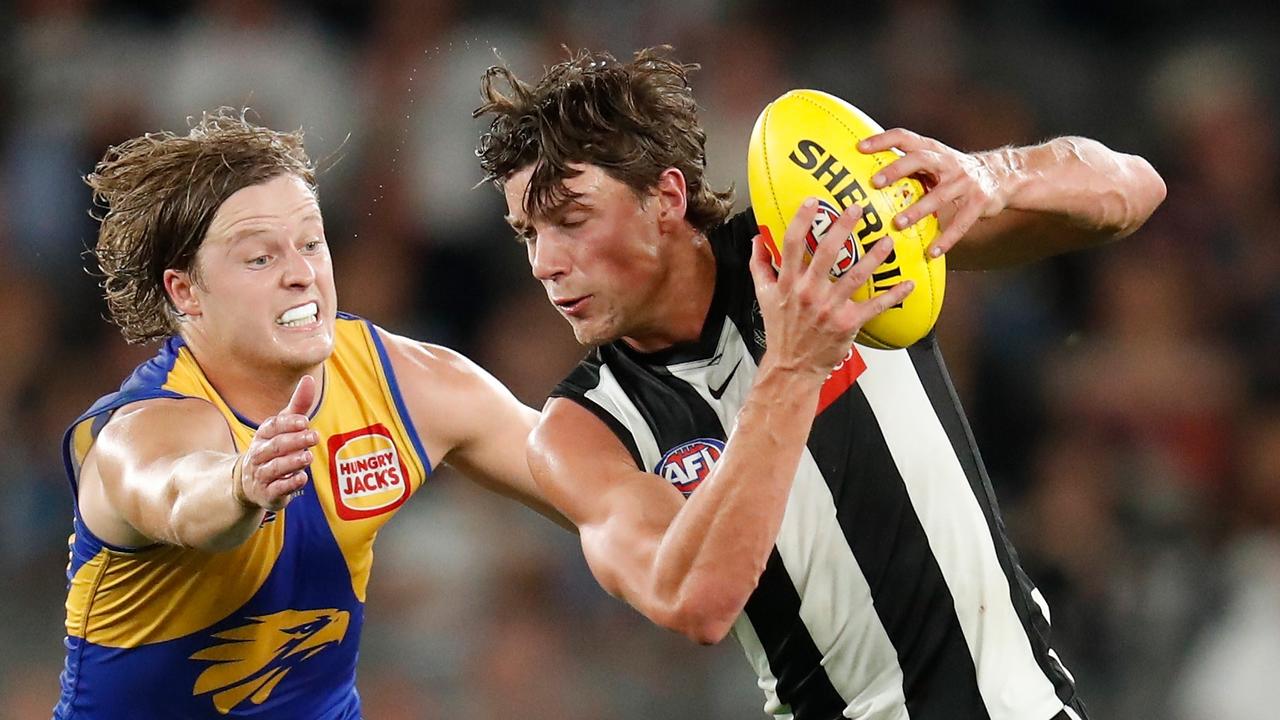 The lifelong Bulldogs supporter is suddenly on the inside at Collingwood and looming as one of the finds of the season.

Exchanged for pick 43, Lipinski attended 53 centre bounces in the first month of the season.

Last season he attended nine. Even Tom Liberatore, the No. 1 clearance player last year, has found himself out of the centre much more this year.

But Lipinski’s evolution as an onballer at the Magpies has allowed Josh Daicos and Steele Sidebottom to light up the wings.

In round his GPS clocked 15.2km and in round 3 he chalked up 16km, running further than every other player in a Saturday night thriller against Geelong.

Lipinski still lives in Port Melbourne with Aaron Naughton — Tim English recently moved out — and the Dogs would’ve liked to keep him, especially given this year’s spate of injuries. Lipinski was used on the inside in 2019 at the Bulldogs but played his final two seasons under coach Luke Beveridge predominantly on the wing.

The kid once coached by Marcus Bontempelli’s uncle knew all he needed was a chance.

The first two times Lipinski was dropped he responded with 40 disposals and then 36 disposals, three goals and 198 rankings points.

The freshness of the Magpies excited Lipinski. A new beginning at a club embarking on a new direction.

Former AFL coaches Justin Leppitsch and Brendon Bolton had signed on with new Collingwood coach Craig McRae and this year Lipinski has palled up with Charlie Dean and the Daicos boys.

With Melbourne in lockdown, Collingwood coach Craig McRae walked Lipinski through his plans over a stroll around Albert Park Lake.

Lipinski’s 26 disposals against the Magpies in round 1 last year stood out to Pendlebury.

In round 1 this year and Lipinski lumped nine coaches votes lining up alongside Pendlebury.

“(He’s a) smooth mover, great skills and I think it was a role we needed to fill,” Pendlebury said.

They say it takes one to know one. Pendlebury is probably the smoothest mover of the modern era and Lipinski was known as ‘Mr Clean’ in recruiting circles.

Like Pendles, Lipinski even has a basketball background to boot.

When clubs dug for dirt on Lipinski before the 2016 draft they found ‘Mr Clean’ was also squeaky clean.

Universally loved at Whitefriars College, he is starting to become a fan favourite at Collingwood.

Lipinski has never played in front of 60,000 fans and the last time he attended a packed MCG was clicking through the turnstiles with his mum and dad, draped in Bulldogs colours, for the 2016 premiership.

On Anzac Day he will run on to the grass, his parents and partner among the 85,000 in the stands.

“I think it was probably one of the first things they (Collingwood) mentioned – ‘Oh, you get to play Anzac Day’,” Lipinski said.

“We’ve had some loud stadiums, but this will be very cool,” Lipinski said.

High-flying Geelong rookie Ollie Dempsey has been handed a debut for the Cats, capping a stunning rise after swapping basketball for footy late in his days at Carey Grammar.

But, in a double blow, injured pair Jack Henry and Patrick Dangerfield won’t travel to Hobart for Sunday’s clash with the Hawks.

SCROLL DOWN TO SEE ALL THE ROUND 6 TEAMS

Henry (foot) and Dangerfield (calf) were pulled out of Geelong’s initial squad of 26 that was named on Thursday, with Zach Guthrie and Francis Evans added into the emergencies. Dempsey joins Shaun Higgins and Jake Kolodjashnij as additions to Geelong’s 22, with Luke Dahlhaus managed out but still a possibility to act as medical sub.

Scott said the Cats would likely take 25 players from their squad of 26 to Hobart to face the Kangaroos.

Scott said “you can rule out a terrible injury” to important defender Henry.

While he was named an emergency, Esava Ratugolea is in the mix only as back-up in case of a Rhys Stanley injury, with the Cats keen for him to get his ankle as close to 100 per cent as possible before playing. 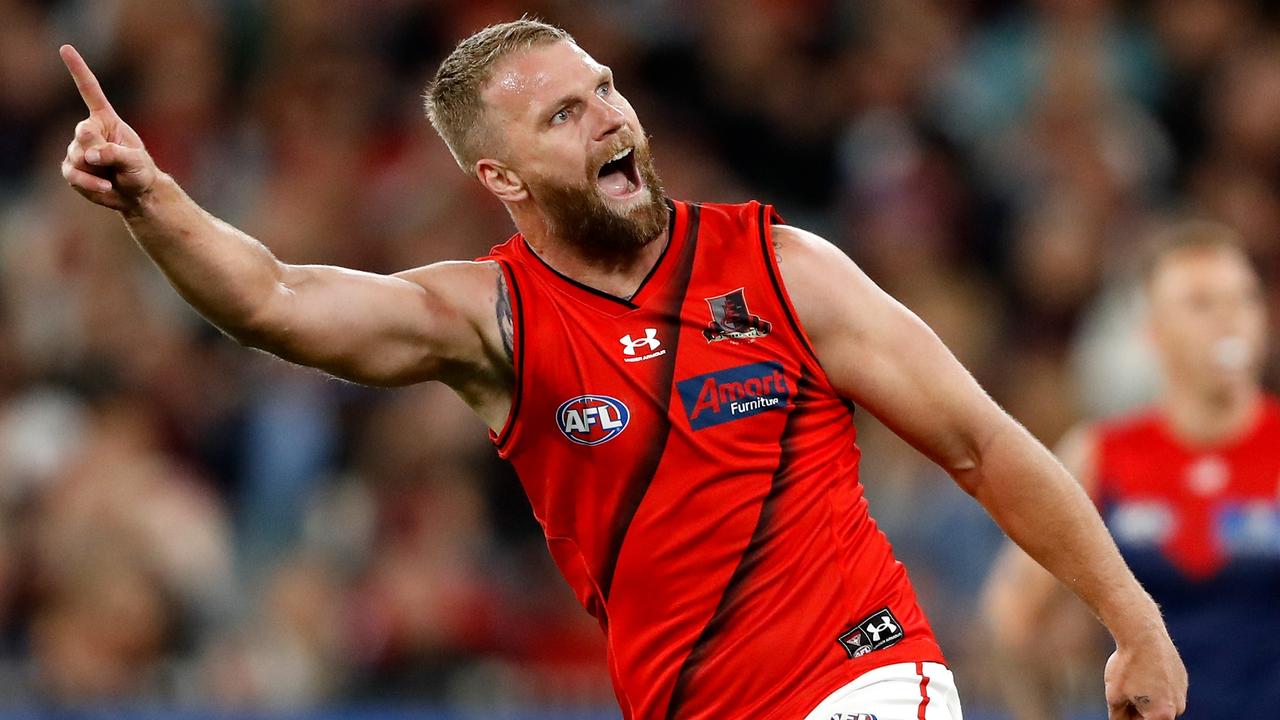 Meanwhile, Essendon has sprung a major shock at the selection table by naming Jake Stringer and Zach Merrett in the team to tackle Collingwood on Anzac Day.

Both stars were expected to be at least another week on the sidelines — Merrett with an ankle injury and Stringer overcoming a hamstring injury.

Whether they line up on Monday will become clearer when Ben Rutten holds his weekly press conference on Saturday when the Bombers will cut their 26-man squad back to 22.

The Saints brought back Jimmy Webster and omitted Jarrod Lienert and Ryan Byrnes. The Pies have run out of patience with Mason Cox. Picture: AFL Photos/Getty Images

Other big names to come in across the competition for round 6 include Lance Franklin for Sydney, Patrick Cripps at Carlton, and Ollie Wines has been picked to return for Port Adelaide.

The Western Bulldogs lost a key player in Tim English to injury for the Adelaide clash in Ballarat on Saturday, while medi-sub Mitch Wallis will miss for personal reasons.

Dusty in a ‘better space’ but still not training

Richmond star Dustin Martin is in a “better space” but is still yet to return to training with the Tigers.

There had been speculation that Martin could make a comeback to training on Thursday, having returned to Melbourne after spending time in Sydney.

It is understood that an AFL return is on the cards in coming weeks, after Martin has taken personal leave since late March.

However, Richmond coach Damien Hardwick said there was still no firm update on the triple-premiership player’s availability.

“Like we’ve said all along, we’re probably reluctant to provide a running commentary,” Hardwick said on Thursday morning. Dustin Martin is in a better place, according to the Tigers. Picture: Getty Images

“But what we do know is he’s in a better space. When we do know more, we’ll certainly give you guys some more information. But at this stage it’s the same as it has been and we ask you to respect his privacy and we’ll continue to monitor the situation and give information as it becomes available.”

The Tigers are expected to recall some other premiership stars for Sunday’s Anzac Eve clash with Melbourne, including midfielder Kane Lambert.

Lambert has not featured at AFL level since Round 22 last year due to an ongoing hip injury but starred in the VFL with 25 disposals and two goals last weekend.

“He’s played a half and three quarters (in the VFL) so we think he’s ready to go. Is he going to be at his very best fitness wise? Well, he’s a pretty fit guy overall. Footy wise he hasn’t played a lot, but we’re pretty confident that what he can bring is pretty good. He’s just such an important player to our club, he’s a coach on and off the field, he’s just a wonderful ambassador for us and the way he plays the game.” Kane Lambert is expected to return for the Tigers. Picture: Getty Images

Wingman Kamdyn McIntosh has also been cleared to return after missing last week’s loss to Adelaide under AFL Health and Safety Protocols.

The Tigers are also hopeful of bringing back ruckman Ivan Soldo to combat the powerful Demons ruck combination of Max Gawn and Luke Jackson.

However, Soldo is expected to be released from hospital on Thursday afternoon after suffering an infected toe.

“We are still hoping he’ll be available to play,” Hardwick said.

OUT: Atkins, Davies (both omitted)

Originally published as AFL 2022: Pat Lipinski’s evolution as midfielder simply breathtaking as he flourishes as a Magpie