AFL teams: See all the ins and outs for round eight of the 2022 AFL season

The Eagles have made a stack of changes, and will blood another WAFL star. Meanwhile, the Demons have dropped four players.

West Coast have made seven changes to its side, with a WAFL star to make his AFL debut.

South Fremantle midfielder Jake Florenca, a member of the Eagles Covid-19 contingency list, will make his debut for a depleted Eagles outfit against Brisbane on Saturday night.

It comes as reigning premiers Melbourne axed four players ahead of its top four clash against St Kilda.

Florenca got a late night phone call on Wednesday that set in wheels the motion for an AFL debut.

SCROLL DOWN TO SEE ALL THE ROUND 8 TEAMS

He is joined in the Eagles side by star defender Tom Barrass, Josh Rotham, Jamaine Jones, Isiah Winder, Luke Foley and Callum Jamieson.

The mass changes come as the Eagles are again hit hard by Covid-19, with coach Adam Simpson also caught up. 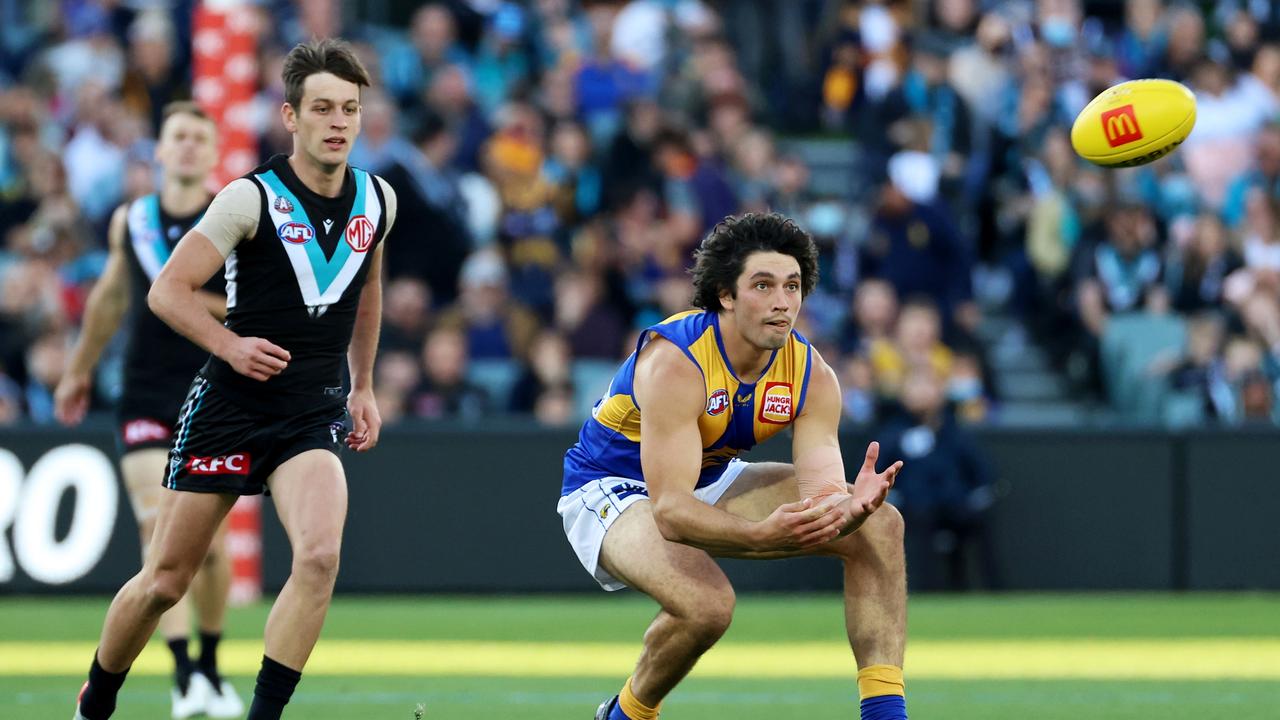 Tom Barrass is among the ins for the Eagles. Picture: James Elsby/AFL Photos via Getty Images

Greg Clark, Alex Witherden, Jackson Nelson and Luke Strnadica are also in Covid-19 protocols, while Luke Shuey and Willie Rioli are out through hamstring strains and Xavier O’Neill joins them with a knee injury.

Hugh Dixon has been dropped with Harry Edwards to ruck for the Eagles.

The club confirmed Dixon would be the medical sub after being named as an emergency along with top-ups Declan Mountford, Angus Schumacher and Logan Young.

Luke Dunstan, Jake Melksham, Toby Bedford and Sam Weideman have all been omitted by the Demons for their clash against the Saints on Sunday.

Joel Smith also comes out of the side through injury. Luke Jackson is back for the Demons. Picture: Dylan Burns/AFL Photos via Getty Images

The Saints also have some big inclusions of their own with Rowan Marshall and Zak Jones coming in.

Tom Campbell, Marcus Windhager and Jarrod Lienert have been omitted by the Saints.

Carlton has brought back Zac Williams for their clash against Adelaide at Marvel Stadium.

Liam Stocker comes out of the side because of suspension.

The Crows have brought in Will Hamill and Mitch Hinge while Harry Schoenberg moves into the 22 after being the medi-sub last week.

Matt Crouch was surprisingly dropped by the Crows, who also lost Brodie Smith and Ned McHenry to the AFL’s concussion protocols.

Earlier on Friday, Richmond suffered a double blow ahead of Dustin Martin’s MCG homecoming against Collingwood with Dion Prestia and Nick Vlastuin late withdrawals due to illness.

While the Magpies got a boost at their captain’s run with Taylor Adams, Brayden Maynard and Nick Daicos all cleared to play despite missing Thursday’s training session, the Tigers have had to make two key changes on the eve of the big Saturday afternoon clash.

Prestia had been battling Achilles soreness but was named to play, but he and Vlastuin will now be replaced by Marlion Pickett and Rhyan Mansell.

Martin will play his first game since Round 1 after returning to the club recently, while former skipper Trent Cotchin is back after being rested last week. Nick Vlastuin and Dion Prestia have been ruled out. Picture: Michael Klein

Dusty back as two captains out

Richmond champion Dustin Martin will make his return to the game against Collingwood on Saturday.

And the Western Bulldogs have dropped a selection bombshell by resting captain Marcus Bontempelli ahead of Friday night’s clash against Port Adelaide.

The Bulldogs have listed their skipper as being “managed” for the round 8 clash.

Bontempelli’s output has dipped in recent weeks as he has spent more time forward while dealing with an ankle/foot concern.

The Pies have brought in Ollie Henry and Trent Bianco and dropped Callum Brown and Jack Madgen.

Meanwhile, Geelong regains Patrick Dangerfield for its clash against the unchanged GWS Giants but Joel Selwood will miss with a quad injury.

Nick Hind is back for Essendon and Dylan Shiel is in the Bombers’ starting 22, and Melbourne has made six changes for its clash against St Kilda with Luke Jackson and Kysaiah Pickett among the Demons’ inclusions.

Carlton named Zac Williams and Paddy Dow to face Adelaide but not George Hewett, who will miss another week with a calf injury.

Fremantle has lost six players to the AFL’s Health and Safety Protocols – Griffin Logue, Blake Acres, Travis Colyer, Rory Lobb, Lloyd Meek and Michael Frederick – and the AFL has extended the deadline for team lodgements for the Brisbane Lions and West Coast after Covid ran through the Eagles again.

In the good news story of the round, injury-cursed Gold Coast defender Rory Thompson will play his first game in four years against Sydney. Richmond’s physical performance manager Peter Burge said Martin had completed a “huge workload” to bring himself back up to AFL speed and is set to boost a Tigers line-up in form following a 109-point thumping of West Coast last weekend.

Martin returned to Punt Rd for the first time almost two weeks ago after more than a month away as he took time away to cope with the loss of his father, Shane, who died last December.

Coach Damien Hardwick said on Thursday morning that Martin’s return was a massive boost for the Tigers.

“If he gets through training, he will play,” Hardwick said.

“It’s a massive step for not only Richmond, but I think for AFL people want him back as well.

“The level of expectation, we’ll see how he operates. He has been training well, he looks fit, so we are looking forward to welcoming him back.

“Hopefully he has an impact for us on the weekend, which I’m sure he will.

“We got a massive lift last week (with Martin back at the club). He is such a vibrant personality within our footy club. He is an energy-in type of guy. “Just him walking in the door last week was a significant boost to our club and hopefully we get the same boost when he walks on the hallowed turf of the MCG this week in front of our fans.

“We are just glad he is back and in a great space and look forward to seeing what he can produce on the weekend.”

Hardwick conceded his fitness was still not at its peak but the team was happy with how he had presented so far.

“He is going to be not at his optimal but he has certainly trained as hard as he could without being in a team environment,” Hardwick said.

“We are pleasantly surprised by how he’s moving and how he’s operating thus far but, once again, we are playing one of the hardest games in the world.

“Our level of expectation is we will put him out there and see how he goes. A 50 per cent Dustin Martin is still a pretty good player in our books.” 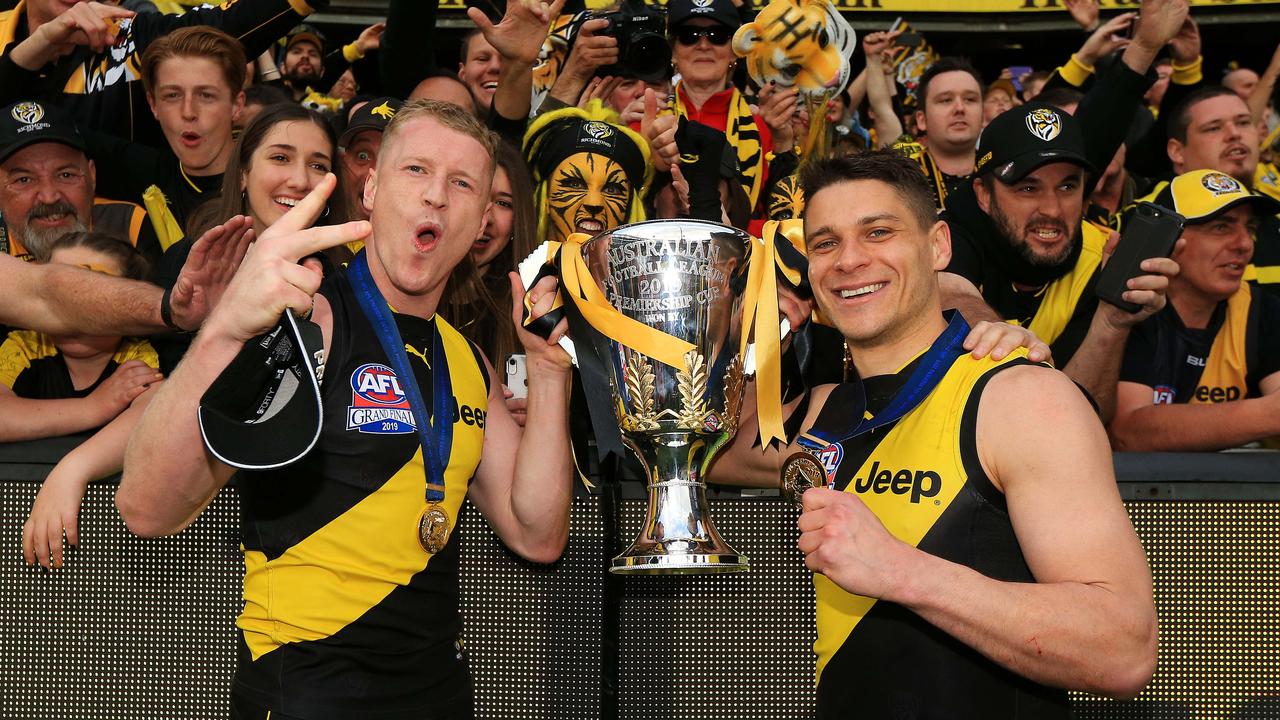 Meanwhile, two-time premiership Tiger Josh Caddy announced his retirement effective immediately after 174 games with Richmond, Geelong and Gold Coast. Caddy played in the Tigers’ 2017 and 2019 premiership sides after moving from the Cats in a high profile trade in 2016.

The veteran has struggled in recent years with a hamstring injury, prompting his decision to call time.

“Josh can walk away from his AFL career with his head held high and proud of what he has achieved,” Richmond talent manager Blair Hartley said.

“His skillset made us a better team throughout a successful time for our club and we value the connections and memories made along the way.

“We wish Josh all the best for the future, he will always be a Richmond man.”

Caddy’s retirement opens up a spot on the Tigers list ahead of next month’s mid-season draft.

Saturday May 7, 7:25pm at Marvel Stadium

Teams to be released on Friday

Originally published as AFL teams: See all the ins and outs for round eight of the 2022 AFL season