AFLW 2022: All the latest trade, contract and fixture news news

Just weeks out from the potential start of AFLW preseason, Carlton coach Daniel Harford says he hasn’t got any idea about anything in relation to the next season, declaring it a ‘very bad outcome’ for the game.

No sporting competition in the world would be weeks out from a proposed preseason with such scarcity of information, Carlton coach Daniel Harford has declared, describing the current holding pattern for AFL Women’s as “a very bad outcome”.

Harford, who will lead the Blues for the next two seasons, said the flagged August start date had come with no information or timeline since the league’s commission provisionally approved the new spot in the calendar for the game last month.

And with the preseason potentially looming within weeks, Harford said he has “got no idea about anything”.

“No one’s saying anything. It’s very difficult.,” he said on RSN Breakfast on Thursday.

“I know the negotiations for the CBA between the players and headquarters is to-ing and fro-ing and having little moments and you probably can’t do too much without that, but seriously.

“And we don’t actually know who’s playing for us yet. There’s no draft timeline. It’s a bad outcome. It’s a very bad outcome.

“(If it’s not August), well just tell us. Just tell us. I’m not sure too many competitions would be running like this across the globe.”

Harford joked with Port Adelaide counterpart Lauren Arnell that “I was hoping you might know”.

But he said clubs were desperate for clarity on the calendar.

“We’d love some more detail and some finite number and timeline,” he said.

“At some stage, if anyone’s listening, a timeline would be nice for the competition. Even just for trades, list management, that sort of stuff. Draft, maybe.” 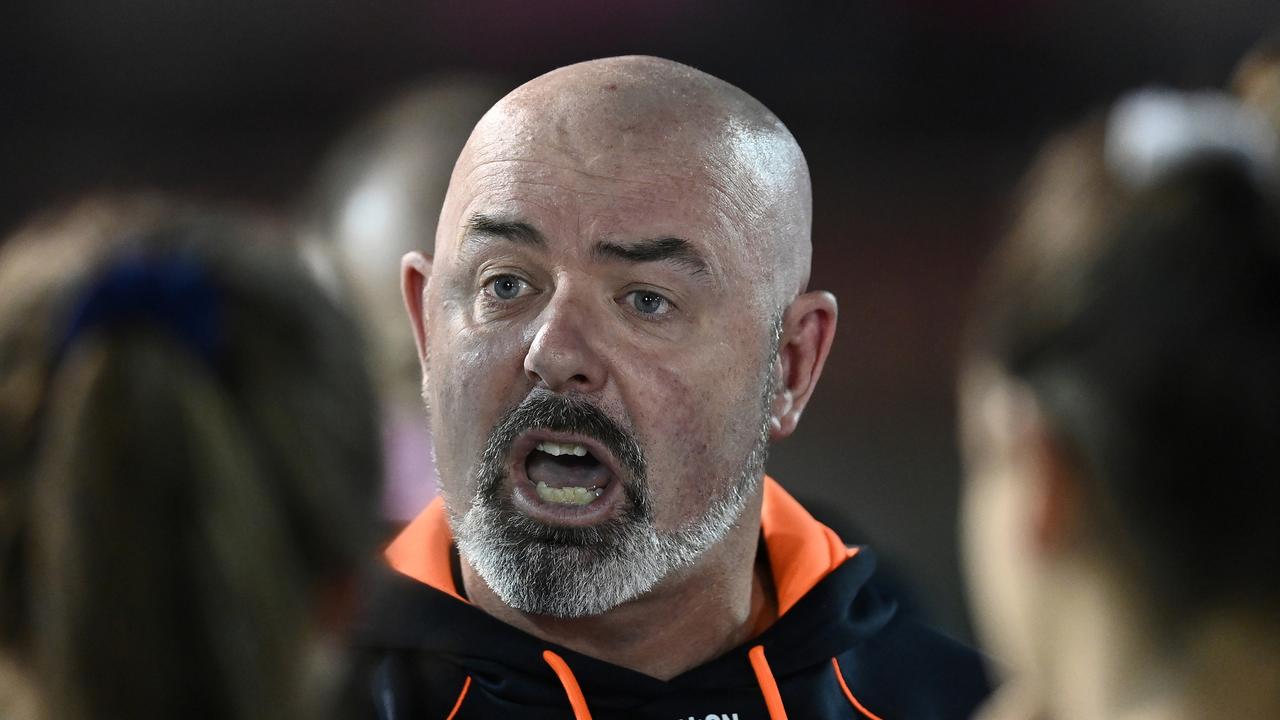 Daniel Harford has called out the uncertainty around the start of the next AFLW season on his breakfast radio show. Picture: Getty Images

The 31-year-old, who was delisted at the end of the 2021 season and remains on the Power’s Covid top-up list in 2022, said he was thrilled to be back at the club where he played 13 seasons in the Power jumper.

“I’m really excited to actually get a group of girls to be able to work with and implement some of my own thoughts and ideas and drills and watch it all come to the fore on game day,” Hartlett, who is also playing for West Adelaide in the SANFL, said.

“(Alberton) is a place I’ve been coming to every day for the last 13 or 14 years, so this year it’s felt odd not doing that, so being here a bit more frequently will be nice and seeing some familiar faces around the place. 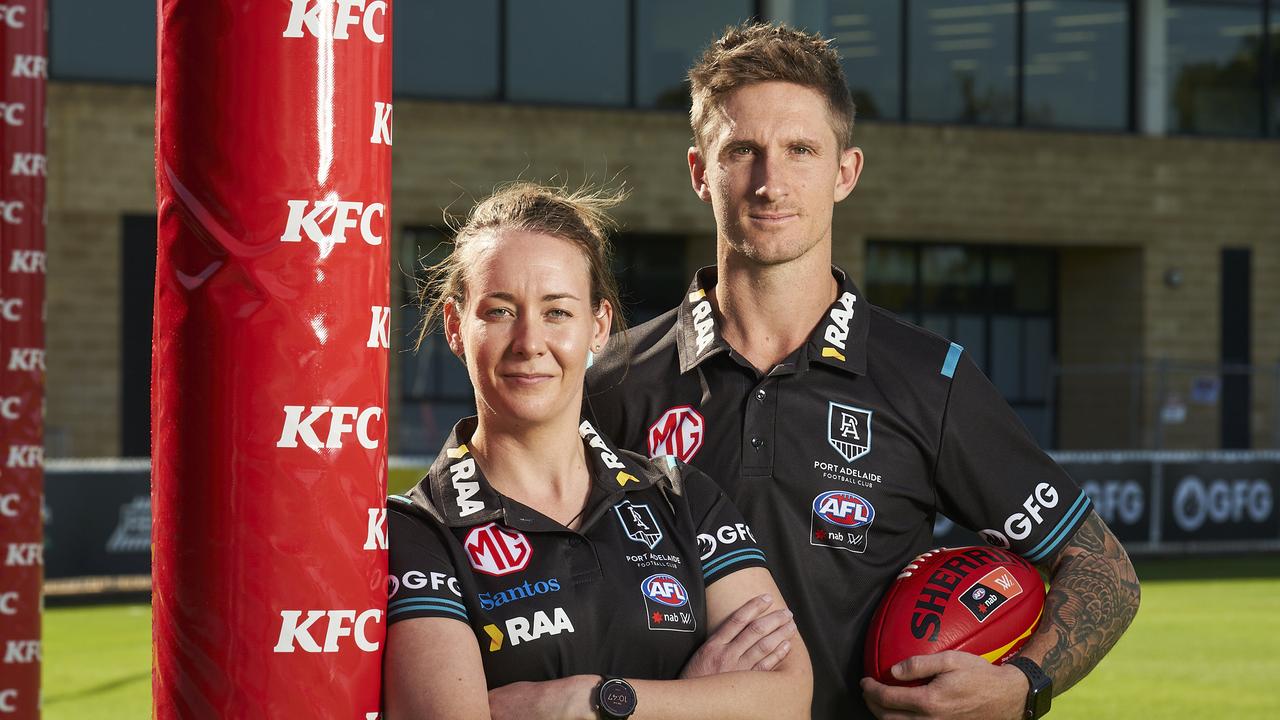 Hartlett said he had been developing his coaching and communication skills over the past few years through various roles coaching under-16s and under-18s junior sides in the SANFL. He is currently the youth development officer at West Adelaide (a role he will continue).

“But I just think the enthusiasm that this new group of people will bring to this football club is going to be so exciting and I can’t wait to see what we can accomplish in our first year,” he said.

The 193-game Power player said he was expecting to take up a line in the coaches’ box, with the final details still to be determined.

Hartlett’s appointment comes as the Power’s inaugural head coach Lauren Arnell officially started her role at Alberton on Monday after relocating from Brisbane.

Arnell, who played 36 AFLW games over fives seasons with both Carlton and Brisbane, said she already felt at home at Alberton and was looking forward to working with Harlett.

“The exciting thing with Hamish is he’s still playing state league footy, but just come out of AFL and what he’ll be able to pass on from a Port Adelaide perspective, like what it means to be here at this football club, but then also, his ability to transfer knowledge within our playing group and develop our young players is going to be really exciting,” she said. 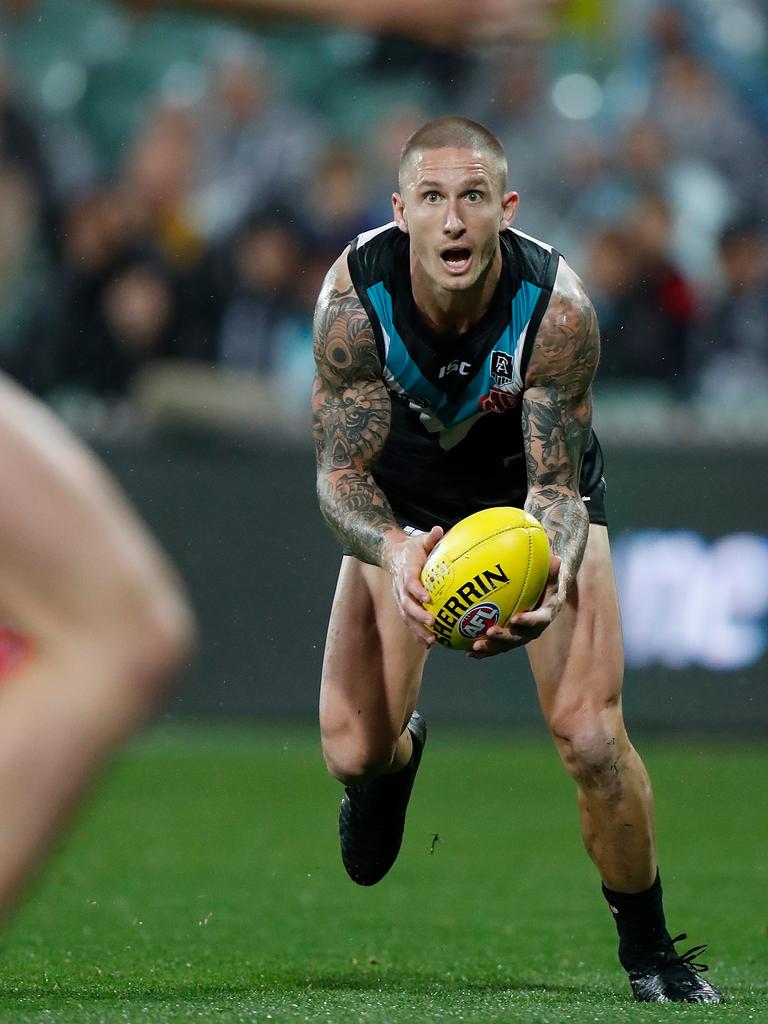 “Hammer” in action for the Power during the 2020 season. Picture: Getty Images 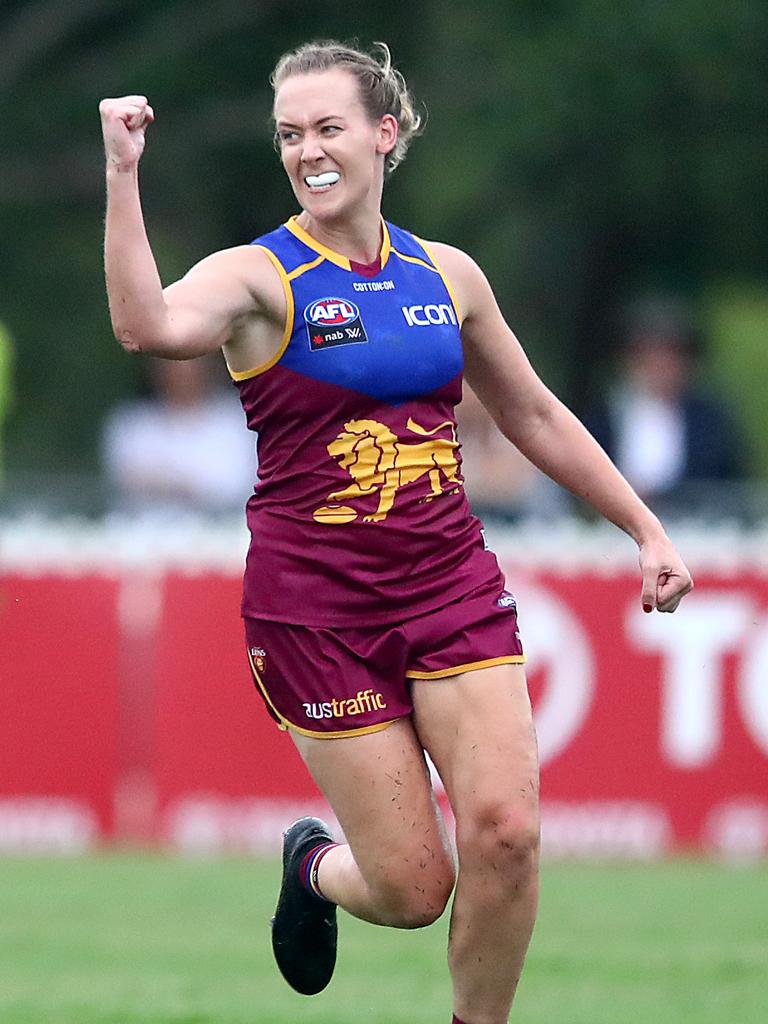 Arnell celebrates a goal for the Lions. Picture: Getty Images

Arnell, a 2021 Lions premiership player, said appointing a player welfare manager and locking in a high performance manager were now top of her list.

“And obviously I’m also having quite a lot of catch-ups around that assistant coaching space … rounding out our team is a priority, alongside spending time with our existing player signings,” she said.

The Power have so far announced two players who have committed to sign once the AFLW’s sign and trade period officially opens with veterans Erin Phillips and Angela Foley poached from the Crows.

Arnell said the experience the two former Adelaide leaders would bring was invaluable.

“We know that the young players and a chunk of our list will come out of state league and those athletes won’t have experienced an AFLW environment before, so it’s very, very exciting for me to know that we’ll have those player leaders in place to support and guide the next wave of talent coming through,” she said.

Port Adelaide is expecting to announce more the commitment of more players in the coming week.

Essendon is set to lure Collingwood forward Sophie Alexander as the Bombers continue to build an impressive list for their entry into the AFLW.

The Bombers have already had Carlton pair Madison Prespakis and Georgia Gee, Western Bulldogs forward Bonnie Toogood and Fremantle speedster Stephanie Cain committing to be part of the their inaugural campaign under coach Natalie Wood.

They announced on Tuesday that Alexander, who has kicked the second most goals for Collingwood in the AFLW, had committed to signing with the Bombers. Essendon said it would now work with Alexander, her management and the AFL to facilitate her request once the AFLW sign and trade period opens.

Alexander transitioned from basketball to football in 2017, and after a successful season with the Eastern Devils, joined Collingwood’s inaugural VFLW side.

After impressing at VFLW level, Alexander was elevated to the Pies’ AFLW list and went on to play 31 games across her four years at the club.

Across her 31-game career, she has kicked 16 goals and averaged 5.9 disposals a game.

Essendon general manager of football Josh Mahoney said Alexander’s experience and football journey would make her a great addition to the Bombers as they embark on their AFLW journey.

“Sophie is another great addition to our AFLW side. Since swapping over from basketball, she has worked hard to develop her game, which reflects her strong work ethic and determination to improve,” Mahoney said.

“She will be a great asset and will contribute to our club standards on and off the field.”

“Coming from a basketball background, Sophie’s journey to the AFLW has been unique and she brings a different perspective to the game,” Harvey said.

“At 178cm, Sophie provides flexibility at either end and will bring a lot of experience to our inaugural AFLW team.

“Sophie is a lifelong Bombers supporter and we look forward to seeing her in the red and black.”

Daisy opens up on the fire that still burns strong

Daisy Pearce will play on next season as she bids to avenge grand final defeat, declaring she would be “silly” to walk away from the game as her love for it still burns strongly.

The superstar player has reportedly agonised over the decision over recent weeks as she spent time with her family, but revealed that she will play next season – tipped to start in August – opting to turn her back on potential coaching positions in an effort to win a maiden AFLW flag. “I’ve got at least one more in me,” Pearce said on Monday.

“I think since the kids, I thought to myself that it would be good to get back for one more, and I’ve kind of put this ceiling on it all the way along.

“The ‘one mores’ have turned into three more and here I am, feeling fit and healthy and like I can still contribute.

“Over and above all that, I just still love it. It’s still the highlight of my week, other than coming home to my beautiful family, to go down to footy training and (be part) of the cycle of a footy season.

“The team we’ve built at Melbourne over the last few years is special and I feel so lucky to be competing alongside such talented players and great people.

Daisy Pearce speaks to Hamish McLachlan about her decision to play on.

Pearce’s decision to play on comes amid offers from AFL clubs to be part of men’s coaching programs - including at Geelong - which will no doubt remain standing.

She has also become an esteemed media commentator.

“I’ve never been clearer on what my role in the team is and (I’m grateful) to be doing it with great perspective of having a family and other great opportunities in life,” she said.

“It’s media and footy this year, and then next year, who knows. It’s hard to forecast.

“The thing that people keep telling me, and that resonates with me, is that you’re a long-time retired. 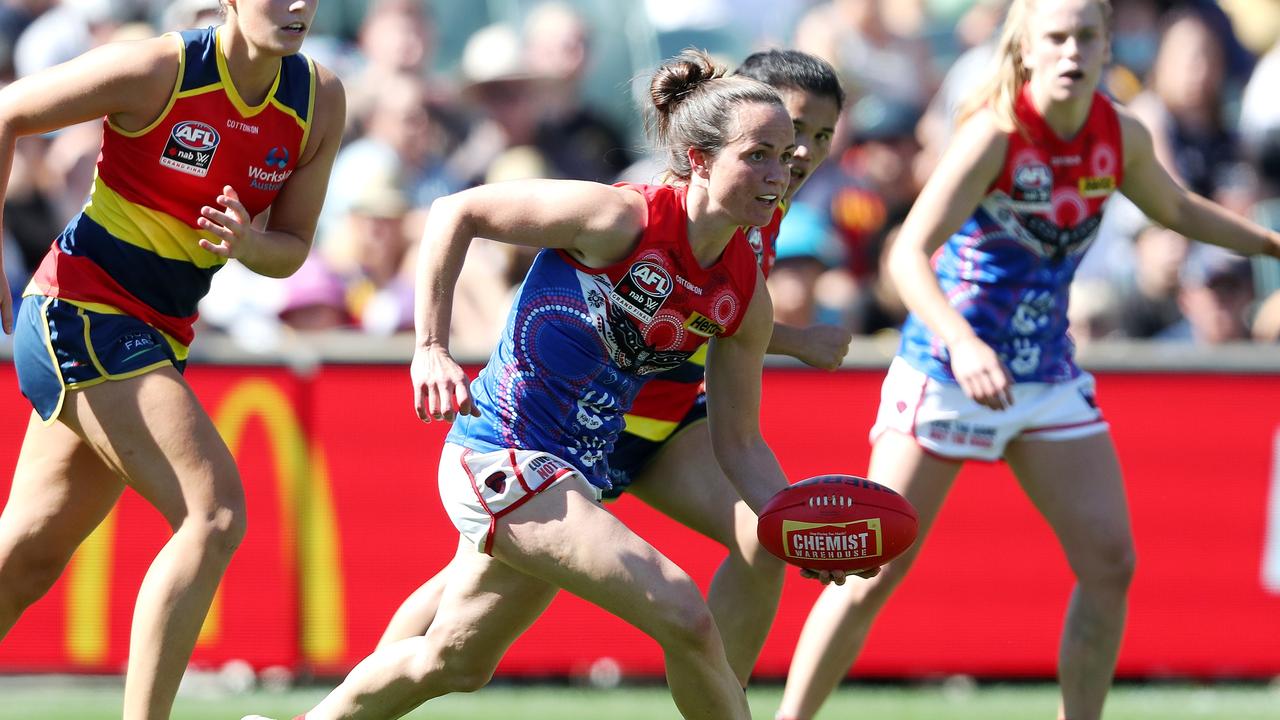 Pearce, 33, has played five seasons of AFLW – missing only 2019 for the birth of her twins, Roy and Sylvie.

The pair recently ran through the banner with their mum at the AFLW grand final at Adelaide Oval where Pearce’s beloved Demons were outdone by the Crows, which Pearce said would only continue to serve as motivation.

Inside story: How Phillips made the hardest decision of her careerDecorated Crow explains why she bailed for PortTime AFLW boss took a stand for women’s game

“It’ll drive me coming into this next season, to go close but then ultimately not be good enough,” she said.

“The Crows were too good on the day - that’ll burn over the next few months as we gear up to go again.”

Originally published as AFLW 2022: All the latest trade, contract and fixture news news