Lance Franklin kicked four goals against North Melbourne but his future was the top of the agenda at John Longmire’s post-match press conference.

Sydney superstar Lance Franklin has earned the right to make a decision on his future at the end of the season, according to coach John Longmire.

Franklin said on Saturday he was “undecided” about what he would be doing next year, putting his playing future under a cloud.

“At this stage conversations have been paused around my contract, so I can put all my focus on playing footy,” Franklin said.

The 35-year-old showed no signs of slowing down on Sunday as he kicked a game-high four goals against North Melbourne in the Swans’ 38-point win at Marvel Stadium, in a performance that might’ve increased his value for a new contract if he decides to play on in 2023.

Franklin now has a team-high 45 majors this year, but Longmire was content to let Franklin’s contractual situation play out, despite reports that the Brisbane Lions were interested in recruiting the all-time great, who now has 1040 career goals.

“Let’s just enjoy it for what it is. He’s been brilliant to watch for so long ... I’ll enjoy it too,” Longmire said post-match.

“(He’s) given the game so much, sometimes we can look into things and want black-and-white answers and this and that, and sometimes you’ve just got to sit back and enjoy the moment with him and see him play his footy and do his stuff.” While Franklin’s contractual status has become a massive talking point, Longmire downplayed its significance within the club.

But Longmire wouldn’t be drawn on how he would feel seeing Franklin playing for another team next year.

“We can get caught up in all of that and all the ‘what ifs’ rather than living in the moment,” Longmire said.

“We’ve got two home-and-away games to go, let’s just enjoy the ride a bit with him ... hopefully it goes for a few weeks beyond that.”

One of those home-and-away matches is against the red-hot Magpies at the SCG next Sunday in what is shaping up as one of the games of the season.

Collingwood has won its past 11 games, and is fresh from toppling reigning premier Melbourne, while the Swans are not only playing for a double chance, but a top-two spot which would yield two home finals.

“They’re the red-hot team in the competition, aren’t they? Them and Geelong,” Longmire said of Collingwood.

“Their ability to just keep wining has been extraordinary this year, so it’s a big game next week, isn’t it?

“They’re playing with real speed and power and they’re able to keep going.

“They’ve got some good players all over the ground and they’ve obviously got the belief in themselves as well.”

Lance Franklin has put contract talks on hold until the end of the season as the brilliant 1000-goal hero admitted he was no certainty to play on next season.

Franklin issued a statement on Saturday that he was still “undecided” about his future beyond this year with the 35-year-old unsure about “whether I continue to play next year”.

The Swans had believed they were close to a resolution on Franklin’s contract after ground was given by both parties in recent weeks.

But the sensational development will give rise to speculation Franklin might retire or be open to a move to a rival club.

“At this stage conversations have been paused around my contract so I can put all my focus on playing footy,” Franklin said.

“No further comment will be made until the season is done and I have decided about my future.

“I am still undecided and need time after the season to make a family decision about whether I continue to play next year.” “I think it’s really sensible, he’s 35 years of age (and) absolutely entitled to sit back and speak with his family after the season’s finished,” Longmire said.

“We love ‘Bud’, we love the way he goes about it and it just continues to give us an opportunity to just sit back and enjoy what he’s able to do on a weekly basis.”

Longmire said it didn’t lessen his confidence Franklin would be at the Swans in 2023.

“No, I’ve had many conversations with Lance all the way through and I’m completely comfortable where it sits,” he said.

“He’s an icon of the game and he absolutely deserves some time and space to make that decision at the end of the year with his family.

“With what he’s done for the game, I think it’s absolutely fair and appropriate.”

It came as Franklin’s former manager Liam Pickering, who brokered the nine-year, $10 million deal to get the superstar to Sydney at the end of 2013, questioned where this week’s leak came from. 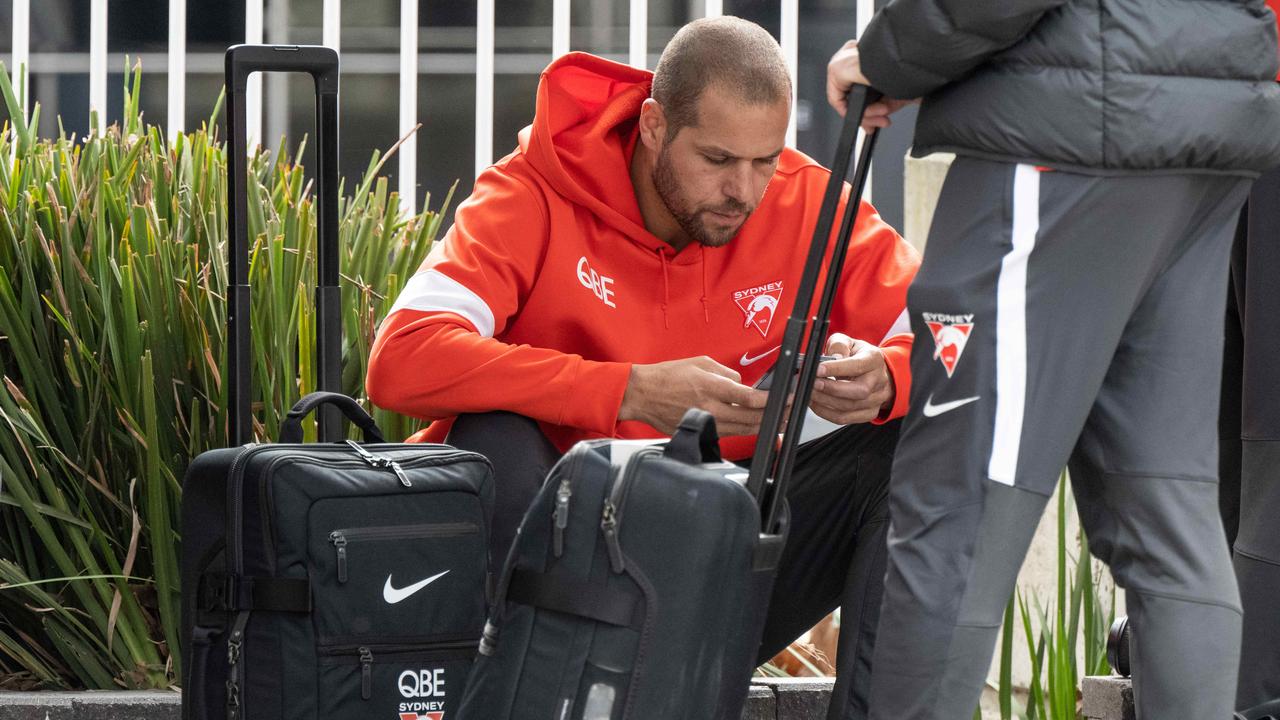 Franklin waits for transport after arriving in Melbourne ahead of their game with North Melbourne on Sunday. Picture: Tony Gough

“I’m very surprised it (contract negotiations) is being run like it is through the media,” Pickering said on SEN.

“I think blind Freddy could join the dots … I’m pretty sure it wouldn’t be (coming through) the Swans or the Lions (as) the Lions said it was news to them.

“I’m taking it (Channel 9 Brisbane journalist Michael Atkinson) he knows someone in the (Franklin) camp.”

Franklin and his wife Jesinta have admitted they have options away from Sydney, with reports in the past week he was keen to move to the Brisbane Lions so the couple could be closer to her family.

Brisbane said it had not made contact with Franklin but the Lions could clearly offer Franklin a one or two-year deal at around $500,000 per season if he wanted to move north.

Lions superstar Lachie Neale said on Saturday he’d love to play with Franklin, although he said it was still a “pipe dream”.

“Clearly he’s done it (put contract talks on hold) for a reason and I think it’s family reasons at the moment that he’s cited,” Neale said. “So we’ll wait and see what he does at the end of the season.” Franklin is in excellent form after kicking 41.21 in his 17 games so far this season but the contract furore will now become a significant distraction for the Swans through the finals.

Franklin and his wife have admitted they have options away from Sydney, with reports he was keen to move to the Brisbane Lions so the couple could be closer to her family.

Brisbane had not made contact with Franklin before the story broke but could clearly offer Franklin a one or two-year deal at around $500,000 if he wanted to move north.

The pause in contract talks will also see rival parties considering whether restricted free agent Franklin would consider moving to them if a deal could be struck.

The Swans will support Franklin whatever his decision and will not collapse without him given they have a trio of young forwards in Logan McDonald, Hayden McLean, Joel Amarty and veteran Sam Reid.

But the Swans had hoped they might have brokered a deal for Franklin by the finals so they could remove the distraction in a year where they believe they can win the premiership.

Sydney will fly into Melbourne on Saturday ahead of their clash against North Melbourne at Marvel Stadium on Sunday, with Franklin’s future now a huge talking point for coach John Longmire.

But with the parties not far away from financial terms, Franklin clearly wants time to assess his options away from the Swans. Jesinta said recently Franklin kept telling her he felt like he was 21 again given his good run with injuries, so retirement would seem like any unlikely option for Franklin.

He has often joked with president Andrew Pridham about his desire for a contract extension so now all options are available for Franklin.

On Friday Lions coach Chris Fagan said the last time he spoke to Franklin was when he congratulated him on his 1000th goal in March.

The Lions also have a tight cap but have $500,000 of space they had allocated for the departing Dan McStay (Collingwood).

“I would have thought if they are moving to Queensland, that that‘s perhaps an indication that Bud’s going to retire from AFL football,” Fagan said.

“If it came to pass down the track that they do move here, and. someone reaches out from his camp and suggests that he still wants to play, then we would be remiss as a footy club not to go and have a conversation with him.

“As far I‘m concerned he’s a Sydney Swans player, and if any of that was going to happen, it would happen when the season’s all over.

“My latest communication with him was a text message I sent to him when he kicked his 1000th (AFL) goal which was four months ago.

“I don‘t know what will play out in the future but the way I see it right now is if he is moving to Queensland to live, I would suggest that he’s going to retire.”