Champion Data: AFL’s average age is the oldest in history and here’s where your team sits

The AFL has become an old man’s league, to a record extent. Champion Data’s JACOB WILSON reveals where each team sits in the delicate balance between age, experience and success. 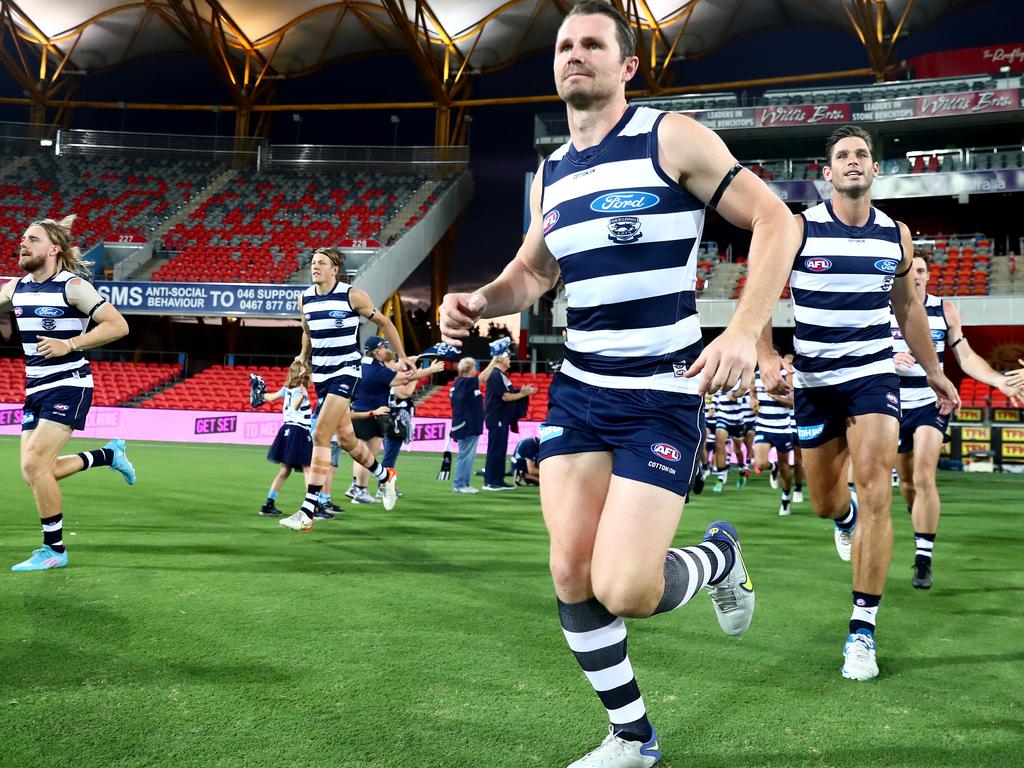 Geelong enter the season with the oldest list in the competition. Picture: Chris Hyde/Getty Images

The AFL is slowly becoming an old man’s competition. The league’s six oldest seasons since 1946 have all come in the last six years. The impacts of Covid-19 on the younger generation have limited their ability to make an impact early in their careers, but this shift towards a more mature drafting and selection criteria was already evident before the pandemic’s outbreak.

The table below shows how the average age of players in the AFL has changed over time. The oldest period in the game’s history came after the conclusion of World War I in the early 1920s, while the mid-1960s was the youngest stretch. Over the past 60 years, the average age has grown over time, culminating in the average age eclipsing 25.5 in each of the last three seasons. 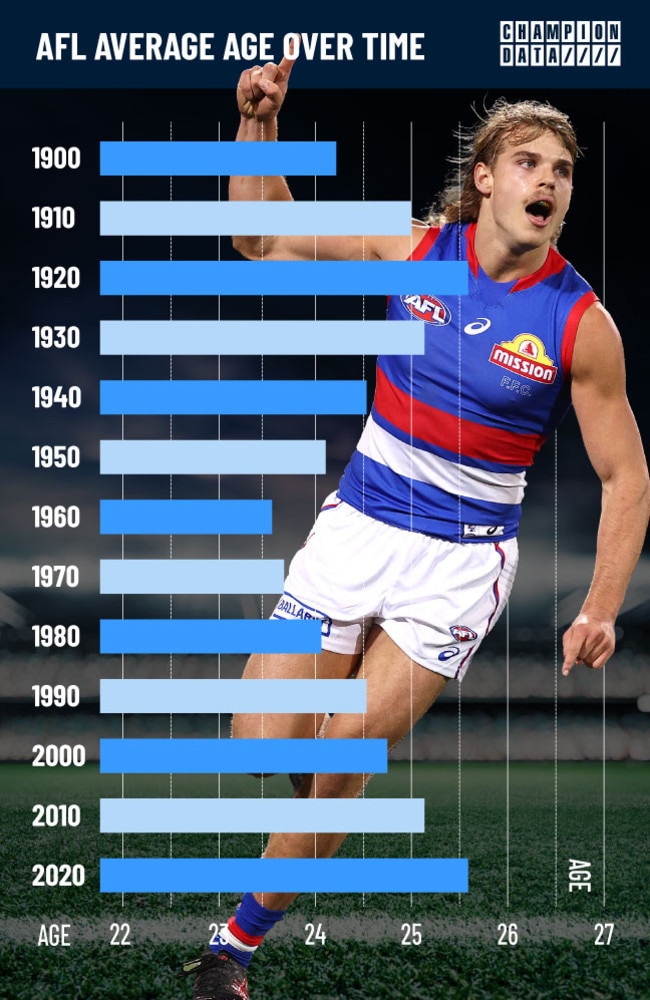 Does age and experience matter?

Across every decade of football, there is a positive correlation between age, experience and success. Looking at the data since 2000, the older team has won 59.4% of matches. Teams older than 27.5 years old have won 67.7% of the time and teams who are on average two years older than their opponents won 71.4% of matches.

Understanding these facts has led clubs to target immediate success by fielding older and more experienced teams. Right now, teams can’t be too old. The data shows we are still yet to find out if there is a tipping point where additional age stops correlating with success. 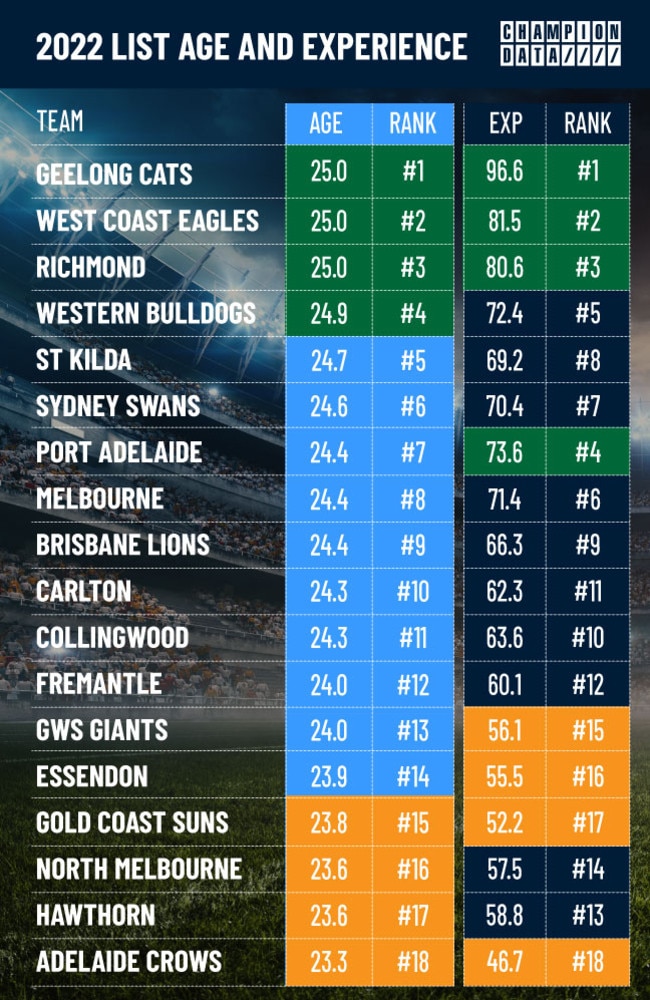 The Saints elected to fill their last few list spots with mature-age depth players, whereas the Lions went for young developing players. The core of the Lions’ 23 players each week is older than the Saints, but the massive difference in age of players 36-44 on their respective lists led to the Lions having a younger list overall. Over the past two seasons, the Cats have fielded the nine-oldest sides ever seen in AFL football with their oldest team coming in round 19, 2020, at an average age of 28.38 years old. The next oldest team fielded excluding Geelong was Hawthorn in round 2, 2020, followed by Richmond in round 15 1923.

It’s no surprise that Geelong will enter the season with the oldest list, 0.3 years older than in 2021. It has 12 players on its list who are at least 30 years old, with another five older than 28. Geelong could easily surpass their own record by fielding the oldest team ever at some stage in 2022.

With all the doom and gloom surrounding the Eagles at the moment, the fact they have the second-oldest and second-most experienced list in the league could be cause for concern as well. By the end of the season, they will have 10 players aged 30 or above, with four players reaching that mark before September. Their youngest player with at least 15 games experience is Jack Petruccelle, who turns 23 in April. 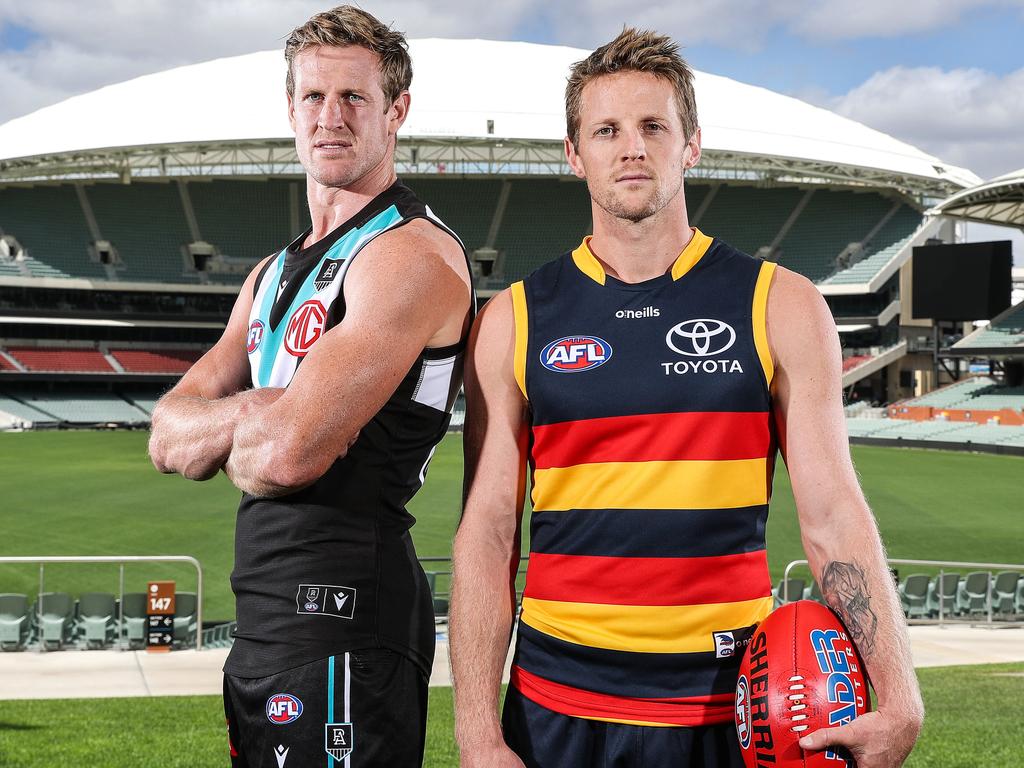 Tom Jonas (Power) and Rory Sloane (Crows). Sloane will lead one of the most inexperienced rosters in the competition. Picture: Sarah Reed/AFL Photos via Getty Images

For the second consecutive season, the Crows begin their campaign with the AFL’s youngest list. They have just six players on their list who are at least 27 years old and of those players, Rory Laird, Taylor Walker and Paul Seedsman are unlikely to play early in the season.

Just two seasons ago, the Hawks set the record for the oldest team fielded in history (a mark now surpassed by Geelong). They now have the second-youngest list in the league and of their 14 oldest players on the list from two seasons ago, only Ben McEvoy, Luke Breust, Liam Shiels, and Jack Gunston remain at the club.