Champion Data: Can the middle-of-the-road thrive if they make the finals? Four teams are racing for the last two spots in the finals.

August in the AFL means endless ladder predictor exercises and mathematical gymnastics of working out which teams in the middle of the ladder can make the final eight.

This year is no different, with recent results casting doubt over teams who were seen as locks, while other dreams were revived.

At this stage it looks like it’s up to the four of Carlton, St Kilda, Richmond and the Western Bulldogs to fill spots seven and eight on the ladder.

We’ll let others dissect the draw to see who makes it, but Champion Data has delved into each team to see if a finals appearance could amount to much anyway. Does any facet of these middle-of-the-road teams suggest they could elevate in September and become a contender if they progress beyond August? 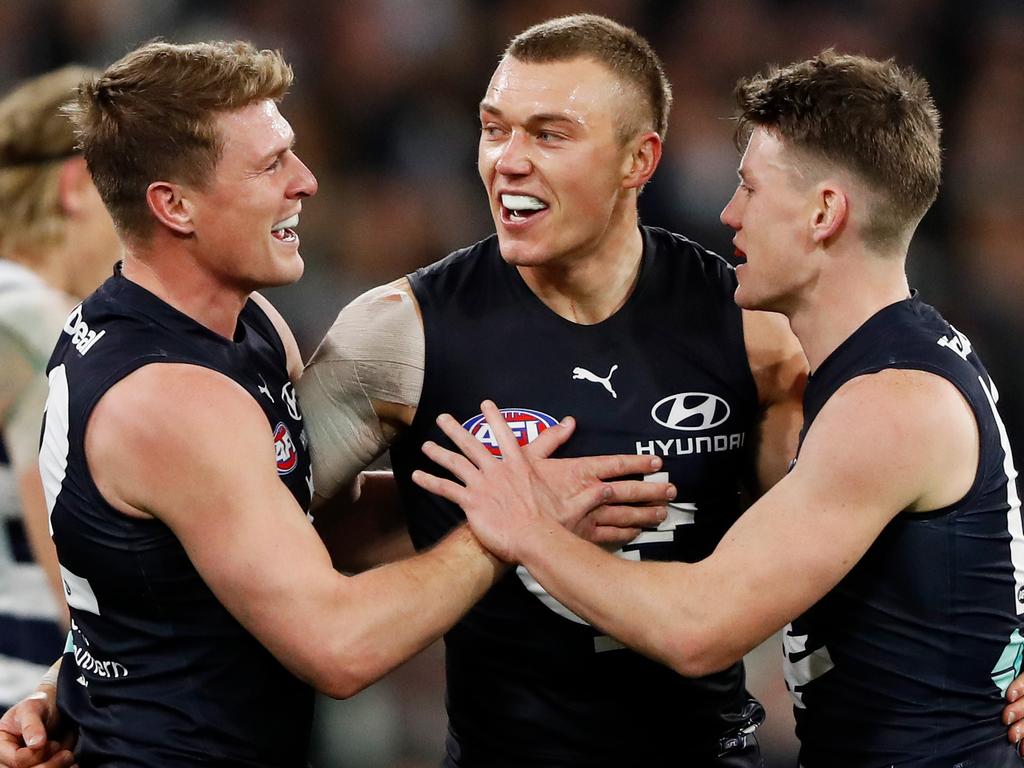 Carlton are now battling to make the final eight, but are they capable of any damage if they make it? Picture: Dylan Burns/AFL Photos via Getty Images

Even Carlton haters were excited watching the Blues in the first half of the season but injury and the season grind has taken its toll. Every week another soldier seems to go down.

A loss to the Crows last week now puts everything on edge with three tough games to go.

The positive for Carlton is through 2022 they’ve held the line as the best or second-best team at getting the ball. Forget anything too scientific, contested possession and clearances work in September. Last year’s grand final seesawed on it. While Carlton's momentum has slowed, they remain among the best ball-winning teams in the AFL.

Despite losses, since their mid-season bye the Blues have maintained the rage for most of those figures. It’s been their efficiency going into the forward line (ranked 17th for goals per entry) that has dropped off.

Their backline has stayed stingy though. Only 19.1 per cent of opposition entries have resulted in a goal since the bye, the best rate in the league. So there’s hope on these numbers that they could scare a second week of finals opponent, but their game seems primed to go deeper from 2023 onwards.

Champion Data deals in the numbers, so it‘s neither half-full or half-empty, it’s just half. This is the Saints’ problem.

Looking at some of the major statistical indicators of success, St Kilda are exactly where you’d expect them to be; middle of the road. Champion Data's statistics for St Kilda this year are consistent with a middle-of-the-road side.

They’re competent and competitive in most categories which is an achievement in itself but there is no jack-in-the-box figure that shapes as a trump card to spook the contenders in a September run.

This is precisely the reason the talk of Jordan De Goey to St Kilda does not go away. Champion Data says the Saints have got a nice cake, they just need some icing.

All year pundits have been searching for the re-emergence of the Premiership Tiger. They’ve been seduced by glimpses and wanted to believe, only to be disappointed. At halftime on Sunday the last rites for 2022 were being administered before their storming comeback again teased. If they could do this every week …?

Compared to their 2020 premiership season, 2022 looks comparable. The trademarks of 2020 (and for that matter 2017, 2018 and 2019) are still in place; territory, intercept and scoring. The Tigers are among the best in the league in those categories, the place they have slipped is defence. The continuing injury woes of Dylan Grimes has helped push that part of their game into the middle of the pack. Richmond's numbers in 2022 look similar to the their premiership year in 2020.

Inconsistency has plagued the Tigers this season, so while the data shows the tools are there for a September it has to be perfect from here.

The Bulldogs are the exception to the rule that the bottom half of the eight is making up the numbers, having stunned the AFL in 2016 with the most unlikely of flags from seventh and then reaching the 2021 Grand Final from fifth.

While there has been doom and gloom, things look similar to 2021 in 2022. Their contest, clearance and territory profile is almost identical so it’s entirely possible another run could occur. Their second half against Melbourne and their first quarter against Geelong over the past fortnight is evidence that this stuff still works against the best. The Bulldogs’ defence has slipped but their contested and clearance work is consistent with 2021.

But for all of their ability to win the ball, an inability to defend was their Achilles heel at the death last season. Things have slipped since then.

From the third most miserly defence in the AFL in 2021, they are now 12th, conceding 84 points per game rather than 69.2. The points from intercept differential has also slipped significantly from +14.2 in 2021 to -1.8 in 2022, second in the AFL to 12th. It’s another sign of problems defending in transition.

The firepower and the coach who’s conjured it before remain, but the task looks tougher in 2022 if they sneak in.

The most likely contender of the pretenders? Shai Bolton and the Tigers are teasing with premiership-calibre patches of play. Picture: Michael Willson/AFL Photos via Getty Images

Nobody can suggest a Dusty-less Richmond can match their own 2020 version, but Champion Data figures suggest it’s Richmond that has the 2022 profile that could elevate itself from middle of the pack pretenders. 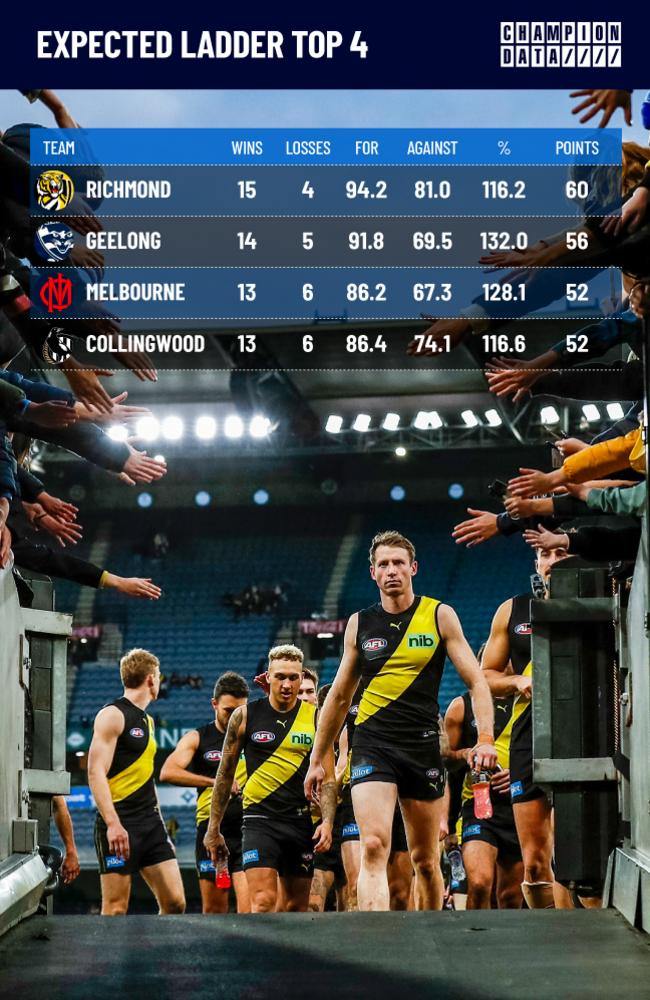 But their game continues to tantalise, and Champion Data sees them as the most realistic premiership threat among those who are yet to book a trip to September.

If they make it.