Craig McRae is adamant that he still doesn’t know where Collingwood sit in the grand scheme of the AFL in 2022. But Isaac Quaynor says “the sky is the limit.” He talks to DANIEL CHERNY. Isaac Quaynor, Nick Daicos and John Noble were sitting in the spa ahead of Monday’s Queen’s Birthday game. It stands to reason that most people would feel better about the world inside heavily heated water during the depths of what is promising to be a miserably chilly Melbourne winter, but the chat between the trio of Collingwood defenders was particularly upbeat.

This group of Pies believed there was no real reason why their side wouldn’t beat Melbourne on the public holiday. They had defeated Fremantle and Carlton in recent weeks, downed St Kilda earlier in the season and had run the Brisbane Lions and Geelong close.

Very little from thus far in the season pointed to Collingwood not being a good side, if not considerably better than that. That Melbourne came into the game on the back of consecutive losses, without star defender Steven May and having dealt with a week of scandalous headlines hardly hurt the cause either. “We were just saying we genuinely have confidence that we can beat anyone,” Quaynor said post-match of the spa chat before the game.

“We really, truly feel that. It’s not fake confidence, it’s genuine belief, which is so powerful.

“It’s so exciting. We’ve put a lot of work in in the off-season, we’re really starting to buy into the brand that we’re building. It’s getting results.

“We’re starting to get on a bit of a roll. We’ve just beaten the best team in the comp pretty comfortably in the end, so we’re all super stoked. And I think the whole Magpie Army is just as excited as we are, which is great.”

Just how far Collingwood can go in 2022 is an intriguing question. The Magpies, having finished a record-low 17th in 2021, are in the top eight heading into the bye, having beaten the sides in second, third, fourth and sixth. That’s a compelling case that the Pies are a finals outfit. But coach Craig McRae, asked for several weeks how far Collingwood can go, continues to stress that he doesn’t quite know yet. 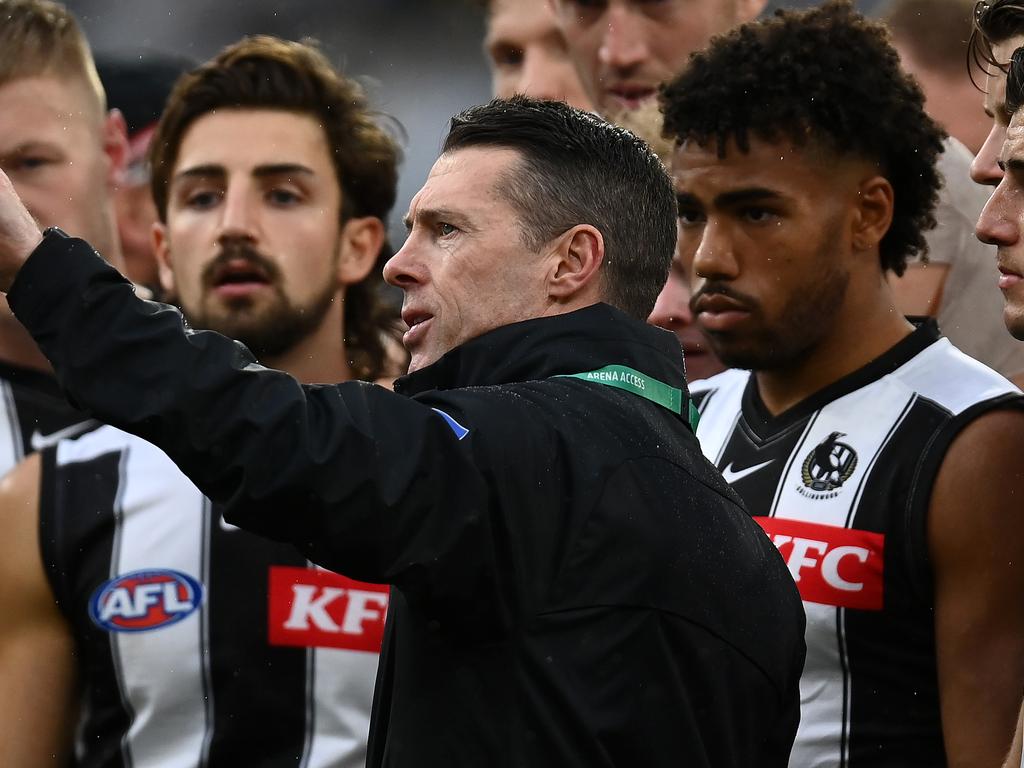 “We’re just trying to grow,” McRae said. “We’re not a finished product. We just want to live in the moment for now.

“We had no idea where we’re going to sit in the big scheme of things, we still don’t. It’s a pretty long season.

“You look at our list profile. When all our magnets are on the board you think, ‘Oh that’s going to be a really competitive team.’ But it doesn’t take too many to go away … to stretch the team a little bit more.”

So if McRae is going to understandably defer to coach-speak and generalities, let’s allow Quaynor to do the dreaming instead. No overt mentions of the “f” or “p” words, but in as many words hinting that he thinks the Pies can do anything this year.

“We’re eighth now, so we’re starting to get to that position where we can really start fighting for [the finals]. The sky’s the limit,” Quaynor says.

McRae has banged on about how he didn’t really know what he had at his disposal heading into his first year in the job. Isaac Quaynor of the Magpies kicks the ball during the 2022 AFL Round 13 match between the Collingwood and Melbourne. Picture: Michael Willson/AFL Photos via Getty Images

“With change comes a bit of that unknown,” says the fourth-season backman. “It’s almost hard to fully invest in something that you haven’t seen evidence of. Now we’re however many rounds in, we’ve had plenty of opportunity to see what works and what doesn’t. I think we’re really starting to find what does work for us.”

Having said all that, it was only a month or so ago that the Pies’ season looked to have hit the skids. After early optimism they’d slumped to 4-5, thrashed on a Friday night by the Western Bulldogs to the tune of 48 points. What has changed since then?

“We’ve come back to the skeleton of our game plan. The No. 1 thing you’ll see from us is pressure. It’s what we do best, it’s what we’ve built our game on. We’ve just gone back to that, and everything’s just worked on the back of that. It’s exciting from there. Once we get the important things right we can build off the back of that.

“It was just the realisation we had after that week that we’d tried to complicate things a little bit too much. I think with a young group, and a new group coming together with new coaches, you’ve got to keep things pretty simple. When we do that, we play our best footy.”

With his boundless run, Quaynor continues to progress as a player, establishing himself as a regular under both Nathan Buckley and McRae. He did have one particularly regrettable moment on Monday, though, coughing up a handball straight to Ben Brown deep in defence which gifted the Dees’ spearhead a goal and helped Melbourne kick clear.

Tensions rise after Ben Brown slots his second of the day.#AFLPiesDeespic.twitter.com/IZsLktSyyJ

He could see the lighter side of it in the rooms after the match. It’s always easier after a win.

Murphy’s lore: How Pie fell back in love with footy

But what was he thinking at the time?

“That I’m an idiot. They’re the moments you just want to bury yourself in the dirt. It was just a blatant mistake. Darcy [Moore] was there, and then Ben Brown popped up. I just handballed it straight to Ben Brown. Frustrating stuff but you live and you learn.” 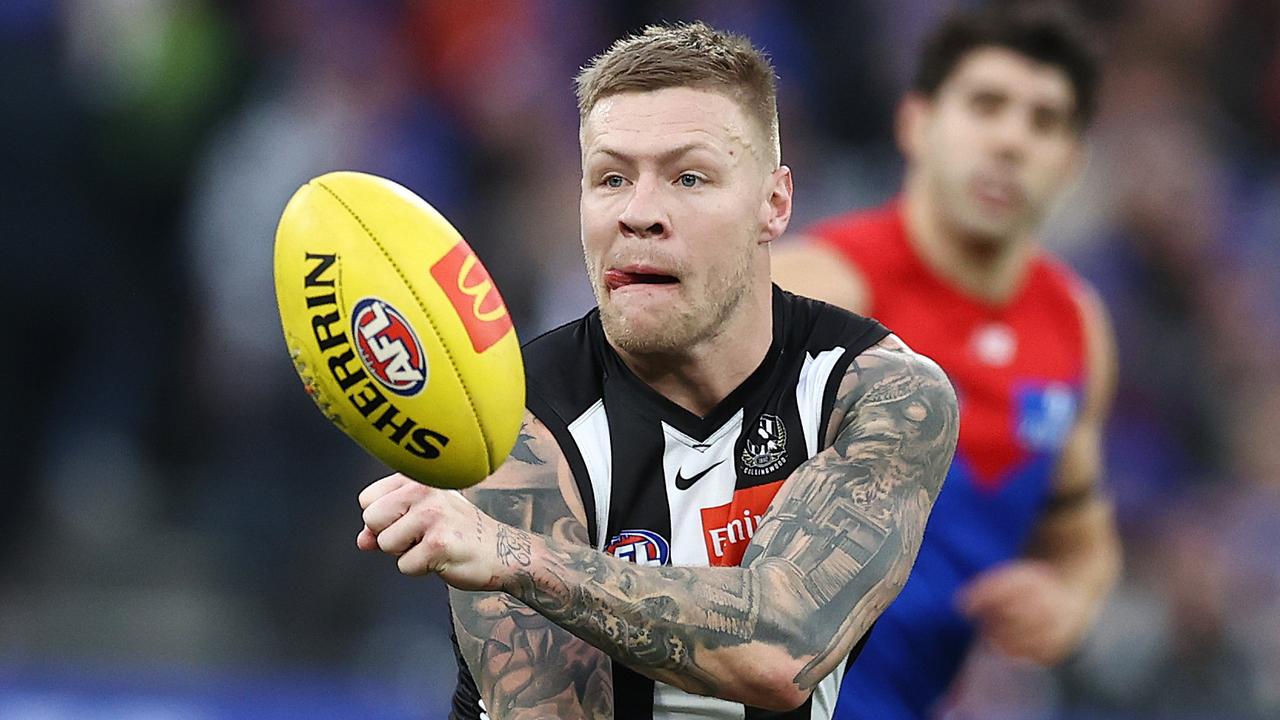 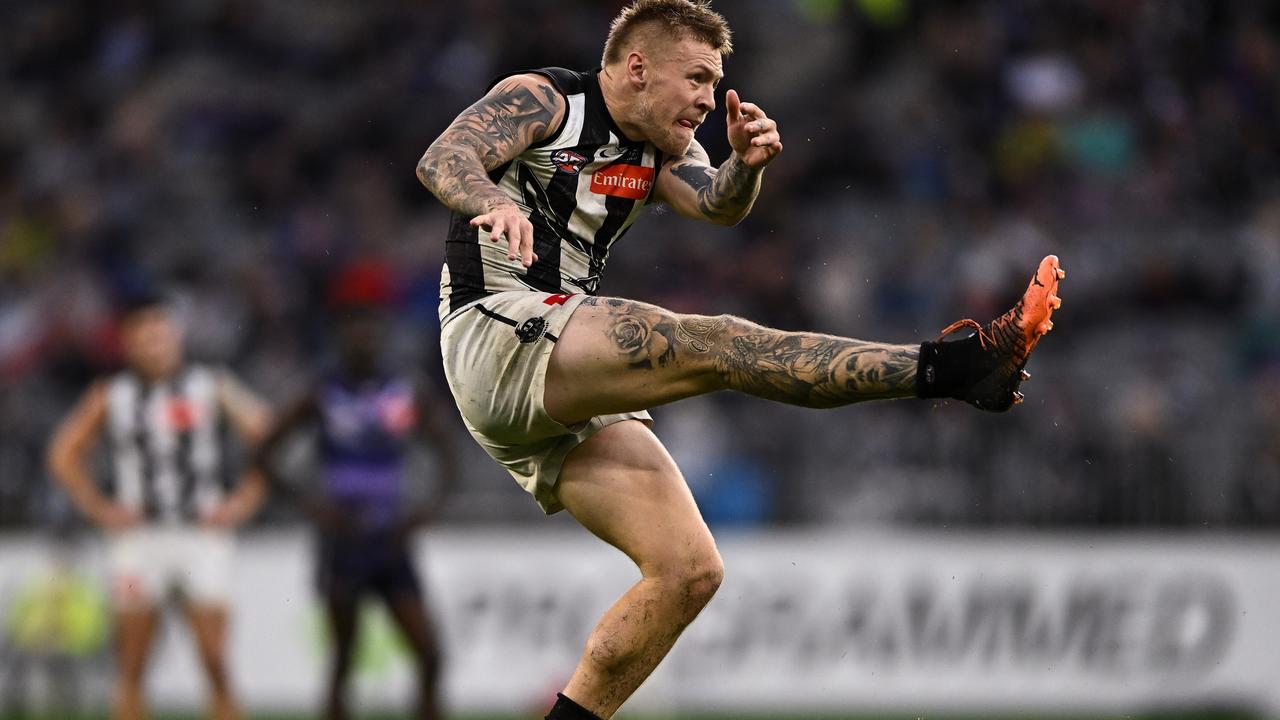