The name Kevin Sheedy goes hand-in-hand with the Essendon Football Club. In celebrating the club’s 150th, the Bombers have made the legendary coach their first Immortal.

Essendon has paid its greatest servant, Kevin Sheedy, the ultimate honour by making him an immortal of the club.

The unprecedented move was announced at the Bombers‘ 150 year anniversary celebration on Saturday night by president Paul Brasher.

Sheedy was already recognised as a Legend of Essendon as well as being elevated to Legend status in the AFL Hall of Fame in 2018.

He coached the Bombers for 27 years, playing in 19 finals series which included seven Grand Final appearances and four premierships. Joining Brasher in presenting the honour to Sheedy were three of his favourite players — Terry Daniher, Adam Ramanauskas and Gavin Wanganeen.

“Kevin’s passion, dedication, determined and pride in expanding Essendon from a suburban to truly national sporting organisation has helped ensure the Essendon Football Club will remain a pre-eminent club long into the future,” Brasher said.

“We particularly acknowledge Kevin’s contribution in winning four VFL/AFL premierships as a coach, as well as his significant role in establishing annual marquee matches including ANZAC Day, Dreamtime and the Country Festival games.

“Importantly too, we recognise the influential role Kevin has had, and continues to, in developing and nurturing players of all backgrounds and cultures in his four decades of involvement at the Essendon Football Club.” Sheedy, who coached the GWS Giants in their first two years, returned to the Essendon board in 2020 and is currently part of a wide-ranging review of the club‘s football operations after a horror first half of the season.

In 2019 he added to his long list of achievements by becoming an Officer of the order of Australia for distinguished service to football.

Sheedy was a three-time premiership player and captain at Richmond, playing 251 games between 1967-79.

Sheedy pulled off one of the great premiership wins with his ‘Baby Bombers’ in 1993 before steering one of the best teams in history to a dominant flag victory in 2000. James Hird emerged from a puff of smoke like a genie in a bottle.

Essendon’s poignant celebration on the MCG captured the essence of its 150 mostly-glorious years.

Sadly, the magic is gone.

For long-suffering supporters perhaps the pre-game euphoria felt like watching their wedding video before another session of marriage counselling.

The reception for Hird reaffirmed they are still madly in love with their ex-coach, even if he’s walking down football aisles in a Greater Western Sydney polo these days. James Hird emerges from a puff of smoke at the MCG. Picture: AFL Photos/Getty Images 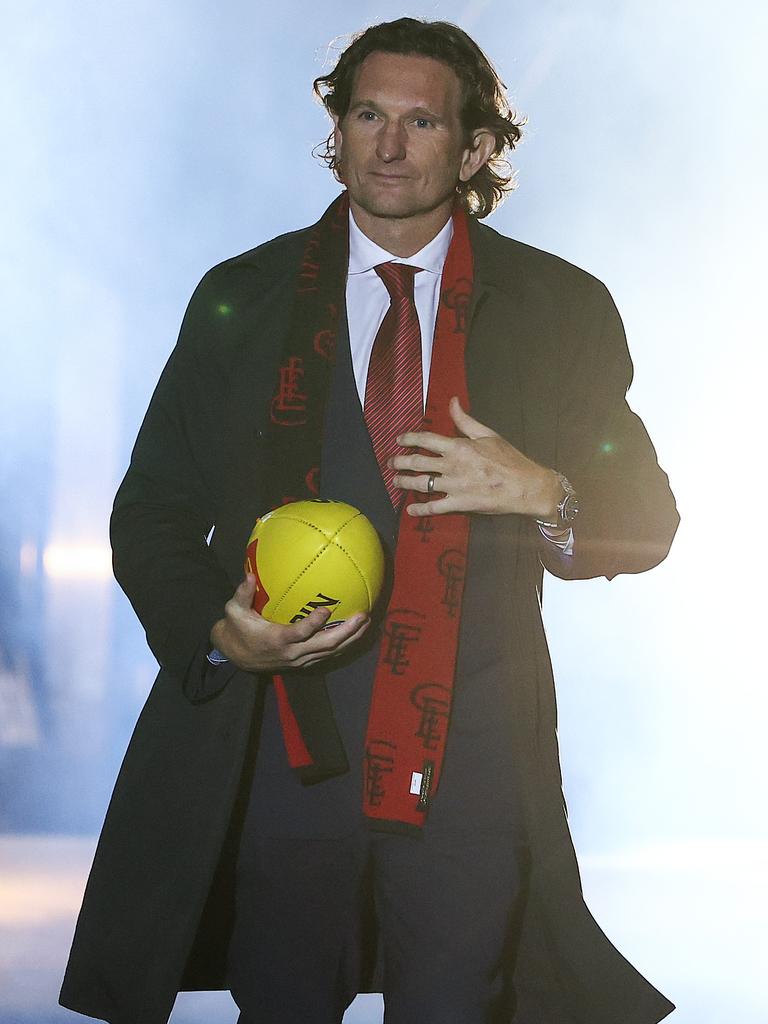 Hird was back at Essendon to celebrate the club’s 150th. Picture: Michael Klein

Supporters must have gone home from the club’s 150th birthday party privately wondering if their football fairytale could ever come true again.

Heppell’s impassioned words were delivered not only to his teammates but the likes of James Hird, Dustin Fletcher, Kevin Sheedy, Tim Watson, Matthew Lloyd and Gavin Wanganeen.

The Bomber titans were introduced one by one, with Hird drawing the biggest and best reception in clear evidence of how popular he remains with the club’s faithful. Essendon captain Dyson Heppell fires up the past and present players before the match. Picture: Getty Images

It might be fanciful – Bombers powerbrokers are adamant coach Ben Rutten’s position is not on the line – and the fans couldn’t have been too heartbroken at halftime anyway.

The Bombers laid 75 tackles and recorded a pressure rating above the AFL average. Blue Adam Cerra (hamstring) was off early and the Bombers were on.

Yes, the effort at stoppages was solid. But away from that it was harder to source.

They appeared disorganised behind the ball and their midfield defending in transition was, well, terrible.

Effort without system only gets you so far and the Bombers are the easiest team in the AFL to move the ball against, with Carlton’s conversation rate from defensive 50m to inside 50m a staggering 53 per cent in the first half.

It was the Blues’ best first half for the year, towering above the AFL average of 21 per cent, and they booted 27 points from their back half. The Bombers hit back through the likes of young gun Harrison Jones. Picture: Getty Images

Jack Martin marking 40m from goal all on his own to kick the first goal showed how plenty of that waltzing transition came without pressure.

In the second half the Bombers started to stifle the surge and a scrap emerged. They kicked the ball inside 50m 22 times and failed to mark any of them.

They won the final quarter four behinds to two, but Rutten’s forward line has recently become rudderless and so it never threatened to pull off a famous victory worthy of this rivalry. 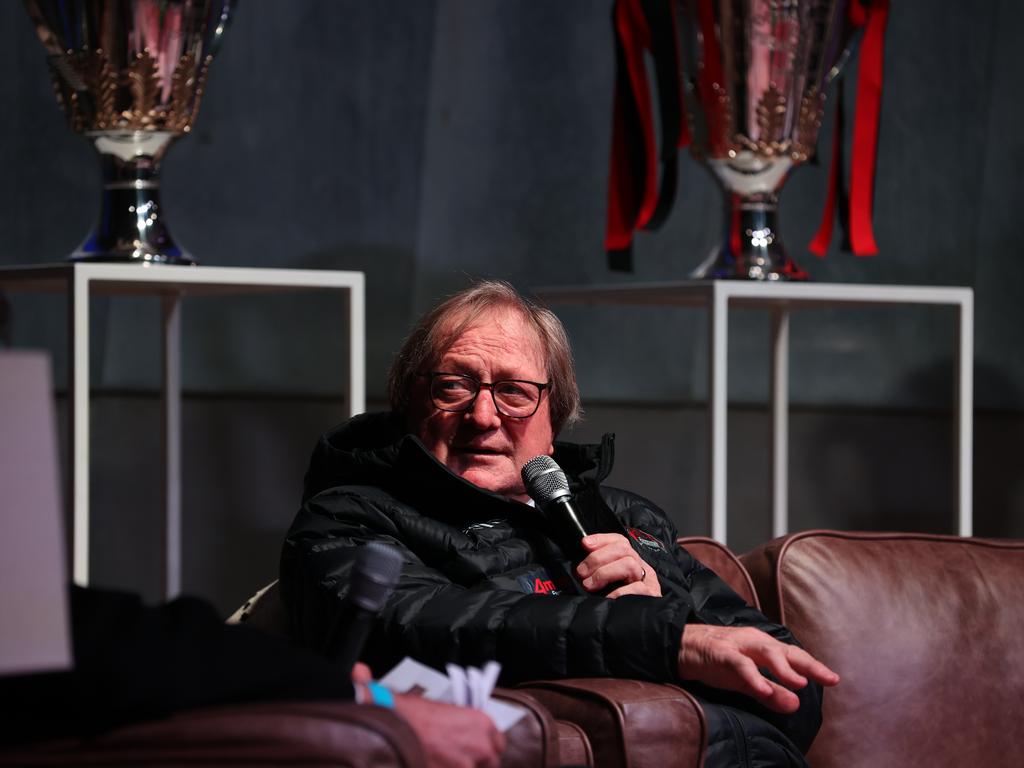 Young defender Zach Reid has now played on Tom Lynch (Richmond) and Harry McKay in a month while putting Jones next to Peter Wright, who ran 15.2km, means the Bombers should kick forward with confidence.

The Blues might boast matchwinners the Bombers can only dream of in Sam Walsh (29 disposals), Patrick Cripps (eight clearances) and twin towers Harry McKay and Charlie Curnow

The club argues that Will Snelling and Kyle Langford are significant structural losses and president Paul Brasher promised improvement in the pre-game function. A family of Bombers in Fed Square. Picture: Jason Edwards

Brasher pointed to the “clear improvement” in key performance indicators in losses against Richmond and Port Adelaide and declared there was more to come.

Dual premiership star Darren Bewick then used that same function to echo Kevin Sheedy’s words in the Herald Sun that every game was like “going to war”.

“You have to go to war when you’re playing against a good side like Carlton,” Bewick said.

“And I think this team needs to realise that they’re going to war every weekend. They’re representing a lot of people who are really passionate about what they’re doing out on the field.

“I hope they see that and understand that.

“There’s a lot of talk – but it’s time for action. Honestly, people are getting pissed off with words.”

Baggers forced to use early sub after Heppell’s Dons rousing

There was no white flag raised on Friday night. But this one felt closer to a fracas.

Is Rutten ready to wage war?