AFL 2022: Shaun Burgoyne upset and disappointed he was not informed of Bali racial incident

Hawthorn legend Shaun Burgoyne says he feels frustrated that a racial incident on off-season trip to Bali in 2013 was not made known to him until it surfaced this week.

The Hawthorn indigenous player at the centre of the 2013 racial incident on a Bali end-of-season football trip considers the matter resolved despite the Hawks’ pledge to investigate its previous conduct.

But Hawthorn legend Shaun Burgoyne is disappointed he was never told about the incident in which a senior player asked if the indigenous player’s wife was also a “boong”.

Both the player who made the comment and the indigenous player are still in the AFL industry, with another senior player working through the allegation with both parties while still on the trip. Shaun Burgoyne and Cyril Rioli celebrate a goal during the first preliminary final against Geelong in 2013. Picture: Getty Images

Hawthorn would not confirm this week if that incident would be a key part of its pledge to investigate past incidents to “determine if any other action needs to be taken”.

Regardless, the Hawks must ensure he is satisfied by the resolution of the incident given it was not escalated to the club leadership group or the football department.

The player was hurt and upset by the comment but accepted an apology from his senior teammate and was surprised the allegation was unearthed by Rioli this week.

Yet as four-time premiership star Burgoyne said on Thursday night, ideally the incident would have been properly resolved with club input including the leadership group.

“It surprised me this week when I read that in the article,” Burgoyne said on Seven.

“I had no knowledge of an incident and no knowledge until I read it actually in the paper, which makes me a little bit angry and a bit frustrated because if I would’ve known something would’ve been done about it then and there. Burgoyne and Rioli with the 2015 premiership cup. Picture: Wayne Ludbey

“But I didn’t, and I found out this week, which was very surprising.”

“I think it was a footy trip in Bali, I didn’t go on it, I wasn’t there. I am not sure of the details of it. It is no excuse for that behaviour, but the players talked through it and they seemed to have settled it there and then, but things of that magnitude and importance need to come back to the club and be dealt with in the right way and the players involved are probably learning that now.”

The Hawk have not promised a top-to-bottom review but are discussing their response with the AFL’s general manager of inclusion and social policy.

Hawks president Jeff Kennett said the club’s response would be measured and responsible.

“We have taken those claims seriously and are conducting further inquiries to see if there might have been other incidents affecting our past First Nations players,” he said this week.

“Once those inquiries have concluded, we will determine if any other action needs to be taken.

“I can assure you that the board and the administration will not shirk our responsibility to work through these matters.”

Hawthorn premiership midfielder Jordan Lewis says he’s spent the past few days wondering if there was anything more he could have done to help former teammate Cyril Rioli.

Lewis revealed he was central to an incident in 2013 which Rioli raised as an example of the problems at Hawthorn when during an off-season trip a senior player asked teammates whether the partner of one of his Indigenous teammates was “also a boong”.

The Indigenous player was at the table at the time.

“That is the incident I reflect on the most to see if we could have done anything,” Lewis told AFL360.

“Once it had happened and the player was clearly upset with what had happened, a senior player and me, made sure he was our absolute priority over the coming days.

“What we felt after speaking to that player was, after the initial night and then the subsequent following days, that he was OK, he was accepting of the apology.

“It was a sincere apology and nothing was ever spoken in the years to come, even speaking to the player nine or 10 years on, he never had a second thought about that night.”

Lewis said the players decided not to report the matter to management.

“We were really guided by the player, if he thought it needed to go further absolutely we were there for him, that was our role as a friend and a leadership group to take whatever issues that player had,” he said.

“But countless questions and countless conversations, we had and we still have a really good relationship with this player … we would expect and think that he would be upfront and honest if he was feeling that way.” 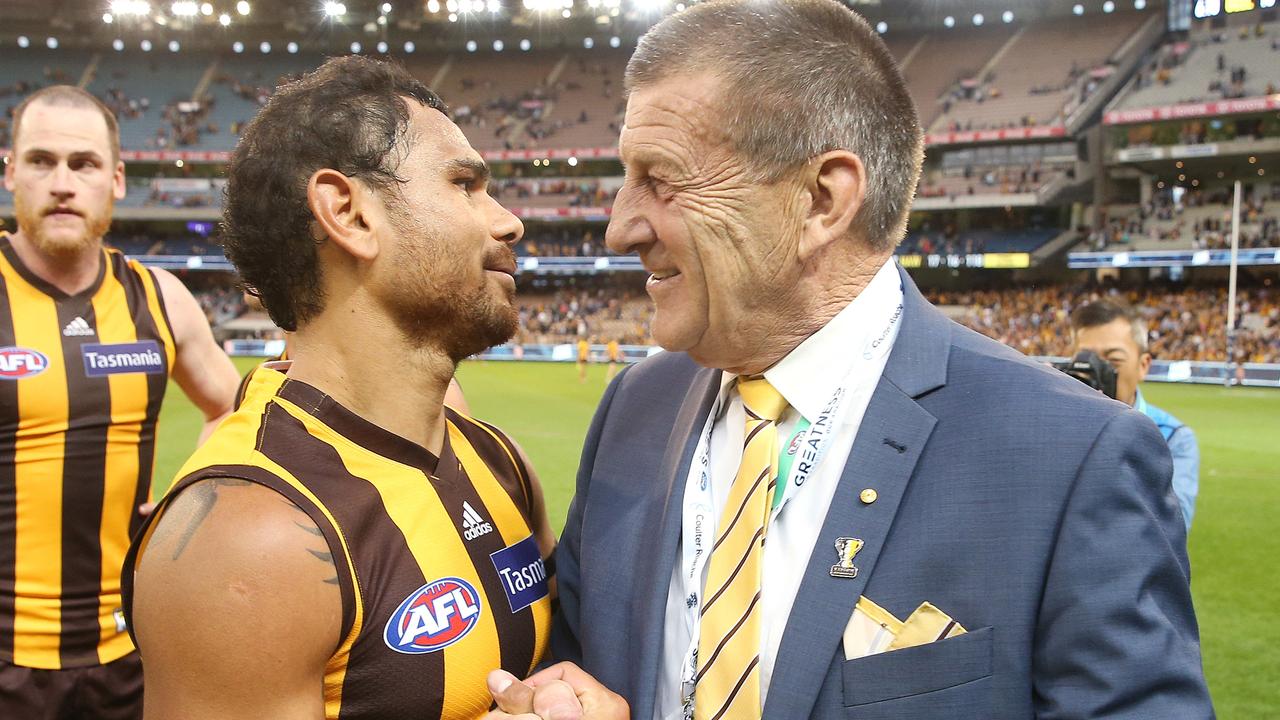 Jeff Kennett and Cyril Rioli after a win in 2018.

Former Adelaide and Carlton great Eddie Betts revealed on AFL360 he’d been too scared to speak out about racism for most of his career.

“I found my voice at 28,” Betts said. “I had been racially abused my whole career and I was too scared to speak.

“Cyril retired at 28, it’s great that they called it out, but I wish he stayed longer and stood up. It’s sad to see Cyril retire because of this racism.”

It comes as Jeff Kennett broke his silence over the Rioli affair saying the Hawthorn board would hold an investigation into claims of racism at the club.

The Hawks president didn’t address his own role in the saga in a letter to members on the club’s website.

Rioli says it was some grossly insensitive comments made to his wife by Kennett about her designer ripped jeans in 2018 which was the final straw and saw him walk away from football.

After discussing Hawthorn’s stunning comeback against Carlton on Sunday in the opening half of the letter, Kennett then revealed the board was looking “seriously” into Rioli’s claims. Jordan Lewis has weighed in on the Cyril Rioli saga at Hawthorn.

“We were all saddened by the story that there had been incidents that had upset both he and his wife,” Kennett said.

“We have taken those claims seriously and are conducting further inquiries to see if there might have been other incidents affecting our past First Nations players.

“Once those inquiries have concluded, we will determine if any other action needs to be taken. I can assure you that the board and the administration will not shirk our responsibility to work through these matters.

“Some will demand immediate answers and actions, but, given how important these matters are, the best response is a measured and responsible one.

“We will firstly seek to establish the facts, before working through the best way of responding to the matters that require addressing.

“Matters have been brought to our attention. We are taking them seriously, and any failings will be addressed.”

Kennett ended the letter by saying he hoped Rioli, a four-time premiership hero with the Hawks, would return to the club.

“Can I finally say on this matter: we all want Cyril back with us at Hawthorn,” he said. “I hope that we can work through the hurt he feels and make him feel welcome and safe in the brown and gold family again.”

Hawthorn triple premiership captain Luke Hodge has revealed the club’s leadership group never formally discussed a racist comment made by a player about the partner of an Indigenous Hawk on an end-of-season trip in 2013.

Hodge said he had been unaware of the incident at the time but had since spoken to the two players involved – and a senior player who oversaw an apology made at the time.

The incident was one of several that Cyril Rioli and his wife Shannyn Ah Sam-Rioli documented that led to the Hawthorn star retiring prematurely from the game in 2018.

Hodge said on Wednesday he felt saddened that Rioli’s wonderful career at the club had been impacted in the manner that it had, saying he wished he and the club leaders had asked more questions about his welfare at the time.

“I was most shocked (with the) 2013 story about what was (allegedly) taken to the leadership group and what was said back to the players,” Hodge said on SEN. “That was very concerning. I was sitting there as captain at the time and hadn’t heard that story.

Hodge said he had spoken to the two players involved in the 2013 incident, while has also tried to contact Rioli in recent days without success.

“I have tried to touch base with Cyril to find out more details of that, but haven’t been able to get hold of him,” he said.

“But as far as the incident that happened in 2013, I had spoken to the two players and the senior person who were involved there.

“The young Indigenous person who was hurt by the comments said that he accepted the heartfelt apology (by the player who made the remark) and he sort of moved on and they have been mates ever since.” Luke Hodge says he was unaware of the comment raised by Cyril Rioli. Picture: George Salpigtidis

Hodge said he was deeply saddened by reports that Rioli – with whom he played in four AFL premierships – had been driven into early AFL retirement because he didn’t feel comfortable or supported at the club.

“The main thing we need to get to is showing Cyril that we still want to support him and moving forward (ensure) there are better ways we can support teammates and Indigenous teammates,” he said.

“When Cyril makes that decision (to return to Hawthorn) I know there are going to be so many of his teammates who will want to go and wrap their arms around him.

“What we have found out over the years is don’t just assume that you are showing the right support to people. You have to probe with questions and ask detailed questions to find out how they are really feeling.

“If we get that opportunity with Cyril to sit back and talk and hopefully celebrate the premierships we won together, the conversations will be had and find out how we could have handled things better and hopefully in the future, you don’t go through those mistakes again.”

Originally published as AFL 2022: Shaun Burgoyne upset and disappointed he was not informed of Bali racial incident 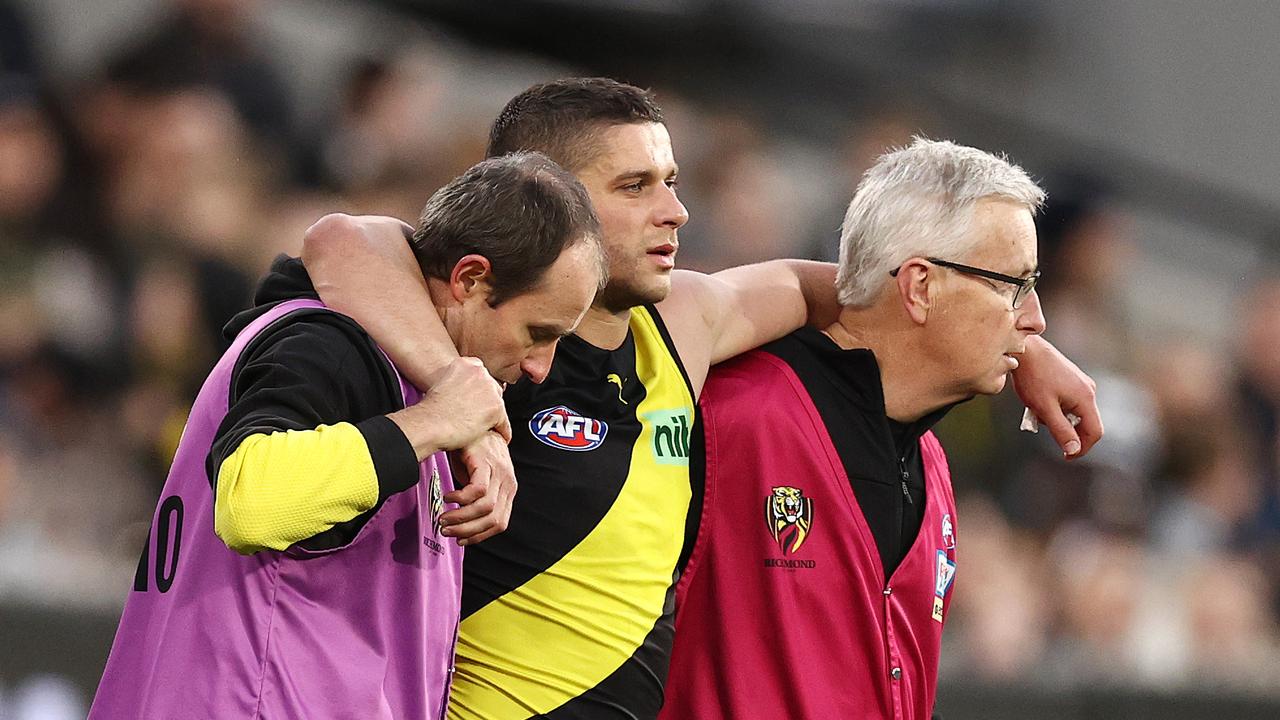