Back in 2014, Damien Hardwick and Max Gawn kept crossing paths. One meeting came at Gawn’s local club, at which Hardwick also had ties. Max Gawn led Melbourne to a historic premiership this season but earlier in his career, Richmond came calling for the champion ruckman.

If Damien Hardwick had his way, McKinnon Secondary College could have been the scene for one of the AFL’s great recruiting heists of the 21st century.

It was 2014. Max Gawn was an emerging but still unproven ruckman. He had endured two knee reconstructions and was not yet a senior regular at struggling Melbourne.

But the signs of the talent that would eventually propel him to superstardom were there. Hardwick, still years away from even winning a final with Richmond, let alone becoming a three-time premiership coach, had been on the wrong end of one of Gawn’s best games to date, as the Dees – in Paul Roos’ first season – knocked off the Tigers, days after the death of legendary coach Tom Hafey.

Hardwick and Gawn kept crossing paths. One meeting came at Gawn’s local club, at which Hardwick also had ties. Gawn coached under 16s and under 17s at his local club, Ormond, where Damien Hardwick tried to give him the hard sell on Richmond in 2014. Picture: Supplied

“I remember I played against Richmond, I felt comfortable at the level, I played quite well, took a few marks.

“And I saw Dimma at Ormond, because his son played at Ormond.

“He was going crazy. He was saying, ‘You were unbelievable [against us], we need someone like you’. Then I saw him again at my high school. We were both keynote speakers for our high school at McKinnon High. And he kept on saying in front of the whole group, ‘If we had someone like Max’. He kept on making it quite loud.”

Gawn had been a Richmond supporter as a child. How history might have turned if the Tigers had landed the best ruckman of his generation, poaching him from the club to which he would ultimately become a premiership captain.

“My manager did tell me at some point that Richmond were showing interest. But I [had] signed [with Melbourne] way before.”

Gawn had been keen enough to remain at the Dees. It would take until midway through the following season, 2015, for the game that would forever change his career trajectory, a dominant display in Geelong, ruining Corey Enright’s 300th game. Gawn had an absolute belter against Geelong in 2015, a game considered one of the most important in defining his young career. Picture: AAP Image/Julian Smith

That was six and a half years ago. While Tiger fans would soon be gifted all they had dreamt of, and more, Gawn has since made five All-Australian teams.

And then, in September, came immortality. Skipper of Melbourne’s drought-ending side, his legacy is entrenched.

And yet, Gawn says, the moment in which the magnitude of the achievement was supposed to “sink in,” slipped by him.

The circumstances of winning a premiership in Perth while the heartland was in lockdown doubtless contributed.

“It’s been grim in Melbourne. Now we’re finally out, but it almost seems scary again, because there’s people getting the virus left, right and centre.”

And with new Demons high-performance chief Selwyn Griffith determined to make an impression, the Dees have already been back running for a few weeks.

That’s not to say there haven’t been moments where the significance of the premiership, at least on a personal front, hasn’t been apparent. 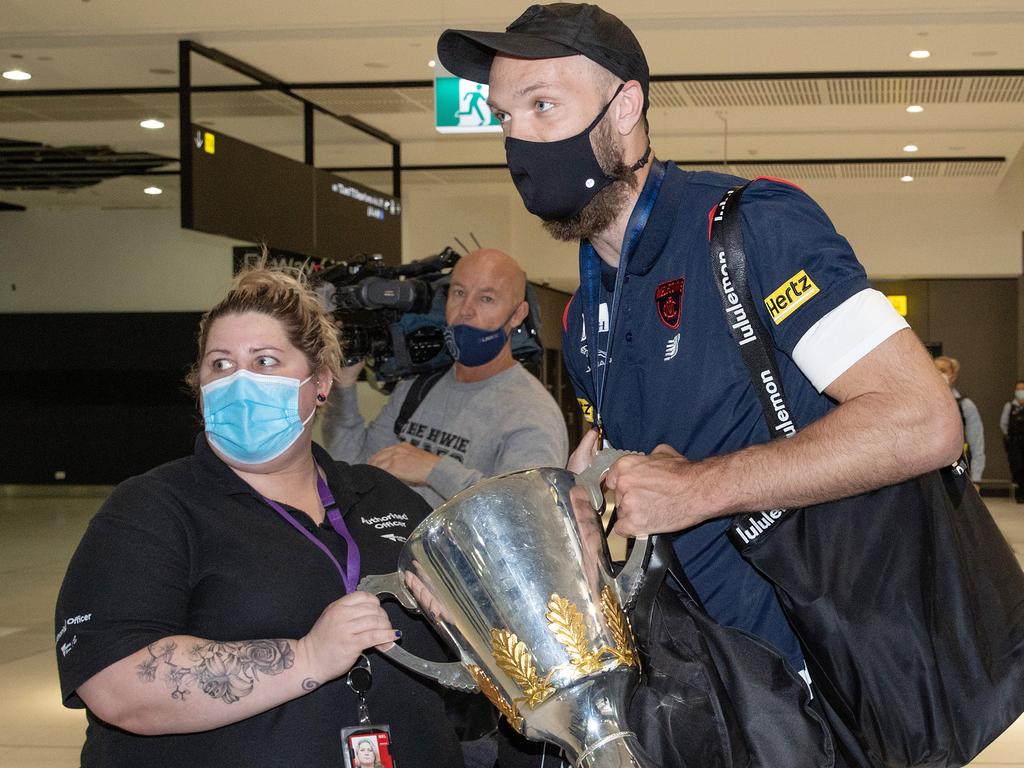 Gawn and the Demons have been met with pure adoration from fans since they touched down back in Melbourne in September. Picture: Mark Stewart

Walking around his neighbourhood on the Mornington Peninsula, Gawn has been thanked by Melbourne fans who thought they would never live to see the day. Bringing the cup to former president Don McLardy and long-time Dees director David Thurin was special. And that emotion will be amplified when Dees supporters greet their heroes, and silverware, back at the MCG early next month.

“You have made a lot of people happy,” Gawn said.

“To bring a smile to their face brings a smile to my face. But I am hanging out for this December 5 function.”

There has been another reason why Gawn hasn’t been able to dwell too much on that one night at Optus Stadium.

“I’ve got to be careful here, because it has been easier than what I’ve been expecting. It could turn pear-shaped pretty quickly. But I’ve got a sleeper and an eater and my wife is superhuman at 2am.”

Gawn admits he “left it late” seeking advice about fatherhood.

“I made a couple of really late phone calls, the night before. I was more worried about my performance around labour.” It’s been a huge year for Gawn, whose wife Jess gave birth to the couple’s first child George a month ago. Picture: Instagram

As for his on-field performance, Gawn still believes there is scope for substantial improvement. And it is a young teammate providing the impetus.

“The person who’s driving me at the moment is Luke Jackson. I’m teaching him a lot around marking and ruck craft, some of the stuff that’s my strength, and he’s teaching me a whole lot without me even knowing around what you can do post-ruck contest, around getting involved and quick decisions.

“[But] I still stress, that key first point is being a dominant centre bounce ruck. And that’s something we will try to turn him into.”

Having won one premiership, this group of Dees are somewhat fortunate. To guard against complacency, they can call on the motivation of winning a grand final at the ‘G.

But even beyond that, there are hungry players who missed out.

“Speaking to Jordan Lewis in particular, the drive comes from the players that miss out. I feel like I’m incredibly driven to win in 2022, but I’m guessing someone like a Sam Weideman will be even more driven right at this moment.”

Weideman may need to dislodge Tom McDonald to get into the side. McDonald sparked a minor storm last month when he came out against mandatory Covid-19 vaccinations for AFL players, not withstanding that McDonald himself is vaccinated.

“He’ll come out strongly against anything Tommy if he had the chance,” Gawn said.

“He’s the weirdest person I’ve met in footy. I’m very close with him...we’ve been mates for a long time. He’s strong on a lot of things. He’s very strong on this meat diet he’s doing.

“I certainly got vaccinated, wanted to get vaccinated. I understand why I had to. I want to keep: one, my job going, two, my family safe, and three, I’ve got a piece in hospitality as well.”