Could it be Brisbane, Freo, Geelong or Melbourne? Or even Carlton? No team being standout favourites makes for a great finals series, Mick Malthouse writes.

Max Gawn’s ankle injury was the result of an accidental football incident. It happens,

The back issue he took into the Queen’s Birthday clash was made worse by shouldering the full force of the Steven May, Jake Melksham debacle.

Where was the presidential, administrative, or even coaching support?

It was once again left up to good old Max to carry the load for the club. At some stage that is going to get to you.

We will probably hear from those people when Melbourne starts winning again, which it will.

It’s whether or not it can win enough games now to finish in the top four.

But that’s up to the Demons.

The next three rounds will only muddy the waters for the top eight. Have the Demons broken Max Gawn?

It is still mathematically possible for these clubs to make finals but, in reality, it’s not likely.

None of them are currently good enough to win the games required to fit into the eight.

Remarkably, on any given day, with the way these clubs are performing, they are all a chance.

If they can saddle up at the right end of the draw with a week off before finals, anyone with a full list and confidence can win the premiership.

It’s whether the bottom four can win four games in a final’s series, or whether the top four can hold their nerve.

Ladder leader Brisbane has a poor finals record under Chris Fagan, with just one win from six finals. It’s not a spectacular stat. I wouldn’t call it stage fright, but I would call it too many of the big-name players not performing at their best in the big games that matter.

On that record you could almost dismiss the Lions, but their game against Melbourne in Round 15 could give them a top four finish, and with that they get a huge home ground advantage. The finals record is still a big question mark for Chris Fagan and the Lions. Picture: AFL Photos/Getty Images

The jury is still out on Fremantle for many, but I believe it has a very good solid backline which is essential for finals footy.

Its forwards are OK, and its mids – with Sean Darcy in the ruck – have been impressive.

But there is still an intangible nagging suspicion about the Dockers’ ability to go all the way.

There is just something missing from Fremantle that suggests greatness at this stage.

To discount any doubt, the next month of football will determine its fate as a true contender or a good developing team.

Carlton, other than its fade-outs, has been quite spectacular.

The Charlie Curnow, Harry McKay combination (like the Tom Hawkins, Jeremy Cameron threat) presents so many headaches for the opposition.

With a midfield of captain Patrick Cripps, Sam Walsh, George Hewett, and Matthew Kennedy, there is simply no reason to discount the Blues for a late game in September.

We will certainly know more about Carlton’s prospects after Round 16 having played Richmond, Fremantle, and the Saints by then, which could see them equal top, or stationary on nine or 10 victories. The Blues have a host of elite weapons, including Charlie Curnow and Patrick Cripps. Picture: Michael Klein

St Kilda and Sydney, as much as they play different styles of football, are each capable of consolidating a position in the top four with the right to announce, “we’ve arrived.”

The Swans play finals football every week. The Saints dare to play it but quite often end up playing over-possession footy with too much reliance on a young Max King to do the bulk of their scoring.

Both have steady, tough-to-score-against back lines.

Paddy McCartin has such an inspirational story, and his impact on his brother Tom has had such a profound effect on how the Swans are playing.

You would not want to lower your guard against Sydney in September, because they are finals hardened, aggressive, and hungry.

I could almost put Collingwood and Richmond in the same category. Yes they are different, but they also have many similarities. No-nonsense back lines, well-lead, hardened forward lines, and experienced midfields.

Watching the Pies last Monday against Melbourne you couldn’t help but be impressed in the club spirit, and team camaraderie and discipline.

That can take you a heck of a long way.

The Tigers have had so many disruptions. 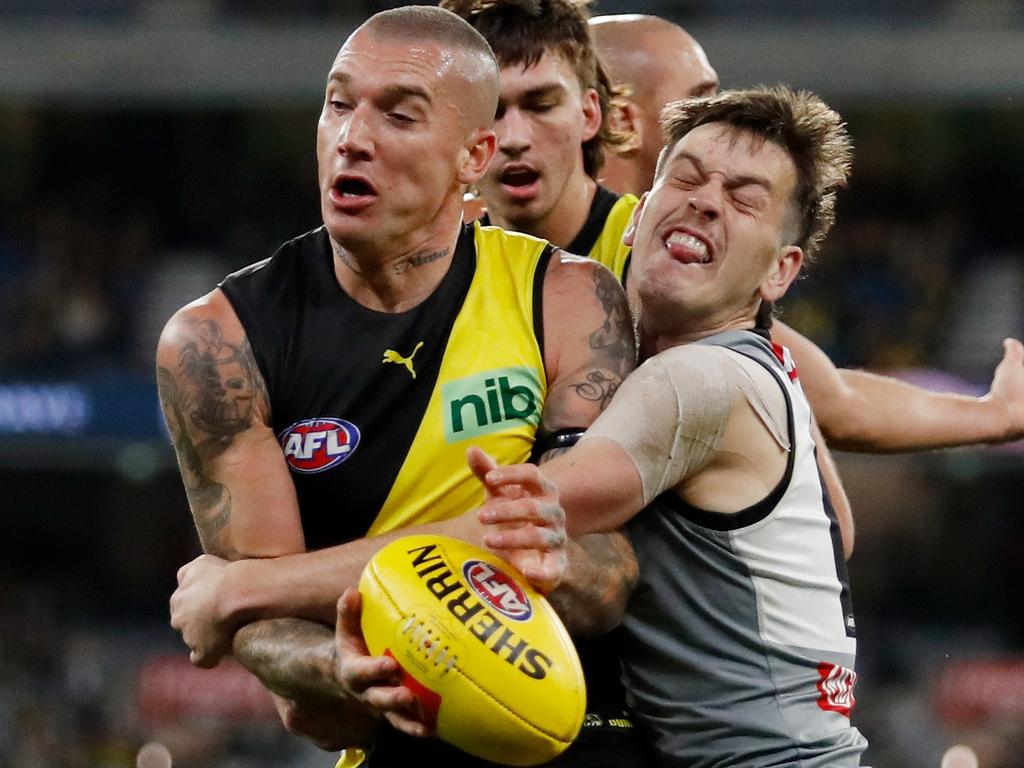 Dusty’s been in and out, but the Tigers have the know-how and tools to win it all. Picture: AFL Photos/Getty Images

Dusty Martin out, in, and out again. Tom Lynch in and out with injury, and in and out of form. Trent Cotchin is a good leader, but he is tiring and slowing. Dylan Grimes as captain is an inspiration, but hardly a match winner.

Richmond knows how to win; it’s done it before. This year it’s whether it can sustain its current game structure for long enough. In the next three weeks we will certainly get a glimpse of how far the Tiges have come this season, or how far they still need to go.

Which brings us to Geelong.

The Cats have been called “too old” for a number of years, and yet have remained a consistent performer.

Since 2019 (inclusive) they have played 10 finals matches, winning four of them. Finals are tough so that is quite a good record.

Sam De Koning has changed the dynamics of the Cats’ backline. Jack Henry is out but will come back in.

Tom Stewart could be the first backline player in many years to break the midfield dominance of Brownlow votes.

No one can argue the potency of the Geelong forward line.

Cameron has taken his game to a new level. And Benjamin Button Hawkins keeps delivering.

If there was one area of concern, and it has generally been their greatest strength, it’s the midfield. 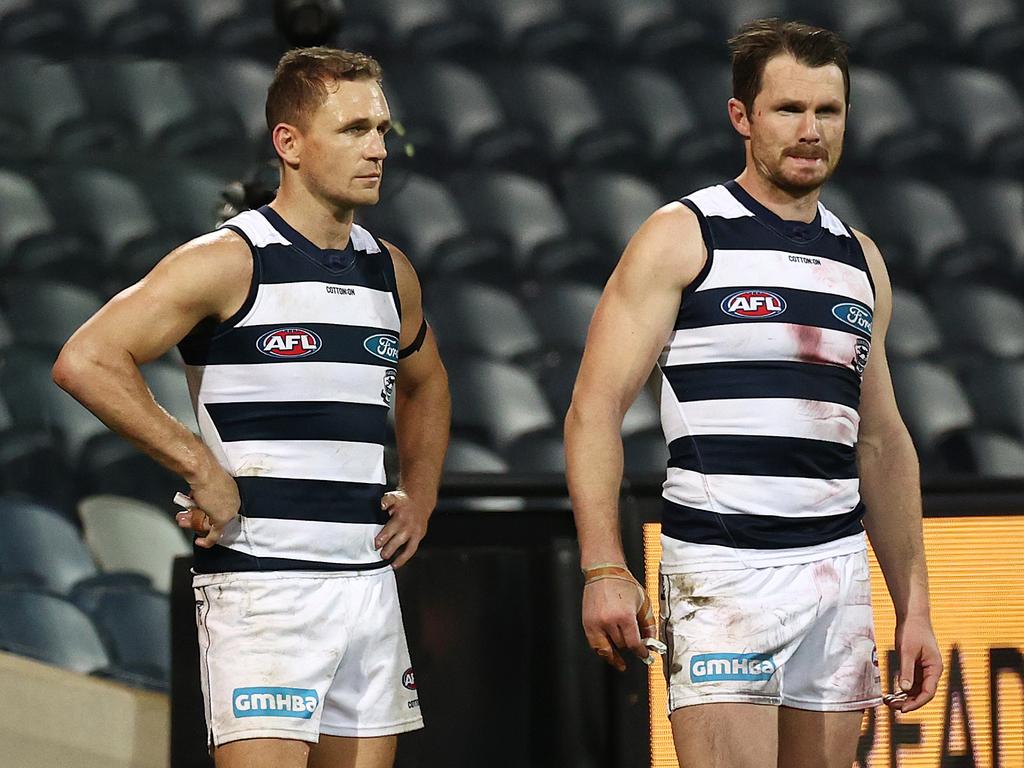 Do Selwood and Dangerfield have enough in the legs to power the Cats to a premiership? Picture: Michael Klein

Ageing skipper Joel Selwood, and Patrick Dangerfield having gone from an elite and powerful athlete to a warhorse, makes them vulnerable. Brendan Parfitt has improved, but Mitch Duncan needs to be moved back into the midfield.

The elephant in the room, which has been there since Brad Ottens last played, is who leads the ruck? Rhys Stanley can have a day out or go missing in any given week.

Geelong is as close to a premiership now than it has been for several years, and it could genuinely be the Cats last fling at the cup for a few years.

By definition, they have an easy draw – facing just three clubs currently in the top eight in the remainder of the season, two of them at home. But that doesn’t win you a premiership.

And simply, no one is dominating. Instead, it seems to be the year where most clubs are falling down around Geelong.

So, who will be left standing? Or who will stand up? There is not a side in the eight that would be overly confident of winning the Cup this year, which means no one is fearful of losing it either.

That makes for a great contest, and plenty of intrigue.