Richmond was one of the AFL’s most disappointing sides in round 1. Their midfield is in tatters and key veterans are out of form. Mick Malthouse looks at the Tigers.

Two of the most disappointing sides of round 1 were Richmond and St Kilda. Not their losses necessarily, but the methodologies that let each club down and revealed some worrying signs.

The Tigers were totally overwhelmed from halfway through the third term by an energetic, aggressive Carlton side, with 31 scoring shots to 21 by game’s end.

The ruckmen virtually cancelled each other out albeit that Toby Nankervis had more tap outs.

While Richmond’s top ball getter was Dustin Martin with 21 disposals, and the Tigers’ midfield as a whole managed just 65 disposals. That’s a huge difference. Shai Bolton is an excitement machine but lacks consistency.

Bolton is extremely exciting, but he lacks consistency throughout a game. Trent Cotchin (32 next month) and Shane Edwards (33) really looked their age and had no impact for the Tigers.

Dion Prestia suffered another hamstring injury. And now that Martin — the superhero of the group — is taking personal leave, the Richmond midfield seems to be in tatters.

Now is the opportunity to inject the midfield with a new look, like the reliable Liam Baker, a tough nut who can find the ball.

Forward of the ball Lynch has struggled and early indications are that he is lacking confidence and a fair way off recapturing his strong form of 2019-20. Riewoldt, now with a broken thumb, looks miles off his best.

The Tigers play an exciting Greater Western Sydney on Sunday, a team which also failed last week. It is too early to say the result of this game will determine season’s fortunes, but one of these teams will have a 0-2 start to the season by Sunday night. It’s always a massive challenge to make the finals from there. St Kilda lowered its colours to a revitalised Collingwood last week. And the issue that haunted the Tigers — low impact from the mids — also hampered the Saints in their 17-point defeat.

Jack Steele, like Dusty Martin, will always be about the mark, and was so with 28 disposals. Jade Gresham in his return from injury was terrific with 24 touches and two goals.

But Brad Crouch is a peashooter. He doesn’t get the distance or find enough targets, and he doesn’t defend. I don’t know what has happened to Seb Ross. He has lost the structure that once made him a fine player. One of his best past games was when he tagged Patrick Dangerfield out of the contest while gaining great metreage for the Saints. Where has that spark gone?

Yes, young Jack Hayes had 18 possessions and three goals and was fantastic on debut, but like Richmond who allowed Carlton to dominate too much of the football and too much time with the ball, the Saints allowed Collingwood the same luxury.

Patrick Lipinski picked up 30 disposals, Jordan De Goey cameoed in the middle and forward with 27 disposals and five scores including two goals. And Taylor Adams, the warrior, had 25 and most were contested. 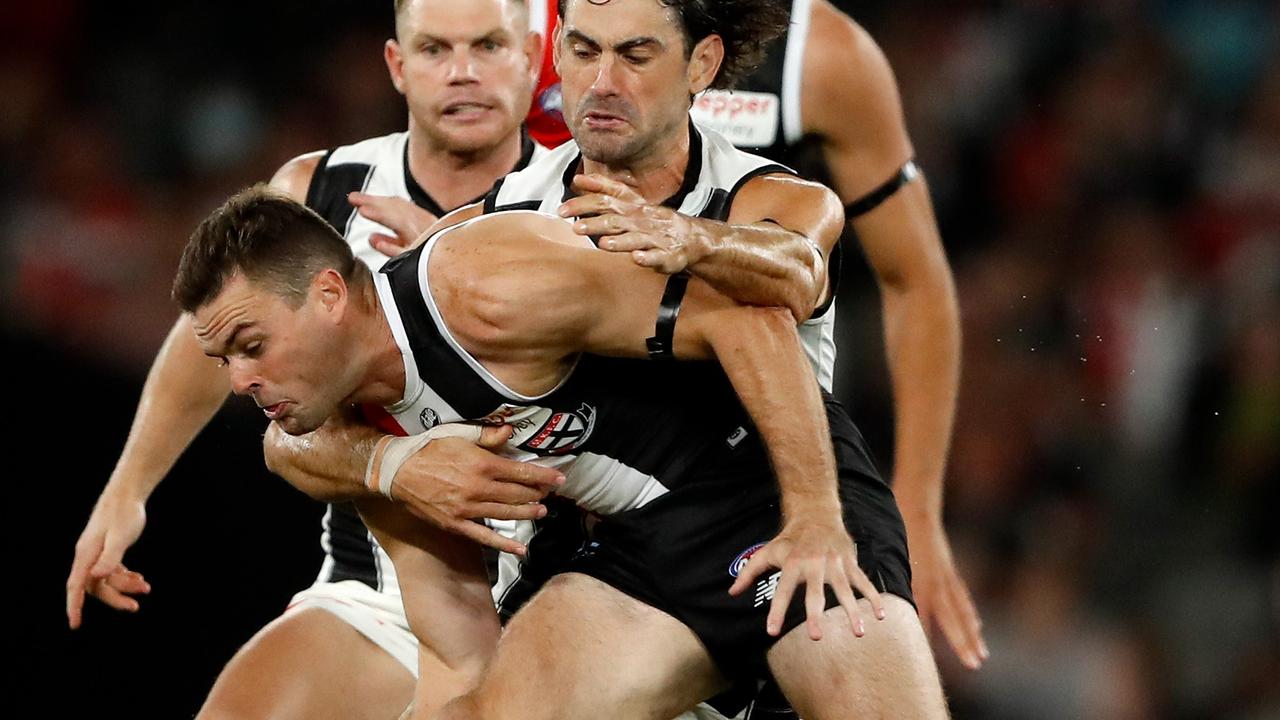 Max King offers a lot and looks great, but his single goal output was really disappointing. Someone needs to grab him and teach him to relax and provide a better foundation for set shots on goal. It looks like he lacks concentration and confidence.

An undersized Tim Membrey always delivers. But I can’t help think that the Saints recruitment of small forwards Jack Higgins and Dan Butler hasn’t produced what they expected. Butler didn’t score against Collingwood, but still had six tackles. Higgins kicked four behinds and laid just one tackle, which is damning.

The Saints must be hanging for the return of young star on the rise, Hunter Clark to get some more run through the midfield. 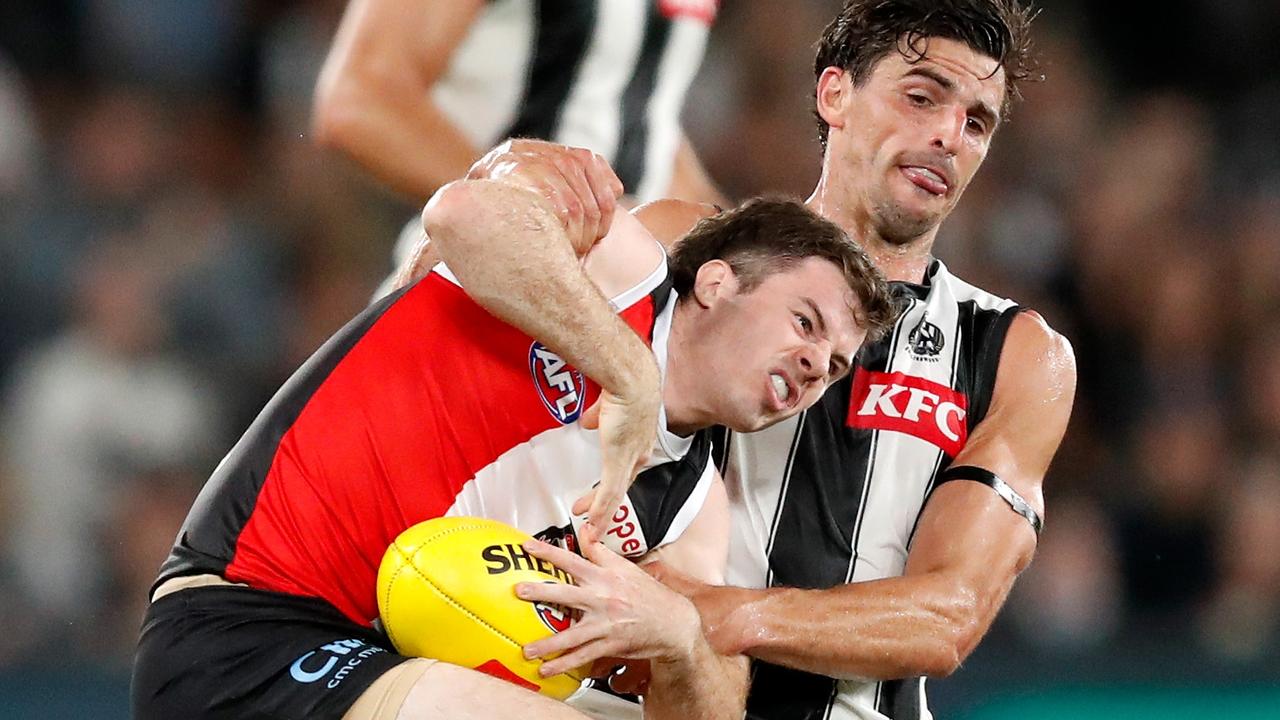 Richmond and St Kilda meet next week in round 3, so after Sunday’s games they both have the chance to enter that clash one win, one loss. But on last week’s form they could just as easily each be 0-2.

The Tigers of old were relentless and someone would always step into the breach to inspire the team with a Lion-like effort. It’s a lot to expect of Martin each week, especially now.

At the Saints it appears everyone expects Jack Steele to be the man of steel, always.

It’s supposed to be a team game.

Pre-season I predicted that there would only be one place in the eight for these two teams to fight over. Unless they get on the board quickly, they both might miss September action.

A look at Damien Hardwick and Brett Ratten last week showed frustration at turnovers and missed shots at goal, and at times a resignation for the underperformance of their teams. It makes coaching even tougher.

The new 6-6-6 role ties the coach’s hands at the centre bounce, but the organisation when the ball is bounced must be a team effort. When your captain (Dylan Grimes) is on the backline or in the ruck (Nankervis) it is hard to motivate the team from those positions, despite each doing a ripping job.

Steele has had to inspire his team virtually solely for two years.

Without on-field direction and motivation, the opposition can become unstoppable.

Momentum swings are part of the game, but it does take great leadership across the ground to halt the opposition. Cotchin was having a stinker, as too was Lynch and Edwards, who are all senior players. The Tigers need more from them, which history shows they can deliver, so they are a big chance on Sunday.

St Kilda’s midfield won enough of the footy but were downhill skiers. Against Fremantle at home on Sunday it will take more than just Marshall, Steele, and Gresham to pull the Dockers up.

Attention to detail is the key. Whether it be set shots, tagging one of the opposition’s best players, or playing tough football for the full four quarters, focus and commitment should be the order of the day for both teams, on Sunday and going forward.