North Melbourne have received their fair share of top draft talent in recent years yet they continue to slide backwards. But if that slide leads to a priority draft pick, the other clubs won’t be celebrating.

In this week’s column, eagle-eyed football journalist Jay Clark sharpens the pencil and announces who is on notice for the coming round … Devon Smith is facing an uncertain future at Essendon. 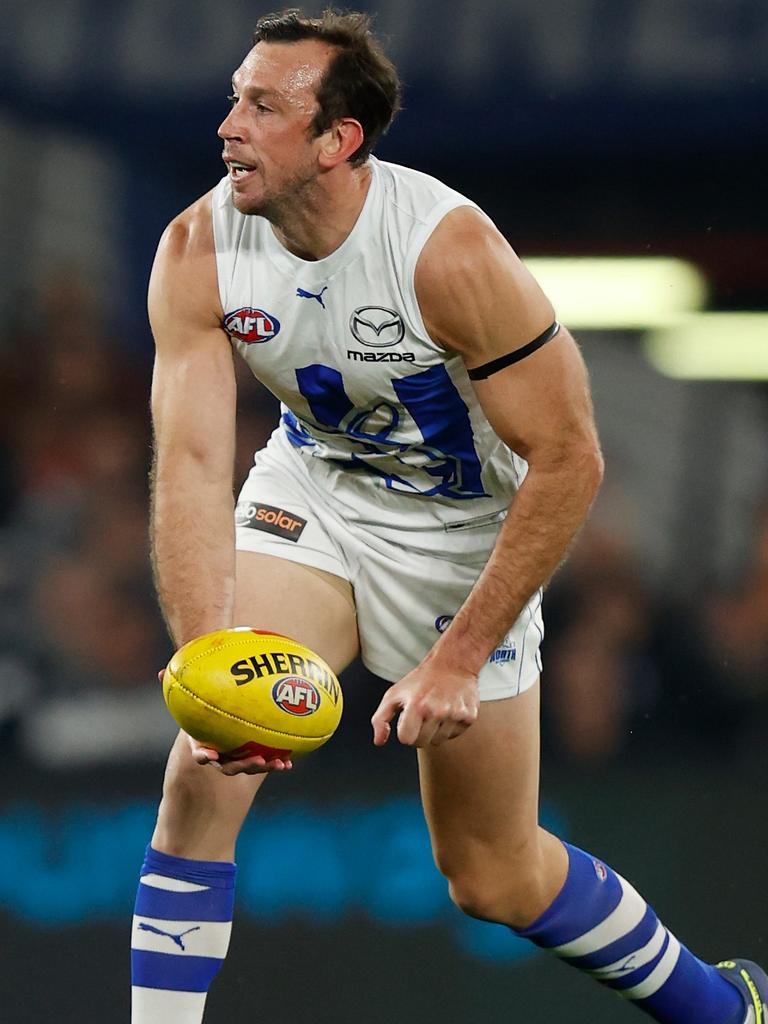 Todd Goldstein has been relegated to No. 2 ruckman at North Melbourne.

Devon Smith’s name is set to bob up in trade talks later this year after falling out of favour at Tullamarine.

The best and fairest winner was dropped to the VFL and now faces up to a month out with an ongoing knee issue.

At 28, he is contracted for one more year in red and black.

But even with the Bombers desperate to boost their small forward stocks is seems likely Essendon would consider any offers for Smith if he cannot re-establish himself in the second half of the season.

Essendon is eyeing the sons of Alwyn Davey, Jayden and Alwyn Jnr, in this year’s draft as father-son selections.

Jayden has suffered two knee reconstructions but both players have exciting upside and could add to the Bombers’ forward stocks for next year as developing players.

North Melbourne’s Todd Goldstein has to be one of the most loyal players in the game.

The durable ruckman has carved out an excellent career at Arden St including All-Australian and best and fairest honours across 15 seasons.

But did he miss a trick not accepting a four-year offer from Geelong in 2019?

The Cats tabled a handsome deal for the man who could have helped solve their ruck headaches at the time, but Goldstein maintained the faith in North and had a preference to remain in Melbourne when he re-signed an improved three-year deal at the Kangas.

But that deal expires this season which could reignite the Cats’ interest on an incentive-based contract which would reward Goldstein for the games he plays.

Goldstein has started behind Tristan Xerri at North at times earlier this season, but even Xerri has held out on contract talks after attracting St Kilda’s string interest last year.

Xerri is looking at a decent payday to stay at North beyond this season.

Geelong big man Rhys Stanley has nursed an ankle niggle this week and Jon Ceglar has been unable to get out on the park after a knee issue. North Melbourne could land another top young star if it received a priority pick. The Roos snapped up Jason Horne-Francis at pick one last year.

Expect a riot from rival clubs if North Melbourne receives a priority pick.

Yes, the Kangaroos seem to have gone backwards this year without Ben Cunnington, Jed Anderson and Robbie Tarrant, going down by an average 60 points over their past five games.

An 11-point loss to Sydney Swans when Jack Ziebell snagged five goals was a highlight.

But it’s a thin argument to suggest the Roos deserve a priority pick when they have had choices number one (Jason Horne-Francis), three (Will Phillips, who has been out with glandular fever) and four (Luke Davies-Uniacke) in recent years, and will get another top-two pick this year.

Fair to say rivals have scoffed at talk they should get a priority pick in this year’s draft when the spotlight might otherwise fall on the development of their current young batch.

When the scoreboard goes against them, it’s the steps forward taken by the youngsters that will indicate the level of the club’s progress.

By season’s end, the club and its fans will want to see more ticks than crosses alongside the under 24s.

Clearly, the injury toll and the absence in particular of Tarrant, Cunnington and Anderson has really hurt. Jay Clark wants to see a fast change made to the sub rule for injured players.

There is an easy fix to the sub rule farce that clubs are keen on.

And the league can make the change tomorrow that will make things a lot more clear and fair for all teams.

Once a club has made a sub, the other team should have the option to activate its substitute as well.

Therefore, there is no more advantage for the first team which brings on a fresh running player late in the last quarter or whenever.

If a player went down early, it would be interesting to see at what point the other side pulled the trigger on their change.

The official rule says players can only be subbed out when they suffer a legitimate injury which is expected to keep them out for 12 days.

But let’s be honest, they are taking more Mickey than Disneyland, and a switch needs to be made to straighten things up.

The sub rule has never been popular, but at least it could be fair for both sides. 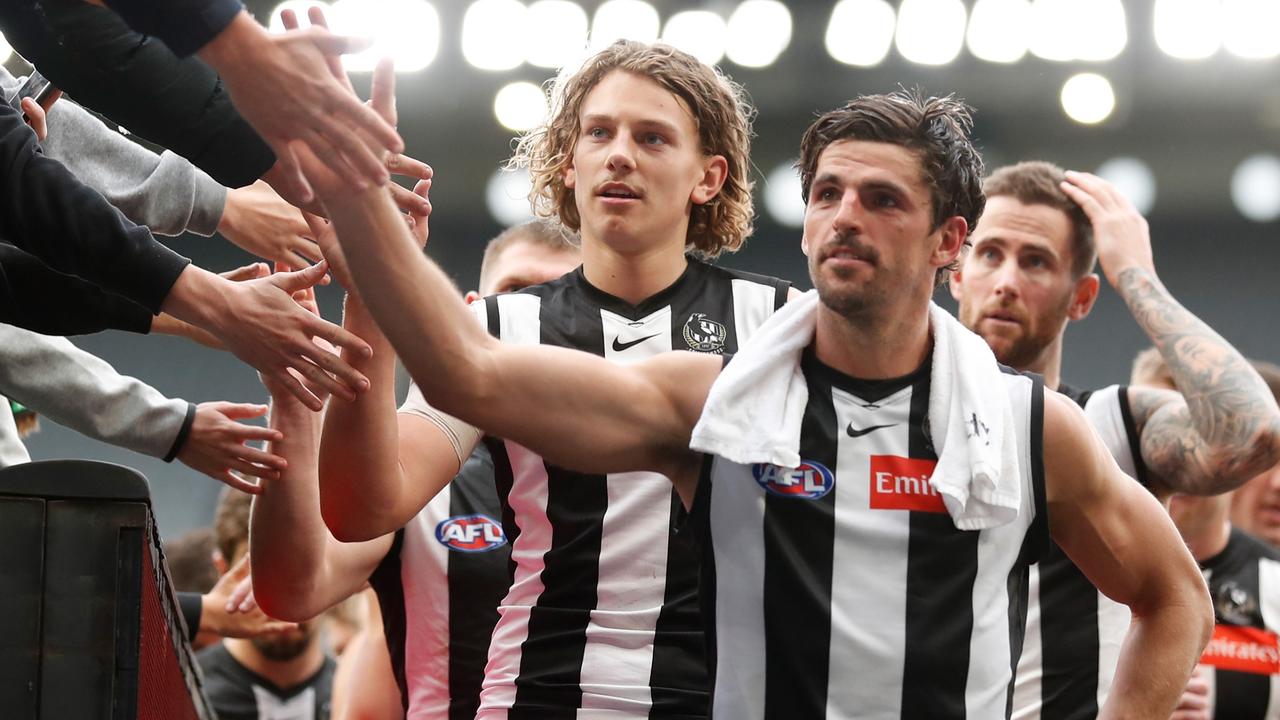 Scott Pendlebury is in All-Australian form in a new role at halfback.

The All-Australian selection panel have an enormously difficult task trying to split hairs on the game’s guns each year.

One third into the season and Patrick Cripps (Carlton), Christian Petracca and Clayton Oliver (Melbourne), Andrew Brayshaw (Fremantle) and Lachie Neale (Brisbane) have all made flying starts to the year as they look to sew up midfield spots.

Hawthorn’s James Sicily has to be a lock for the first berth of his career and Max Gawn and Tim English have been the standout ruckmen even with Gawn selflessly giving Luke Jackson the reins for huge chunks of games.

But one man the selection panel can’t sleep on is 34-year-old Collingwood champion Scott Pendlebury in his new half back role.

It has flown under the radar, but Pendlebury is currently the second- highest ranked general defender in the game according to Champion Data.

It brings back memories of Matthew Boyd (also aged 34 at the time) who won All-Australian honours the year he moved into a half back role in the 2016 premiership campaign.

Pendlebury, who already has six All-Australian jackets in the cupboard, has averaged 25 possessions, 6.4 intercept possessions, and 350m gained a game this year.

But it his trademark ninja blade precision which elevates him as the Collingwood skipper has the fourth-highest kick rating (13 per cent) in the game.

Credit to coach Craig McRae whose decision to switch the silky superstar to defence has worked a treat in his first year in charge. Will Brodie has left Gold Coast and trade watchers scratching their heads.

It is one of the most head-scratching deals of last year’s trade period.

And six months on Fremantle must now be giggling about how they fleeced Gold Coast in the swap for hard nut Will Brodie.

The midfielder has been a key cog in the Dockers’ engine room averaging 26 possessions a game over the first seven matches for Justin Longmuir’s side.

A former top-10 pick, he never got going at Gold Coast playing 25 matches in five seasons up north.

But what is staggering in that trade between Fremantle and the Suns is the fact that the Dockers also received pick 19 as some sort of super sweetener in the Brodie transaction.

It was an incredibly valuable pick as it gave the Dockers the first choice of the second night of the draft (which clubs offered up two early second-round picks for) and eventually earned Freo classy midfielder Matthew Johnson.

The Dockers rated Johnson so highly they had him in the mix at pick 10 when Freo opted for jet playmaker Neil Erasmus.

So, the Suns gave up picks 19, 61 and 69 as well as Brodie to Fremantle, in exchange for a future second and fourth-round choices from the Dockers.

Reading between the lines here, the Dockers gave up pick 19 to Fremantle to essentially take Brodie (and his wage) off the Suns’ books.

The Suns were in a tight spot as they were jammed for list spots and salary cap space and needed some relief, with big deals pending for Ben King, Jack Lukosius and Izak Rankine.

But from Fremantle’s perspective, what a steal for a player who happened to be a Freo fan growing up in Euroa.

What hurts the Suns even more is the future picks have dropped well down the draft order as they are tied to the Dockers’ position on the ladder.

Fremantle is up to its neck in a top-four spot this year after missing finals last season so that second-round choice may not be used until the 30s in the draft order.