Tigers fans remain unhappy about the unpaid 50m penalty after the final siren and Sam Landsberger believes they have a right to feel aggrieved. See the AFL’s verdict on the call.

Richmond was robbed on Friday night. Dion Prestia should’ve been given a shot on goal from inside 50m to draw the game.

The AFL released a statement today backing the umpire’s decision to not pay a 50m penalty, but I disagree.

Anyone who scoffs at that needs to read the Laws of Australian Football 2022 document.

Law 10.5 a) and b) on page 34 articulate how the end of quarters must be adjudicated. Richmond players appeal to field umpire John Howorth for a controversial 50m penalty after the siren, which was not awarded. Picture: Dylan Burns/AFL Photos via Getty Images

“For the avoidance of doubt, if immediately before hearing the siren to end a quarter, a field umpire is of the opinion that a Player should be awarded a free kick or a mark, the field umpire shall signal that play has come to an end and then award the free kick or mark to the player.”

The second infringement committed by Sydney — Chad Warner booting the ball away — constitutes a 50m penalty under law 19.1 ‘Spirit and intention’.

It states: “After a mark or free kick has been awarded to a player, a fifty metre penalty will be awarded against the opposing team which delays or impedes the play, or behaves in an unsportsmanlike manner.”

Law 19.2 (e) adds it must be imposed when a player or official: “has not returned the football directly and on the full to the player awarded the mark or free kick”.

The precedent was there. In round 5 Fremantle’s Sam Switowski was caught holding the ball on the wing and he then dropped the Sherrin after the siren blew.

A 50m penalty was paid after the halftime siren and Essendon’s Nik Cox was gifted a shot close to goal.

The AFL can’t have it both ways. Sadly, on Friday night there were countless examples of nonsense — over common sense — in the previous two hour hours before the dramatic finish.

Not just from umpires — but from undisciplined players.

Football fans are angry. They are angry at the 61 free kicks paid on a red-hot Friday night match.

They should be angry at the soft free kick that gifted Sam Reid the first goal of the match.

They should be angry at the prohibited contact free kick paid against Daniel Rioli.

They could also be upset at the free kick paid to Prestia in the first place, given he appeared to make high contact with Warner a second earlier.

That was dumb. However, applying the rule book is all fans are after.

Then again, reading umpiring documents isn’t a strength at the AFL – evidenced by the executive ignoring the report into the sexual abuse of female umpires until it was published by the Herald Sun.

But for those with a copy of the Laws of Australian Football document the grey in Friday night’s frantic finish fades.

It is black and white.

The league said the free kick to Richmond player Dion Prestia was correctly paid (by the non controlling umpire in the centre of the ground) and almost immediately after the free kick was paid, the siren sounded.

The umpires then made the correct call in not applying a 50m penalty against Swans player Chad Warner, given the immediacy of the free being paid, the siren sounding and the ball being kicked into the crowd, the AFL said in the statement.

It is the same discretion often used around the ground when umpires don’t believe a player has heard the whistle and kicks the ball.

It comes after Richmond coach Damien Hardwick questioned the umpire’s “common sense” justification for not awarding a 50m penalty. 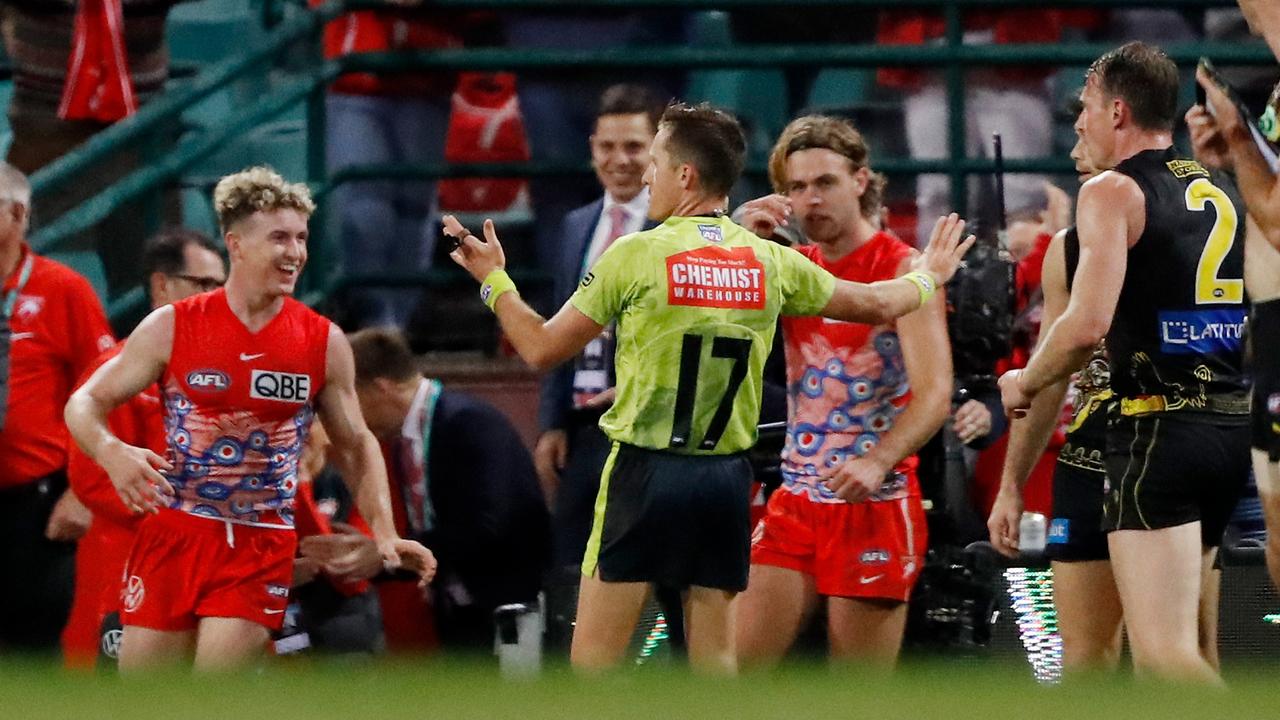 The Tigers, including Jack Riewoldt and Dylan Grimes, remonstrated with the umpires, imploring they pay a 50m penalty. Picture: Dylan Burns/AFL Photos via Getty Images

An unpaid 50m penalty one second before the final siren sparked controversy and secured Sydney a famous come-from-behind victory as Tigers stars remonstrated wildly with the umpire.

Prestia won a free kick on the boundary two kicks from goal.

Swans youngster Warner booted the ball in joy into the crowd after hearing the siren, but not the whistle.

The Tigers, including Jack Riewoldt and Dustin Martin, remonstrated with the umpires, with Riewoldt imploring the official to pay a 50m penalty.

The 50m penalty would’ve given Richmond a shot to equalise and secure a draw but in the end, it was scrapped and the result stood.

After the game, Hardwick was quick to not make an issue out of the incident.

“It’s irrelevant. You can look at that last incident, but the fact of the matter is we were up by 30 (33) points, it’s easy to look at the last game, but we should have iced the game,” Hardwick said.

Although, he appeared to have a change of heart on Saturday, taking aim at the umpire’s “common sense” justification.

He tweeted: “Common sense? Sorry, what?”

He added a laughing emoji and a GIF of a dog appearing confused.

Warner explained to Channel 7 after the match he “obviously didn‘t know it was a free kick”.

“Otherwise I wouldn’t have done that,” he added.

Richmond players seek clarification as the field umpire awards the free kick but not with a 50m penalty.

Swan Luke Parker kicks it long into attack to no one in particular. It would have probably been a free kick for deliberate out of bounds, but it stops just short of the boundary line. Chad Warner, who was busy in the last minute shenanigans, almost gives away a free kick after colliding with Tiger Daniel Rioli and bumping him slightly in the back as the ball gets knocked over the line. The two field umpires look at each other, but a boundary throw in is the result.

The Tigers work the ball forward and a throw in is had about 70 metres from their goal. They are still down by six points and time is running out. 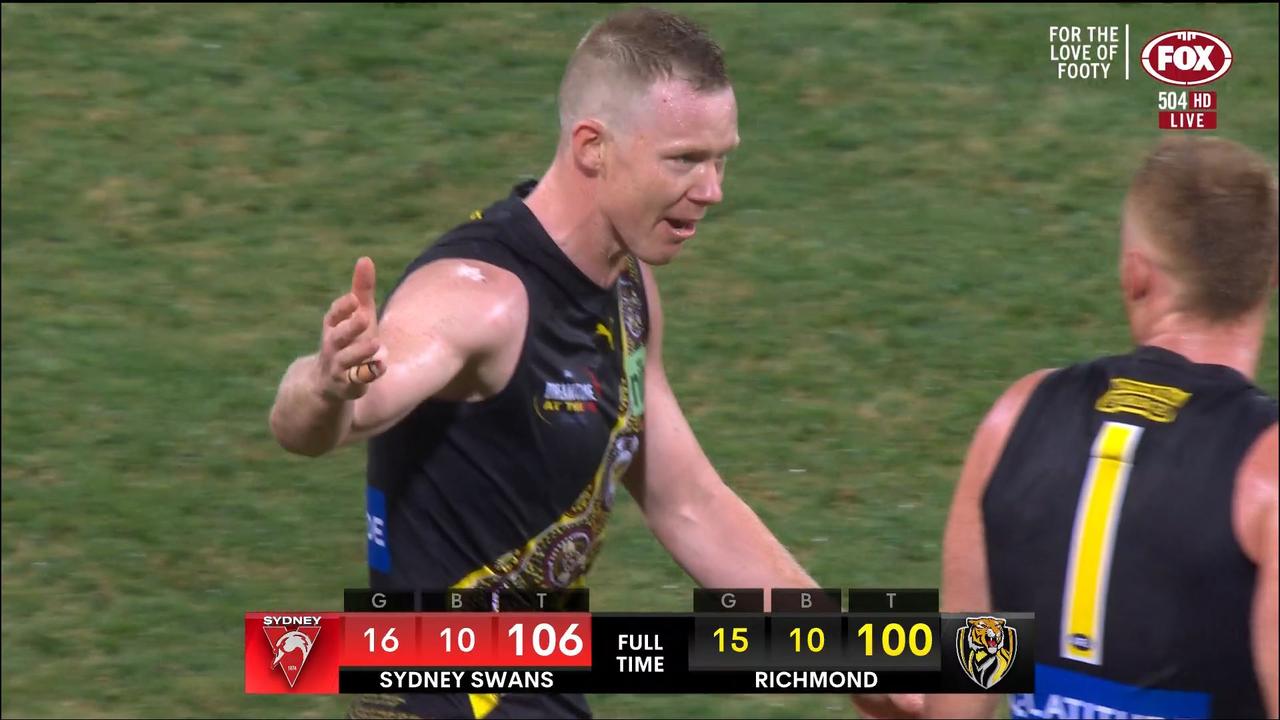 Jack Riewoldt argues with the field umpire, but to no avail.

Neither side can gather the ball cleanly, and Lance Franklin sees the ball over the line about 70 metres . It looks all over for the Tigers as the clock ticks down.

Tiger Dion Prestia receives a very dubious free kick after the umpires deem he was held by Rowbottom as the siren sounds. A delirious Warner kicks the ball into the crowd in celebration. 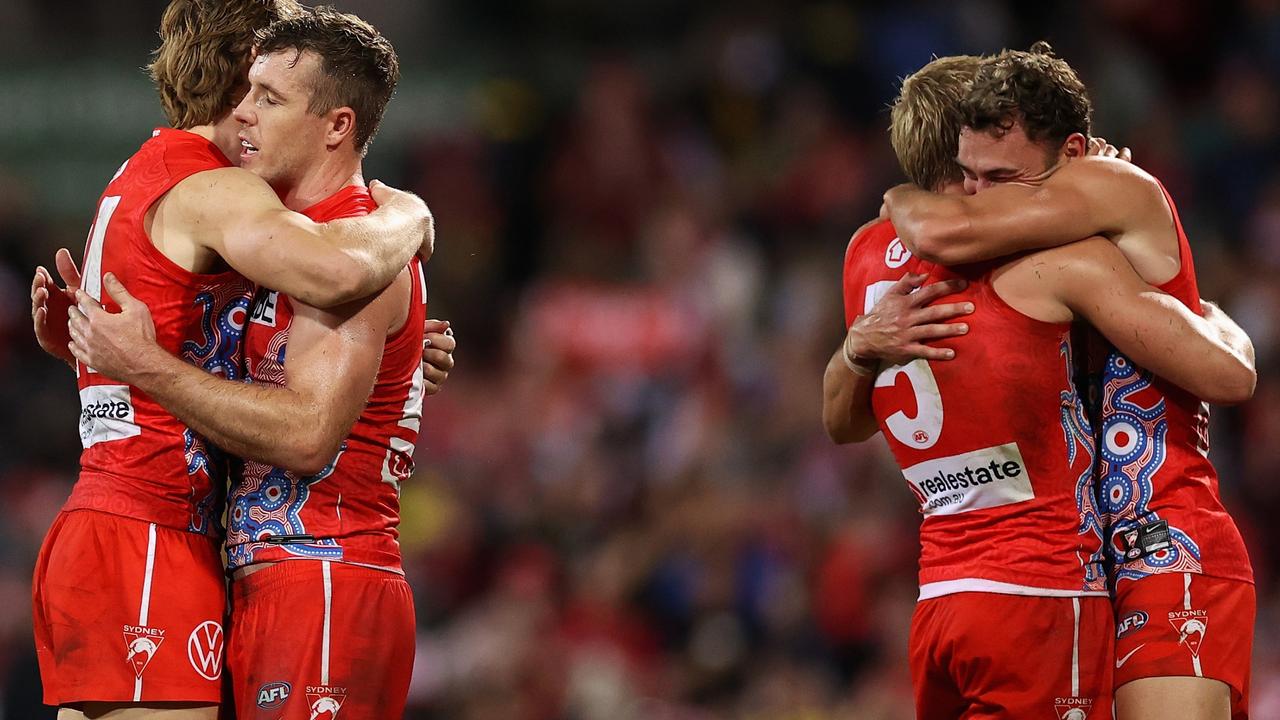 No 50m penalty is awarded, with Prestia’s kick from about 80m out falling well short.