Multiple clubs have sounded out master coach Alastair Clarkson but the ideal job has just opened up. See why the Giants tick all the boxes for Clarko.

Leon Cameron might well have written his own coaching epitaph for the 2022 season when he labelled his side’s performance “boring” on Saturday night.

The Giants have been many things over many years, but very rarely boring.

They have been feral with their attack on the ball in the finals campaign that took them all the way to the 2019 grand final.

They have been all-out attack as the Orange Tsunami took all before it and yet couldn’t always stop their opponent coming the other way.

Boring is an indictment on a team with so much talent in a season that surely will come to a conversation about when Cameron passes the baton on to a caretaker coach.

GWS will assess Cameron this year on game style, on player development and on win-loss in the context of early-season injuries and Greene’s five-week suspension.

So, a game in which a near-full-strength GWS was out-coached by Chris Scott is exactly the kind of 52-point loss that crystallises the belief it is time for new ideas. Leon Cameron struggled to get the best out of GWS. Picture: Phil Hillyard

When you are falling out of love it is easy for your eye to wander, and so it is natural to wonder about how James Hird’s presence at the club will influence the decision.

Everyone at GWS believes Hird is doing a fabulous job in mentoring and leading while uttering unconvincing statements about him not being up for the full-time job.

It is probably true – we are three months short of a full seven years since Hird “resigned” from Essendon, and he would need an apprenticeship again.

Yet as GWS and Cameron tire of each other – only natural after a decade at the club – how can they not look at the full Hird package that smacks of charisma and effortless class and make some kind of comparison.

It is what happens at the end of a relationship – you downplay the clear strengths of your existing partner to wonder what might be with someone else.

So Cameron will move on, and it is Alastair Clarkson who should be the natural fit for the AFL’s most recent expansion club.

As the Herald Sun revealed last Thursday, seven or eight clubs have already inquired about his services and GWS is clearly one of those.

Clarkson is tossing up whether he wants a legacy project or a pay cheque or a landing spot that wins him a fifth flag.

He might have to pass up the size of the AFL ambassadorial cheque that would be on offer at Gold Coast, but he gets everything else he needs at the Giants.

Of the coaching legends to burnish their legacies with expansion clubs, Ron Barassi took over a Sydney side at rock bottom and Kevin Sheedy kickstarted the Giants from the Rooty Hill RSL. 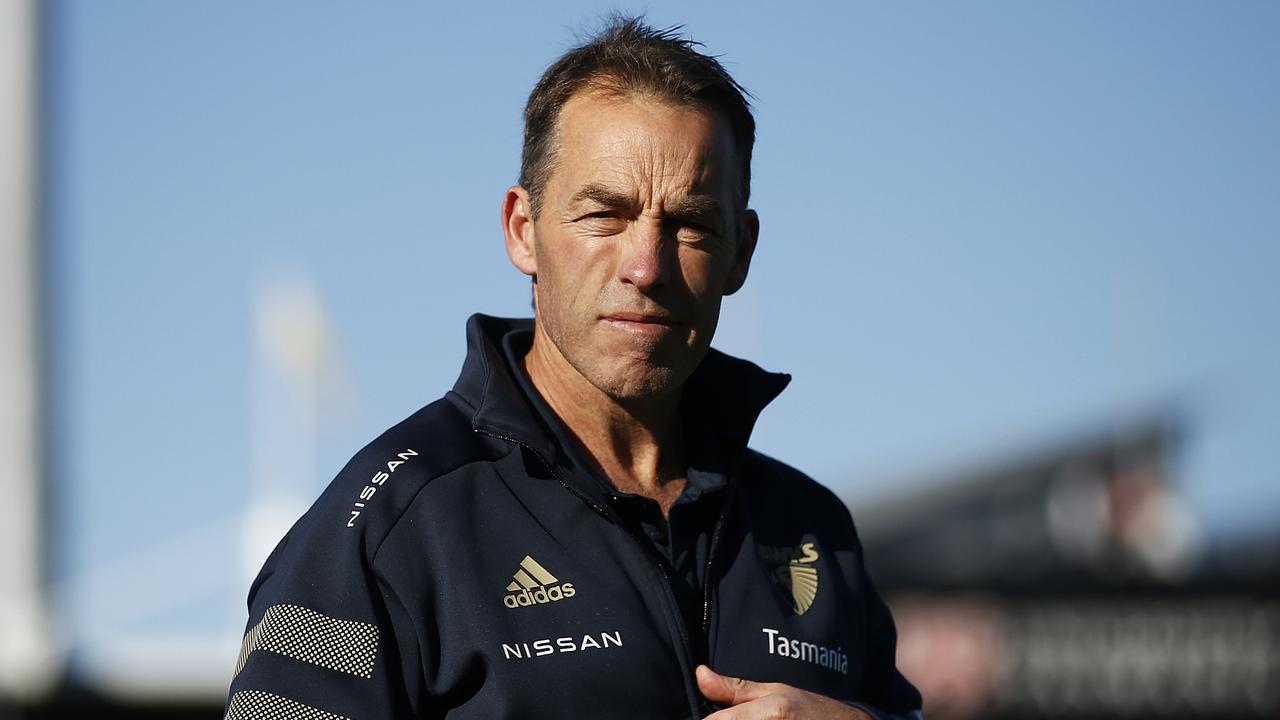 But given the stars won’t align for Clarkson to coach Tasmania, GWS is not only the legacy project but the best possible chance for a premiership that would put him in a club of only five.

Coaching legend Malthouse would still be filthy that his final stint with Carlton worked out so poorly, and in that there is a cautionary tale for Clarkson.

No one can take those flags off you, but after his final six seasons at Hawthorn without a finals win he doesn’t need a mediocre 100-game coaching stint elsewhere that has people questioning if he still had it at the end.

GWS has achieved everything it wants so far except a premiership, and Clarkson gets a ready-made list that can take him there again.

Consider the talent on this list that is still under 30 and would be available for a concerted 3-5 year premiership window: Toby Greene and Stephen Coniglio (both 28), Lachie Whitfield, Josh Kelly and Jesse Hogan (27), Tim Taranto (24), Sam Taylor (23), Tom Green (21), Lachie Ash (20).

There are gaps in the list – small forward Hill still hasn’t made his mind up about leaving for Melbourne, Hogan’s body is unreliable, star interceptor Nick Haynes will be 30 next year.

But if the one query about Clarkson is whether he values the draft, he has a list that has just secured Finn Callaghan (pick 3) and Leek Aleer (pick 15) this year, Tanner Bruhn (pick 12), Connor Stone (pick 15) and Ryan Angwin (pick 18) last year and Ash (pick 4) and Tom Green (pick 10) the season before to make seven top-20 picks since the 2019 national draft.

Clarkson might eventually be lured by a $2 million package up north if Ben King’s absence ends Stuart Dew’s career, or the romance of a former home (North Melbourne, Port Adelaide) might appeal. But if Clarkson tallies up the pros and cons GWS is surely at the top of his list, and why wouldn’t the AFL find some ambassadorial cash if he is prepared to roll up his sleeves to sell the code in NSW to boot?

Clarkson’s greatest coaching attribute was dreaming up incredibly complex tactical structures like the defensive web that became Clarko’s cluster and selling them in an incredibly simple manner to his players.

In other words, distilling complicated tactics in a manner every player on his list could not only understand but execute.