Stephen Curry was stunned when asked about being a two-way player but the Golden State Warriors megastar’s development on the defensive end is real. Recently, a reporter began asking Steph Curry a question by calling him a “two-way player.”

He opened his eyes comically wide, cocked his head and nodded slowly in shock. Everyone in the room started laughing so hard that the reporter was momentarily cut off.

The Warriors‘ senior vice president of communications, Raymond Ridder, interjected, joking that the question was scripted.

“Good job,” he told the reporter. ”That’s not exactly what I emailed you, but close.”

If there were a moment that summed up the degree to which Curry is not considered a defensive standout, that was it. The best shooter of all time? Sure. But a lockdown defender? Even Curry got a good chuckle out of that.

Except, in the 2022 NBA Finals, Curry is showing that‘s exactly who he has become.

He has demonstrated the ability to play smothering defence on whomever he‘s guarding, as well as the speed and power to burst through forests of defenders to grab rebounds over guys a foot taller.

In the Warriors‘ 107-97 victory over the Boston Celtics in Game 4, Curry finished with 43 points and 10 rebounds, eight of which he grabbed on the defensive end.

“I could probably make a case that pound-for-pound, he might be our best defensive rebounder,” Warriors defensive guru and assistant coach Ron Adams told FOX Sports.

Curry‘s growth on the less glamorous end of the court has been a treat for Adams to witness. When Adams began working with the team in 2014, he foresaw this was the type of player Curry could become.

Now, Curry has realised his potential.

“This is without question the best version of him,” Adams said. ”Maybe he had more prolific scoring years than this year. … But I do know from an all-around game perspective and also from being a two-way player, this is the best he has ever been.” 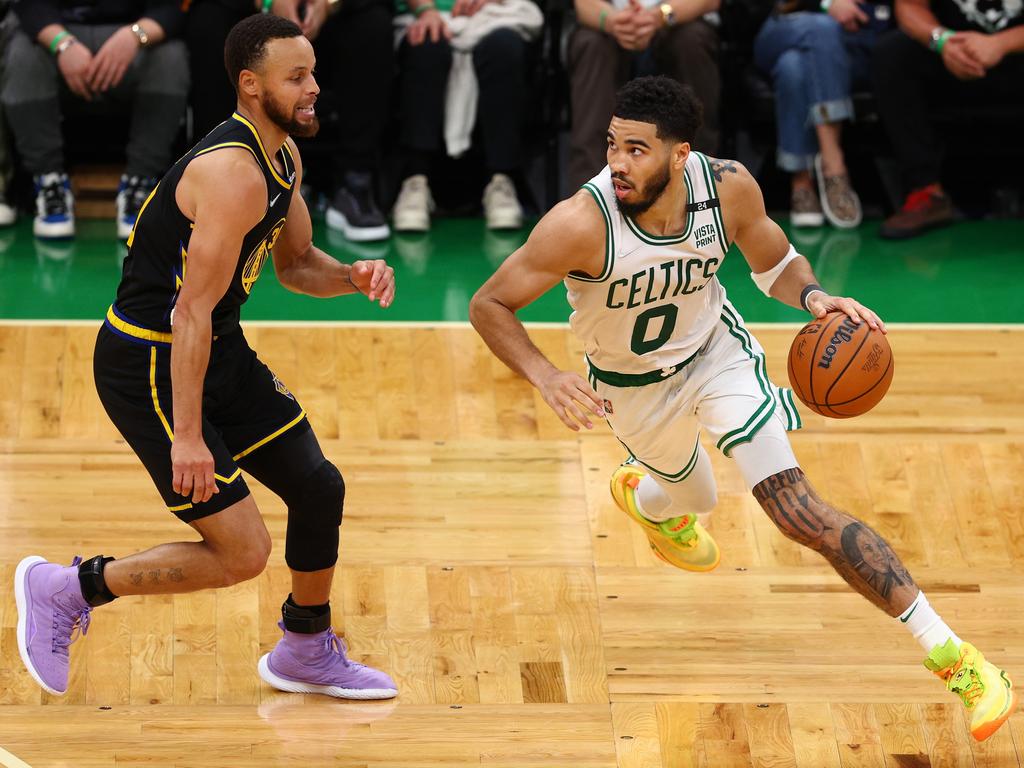 Adams believes Curry had a breakthrough on the defensive end two years ago, after he broke his left hand four games into the 2019-20 season.

Suddenly, Curry had an extended break from the game, a luxury he wasn’t afforded when the Warriors reached the NBA Finals five years in a row from 2015-19. During his time away from the court, he spent hours honing his skills and lifting weights, essentially rebuilding his body.

He got faster. He got stronger. He got more versatile.

That’s paying off now for the Warriors, who have reached their sixth Finals in eight years behind a superstar who is a threat from everywhere, including the defensive end.

It‘s surprising Curry even has the energy to play defence. He’s one of the most prolific scorers in the game, infamous for irritating defenders by running them into the ground. Guarding Curry is similar to playing Whack-A-Mole at an arcade, a frustrating and dizzying experience that’s mostly in vain.

The fact Curry has enough left in the tank for the defensive end can be puzzling, so much so that Warriors coach Steve Kerr has referred to Curry as the most well-conditioned player in the NBA multiple times this postseason.

Curry‘s longtime trainer, Brandon Payne, says one of the big reasons we’ve seen a leap on the defensive end from Curry is because he finally developed what Payne refers to as “his grown-man body.”

“A lot of players typically get that between ages 27 and 29,” Payne told FOX Sports. ”He just started getting it around age 33. Now, he‘s entering into that time of his life where he has that true grown man strength, and he’s able to add things pretty quickly physically.”

Steph Curry might be best known for his offense but he's been spectacular on defense, playing passing lanes and picking off steals in bunches!

Payne has worked with Curry since 2011. You might have heard about their arduous workouts, which include mind-blowing drills such as Curry having to dribble a basketball in one hand and a tennis ball in the other while staring at a light fixture that’s constantly switching colours, signalling for him to do different drills with each hand, faster and faster and faster.

What‘s lesser known is that some of their workouts are directly applicable to defence.

Because Curry plays so much golf, Payne concentrates on making sure Curry doesn’t twist when he plays basketball, a movement he refers to as the “enemy” of shooters. And the exercises they do to combat twisting also make him a better defender.

“We place a heavy emphasis on vertical core stability,” Payne said. ”That’s a big thing for shooting, and you see that translate defensively when you see him play with leverage, being able to redirect players with his chest and not his hands. Those are places that it shows up.”

They often begin their workouts by doing activation drills to make sure Curry’s hips remain static while dealing with dynamic resistance. Sometimes Curry will stand still as Payne tries to move his hands from the middle of his body. Sometimes Payne will put force on Curry’s core in multiple directions simultaneously, often with bands.

“We call it having a puncher’s core,” Payne said. ”You’ve got to be very strong through your core, even as you’re trying to create force yourself.” Klay Thompson and Stephen Curry react to a play in the fourth quarter during Game Four of the NBA Finals. Picture: Elsa/Getty Images

Both Kerr and Draymond Green have cited Curry‘s increased strength as one of the main reasons he has become more of a force on defence.

“He’s able to hold his ground, so you’re not able to bump him off his spot, and that’s been huge for us,” Green said.

What makes Curry unique is that as his strength has increased, he has been able to seamlessly apply it to his skill set. Being strong isn’t rare in this league. But being able to use that strength strategically is another matter.

“There might be other guys around the league who are very good in the weight room or very strong physically, but they can’t translate their strength to skill,” Payne said. ”He’s able to.”

Curry‘s increased brawn has paid dividends, as we saw in Game 2, when he bodied up Al Horford, who has 50 pounds on Curry, and was able to force him to commit a turnover late in the third quarter. Just 40 seconds later, Curry smothered Payton Pritchard, forcing him to pass the ball.

After the game, Kerr called Curry “breathtaking” in that period, as the Warriors turned a two-point advantage at halftime into a 23-point blowout, referencing both the point guard‘s shot-making and his defensive effort.

In Game 3, however, Curry was hunted on the defensive end of the court. The Celtics kept attacking him, likely as a strategy to try to tire him out. Curry picked up two of his four fouls quickly and was physically taken out of the game — and the Warriors suffered for it.

They have a different look when Curry is able to play aggressively on both ends of the court. In the fourth quarter of Game 4, Curry had three defensive rebounds, as many as the entire Celtics team.

Stephen Curry put on a masterpiece of a performance last night ðŸ‘ pic.twitter.com/NTAHqhkSOp

For Curry, being an effective defender is so much more than sheer strength. Adams believes Curry‘s growth in that area is directly correlated to his increased maturity, intelligence and effort. Curry is a three-time champion, a two-time MVP and an eight-time All-Star — but he’s always looking for ways to improve.

“I think there comes a point when you say to yourself, ‘I’ve done all of these things,’” Adams said. ”’I can still get better. How can I get better? I can be better defensively.’”

Curry has said improving on defence has always been a goal. Now, he has more of the know-how and ability to make that a reality.

“From my rookie year to now, it‘s always been about effort and just a care factor, overcoming physical limitations with match-ups or whatever it is,” Curry said. ”If you try hard, good things will happen. And you’ll continue to get better. So, it’s always been a point of emphasis. Just better at it now.”

Not long ago, Curry got a good laugh out of being called a two-way player, but on one of the biggest stages in sports, he‘s now earning the title. He has transformed into the most complete version of himself, a thing of beauty for everyone around him to behold — except, of course, those in the opposite locker room.

“He wants to be remembered as one of the all-time greats, which I think he will be and even is at the moment,” Adams said. ”This is just another part of it.”