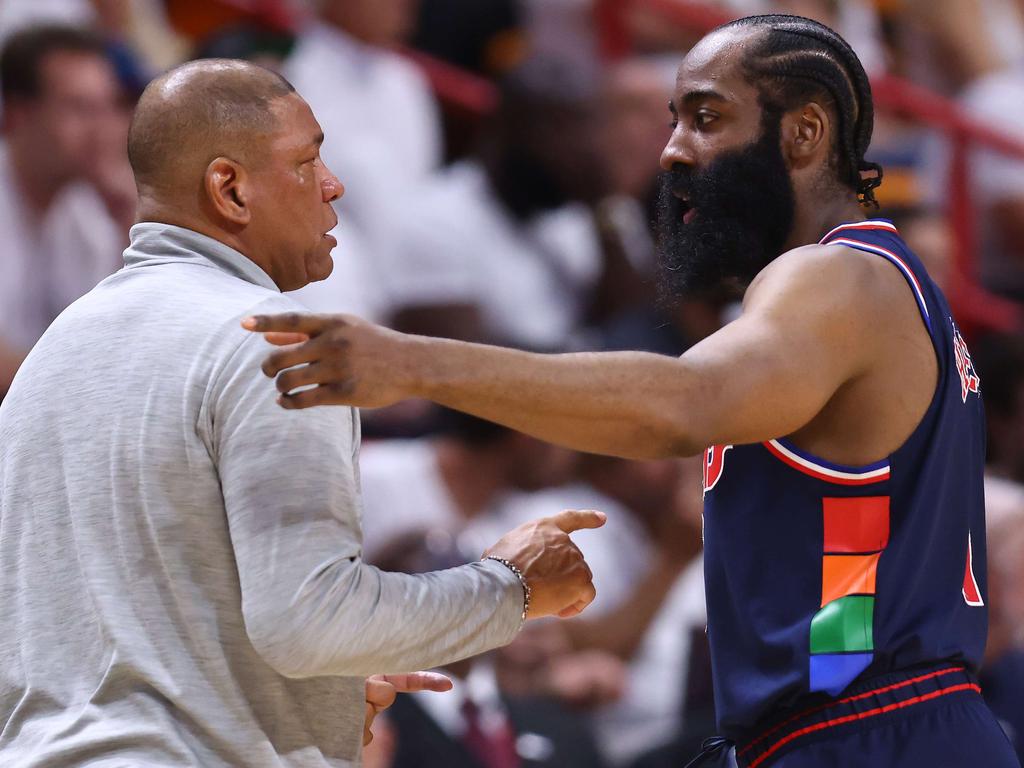 James Harden was unable to help the 76ers past the Heat in the playoffs. Picture: Michael Reaves/Getty Images/AFP

In February, the question was who won the James Harden-Ben Simmons trade.

Now it’s a question of who lost it worse.

And right now, Philadelphia has a Harden problem.

The former MVP passive-aggressioned his way from the Nets to the Sixers back in February. But Harden’s season-ending performance on Thursday was so putrid that people around the NBA are saying his time as a worthy supermax player won’t end during a potential extension. It’s already over.

What’s starting now is his time as a problem, with the Sixers facing choices of paying him a potentially crippling max deal or letting him walk.

Oh, they’ve got choices. And they’re all bad. “I cannot commit to that if I’m the owner of the Sixers,” said former Nets development coach Amar’e Stoudemire, who watched Harden for 1 1/2 seasons, ahead of Game 6. “I just don’t see the dedication that I need to see from one of the top 75 players. You have to have a certain level of dedication and focus to be the best player you can possibly be, and also be there for your teammates when they need you the most.

“In Game 6 you’re going to need him to play at a high level; and if he’s not capable of that — and as a max player — I’m not now willing to now give you a max contract if you’re not showing me you can handle this situation.”

As so often happens in elimination games, the situation handled him.

Sixers president Daryl Morey – who had been with Harden in Houston – tipped his hand in trying to reunite with his former star. So Nets GM Sean Marks not only swapped his malcontent for Philadelphia’s problem, but extracted a sweetener of Seth Curry, Andre Drummond, two first-rounders and a couple of trade exceptions.

Brooklyn essentially gave up on this year’s title to extend their window of contention, giving themselves a longer runway to climb out of their mess. Down the Turnpike, the 76ers pushed all their chips in to win now with Joel Embiid having an MVP-caliber season. But that ended with a 99-90 Game 6 loss to Miami that may have been the requiem on Harden’s run as a superstar. The Nets were willing to play the long game. Picture: Elsa/Getty Images

The three-time scoring champion had just 11 points on 4-of-9 shooting with nine assists, four boards and four turnovers. After Sixers fans pilloried Simmons for scoring just three points in his final two fourth quarters of the 2021 second-round loss, Harden went scoreless in his last two.

“The ball moved and just didn’t get back to me,” Harden said afterwards. When asked if Rivers had called plays to get it to him, Harden huffed “Next question.”

Here’s the rub: Harden never needed them. He was King of the Iso.

But that was before the hamstring injury he suffered with the Nets last season. Before years of partying and not taking care of himself conspired with injuries to sap his explosion. That’s why Thursday wasn’t a choke job; it was far worse for Philadelphia. It was Harden no longer being capable of carrying a team.

“I don’t think he is this season,” said Stoudemire. “Because [of] not being in top shape. Not taking your body serious.” Harden may no longer be one of the superstars of the NBA. Picture: Mitchell Leff/Getty Images/AFP

“Since we got him, everybody expected the Houston James Harden,” said Embiid. “But that’s not who he is anymore.”

So he can’t get paid like he is. The Nets knew it. The 76ers are finding it out.

Harden has a $47 million player option for next season. He could ink a four-year, $223 million extension, or opt-out and re-sign a five-year pact for $269.9 million — one that would pay an onerous $61 million in the last year when he’d be 37.

The 76ers committed to Doc Rivers as their coach on Friday morning. Will Harden be with him? When asked if he’d opt in on Thursday night, Harden said “I’ll be here.”

But the question is should the 76ers even want that? The smart money says no.