The Tasmania JackJumpers have pulled off one of the biggest NBL playoff upsets in recent memory, eliminating Melbourne United to march into the grand final.

They’ve done it. The Jackies are on the march and the fairytale is yet to be told after expansion club Tasmania pulled off one of the biggest NBL playoff upsets in recent memory, eliminating top-of-the-table Melbourne United.

And it was an angry ant who sucked all the life out of the home crowd, the remarkable Josh Adams jawing, yelling and draining bucket after bucket to end the reigning champions’ season in misery.

Watch Every Game of the 21/22 NBL Finals Live & Free with ESPN on Kayo Freebies. Sign up for Kayo Freebies now, no credit card required >

The recriminations will be severe at United but, put simply, the JackJumpers have had their number for much of the season.

And so it was, with the well-co-ordinated JackJumpers’ fans drowning out the United crowd from their perch in a number of bays in the southwest corner of John Cain Arena, the JackJumpers marched into the grand final. Josh Adams was the hero for the JackJumpers. Picture: Getty Images

JackJumpers’ coach Scott Roth said his team’s success had given the sport a huge boost in the Apple Isle.

“Just an incredible effort for our group,” Roth said.

“To impact the state like these guys have done is just a fantastic thing for our group and the state and I don’t know what to say other than we’re just blessed to be in this position and humbled by it.

“I think we’ve impacted Tasmanian basketball for kids and young females growing up and children to rally around this sport and embrace it.

“Sports are so impactful and just a huge moment for Tasmania in general in a short period of time.” 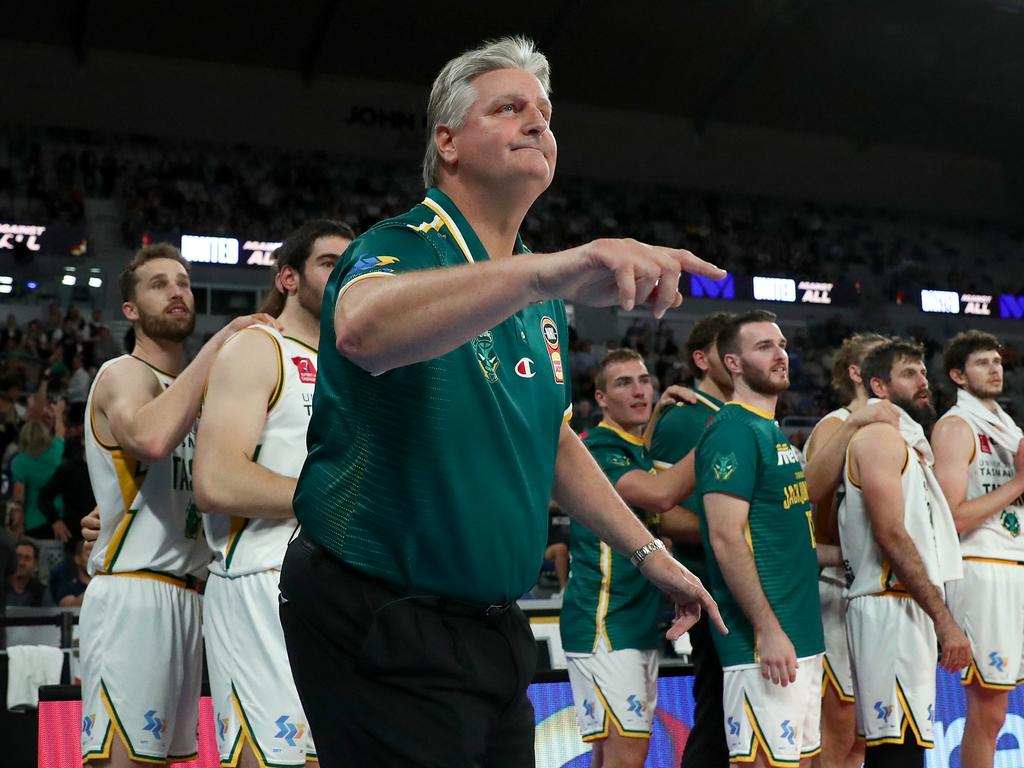 Coach of the Year Scott Roth has led the JackJumpers into the NBL grand final. Picture: Getty Images

The JackJumpers’ defence has been its calling card throughout NBL22 and Roth said he was always confident it was his side’s effort on that side of the ball that would propel it to great heights.

“We just stayed true to ourselves,” he said.

“It just came down to us defending and doing what we’ve hung our hat on.

“I’ve said all along ‘your defence will travel, it will always give you a chance to win on the road in the fourth quarter if you’re doing the right things’.

“It was my mindset from day one when I started to put this team together to be in the top four defensively and I thought it would be good enough to get to where we are today.”

Less than an hour before tip-off, United lost captain Chris Goulding to a calf strain and it was downhill from there.

Disappointed United coach Dean Vickerman revealed coaching staff had time to plan for Goulding’s absence and refused to blame it on the team’s loss — they were horrible from the three-point line and the charity stripe across the three games.

“We had some idea at shoot around today that he (Goulding) was not going to be available,” Vickerman said.

“We got enough stops to win the basketball game, even though they had some moments and some patches that were really good, but we couldn’t throw it in the ocean the whole series.” The JackJumpers, as they have done all series, continued to live up to their nickname, infesting John Cain Arena like ants with their brutal brand of physical in-your-face basketball.

Put simply, the Jackies rattled the reigning champions in a way no other team has been able to in NBL22 — and they didn’t handle the heat without their talisman.

The Jackies took two-and-a-half minutes to score their first bucket and United led 9-2 on the back of an intense defensive effort that they couldn’t sustain it early. The junkyard dog Jackies fought their way back into it and, when former United man Sam McDaniel capped a 12-2 run with a brilliant finish among the trees and converted from the free throw line, they led 14-11.

But Shea Ili, as he so often has, propelled United with nine first-quarter points while Jack White was an absolute monster on the boards as Melbourne took a 25-21 lead into the first break. 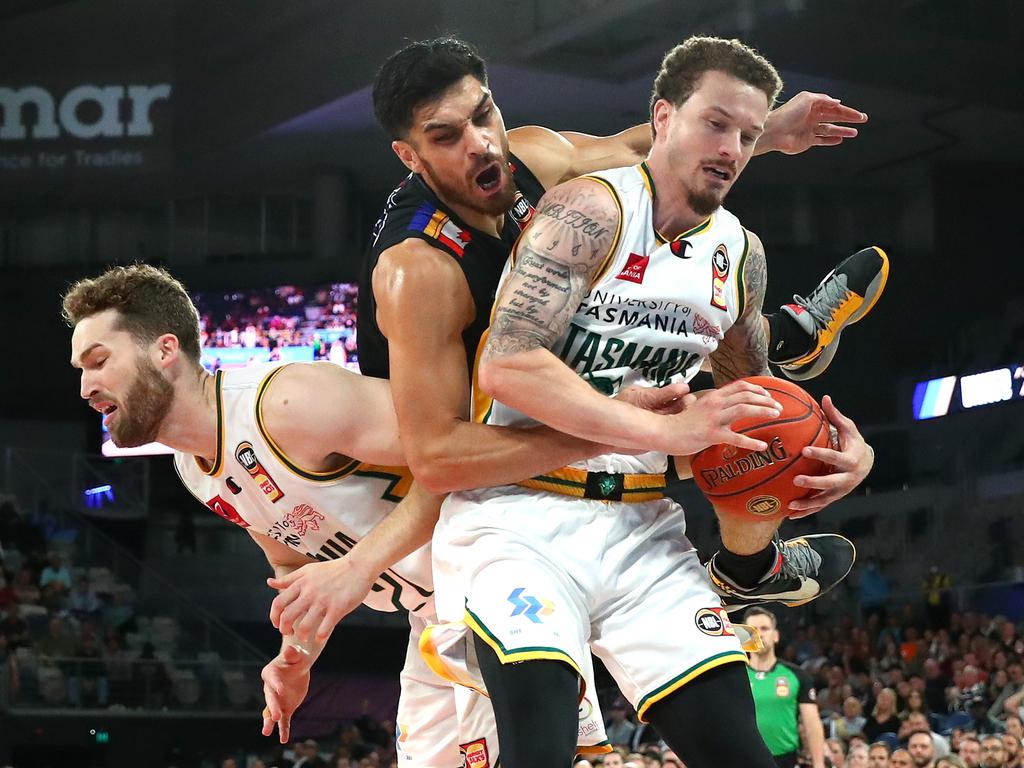 Adams was too much of a load for United. Picture: Getty Images

Vickerman praised the tireless Ili, who took it on himself to try to will United to victory.

“He just absolutely never quit and, whether that was taking two or three people on to get to the rim, whether it was defending at a crazy-high level, or just bouncing out of nowhere to give us an extra possession on a rebound I thought he was exceptional,” he said.

The animated, tattooed Adams is the type of cult figure who is beloved by his own supporters and draws the ire of opposing fans.

But he has the game to back it up and his nine points in the second quarter squared it all up at 40.

He left the floor at halftime to a chorus of boos after taking umbrage with the referee over an offensive foul call and stood there to soak it in as his teammates went down the race.

Big mistake — it energised the Phoenix native and he ignited the team from Tassie with 12 in the third to give them a six-point lead at the last break. United would come again, on the back of star Jo Lual-Acuil Jr, who produced seven points in a 9-2 United run that gave them the lead.

But the Jackies would not be denied, producing a series of breathtaking plays down the stretch and it was fitting Adams would deliver the hammer blow — a three-pointer that put it to bed with a minute to go.

There was no coming back for the champions who now have a long off-season to ponder their missed opportunity.

“We did a good job for the series (on Adams) and then he has 21 in the second half (on Monday night) and credit to him, he’s a pretty tough kid.

“This was a hell of a tough series. The JackJumpers can beat anyone.

“I hope they go on and really challenge Sydney and make it a really competitive grand final.” We’ve all been caught up in the good news story of Tassie’s debut season but it’s time to acknowledge what they are — a very good basketball team. Unheralded Jack McVeigh might be the ‘star’, but, as a collective, they are all on the same page and do one thing very, very well — they never give up on anything. Whether it’s defensively battling — when they’re overmatched in the height and weight divisions — or just finding ways to put the ball in the bucket. Scott Roth has a deep playbook, but there is an element of organised chaos with the way any and every Jackie will take and make a three ball. You can’t help but admire the expansion club and its fans. They rode every moment, selling out MyState Bank Arena on the regular and providing plenty of travelling support wherever the Jackies played. Every club claims to have the best fans in the league — the Jackies might be on the money when they say it. Could they finish with a championship in their debut season?

BRING ON THE KINGS

Sydney enters the grand final as the team to beat after sweeping away the second-seeded Illawarra Hawks in devastating fashion. led by NBL22 MVP Jaylen Adams, the Kings are a potent offensive team with weapons all over the floor. The Jackies are 1-2 against the Kings this season — they’ve beaten every team at least once on their first NBL tour. Worryingly, though, the last meeting ended in one of its biggest losses of the season, a 20-point demolition — in Tasmania. They’ll go in as heavy underdogs but it’s a title that has suited them so well throughout their debut season. 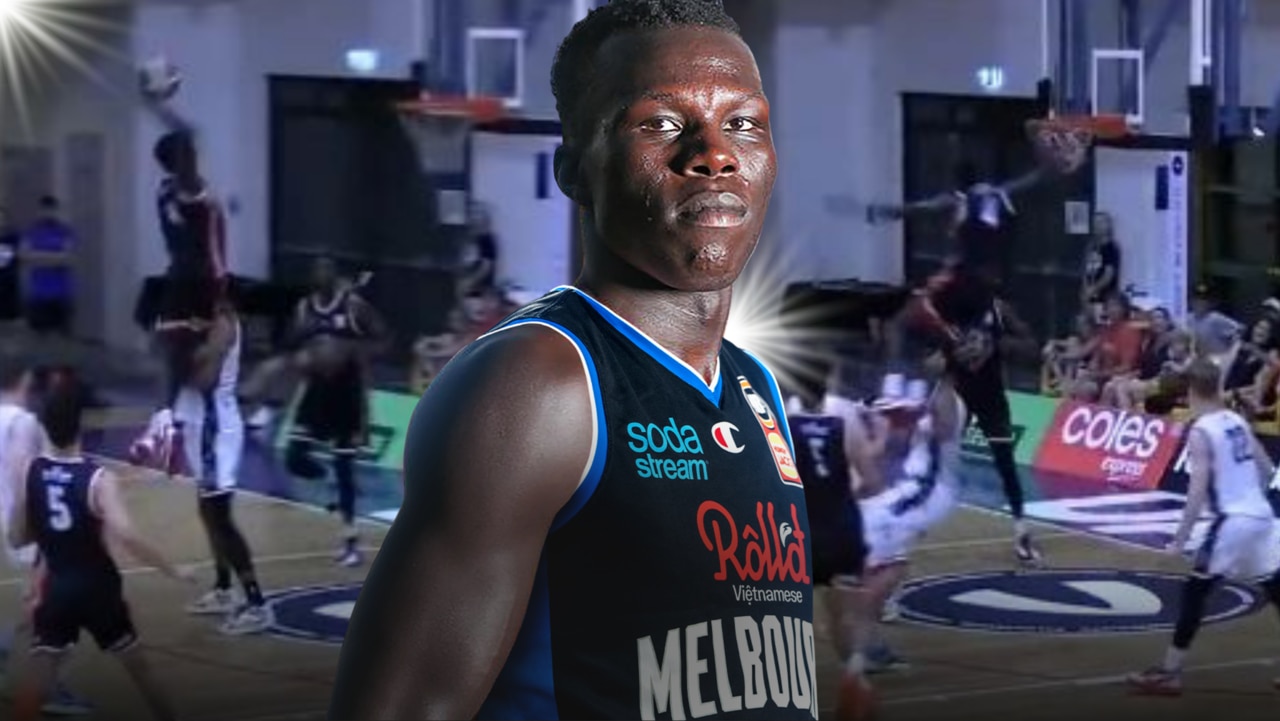 He produced an insane dunk that lit up social media and left tongues wagging but Melbourne United has found so much more in its latest signing. WATCH 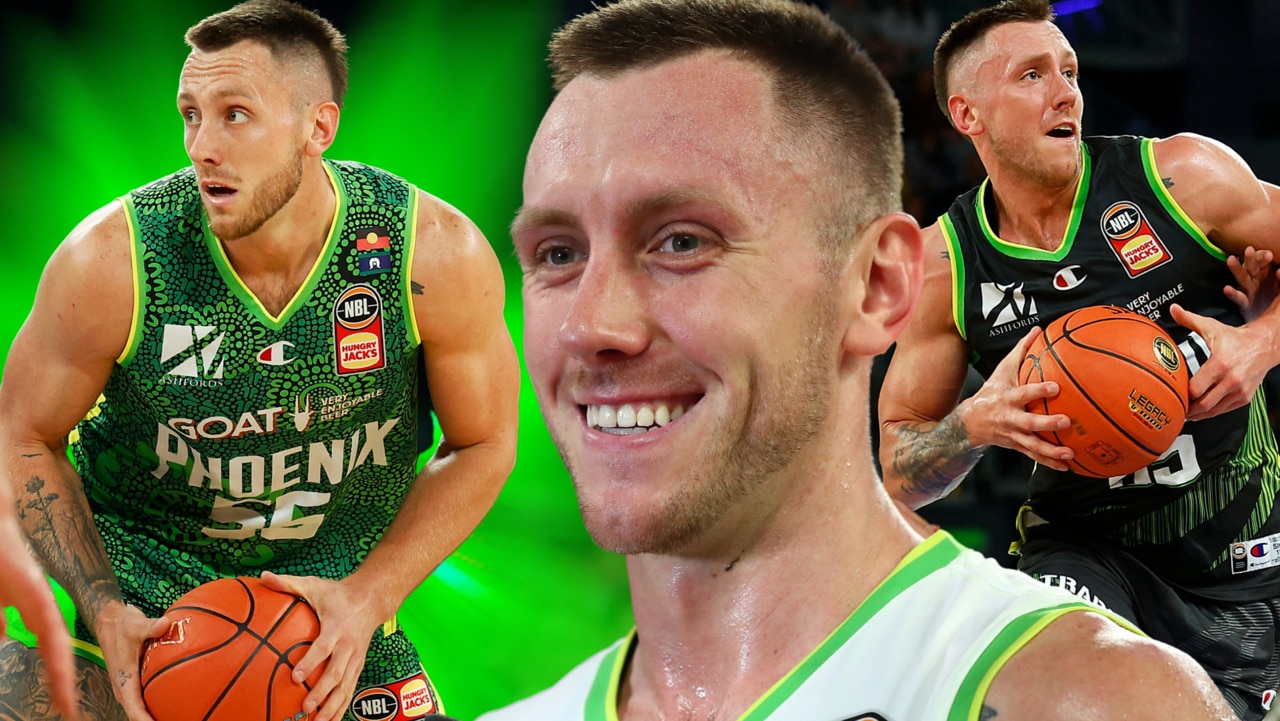 South East Melbourne’s best player Mitch Creek has signed a new long-term deal with the Phoenix — and the club has made a decision on the future of its coach. Why AFL should partner with JackJumpers in Tassie push The Sydney Kings are bracing for rivals and overseas clubs to pick apart their championship roster but already believe they can make back-to-back NBL titles a reality. 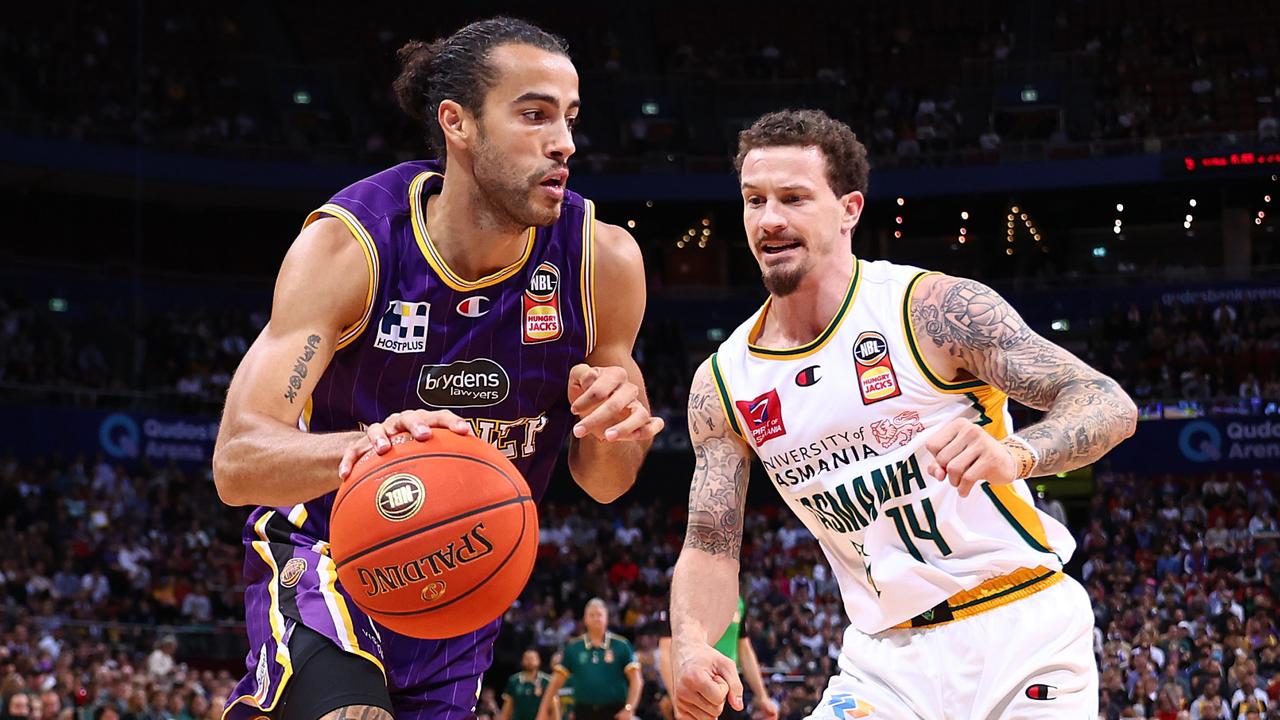