Jeff Fenech’s criticism of Justis Huni’s punching power has been met with an impenetrable defence as his camp vows he will silence all critics by outclassing Joe Goodall in their title blockbuster.

The Justis Huni camp has fired back at Jeff Fenech, rubbishing the boxing legend’s claim that Australia’s heavyweight rising star lacks the punching power to put Joe Goodall to sleep in their title blockbuster on Wednesday night.

Goodall and Fenech have both questioned Huni’s ability as a knockout artist, with ‘Big Bad Joe’ mocking his rival’s inability to put Paul Gallen away early in his last-round TKO of the NRL legend 12 months ago.

Boxing hall-of-fame icon Fenech is concerned Huni lacks the power to win a world title, but the 23-year-old vowed to silence his critics by outclassing Goodall at Brisbane’s Nissan Arena in Australia’s biggest heavyweight fight in 114 years. Justis Huni (right) and Joseph Goodall face off during the weigh in ahead of their heavyweight bout in Brisbane. Picture: Chris Hyde/Getty Images

“I get all these power questions,” Huni said.

“You don’t need to have the most power to be the best.

“Whatever everyone says about power this, power that … all it takes is one shot in this division.

“What will the critics say when I do land one shot?

“You don’t have to be the strongest to be the best. Look at Anthony Joshua versus (Oleksandr) Usyk … you saw the outcome of that fight (Usyk outboxed Joshua last year to win a unanimous decision).

“My boxing ability will get me to where I need to go.

“That’s what I can’t wait to show everyone.”

“Jeff should pull his head in,” Lonergan said.

“For Fenech to come out and criticise Justis is un-Australian.

“He should start being supportive of a young Aussie boxer of Justis’ talent rather than being negative.

“I’ve never heard something so ridiculous. The reason why we haven’t seen those one-punch knockouts is because Justis is still making his transition out of the amateurs.

“When Justis fought Gallen, he needed surgery and basically fought him with one hand and still won by TKO. 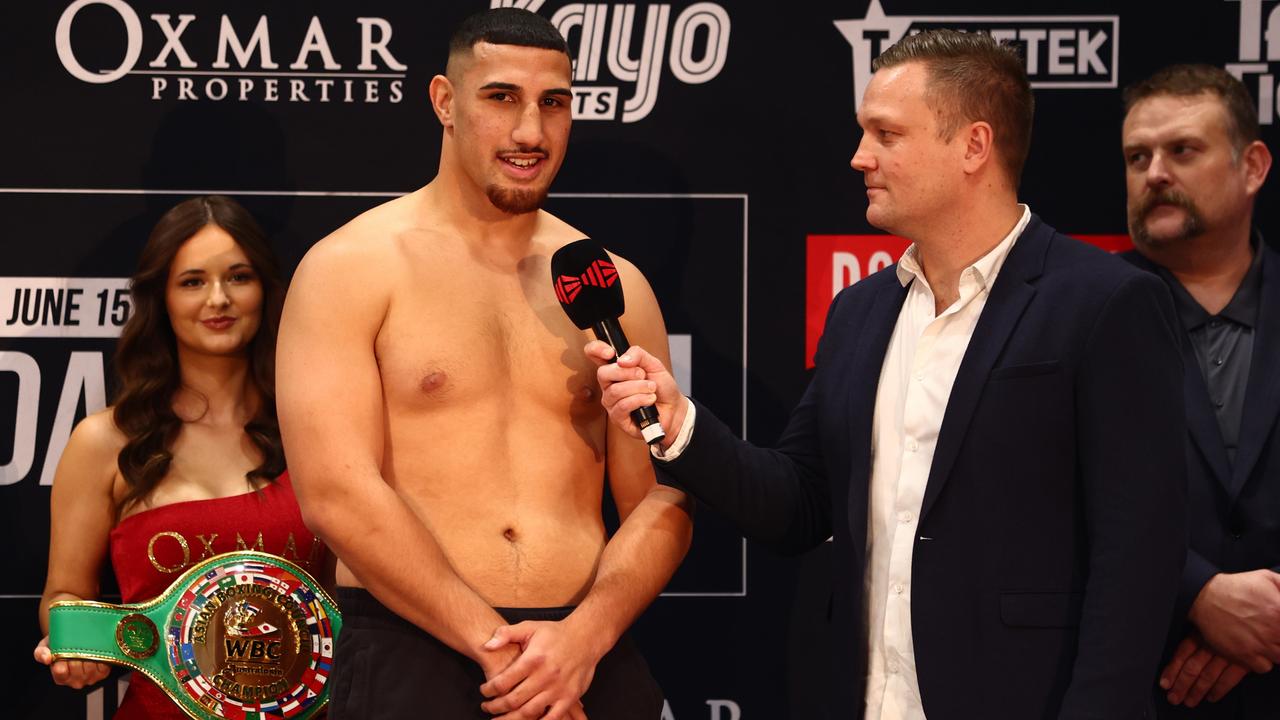 Justis Huni says his boxing ability will get him to where he needs to go.

“This will be a dirty fight, but Justis will be too fast and too good.”

The winner will become a world-ranked fighter and Goodall believes his 12-month stint in America has given him the edge.

At Tuesday’s weigh in, Goodall looked in better shape. His skin folds were lower, tipping the scales at 108.6kg to Huni’s 110.05kg.

“It’s a do-or-die fight. There is more on the line for me than there is for him,” Goodall said.

“We are both ready for a war. You can see there is tension and friction.

“We will see if he has world-class power. He will see a different fighter to the one he has sparred.

“He has the hype train around him, so there’s no pressure on me.

“I wouldn’t say he is the strongest heavyweight. I will leave it at that.”

Huni is bracing for an early onslaught from Goodall, who has produced six of his seven knockouts in the first round.

“We know he will try and come out and bang,” he said.

“But he knows I’m the better boxer out of the two of us. He will use some dirty tactics. If he wants to try and do that, I’m ready to go to war.”

Justis Huni is “special”, but there’s one thing that worries Jeff Fenech about the posterboy of Australian heavyweight boxing: he “can’t punch”.

After a year-long absence, the 23-year-old returns to the boxing ring on Wednesday night in Brisbane for the first time since his colossal 10-round slog against Paul Gallen in Sydney.

Standing in his way is his former sparring partner Joseph Goodall (8-0-1, 7KOs) who, after considering hanging up the gloves, shapes as Huni’s (5-0-0, 4KOs) greatest challenge yet after relocating to Las Vegas to work under 1984 Olympics silver medallist, Kevin Barry.

Stars in the amateur ranks, both men are undefeated since turning pro and victory at Nissan Arena will see one of the two put onto the world map by moving into the top 15 of the world in three of the four sanctioning bodies.

In other words, it will supercharge their hopes of boxing for a world title.

“Both boys as amateurs were amazing,” Fenech told foxsports.com.au.

“They did things that nobody else have ever done, so that on that scale and that scope it’s massive. It’s crazy.

“The amateurs, no disrespect, but they’re s---.

“But both guys have been able to turn pro and do some great things.”

For years Huni, whose hand speed is unrivalled, has been talked about as Australia’s next big thing. In fact, Barry, who led Joseph Parker to a world heavyweight title fight, wanted to sign Huni before eventually alerting his current promoter, Dean Lonergan, he could have his next world champion if he signed the teenager.

Yet, his power remains in question.

“I’ve got a huge rap on Justis Huni,” Fenech said. “He’s got great skills, but he can’t punch.

“If he could punch the amount of times he hit Paul Gallen they (the Goodall camp) wouldn’t be here. He’s not a puncher.

“They’re talking about teaching him to sit down on his punches, who’s teaching him? People (his father and trainer, Rocki) that have never had a fight in their life. “I think Justis is very special, but he needs a lot of help to go to the next level, you’ve got to sit on your punches.”

While Huni is a “true boxer”, Goodall is anything but orthodox.

He’s a slugger who has long been known for his heavy shots.

But after boxing injured for years to make ends meat, Goodall has spent the past year fine tuning his jab and footwork under Barry in the “mecca” of boxing.

“Joseph, he’s got a bit of an advantage being over there, not just with Kevin, but the sparring and the work you get over there is always better than what you get in Australia, so it’s going to be tough,” Fenech said.

While George Kambosos Jr. failed to take away Devin Haney’s jab and hand-speed, Fenech said Goodall needed to rough up his opponent to stand a chance.

“There’s only one way he surprises, Joe’s got to make Justis fight his fight,” he said.

“If you let Justis fight his own fight, I don’t think he’s hard to beat, I think he’s unbeatable.

“But if Joe puts pressure on him and takes that distance off him, keeps him going backwards, where he can’t set his feet and use that hand-speed of his, anything can happen.

“Can Joseph do it? That’s the question.

“If he’s doing everything right, he’s got a huge chance.”