An English cyclist has launched an astonishing spray at the Australian team after Georgia Baker sprinted away to capture gold in the road race.

It ended up being Georgia Baker who claimed the road race gold, her third of the Commonwealth Games after two on the track to join a very exclusive club.

The Australian team of Baker, Manly, Grace Brown, Brodie Chapman, Ruby Roseman-Gannon and Sarah Roy - who won the bronze medal - completely controlled the 112km race in Warwick to set up what ended up being an almost comfortable sprint by Baker to victory.

But the plan was as late as a day out from the race for Manly to be the main hope, only for Australia to find out that what they thought was going to be the finish line had been moved.

“The finish had actually changed to what we thought, before we arrived here,” Baker said.

“We previously thought that the finish would be across the bridge with another 300m to go. “So when we saw the finish our plan changed a bit and I think that shows the depth of our team and how much we trust each other that we a lot of girls can win.

“We were really controlled and really calm out there, we trusted everyone and when everyone plays their role something special can happen.”

Going for gold with Manly was still in the back pocket for Australia if the race went a different way to what they were predicting.

But despite England’s Anna Henderson attacking over 20 times in the first 50km of the race, it went as predicted for the Australians.

“It was a rubbish race,” she said.

“The Australians had a really boring race plan.

“I thought ‘you’re strong enough to win the race and be in the break and win the sprint’ so why don’t you race in the race.

“The Australians just played it really boring, didn’t really make a show of it.”

Baker said she was pleased that it went as planned.

“From the start of the race it was, if it went the way we thought it would and it would end up being a bunch sprint I would be sprinting,” Baker said. 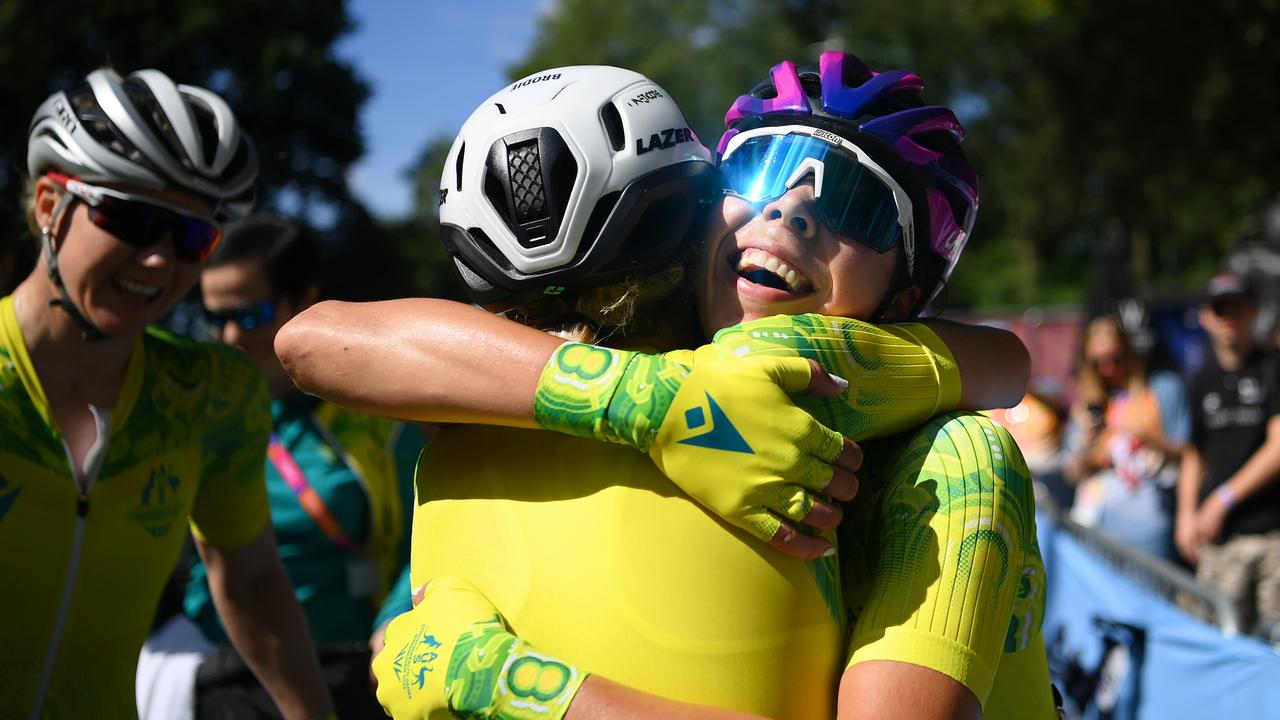 “But if it was going to be a really aggressive hard race and the other nations were going to make it super hard then potentially Alex Manly would be sprinting.

“We made a call about 20km to go out there on the road, I was feeling good and we stuck to the plan.”

It is Baker’s third gold of the games after being a part in the women’s team pursuit win and then taking out the points race on the track at the Lee Valley velodrome in London.

It means the 27-year-old is the first person since Australian cycling trailblazer Kathy Watt at the 1994 Commonwealth Games in the Canadian city of Victoria to win medals at the track and on the road at the same games.

“I think the way Australian cycling is going moving forward we should be able to do more of this with transitioning between the two and supporting your ambitions on the track and on the road,” Baker said. The team that helped Georgia Baker get to gold. Picture: Justin Setterfield/Getty Images

“To be honest it was the first time I’ve ever done this, it has been a whole new experience for me.”

Roy, 36, also competed on the track and said it was exciting for Australian female cyclists to have success in both.

“I think for women’s cycling we have seen so many track girls transition to the road and Georgia is one of them,” she said,

“Other nations have been quite successful at that but for Australia I think it has been a bit harder being so far away from the heart of cycling that is Europe but I think we are seeing the benefit of that and our federation are looking at ways to do this more.” New Zealand has wrecked Australia’s quest to complete a clean sweep of the road cycling program at the Commonwealth Games, despite a brave effort by young gun Luke Plapp.

Kiwi Aaron Gate won his fourth medal of this year’s games with a win in the road race to go with three medals at the track cycling.

After the shock withdrawal Caleb Ewan through injury Australia went into the flat course without a sprinter.

Plapp was part of a group that left the peloton, and pre-race favourite Mark Cavendish, in their wake with 113km to go of the 160km.

The group, which included Welsh star Geraint Thomas, went right to the wire with the Wales gun making his own move with 2km to go.

He was caught and then Plapp tried to sprint to victory in the final kilometre.

But he was caught by the rest of the group and Gate claimed the victory over South Africa’s Daryl Impey.