Ashes 2021: Australia on the verge of series win after Mitchell Starc and Scott Boland heroics

Just when it looked like England was back in the Ashes, Mitchell Starc and Scott Boland produced a performances for the ages to leave the Poms in tatters. A brilliant final session, headlined by wickets to Mitchell Starc and Scott Boland, has Australia on the verge of re-claiming the Ashes. Picture: Daniel Pockett/CA/Getty Images

Mitchell Starc and Scott Boland revived memories of Dennis Lillee at the Boxing Day Test with a blitz that has Australia on the verge of claiming the Ashes urn.

Under enormous pressure at the start of the series, Starc continued one of the most dominant campaigns of his Test career to fire with bat and ball late on day two to put England to the sword, after a day when James Anderson had fought his side back into the contest.

Only a Joe Root and Ben Stokes miracle – or a spate of positive test results in the England camp – can now stop Australia from rampaging to Ashes glory on day three with the decimated visitors to resume at 4-31 and still needing 51 just to make Australia bat again.

After calls for Starc (2-11) to be dropped for Jhye Richardson at the Gabba, the left-arm destroyer – the only Australian fast bowler to have played all three Tests – very nearly eclipsed his magic MCG moment of dismissing Brendon McCullum in the 2015 World Cup final when Root survived a hat-trick ball by the barest of margins.

But it was still shades of the great Lillee who, buoyed by a vocal Melbourne crowd, took down the West Indies in the 1981 Boxing Day Test by taking three wickets in the final half hour, including Sir Viv Richards off the very last ball of the day. Starc took the edge of England opener Zak Crawley to bring the 42,666 crowd to its feet, and then followed up by pinning Dawid Malan lbw with his very next ball to make him the 20th England batsman to fall for a duck this year.

The noise reached fever pitch as Starc thundered into bowl to England captain Root, and for a moment it looked hat-trick as the ball narrowly passed by the outside edge.

But while Root survived, home-town hero Boland (2-1) was only just warming up and took over from where Starc left off to have England opener Haseeb Hameed caught behind, and two balls later clean bowl Jack Leach to make the nightwatchman England’s 52nd duck of the year.

The trail of carnage and the eruption of the crowd was reminiscent of Mitchell Johnson‘s bulldozing heroics in 2013-14.

“It was absolutely bouncing. For 40,000 it felt like 100,000 and when Starcy was on a hat-trick,” said Marcus Harris, who earlier produced a gutsy 76 with his Test career on the line.

“When Scotty Boland ran down to Bay 13 … it was something you dream of as a kid to be part of. It was brilliant.” 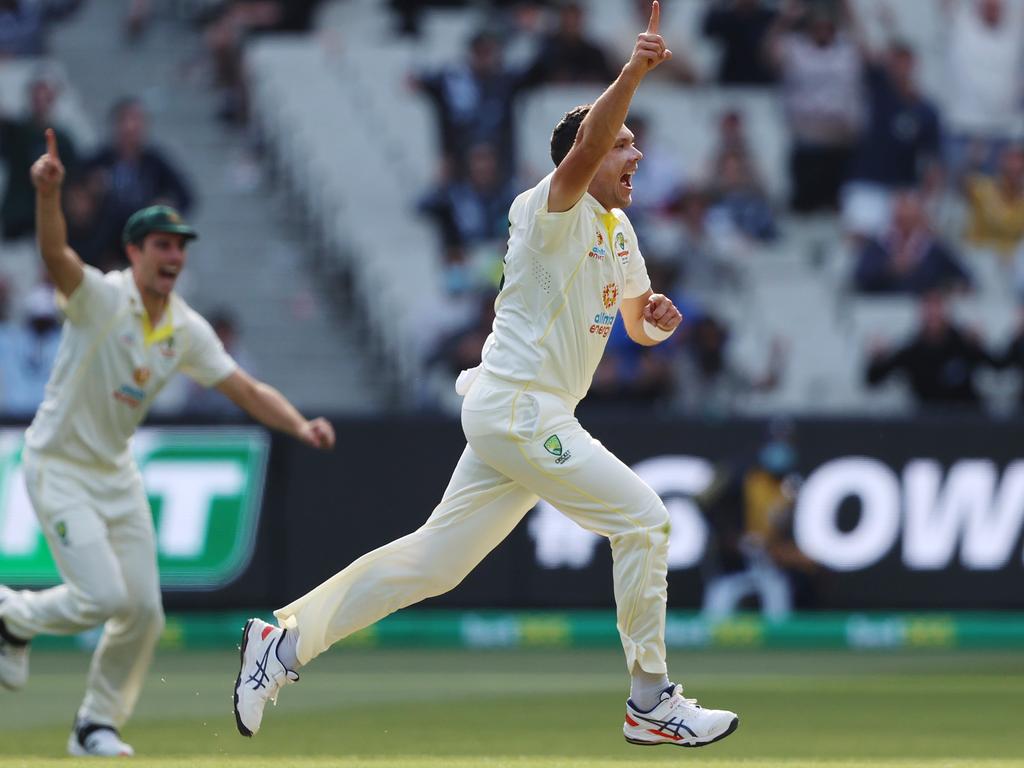 It was such chaos out in the middle, that Ben Stokes was very close to being timed out as he scrambled to get his pads on.

Before the nightmare final hour facing the music from Starc, Boland and Pat Cummins, it was looking like England’s best day of the series.

Defending just 185 from the first innings, Anderson (4-33) had outclassed Australia’s batting order and it looked like England could keep the deficit below 50 – a remarkable effort – until Starc and Cummins came to the crease wielding their willows.

Starc’s (24 not out) was vital in piling on another 48 runs for Australia and ensuring a more stable lead of 82 as the home side were dismissed for 267.

Anderson was flat after watching his efforts evaporate to nothing in the final hour.

“Yeah disappointing. Firstly on the bowling front I thought we did really well to stick at our task throughout the day,“ said Anderson.

“We were pretty pleased with 267. Again if we’re being honest in the first innings we should have got somewhere near that if not more.

“We knew that last 12 overs was going to be tough with the new ball. But even so, to lose four wickets was really disappointing.

“I thought the spell from Starc and Cummins was outstanding but that‘s what you expect. They’re world class bowlers. They’ve done it in Test cricket for many, many years, so it shouldn’t take anyone by surprise that they’ve bowled like that.” England still had a massive shot if they could just get to stumps with minimal damage, but Starc put paid to that in a summer where he is reborn.

Starc endured a horror last summer where his father was terminally ill during the Indian series and tragically passed away a short time later.

But Australian selectors and players rallied around the match-winner and were adamant he would spring back into this Ashes campaign as his old self.

England’s bravery with the ball was even more commendable given the COVID drama that had engulfed the camp before play.

Australia was in the box seat to virtually clinch the series on day two, before the batting order was completely outclassed by a world class display of swing bowling from 39-year-old Anderson.

The game’s new No.1 batsman Marnus Labuschagne was undone 1 – the first time he’s been out for less than 47 in a first innings since he was called in as Steve Smith’s concussion substitute in the 2019 Ashes.

Labuschagne’s leaving outside off stump helped him to a century in Adelaide, but the Australian star couldn’t help but prod one to slip off a superb Mark Wood delivery that suddenly had England charging back into the Test. 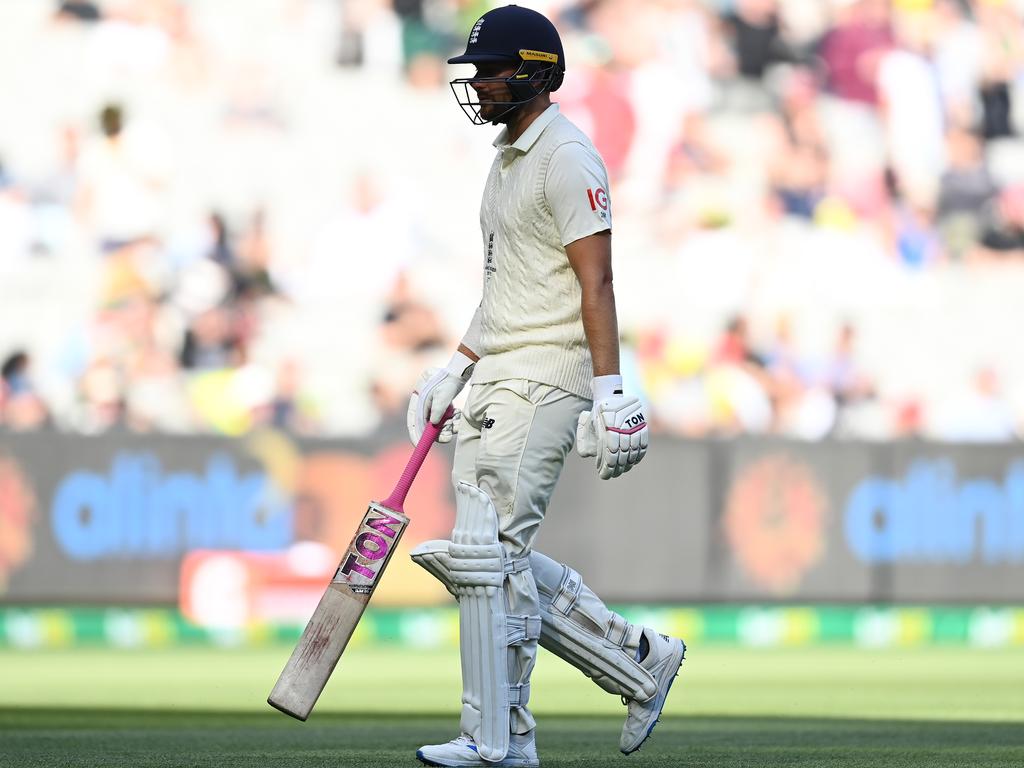 Anderson upped the ante a short time later when he blasted through Steve Smith’s (16) defences and Ollie Robinson did his bit as well to take care of nightwatchman Nathan Lyon early, and then danger man Travis Head for 27.

Harris ultimately became Harris’ third victim when he was caught sharply by England captain Joe Root at slip, and although his well-made 76 provided the backbone for Australia, it may not have been enough to safeguard his Test future beyond this series.

The left-handed opener is still chasing an elusive Test century from 13 matches, but at least in Melbourne he justified the faith of selectors when his team was on the ropes and desperate for a solid hand to show some fight.