Ashes: Steve Smith caps off a remarkable return to the captaincy with a perfect opening day in Adelaide

Comeback captain Steve Smith enjoyed an excellent day back at the helm as Marnus Labuschagne and David Warner put the hosts in a strong position in the day/night Ashes Test. Steve Smith’s day in the sun has arrived with the comeback captain gifted a golden chance to bat Australia to the brink of another Ashes after party as Marnus Labuschagne danced in the moonlight but silenced the chin music.

Smith (18 not-out) and Labuschagne (95 not-out) guided Australia to 2-221 at stumps on day one and the home team can now look to fry England in the sweltering 37C heat before getting the new pink ball into Mitchell Starc and Michael Neser’s hands to hoop around under the Friday night lights.

England invoked bodyline tactics as warrior Ben Stokes was given a licence to rattle Australia’s top order and go after Labuschagne with a bumper barrage that posed questions but were ultimately answered.

A sell-out crowd of 32,328 clapped their hands red as Smith walked out to face the pink ball as Test captain some 1363 days after the sandpaper scandal ripped his reputation to shreds in Cape Town. “Certainly they support Steve. I think we ran a really constructive thorough process for his reappointment as vice-captain and we’re just so fortunate we’ve got Steve ready to step up,” Hockley said.

After captain Pat Cummins shook hands with a Covid patient, which cost him a place in the iconic day-night Test, England attempted to test the patience of David Warner and Labuschagne by banging it in short.

But they ducked and weaved their way through the onslaught as Labuschagne crawled to 95 (275 balls) and became the third-fastest Aussie to 2000 Test runs (34 innings), behind only Donald Bradman (22) and Mike Hussey (33).

With the assistance of Jos Buttler, it was Labuschagne’s day.

The butter-fingered wicket-keeper put Labuschagne down on 21, a tough chance off Stokes, and again on 95, a silver-service sitter off Jimmy Anderson that will keep Buttler awake at night.

Labuschagne got jumpier and jumpier after the sunset but somehow hang on until stumps. 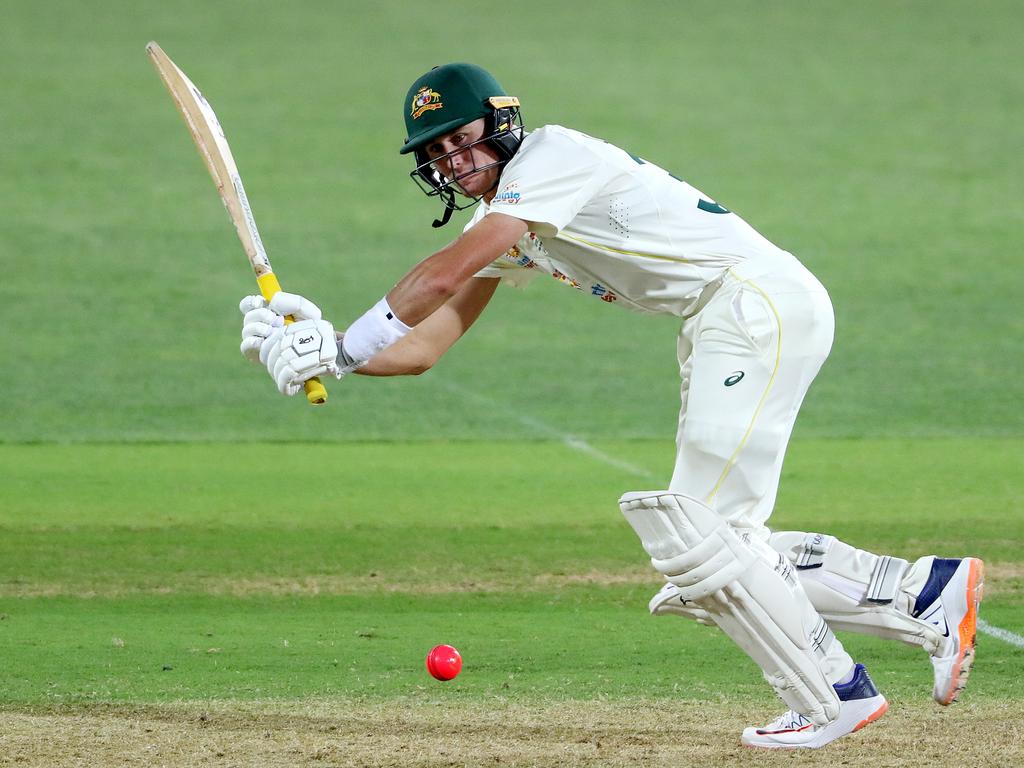 It was also Labuschagne’s week as he leapfrogged Smith as the ICC’s No.2 ranked batsman on the planet after the first Test.

Fast bowling great Brett Lee said Labuschagne looked like a completely different player when England went “upstairs” and the tactics dried up the run-machine’s scoring zones either side of the dinner break.

Labuschagne was given few loose deliveries to pounce on, but to his credit he was largely unfazed and even absorbed 36 consecutive balls without scoring.

He raised his hands and let one Stokes delivery cannon into his sternum before ducking out of the way of a 137km bouncer the very next ball.

Staggeringly, 95 per cent of deliveries from England’s seamers would’ve missed the stumps.

“Well played Marnus,” Labuschagne told himself after getting out of the way of another Stokes bouncer.

Importantly, Labuschagne survived, adjusted and then began to thrive as England’s tactics showed they have few answers to his bullet-proof batting.

“When you go away from (bowling at) the top of off (stump) it’s a good thing as a batter,” Labuschagne told Fox Cricket. Smith and Labuschagne will resume on day two with Australia at 2-221 Picture: Daniel Kalisz/Getty Images

Labuschagne refused to bite at the bumper treatment on a pitch that looked dryer than usual and Merv Hughes suspected was tough to score on but easy to bat on.

England’s slow over-rate in Brisbane meant it played for free, but $297,000 worth of fines hardly worked as a deterrent after captain Joe Root rolled out an all-out pace attack that unleashed bouncer after bouncer.

Not only did the bumper barrage in Adelaide fail to get England into the series, it was also delivered so sluggishly that it could once again cost players thousands of dollars.

Shane Warne wants the ICC to consider banning captains who dawdle in the field but England’s sluggish pace did cost them an over with the second new ball under lights.

Local boy Travis Head said playing a spinner in this Test was an absolute must but England dumped Jack Leach and again overlooked off-spinner Dom Bess, a surprising decision given Australia’s glut of left-handed batters.

Leach was never going to be overly effective at the Gabba, but the Adelaide Oval pitch does offer turn and bounce and the venue’s two leading wicket-takers of all-time are Shane Warne and Nathan Lyon.

Fielding an attack without a spinner also exacerbates England’s over-rate problem and forced Root to send down 11 overs, which was just one less than Stuart Broad with the first new ball.