England’s opening pair has yet to fire in four innings, with pressure mounting on their selectors to make a call. Here are our player ratings for both teams from the second Test.

Australia had to grind its way to victory in Adelaide despite dominating much of the second Test.

The Aussies’ victory was built off the dominance of David Warner, Marnus Labuschagne and Steve Smith with the bat, while Mitchell Starc again showed why he’s the master of the pink ball.

It was a sorry story for many of England’s players, although two batsmen in particular had forgettable Tests and will be under serious heat to keep their spot for Boxing Day.

Scroll down to see all of Andrew Capel’s player ratings. Marcus Harris struggles again at the top of the order.

Failed to cement his spot in the side after scores of 3 and 23. Looked good in the second innings, surviving a tricky session under lights, before nicking to wicketkeeper Jos Buttler from the seventh ball he faced on day four.

Fought off the pain of badly bruised ribs that had him in doubt for the Test to help set Australia on the road to victory with a crucial 95 in the first innings. Was run out for 13, leaving him furious, in a horror mix-up with Harris in the second innings. 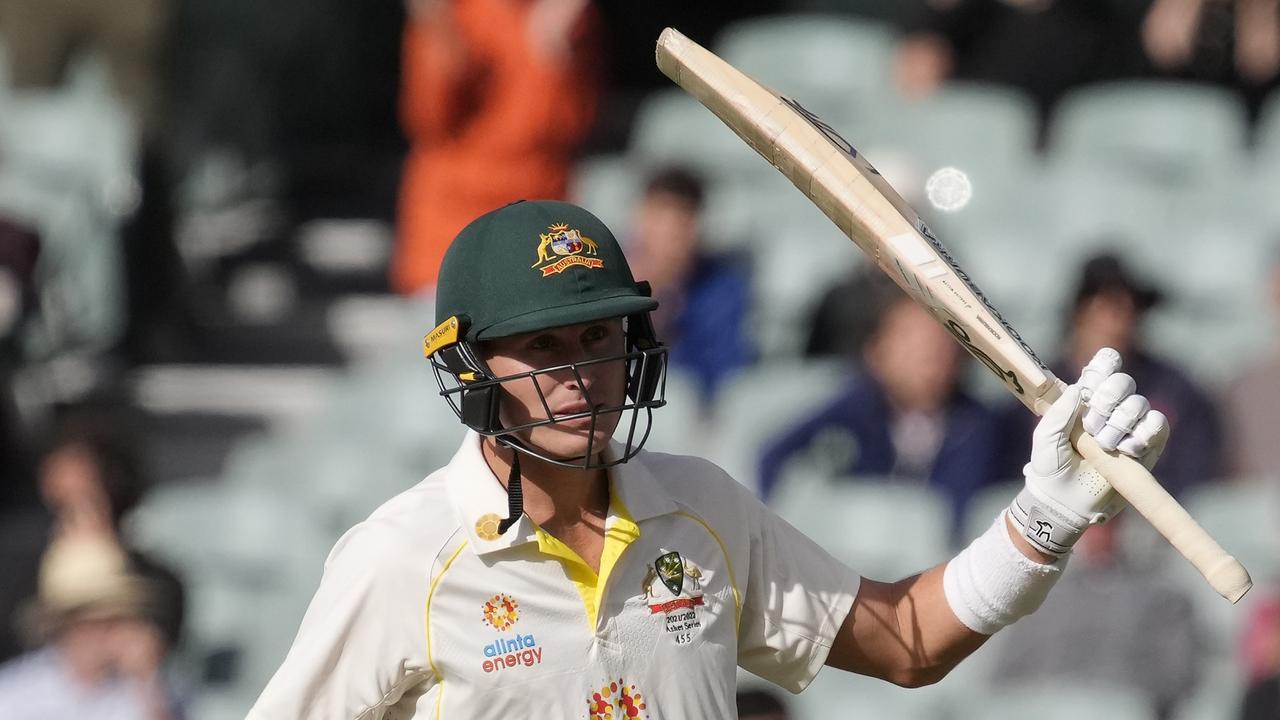 Rode his luck by twice being dropped by Buttler in the first innings (on 21 and 95) and surviving being given out leg before when Ollie Robinson was called for a no-ball before making the match’s only century (103). His 51 in the second dig capped off another terrific game for Australia’s Mr Reliable.

Back as captain after the late withdrawal of Pat Cummins (Covid-19 protocols), he made a patient, vital 93 in the first innings that helped shape the contest, despite having his share of luck. Never got going in the second innings, being dropped first ball by Buttler and then surviving an lbw review before being dismissed for six. Led well as skipper and had taken five catches in the slips by dinner on the final day.

Didn’t get the home Test hundred he desperately coveted but contributed strongly, which he says is his No. 1 goal this series, by making a quickfire 51 in the second innings. Looked on track for a century before being brilliantly caught on the boundary by a diving Ben Stokes.

After being bowled for two in the first innings, the Green Machine made a big impact with the ball, taking 2-24 off 10 overs, including the prized scalp of England captain Joe Root to start the collapse. His fast and aggressive bowling drew comparisons to former star England all-rounder Andrew Flintoff. Showed his class with the bat with an unbeaten 33 in the second dig.

Hometown wicketkeeper made his first Test fifty in only his second Test at an important time after Australia lost two quick wickets in the first innings, featuring in a 91-run partnership with Smith. Fell cheaply in the second innings going for quick runs. Gloved the ball well behind the stumps but was guilty of letting a Buttler edge sail past him when he should have taken it. Mitchell Starc showcased his prowess with the pink ball.

Superb all-round performance. The pink-ball king ripped through England’s batting with 4-37 in the first innings, becoming the first bowler to take 50 Test wickets with the pink ball. He then shook Root up late on day four before knocking him over with the final ball before stumps to virtually end the tourists resistance. Also displayed his batting prowess, making 58 for the match off only 59 balls.

Made the most of his long-awaited Test debut by getting a wicket (Haseeb Hameed) with his second ball. Illustrated his power with the bat by smashing 35 off only 24 deliveries in the first innings. Claimed the crucial wicket of Dawid Malan in the second innings in an encouraging debut.

Given his chance for the injured Josh Hazlewood, he captured his first Test wicket in 1050 days with a brute of a delivery that flicked Hameed’s gloves in the second innings. Then bowled Australia to victory, snaring five second-innings wickets including the key breakthroughs of Chris Woakes and Jos Buttler.

Bowled a lot of overs for his five wickets and struggled to deliver the knockout blow. Spun the ball sharply at times but didn’t rip through the England line-up as many expected on a pitch that gripped. His successful DRS referral for lbw against Stokes on the final day was crucial. Haseeb Hameed trudges off after being out cheaply.

Failed to back up his promising first Test – when he at least chewed up some balls – by making a total of only six in Adelaide, including a shocking shot which gifted Michael Neser his first Test wicket.

Looked certain to be dropped for the Boxing Day Test when he fell for four in the first innings, giving him a total of 17 runs in his first three innings of the series. Showed some grit by taking the first ball again at the start of the second innings – something he had relinquished – and battled hard for 34 off 95 balls without looking convincing. Arguable whether it will be enough to save him.

Followed his strong first Test with another excellent, fighting display in the first innings when he topscored with 80 before falling for 20 in the second dig. Also made a mark with the ball, snaring his first Test wickets (Marnus Labuschagne and Jhye Richardson) with his leg-spin bowling.

England’s skipper and best batter fought courageously in both innings, making 62 and 24, but was shaken up (hit in the groin) and then dismissed by Mitchell Starc at the end of day four, which broke his country’s heart. Took three wickets with his off-spin – equal-most of any England bowler in the match.

Fought hard in typical fashion, making 34 and 12 off a total of 175 balls, but with England’s backs to the wall in both innings he never got on top of the bowling. Took three wickets and a brilliant outfield catch to dismiss Travis Head. Ollie Pope is having a “nightmare” series.

Nightmare match, making only five and four and never looked comfortable. England needed him to show some resistance on the final day but he was knocked over in the third over.

Rarely has a wicketkeeper produced such a mixed bag. Spilled three chances, including two regulation ones, while also taking three excellent diving catches. Made a first innings duck and would have had a pair if Alex Carey had gobbled up his thick edge. Made the most of the life, showing great fight to soak up an incredible 207 balls in the second innings before being unluckily dismissed. Made no impact with the ball, finishing with match figures of 1-149, sparking calls for him to be replaced by the faster Mark Wood for the third Test at the MCG. However he showed some real ticker with the bat at No. 8.

Toiled hard like the rest of the England seamers without a lot of success. Cost himself Labuschagne’s wicket with a no-ball before exacting his revenge soon after. At one stage reverted to bowling off-spin after his side’s mistake in not picking a recognised spinner.

Like most of the England bowlers he pitched too short and paid the price. Had his moments but never looked particularly threatening and finished with 2-100 for the game. Smartly ran out David Warner.

Veteran star, like always, battled hard with the ball and was economical but didn’t produce the pink-ball swing expected of him. Desperately unlucky not to claim Labuschagne’s wicket in the first innings when Buttler dropped a sitter but took only three wickets off 39 overs.