Australia has made one change for the fourth Test against England at the SCG, as Scott Boland avoided going down as a one-match wonder.

Scott Boland has avoided going down as a one-Test wonder and has been backed in for a deserved chance to follow up his Boxing Day magic at the SCG.

Josh Hazlewood and Jhye Richardson weren’t able to convince selectors and medical staff of their fitness, and Boland will get a chance to impress again on a Sydney wicket where selectors believe his heavy-duty frame can prosper and take pressure off the other quicks.

Spinner Mitchell Swepson will have to wait until the overseas tour of Pakistan to get his long-awaited Test debut, with the form of the quicks and the inclement weather predicted in Sydney during the Test destroying his hopes of partnering Nathan Lyon as a second spinner.

Usman Khawaja coming in for the Covid-19-hit Travis Head is the only change to the Australian team from the side that routed England at the MCG.

“Scotty gets a go. Joshy Hazlewood had a few bowls and Jhye a bit similar, just not quite up to 100 per cent,” said captain Pat Cummins. 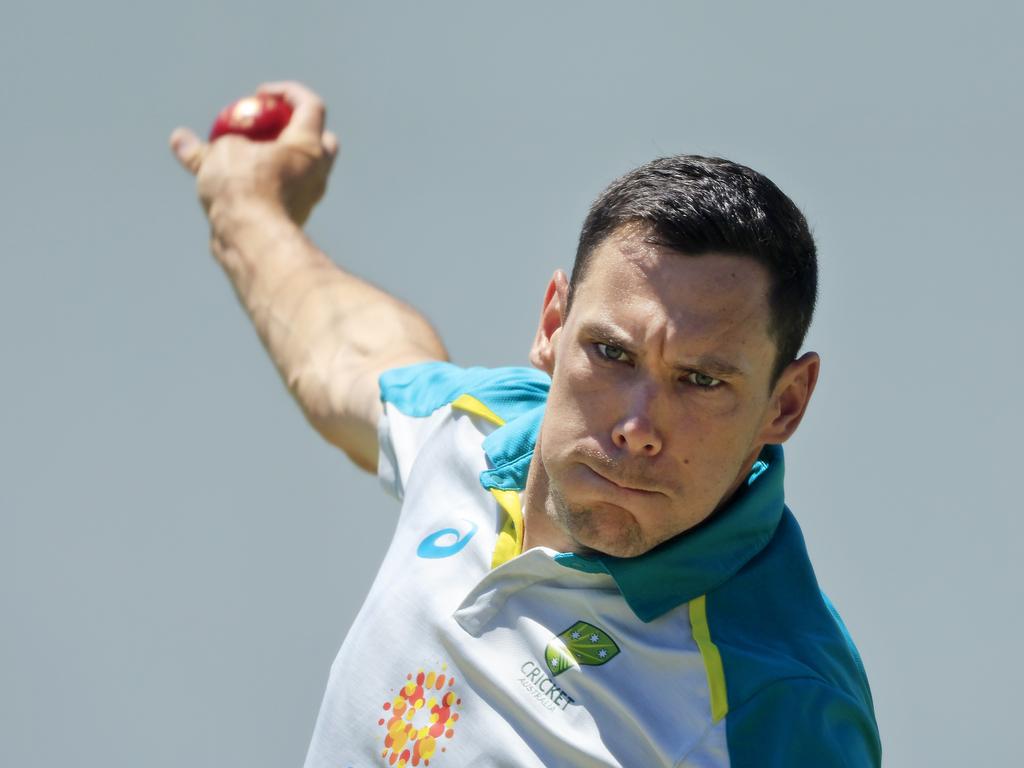 Scott Boland gets the chance to follow up his debut magic at the SCG. Picture: Mark Evans/Getty Images

“We gave Joshy every chance we could. We just felt he couldn’t quite bowl at full tilt yet. Still hoping he’ll be right for Hobart, we’re just giving him another week. Scotty comes straight in, excited.

“I think this wicket you’re not going to blast them out. There’s a little bit of grass on it but traditionally it’s hard work. It goes five days and you need that really physical and stump to stump bowler and that’s what Scotty brings to the table.”

In 2013-14 it was a one man show with Mitchell Johnson almost single-handedly decimating England with his record-breaking 37 wickets.

But this time around, the bowlers have found a similar level of intimidation and success but with more of a pack mentality, as Australia chase another whitewash.

“It’s probably been a bit more shared here, guys have bowled really well. Starcy (Mitchell Starc) has bowled well, Boland in Melbourne blew them away, Jhye got five in Adelaide. It’s been shared.”

Smith said the other key difference to 2013-14 clean-sweep was the SCG looks like presenting the first flatter pitch of the series — with Brisbane, Adelaide and Melbourne all bowler friendly surfaces with plenty of venom. That presents a new challenge for Australia’s bowlers, but despite an average record at the SCG Starc is again being backed to lead the charge in the determined push to send England home with another bagel.

“I think Starcy has just bowled exceptionally well throughout the series,” said Smith.

That presents a new challenge for Australia’s bowlers, but despite an average record at the SCG Starc is again being backed to lead the charge in the determined push to send England home with another bagel.

“I think Starcy has just bowled exceptionally well throughout the series,” said Smith.

“It’s been different in terms of the wickets. I think they’ve been pretty bowler friendly the first three.

“Whether this one might be a flatter I’m not sure, only time will tell. But it’s nice to have wrapped it up in three. It takes the pressure off us a little bit but we want to keep being relentless and ruthless and winning games of cricket.”