Australia‘s giant killer in the first innings was unsighted for the first 56 overs on Monday in what proved to be a tense finish — but there’s a good reason why.

Steve Smith defied dressing room orders to bowl Cameron Green out of desperation on Monday night as Jos Buttler threatened to deliver England one of the all-time great escapes in Adelaide.

Green emerged as Australia’s giant killer in the first innings as he knocked over captain Joe Root and warrior Ben Stokes in a double-strike that announced the boom kid as a force to be reckoned with.

But the 22-year-old was unsighted for the first 56 overs on Monday in what proved to be a tense finish to Australia’s 275-run Ashes victory.

After Green‘s first two deliveries Shane Warne declared the 198cm, 145km quick looked threatening and the most likely to finally put an end to a partnership that brought a miracle draw in sight for England.

But Green lasted just four overs in the attack, and was replaced by batsman Travis Head, despite Buttler and Ollie Robinson failing to hit him for any runs. His spell yielded 0-1 with the sole run coming from a rare no-ball.

“The guys inside actually said they didn’t want him to bowl at all today,” Smith said. 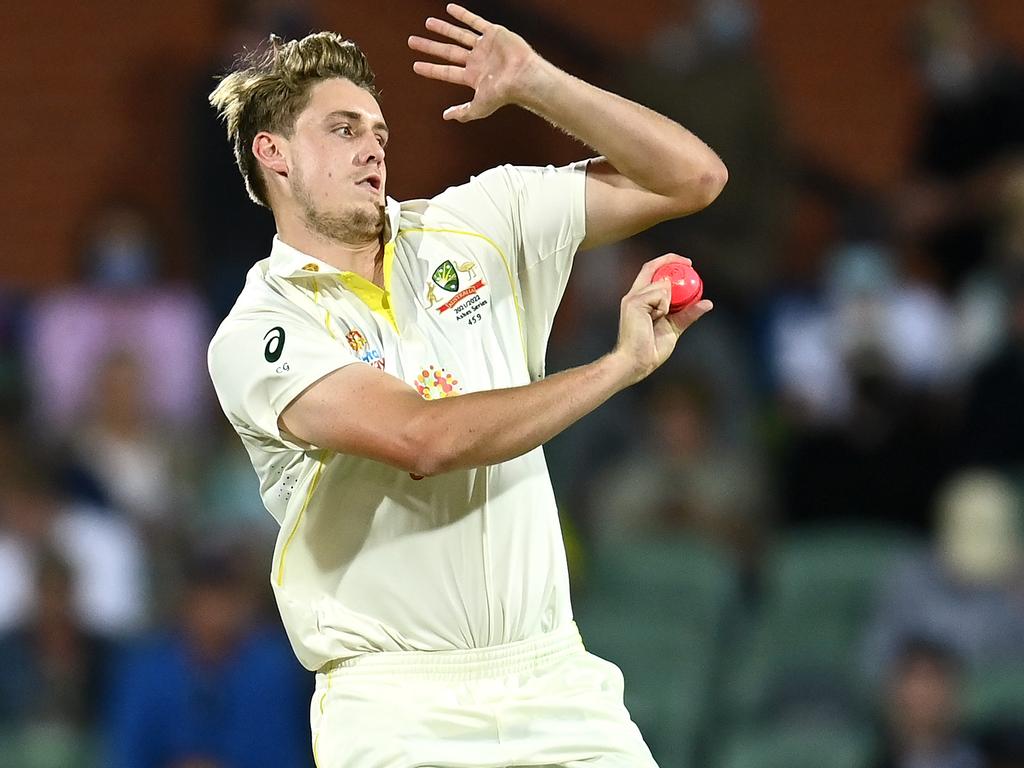 “I was kind of trying to manage his workload as much as possible.

“We’ve got to remember he’s still a young kid and he’s bowled the last two days and it’s a long series and it’s a pretty close game, Boxing Day.

“I held him back for as long as I could and then I wanted to have a little crack with him.

“I thought he might’ve been able to get that breakthrough for us when they had that partnership going.

“Ideally he wouldn’t have bowled today.”

Green is regarded as one of the most precious assets in Australian cricket and it is hoped that by treating him with kid gloves the West Australian will evolve into a superstar at Test level for at least the next decade.

Former captain Tim Paine was under similar orders last summer, with Green yet to bowl more than 13 overs in a single innings.

Smith heaped praise on Mitchell Starc, who led the attack brilliantly in the absence of skipper Pat Cummins.

Smith said Starc’s (2-43) line and lengths were “exceptional” and he adjusted early after figuring out there was little swing on offer.

“He was just trying to bash a good length in particular and just hit good areas,” Smith said.

“He did that as well as I’ve seen him do throughout his whole career.” 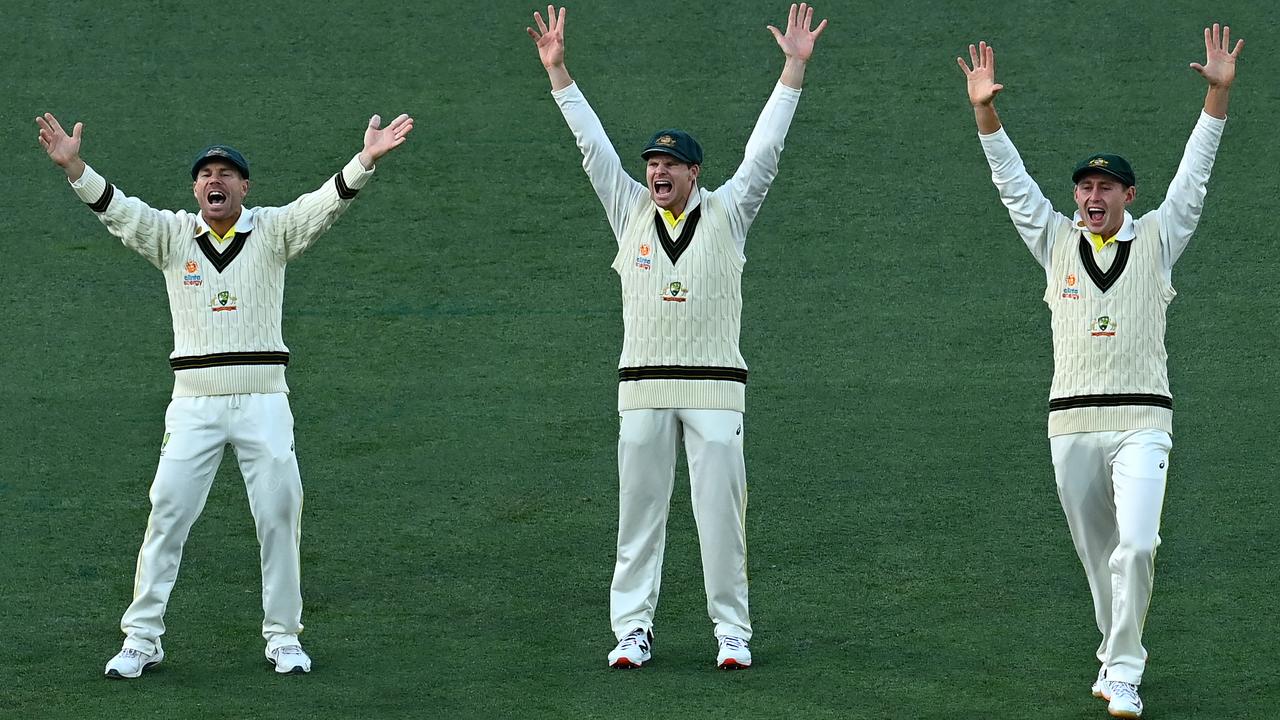 Steve Smith’s return to captaincy was a strong showing. He enjoyed great support from his teammates in the role. Picture: Quinn Rooney/Getty Images

Steve Smith savoured his first win as captain for 1386 days, as he lauded Mitchell Starc and Jhye Richardson for helping pilot Australia to the verge of Ashes glory.

Australia took a crucial 2-0 Ashes series lead, but not before comeback quick Richardson had to break through a brick wall no one saw coming in a superb five-wicket haul in his first Test in nearly three years.

England wicketkeeper Jos Buttler (26 off 207 balls) defied his record as a former white ball specialist and dug in for the gutsiest innings of his life, only to inexplicably step back on his stumps to fall hit wicket to Richardson with 24 overs left to survive.

Despite England’s fight and some anxious moments for Smith, Australia ran out emphatic 275-run winners and history now says they are in an almost untouchable position to clinch the Ashes, with Don Bradman’s Invincibles in 1936-37 the last outfit to fight back from two Tests down and win.

Smith missed two phone calls from Pat Cummins on the first morning of the Test before he finally realised he was about to return to the role that was taken off him after the Sandpapergate scandal in 2018 – and relished guiding Australia to a famous win without its skipper and best bowler. 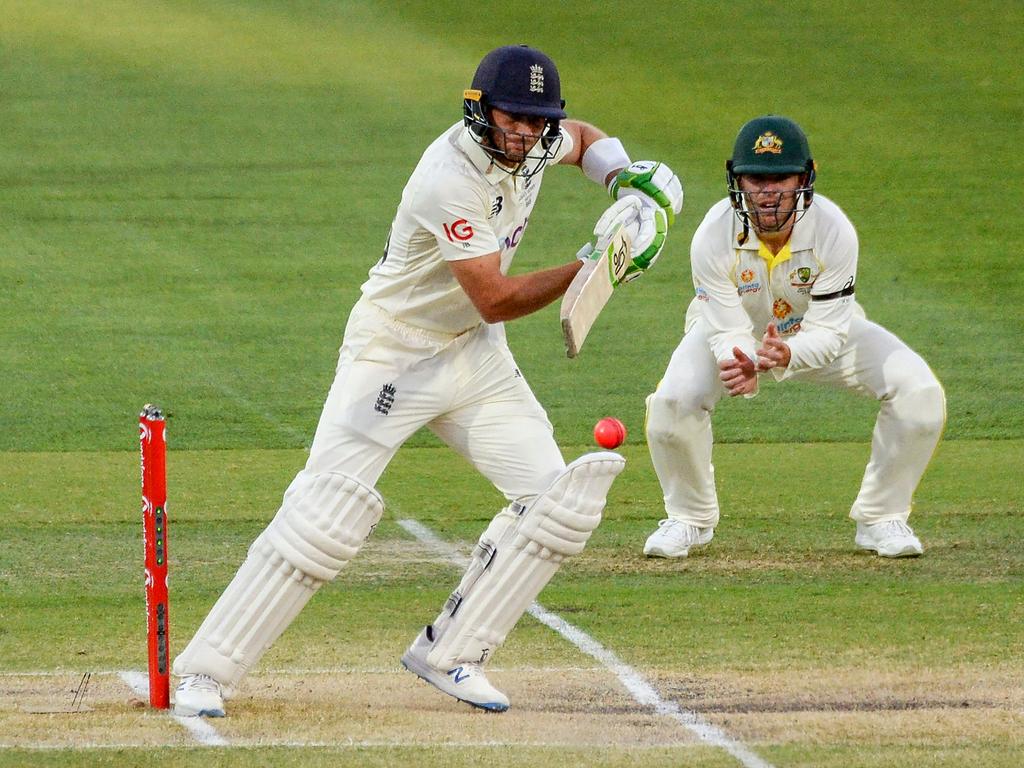 “I only found out first thing in the morning when I had two missed calls from Pat and a message from JL saying, ‘are you awake?’ I thought, ‘there’s something going on here,’” said Smith.

“I enjoyed it. It brought back some old memories in a way and I had fun out there.

“But it’s Patty’s team and I’m the vice-captain and I’ll help him any way I can.”

Smith admits Australia are daring to dream of another 5-0 whitewash, as the stand-in captain went out of his way to praise Starc – the man put under such intense pressure leading into the series – who stood up as the leader of the attack in the absence of Cummins and Josh Hazlewood in a defining performance in his career.

“We’d love to wrap it up in Melbourne … we bowled exceptionally well, led by Mitchell Starc. It was the best I’ve seen him bowl in a while. He summed up conditions, realised it wasn’t swinging and was able to hit really nice line and length and did it all game. He led the attack exceptionally well.”

No one would have been more relieved than Alex Carey, who made his first blunder as Australian wicketkeeper when Buttler was 0, although overall Australia were superb and England captain Joe Root is dealing with an unfolding crisis that Buttler’s innings can’t erase.

Only once before in his 55-match Test career has Buttler faced more balls than his 207 he bravely kept out to push the second Test into the final session when most felt it would be wrapped up by dinner. England were still a long way from the finish line, but for Buttler to become just the third batsman in the history of Tests at Adelaide Oval to be out hit wicket was a cruel way for the morale-boosting rescue mission to end.

Buttler’s fighting effort turned what seemed a dead Test into a majestic struggle and reinforced yet again the glory of Ashes cricket – before Richardson, in his first match back from a shoulder reconstruction 18 months ago produced a moment to relaunch his career.

After England pushed the match into the final session with two wickets in hand, Richardson struck the killer blow, claiming Buttler and then the final wicket of James Anderson in quick succession.

“I wasn’t getting nervous just yet,” said Smith.

“Richo has obviously been out for a while, he had some setbacks with injuries. All I’ve heard the last little while is how well Jhye is bowling. His skills and what he can bring to the table.

“He’s more skiddy than the other quicks so he complements them nicely. He’ll take a lot out of that.”

Australian wicketkeeper Carey had been close to flawless in his first two Tests, but gave Buttler a life on 0 which would have turned his stomach in knots the longer the day went.

Buttler edged one off Mitchell Starc at the very start of his innings, only for Carey to watch it sail between he and his first slip David Warner – when it was clearly a catch for the gloveman to pounce on. 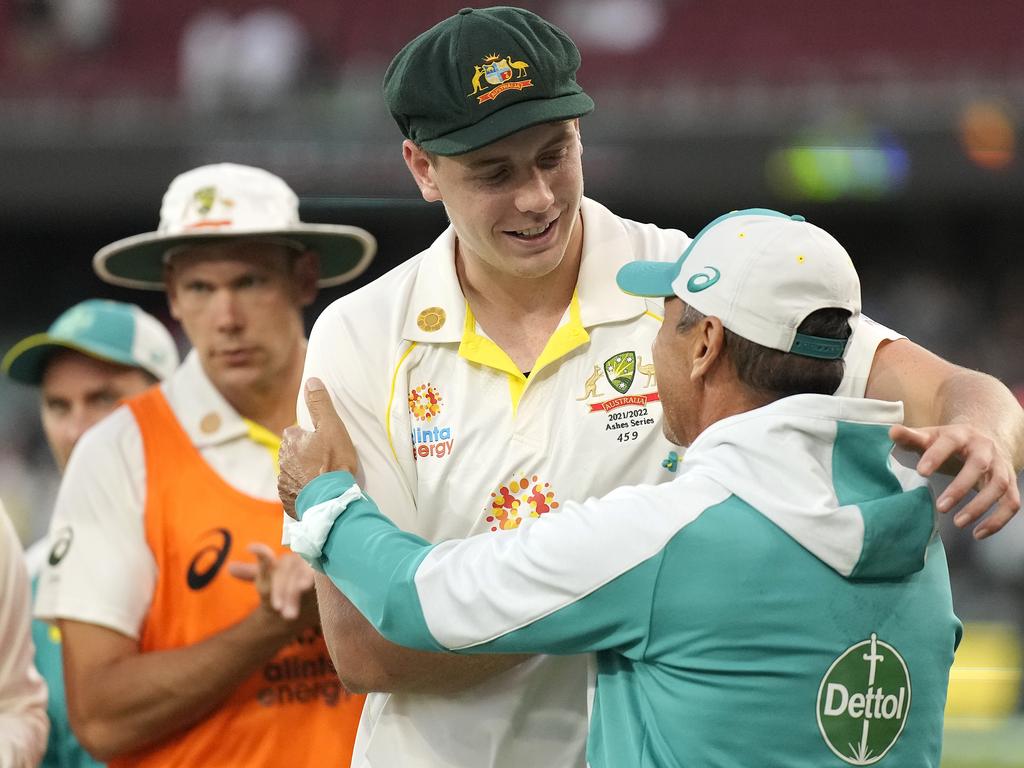 Richardson delivered a performance to remember in his first Test since he badly dislocated his shoulder back in 2019 – costing him the World Cup and Ashes that year and, potentially his entire career.

But after a reconstruction 18 months ago, Richardson has announced himself as a certified Test star.

Richardson recorded figures of 0-78 in the first innings, but in an incredible turnaround, took 5-42 in the second innings including the clutch wickets of Buttler and Chris Woakes (44 off 97) who had combined for a partnership which threatened to pull off a miracle.

Smith also heaped praise on Starc, who led the attack brilliantly in the absence of skipper Pat Cummins.

Smith said Starc’s (2-43) line and lengths were “exceptional” and he adjusted early after figuring out there was little swing on offer.

“He was just trying to bash a good length in particular and just hit good areas,” Smith said.

“He did that as well as I’ve seen him do throughout his whole career.”

It was a stirring effort overall from Australia’s bowlers who were without captain Pat Cummins and Josh Hazlewood.