As the leader of the Australian team song, Nathan Lyon is also the heartbeat of the Test team. He’s had his say on the scandal that cost Tim Paine captaincy ahead of the Ashes. 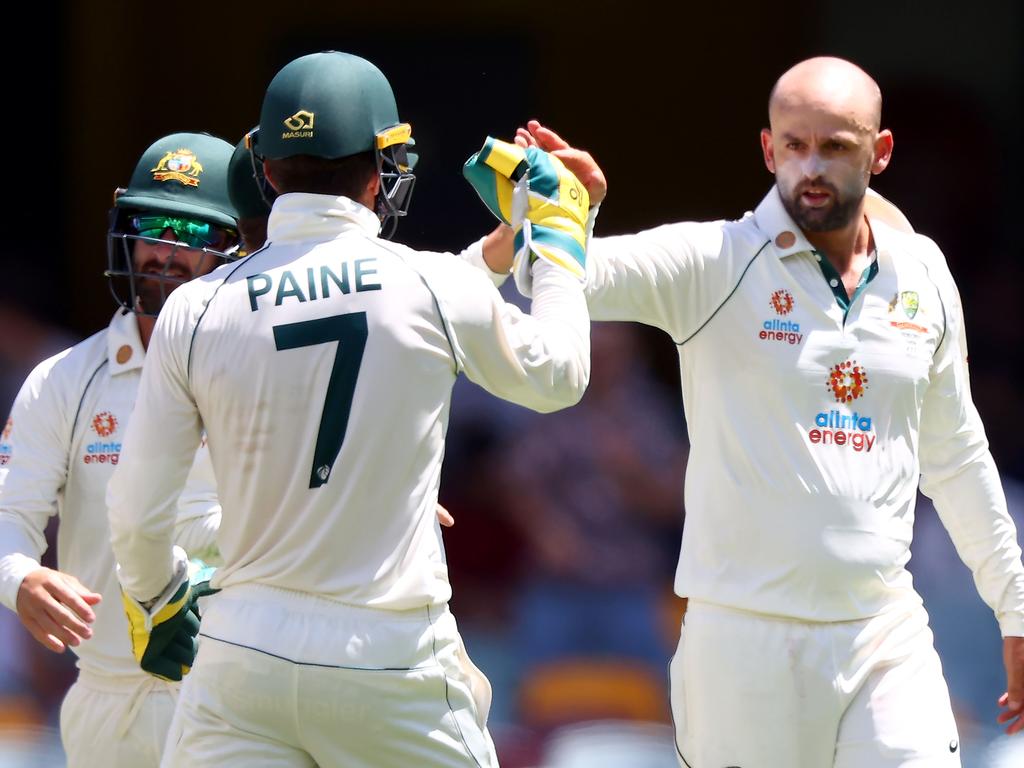 Nathan Lyon is just one wicket away from 400 Test scalps and he believes Tim Paine should be the man behind the stumps when he brings up the milestone. Picture: Patrick Hamilton/AFP

Test spinner Nathan Lyon has declared the presence of former captain Tim Paine won’t be a distraction in the build-up to the Ashes and demanded he play because he’s the “best gloveman in the world”.

Lyon said Paine, who quit the captaincy last week in the wake of his sexting scandal, had “100 per cent” support in the Australian dressing room as he prepared to join his Test teammates in Queensland following a final hitout for Tasmania on Friday.

Needing just one more wicket to reach 400 Test scalps, Lyon said the mood in Australian cricket was “incredible” on the back of victory at the T20 World Cup and it would not be altered by the tumult surrounding Paine.

“In my eyes Tim is the best gloveman in the country, in the world,” Lyon said on Thursday, less than two weeks out from the opening Test at the Gabba.

“I can 100 per cent guarantee he has the full support of the Australian changeroom. I don’t see him as a distraction at all. Come the Gabba Test match and throughout the whole series, we are professional sportspeople and we will go out and do our job.

“Tim made a mistake, he’s owned it, for me that shows great courage to be honest. Tim has got my full support. I am looking forward to catching up as soon as we get out of quarantine.

“The selectors said they were going to pick the best available XI and in my eyes Tim Paine is the best keeper in the world. I want him. This is very selfish, from a bowler’s point of view, I want the best gloveman behind the stumps.” Lyon and Paine have played in 31 Tests together but didn’t combine for a single wicket in last summer’s series loss to India.

Earlier this week Paine played his first match since April, and serious neck surgery in September, in a second XI game for Tasmania, taking six catches as evidence his keeping at least is back to its best,

Lyon said going into a series as big as the Ashes, that was the most important thing from his perspective because bowlers want the best keeper working for them.

“Everyone will say you look at the movement around catching the ball, but I go off the sound of the ball hitting the gloves,” he said,

“If you actually listed to the sound it makes, that’s when you can tell someone is a decent keeper. I noticed that with Brad Haddin, but Tim Paine, it’s music to my ears.

Lyon said he was “excited” that long-time state and Australian teammate Pat Cummins could be named Paine’s replacement as captain. Cummins and Steve Smith were interviewed by Cricket Australia on Wednesday amid growing speculation they will be confirmed as captain and vice-captain respectively.

“You have a bowler’s mindset and a batter’s mindset rather than two batters; they can come together and really come up with some good guidance,” Lyon said.

“I am excited by the fact we are potentially going to have a bowler as captain.”

Lyon was adamant there was a palpable buzz around the Australian team despite the upheaval around Paine.

“The mood is incredible,” he said.

“On the back of the boys winning the World Cup, there are only nine guys here who were part of that, but the staff too, there is an unbelievable feeling in the Australian cricket changerooms right now.

“Our preparation is flying along. I’m ready to go. We’re feeling extremely confident going into a pretty amazing summer.” When new Aussie skipper Pat Cummins walks onto the Gabba for the coin toss on Wednesday, he will have the words of Mark Taylor and Allan Border ringing in his ears. Cricket Australia has finally made a concrete decision on the fifth Ashes Test in Perth amid ongoing concern with Western Australia’s border restrictions. The West Australian government has launched an astonishing bid to swap its Test dates after being told the fifth Test in Perth has been scrapped, only for SACA to put their foot down. Criticism has followed Steve Smith around the globe - but the Australian vice-captain says it doesn’t get to him anymore. He opens up about his new-found maturity. MIKE ATHERTON explores why fast bowlers have generally been overlooked for captaincy and how Australian paceman Pat Cummins must redefine the role this Ashes series, defying the wisdom of a renowned England skipper. Buchanan vs Langer: The big interview

In a CODE exclusive, former Australian coach John Buchanan speaks to current coach Justin Langer about the pressures and challenges of a home Ashes series.