Australia will be homing in on a T20 series whitewash after extending its winning streak over Sri Lanka when the visitors couldn’t repel a late batting revival by the Aussies.

Australia’s domination of Sri Lanka in their Twenty20 series continued on Friday night with the hosts seeing off the tourists by six wickets in front of a paltry crowd of 13,175 at the MCG.

Not content with their unassailable lead of the best-of-five series achieved on Tuesday night in Canberra, the world champions increased their advantage to 4-0 and now have a whitewash firmly in their sights after extending their overall winning streak to eight matches.

Australia didn’t have it all their own way, though, and the blistering pace of Lahiru Kumara (2-22 from four overs) in particular pinned the hosts down early in their run chase, restricting them to 3-50 and just two fours after nine overs, chasing 140 for victory. But the Aussies’ mini crisis brought power hitters Glenn Maxwell (48 not out off 39 balls) and Josh Inglis (40 off 20) together, and the star duo ensured there would be no upset result, combining for 71 runs for the fourth wicket to ease their country to 4-143 with 11 balls to spare.

While the explosive Maxwell was content to play the anchor role, waiting 26 balls for his first four, Inglis was the aggressor, smashing three fours and two sixes.

Although Inglis did have a lucky escape in the 12th over when, on 19, he hit Jeffrey Vandersay down the ground for six. Dushmantha Chameera actually took the catch, however he jumped over the rope in the process.

After winning the toss and electing to bowl first, Australia’s bowlers were also put under the pump initially by Sri Lanka, which made its best start to an innings all series, reaching 1-76 in the 11th over. Josh Inglis was solid again for Australia at the top of the order with 44 runs. Picture: Getty Images

But just as they looked set to post a competitive total, the wheels fell off stunningly as they lost 7-46, including 6-12 in 20 balls, before crawling to 8-139.

Jhye Richardson (2-20 from four), playing his first T20 international in almost a year, and Ashton Agar (1-14 from four) were outstanding for Australia, while Kane Richardson (2-44 from four) was also a multiple wicket-taker, but was very expensive and conceded 17 runs off the final over.

The leading run scorer of the series Pathum Nissanka continued his impressive form line, top-scoring again for the visitors with 46 off 40, including four boundaries, but struggled to find meaningful contributions from his teammates.

The momentum changed in the 11th over of Sri Lanka’s innings when Maxwell ran out the diving Kusal Mendis (27 off 21) well short of the crease with a spectacular direct hit from mid-on charging in from outside the circle as the Sri Lankan No.3 desperately came back for an ill-advised second run. 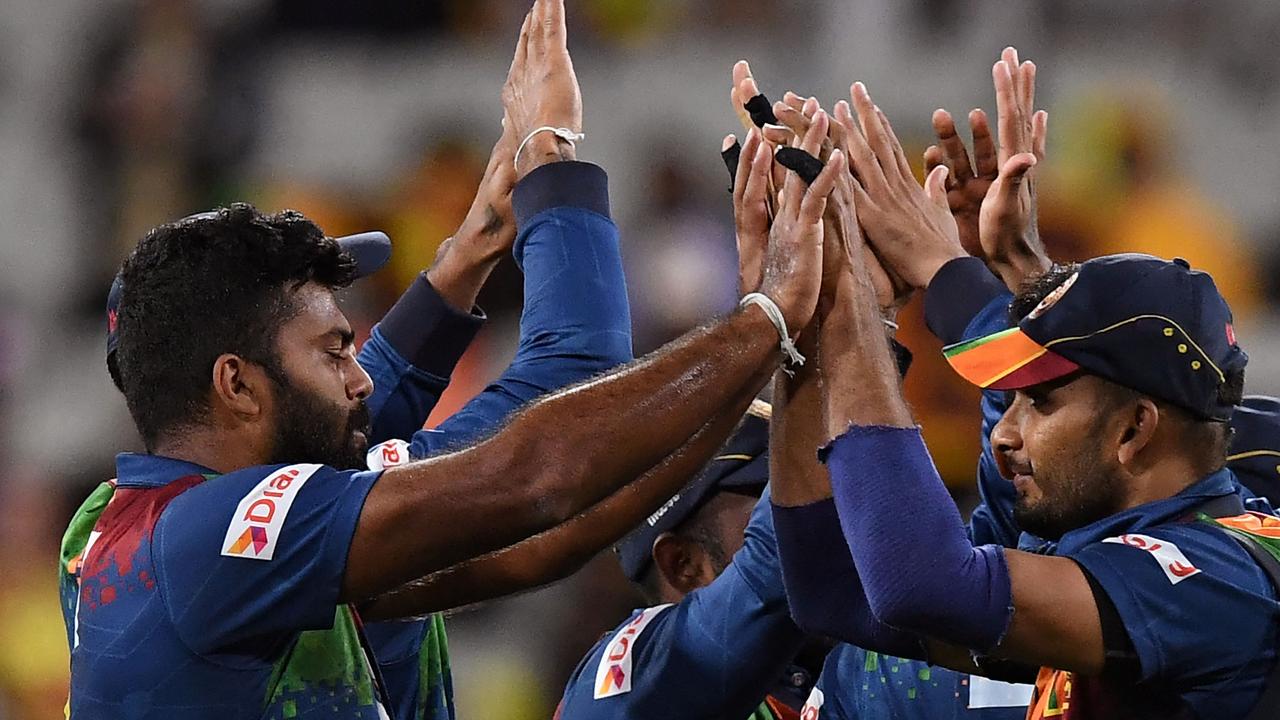 Another brilliant run out occurred in the 19th over of Sri Lanka’s dig after a horrible mix-up between Maheesh Theekshana and Chamika Karunaratne saw them both end up at the bowler’s end. Aaron Finch’s throw to the keeper’s end from mid-off was way off line, but Matthew Wade athletically charged towards the bouncing ball and threw it back at the stumps while diving forward to send Theekshana packing in sensational style. Australia’s experimentation with the top order continued, with mixed results. Agar didn’t really give his country what they needed as an opener, scoring a pedestrian 26 off 31, and the knock-on effect saw Finch make just two coming in at first drop. Ben McDermott’s struggles since making a half-century in the first game also continued, making only nine off 10 to back up scores of 18 and a golden duck.