David Warner’s leadership ban — a result of the sandpapergate saga — continues to hurt the struggling BBL. The time for change is now, writes Ben Horne, otherwise the future could be bleak.

Cricket Australia must decide; how badly does it really want to save the Big Bash?

If the answer is – ‘very much’ – it’s time to end David Warner’s leadership ban.

The lifetime banishment from ever captaining a team again at any level of cricket in Australia for his role in Sandpapergate never made much sense at the beginning, and it makes even less sense now with the BBL so desperate to get its national stars playing.

Of all the Australian Test players who could inject life and profile into the BBL, Warner is at the top of the list and should be the No. 1 priority. If Cricket Australia is serious about saving the BBL, they must consider reversing the leadership ban on David Warner. Picture: Getty Images.

If his status as one of the greatest T20 players in history isn’t enough of a reason to act, consider these two factors:

As a batsman, he’s not beholden to the workload management issues that will be a perennial obstacle for the fast bowlers Pat Cummins, Mitchell Starc and Josh Hazlewood off the back of a Test summer.

And the biggest upside is Warner may only have 12-24 months left in Test cricket before retirement and therefore could be more than a cameo option for the BBL by the time the next TV rights deal kicks-in.

But of course the flip side to that is if Warner is retired, he can’t be bound by Cricket Australia’s plans to write it into the contracts of players that the big stars must play in the BBL.

Therefore, it’s up to CA to make the running on this simmering issue and abolish the Warner leadership ban.

Senior voices are pushing for it and they have a point. Forgiveness and redemption are as important in sport as strong action. 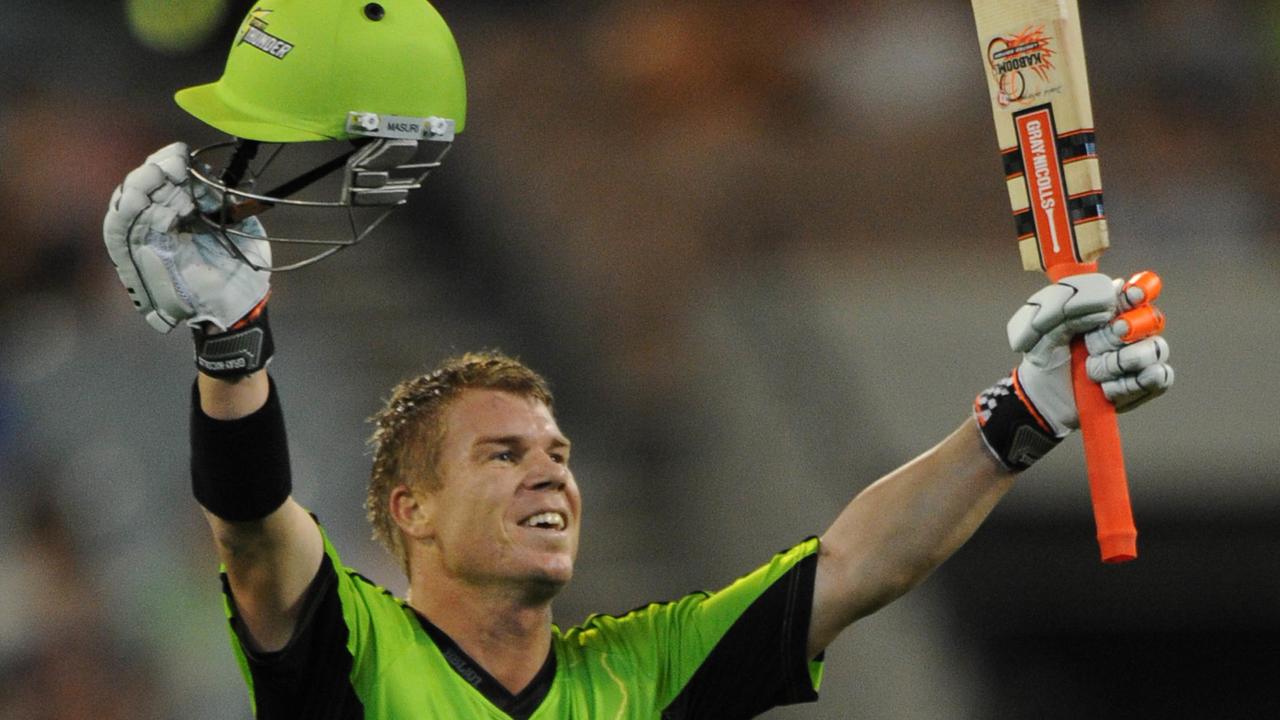 Of all the players who could breathe life back into the BBL Warner is at the top of the list. Picture: AAP.

“For the BBL to be the best competition it can be, you need the best players playing,” says Australian Cricketers Association boss, Todd Greenberg.

“It’s a simple premise, but it’s true for a couple of reasons.

“One, people want to see the best players playing, and two, if you want to develop talent you have to be playing with and against the very best.

“David is one of the very best. He would provide the BBL with a massive shot in the arm and attract people to the game – be it through the turnstiles or in front of their television.

“Not only that, but he now has so much more to offer, having demonstrated his value as a leader by captaining teams in overseas leagues.

“We’d all love to see David back, but his leadership ban is an impediment to that. We now have a situation where four years on, the ban is counter-productive – it denies Australian cricket the opportunity to benefit from David’s experience, which includes the hard lessons learned along the way.” The BBL would benefit from a player with the experience of David Warner. Picture: AFP.

Steve Smith has been welcomed back as Australian Test vice-captain, and if everyone else from the sorry Sandpapergate episode has served their time, surely it’s time to also relieve Warner of this lingering millstone.

Warner will never captain Australia again, but the game could only benefit from a player of his experience and ability leading a Big Bash team into his cricketing twilight.

Ending the ban wouldn’t guarantee Warner returns to the BBL, but CA must at least try and extend the olive branch and empower the 35-year-old to feel needed and wanted by Australian cricket.

It’s the right thing to do, not to mention the smart thing to do for a competition which desperately needs to start kicking some goals before it’s too late.

Where to next? One BBL club already out of Lynn raceCA’s dilemma: How do you make someone turn down $2 million?

At Shane Warne’s funeral it was explained how invested the King of Spin was in representing the Melbourne Stars in the Big Bash, because he wanted his kids, his family and his friends to have the chance to watch him play after years of travelling on the overseas circuit – and to be able to impart his knowledge to the next generation.

It should be Cricket Australia’s mission to make Warner see the opportunity for a BBL curtain call to his stellar career the same way.