Building team value is the secret to any great KFC SuperCoach team. Here are 11 BBL players set to make big money this week to consider for your side.

The early rounds of any KFC SuperCoach season are all about building your team value.

Every team starts with a $2 million salary cap, but player prices change every round. If players score above their break even, their price rises.

If they score less than their break even, their price drops. You get the idea.

The quickest way to build your bank is to jump on ‘cash cows’, players with low break evens or negative break evens who are projected to make money in coming rounds.

A break even refers to the score a player needs to maintain their price. For example, a player with a break even of 20 would stay at the same price if they scored 20. Score above that and they make money. Anything less and their value drops.

Here are five players projected to jump in value in the next two rounds, according to SuperCoach Plus stats.

TRADE GUIDE: SEE THE BEST TRADE TARGETS OF THE WEEK Moises Henriques was the top KFC SuperCoach scorer in Round 1.

The 10 per cent of KFC SuperCoach teams who paid more than $170k for the Sixers skipper were rewarded handsomely in Round 1 with scores of 111 and 103. Henriques was the No. 1 ranked player in Round 1 thanks to scores of 76 not out (38 balls) and 73 (48). There was a fair bit of fortune in the second knock – Henriques given not out early in his innings after being trapped in front by part-timer Tim David. But no KFC SuperCoach BBL prospers without some luck. Henriques’ price jumped to $196k after Round 1 and he is projected to be about $230k after Round 3. That will make him one of the most expensive players in KFC SuperCoach. Matt Short tees off against the Renegades in Round 1.

Short was one of the stars of the opening round in KFC SuperCoach, collecting a caught and bowled (30 points), two catches (20 points) and making 29 from 18 balls opening the batting alongside Jake Weatherald. A couple of towering sixes he launched onto the second tier of Marvel Stadium suggested Short has a point to prove this summer. The Strikers won’t be able to call on Alex Carey or Travis Head for much of the summer and Short will be one of the beneficiaries. His price went up from $62k to $83k after Round 1 and Short is projected to be about $110k after a Round 2 double for the Strikers. Adelaide faces the Renegades and Scorchers in Round 2. 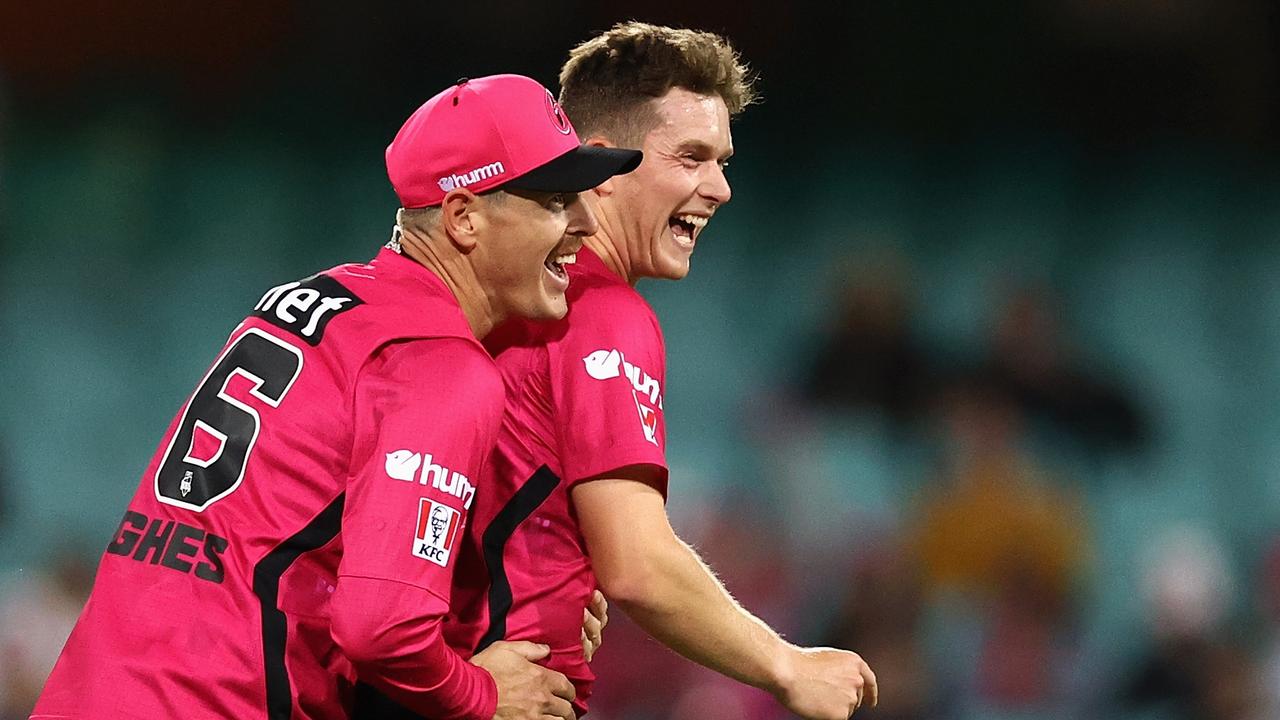 The Sixers all-rounder was one of the revelations of the opening round and his Round 2 break even of -41 is he third-lowest in KFC SuperCoach. Kerr is predicted to rise by more than $100k in the next two rounds by SuperCoach Plus, although that relies on crazy projected scores of 177 and 120. If he scored around his Round 1 average of 63, which is much more likely, his price would still rise significantly. His role seems assured until Ben Dwarshuis returns, bowling at least 2-3 overs as a left-arm seamer and batting at No.8. Don’t expect many batting points but he’ll make KFC SuperCoach teams a serious profit if he can replicate his Round 1 figures of 2-6 and 2-15. Scorchers seamer Kelly would have been one of the best unique picks in Round 1, when he took 4-28 against the Heat. Kelly was also selected in 2.4 per cent of KFC SuperCoach teams. With Jhye Richardson in the Ashes squad, Kelly’s role as the third seamer alongside Jason Behrendorff and Andrew Tye seems safe. The Scorchers showed their hand in Round 1 when they only used five bowlers, including spinners Ashton Agar and Peter Hatzoglou. Kelly snared several lower-order wickets which are crucial to KFC SuperCoach. Kelly jumped from $101k to $122k and is only going to become more expensive between now and Perth’s Round 4 double. Xavier Bartlett made a big impact with the bat in Round 1.

An enormous start for the Heat seamer, who ranked fourth for Round 1 points behind Henriques, Stephen O’Keefe and Josh Philippe. Bartlett took a wicket against the Thunder and Scorchers but it was his batting which helped launch him into triple figures. He scored 34 not out from 25 balls against Perth and 26 not out from 18 balls against the Thunder, carrying his Queensland grade cricket form with the bat into BBL11. Brisbane Heat has a bye in Round 2 of KFC SuperCoach, so Bartlett won’t start generating money until Round 3. But with a break even of -33 and the Renegades up next, Bartlett still looms as a great buy at $120k. Based on SuperCoach Plus projections, coaches who want him for Brisbane’s Round 6 double could pay more than $160k.

Six others to have on your radar:

KFC SuperCoach BBL: Top trade targets for Round 2SuperCoach Plus: Scary signs for teams without SamsBBL late mail: Dre Russ to be unleashed, Finch out again